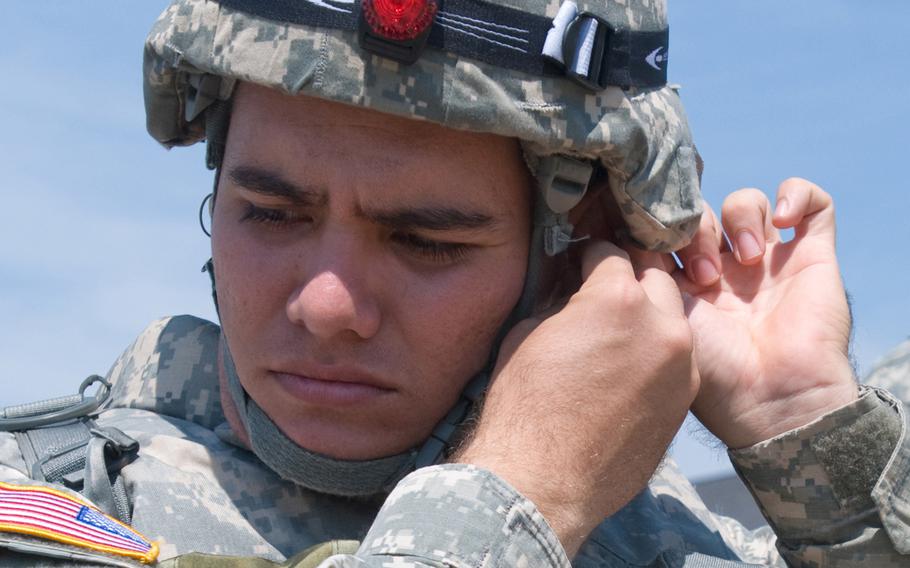 Spc. Coca Temoananui, assigned to the 311th Signal Command, puts in ear protection prior to a helicopter flight in 2012. (Debrah Sanders/U.S. Army)

AUSTIN, Texas — Hundreds of pages of court documents were unsealed last week in a class action lawsuit against 3M regarding allegedly faulty earplugs it sold the military for use by service members in the Iraq and Afghanistan wars.

The documents, made public April 20 by a federal judge in Pensacola, Fla., include emails, depositions, memos and receipts related to the Defense Department’s mass purchase of earplugs from the company between 2003 and 2015. They provide a glimpse into the case that now includes claims from more than 140,000 veterans.

“3M peddled these earplugs to the public and the United States military despite knowing they were dangerous and defective, perpetrating an ongoing fraud on our country and its citizens,” the plaintiffs’ lead counsel said in a statement. The lead counsel includes Bryan Aylstock of Aylstock Witkin Kreis & Overholtz PLLC; Shelley Hutson of Clark, Love & Hutson GP; and Christopher Seeger of Seeger Weiss LLP.

The “combat arms earplug, version 2” featured a dual-protection design. With the yellow end inserted into the ear, the wearer could still hear low-level sound, while inserting the olive-green end would offer the protection of a traditional earplug.

The lawsuit against 3M claims that the St. Paul, Minn.-based company knew from testing that the earplugs were too short to fit properly into an ear canal and could loosen in a way that was imperceptible to the wearer. It also claims that some of the testing results shown to the military before the purchase were done with a modification to the earplug that the military was not told was required to achieve optimal protection.

Instead, the military was given information to show that the modification was for people with very large ear canals, the lawsuit says.

Other testing results presented were conducted before the earplugs were shortened to fit into a carrying case, according to court documents.

Many veterans who wore the earplugs suffer from hearing loss and tinnitus, or ringing in the ears, according to the lawsuit.

The now-public documents show that the earplugs accounted for 5% of 3M’s U.S. revenue within its hearing protection business and 20% of its operating income, in part because the earplugs cost 85 cents to make, but were sold for $7.63. An internal email from 3M states that the company had “no data” on the current version of earplug being sold to the military.

In its defense in court records, 3M has said the earplugs were made to the government’s specifications and that all test results, good and bad, were shared with the military.

In a statement regarding the unsealing of the court documents, 3M denied the product was designed defectively and caused injuries.

“We will vigorously defend ourselves against such allegations,” according to the statement.

3M designed the earplugs “in close coordination” with the military, and the earplugs’ design reflects the “direction and feedback of individuals acting on the military’s behalf,” according to the statement.

“3M has great respect for the brave men and women who protect us around the world, and their safety is our priority. We have a long history of partnering with the U.S. military, and we continue to make products to help protect our troops and support their missions. We take very seriously our work with the U.S. government and continue to be committed to providing the best quality products at fair prices,” according to the statement.

In July 2018, the Justice Department announced 3M agreed to pay $9.1 million to resolve allegations that it knowingly sold the earplugs to the military without disclosing defects that hampered effectiveness. That lawsuit was filed through the whistleblower provision of the False Claims Act, according to a Justice Department release announcing the agreement.

Following that decision, a flurry of lawsuits were filed by veterans who wore the earplugs and now suffer from hearing loss. Those claims were combined into the mass tort case now churning through the legal system. In a mass tort case, each plaintiff is treated as an individual instead of as a group, such as in a class action lawsuit.

The case is expected to get a trial date in 2021 before federal Judge M. Casey Rodgers in the U.S. District Court of the Northern District of Florida.

“3M’s ‘government made me do it’ defense fails on numerous grounds and should be denied by the court,” lead counsel said in their statement. “We will continue to hold 3M accountable on behalf of the 140,000 servicemembers, veterans and civilians who suffer from hearing damage due to these defective earplugs.”