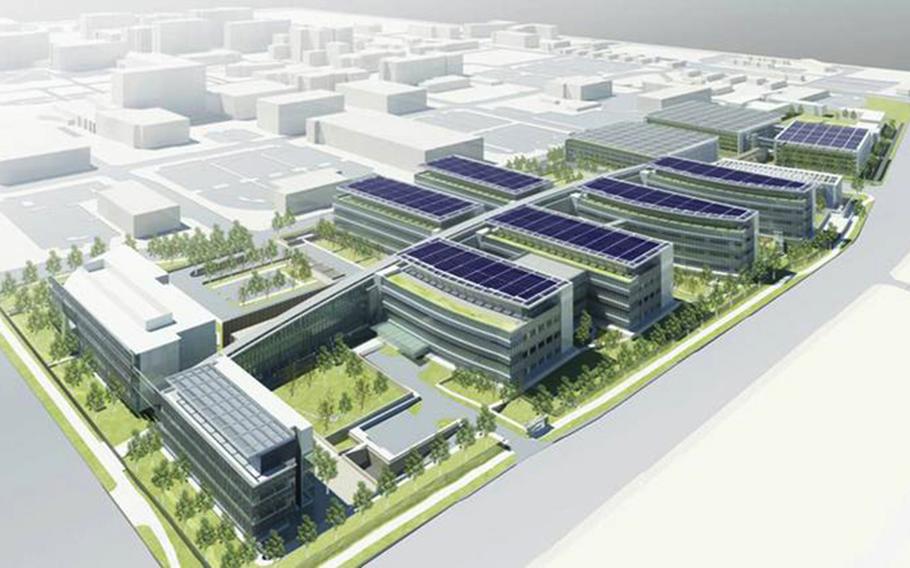 An artist's conception of the VA hospital in Aurora, Colo., which is estimated to be more than $1 billion over budget. (VA)

WASHINGTON — Leaders behind a plan for a new Department of Veterans Affairs hospital in Aurora, Colo., agreed to a grandiose design and ignored repeated, early warnings about the costs, driving it into financial failure, according to a report issued Wednesday.

The VA’s internal watchdog released findings from a yearlong investigation of the Aurora hospital, which has taken 20 years to develop and is expected to cost $1.7 billion – more than double the budget approved for the facility before breaking ground in 2009 and a huge leap from original estimates of $328 million.

Inspectors also discovered that one top official withheld information about the cost while testifying to Congress – leading some lawmakers to call for criminal charges.

“We identified major points of failure that encompass a series of questionable business decisions by VA senior officials,” the 82-page report, compiled by the VA inspector general, states. “The deficiencies … have cost taxpayers hundreds of millions of dollars in increased project costs and prevented veterans from having the use of a new medical center at an earlier time.”

This is the third review of the Aurora hospital, which Rep. Jeff Miller, R-Fla., the chairman of the House Committee on Veterans’ Affairs, has called the “biggest construction failure in VA history.”

In response to the report, the VA maintained its earlier stance that the employees at fault for the delays and cost overrun retired before a review by an internal body, the Administrative Investigations Board, was completed last year.

Glenn Haggstrom, the construction chief on the project, knew the hospital would massively exceed its budget but withheld that information when questioned during congressional hearings in 2013 and 2014, the latest report states.

By the time he testified at those hearings, Haggstrom knew the VA did not have enough funding to complete the project and had told another VA official to keep quiet about cost estimates.

Haggstrom retired in 2015 during the AIB investigation.

Miller is asking the Justice Department to determine whether perjury charges against Haggstrom and others are warranted.

Coffman responded to the IG report with a letter, saying he was disappointed that inspectors didn’t include any talk of criminal referrals. If charges aren’t appropriate, Coffman said, he wants the inspector general’s office to explain why.

“I believe the department and its various congressional witnesses knowingly painted an inaccurate picture of the Aurora project in its representations to Congress in an effort to avoid criticism, embarrassment, and ultimately, accountability,” his letter states.

Miller also called on the VA to “immediately” fire Stella Fiotes, executive director of the department’s Office of Construction and Facilities Management. The inspector general’s report does not address Fiotes’ involvement, but Miller said she “presided over much of the project’s mismanagement.”

Miller has previously criticized the VA for not firing anyone for the cost overruns. Deputy VA Secretary Sloan Gibson said last year that he was prepared to fire one executive -- VA attorney Phillipa Anderson -- but she retired during the investigation.

“To this day, the department’s handling of the replacement Denver VA medical center continues to be a case study in government waste, incompetence and secrecy,” Miller said in a written statement. “It’s well past time for the department to fire all of those responsible for botching this projects.”

Earlier this month, the House Committee on Veterans’ Affairs voted to subpoena from the VA all supporting evidence used in the internal investigation report, which has not been made public. The subpoena gave the VA until Sept. 28 to respond.

The design for the 1.2-million-square-foot facility – many narrow, three-story buildings – was complex and expensive, limited the potential for expansion and could be challenging for veterans to navigate, according to the report.

A project consultant called the layout “unusual” and said it more closely resembled a shopping mall than a hospital.

It includes a 1,100-foot concourse with dining area, retail space and a coffee shop. There were also special additions, such as stones for paving, to convey a sense of being outdoors. Designs also included custom-made glass and custom walls and floors.

“The design overly focuses on aesthetic features without adequate regard for associated costs or construction complexities,” the report said.

Senior VA officials disregarded warnings of rising costs, the report states. They were “indecisive” about the initial design, ignored internal and external warnings about the budget and missed opportunities along the way to change aspects of the design to save money, the report said.

There was also “gross mismanagement” of staff levels at the site, with too few contractors and engineers.

The VA discovered the need for a new medical center in the 1990s because of an increase of veterans around Denver. The current Denver VA Medical Center, built in 1951, was aging and inadequate.

Construction on the Aurora hospital is expected to be complete in January 2018. Outfitting the facility will take an additional six months and $315 million after construction, the report stated.

“This means veterans will not likely be served by a fully functioning facility before mid-to-late 2018, or almost 20 years after VA identified the need to replace and expand its aging facility in Denver.”