‘Eventually the thing did fly’: Vietnam pilot to receive Medal of Honor 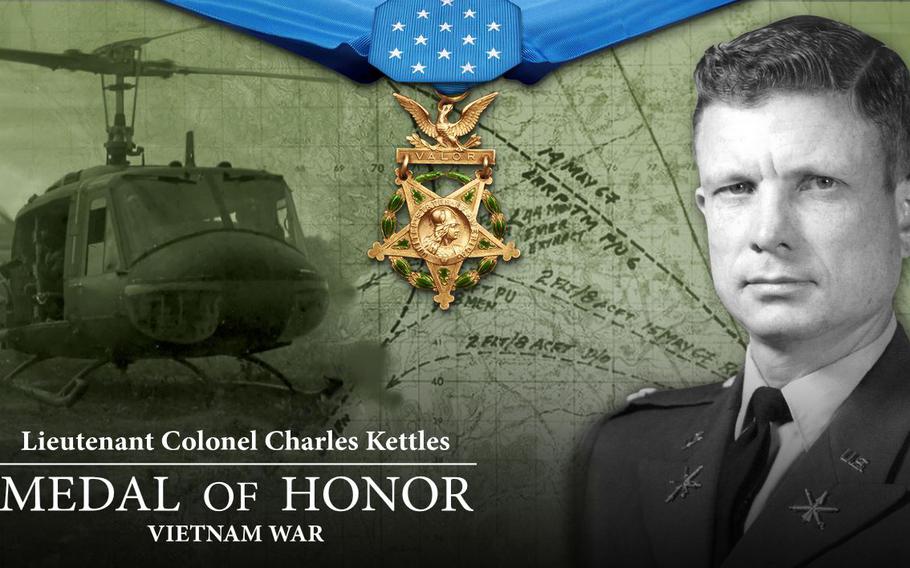 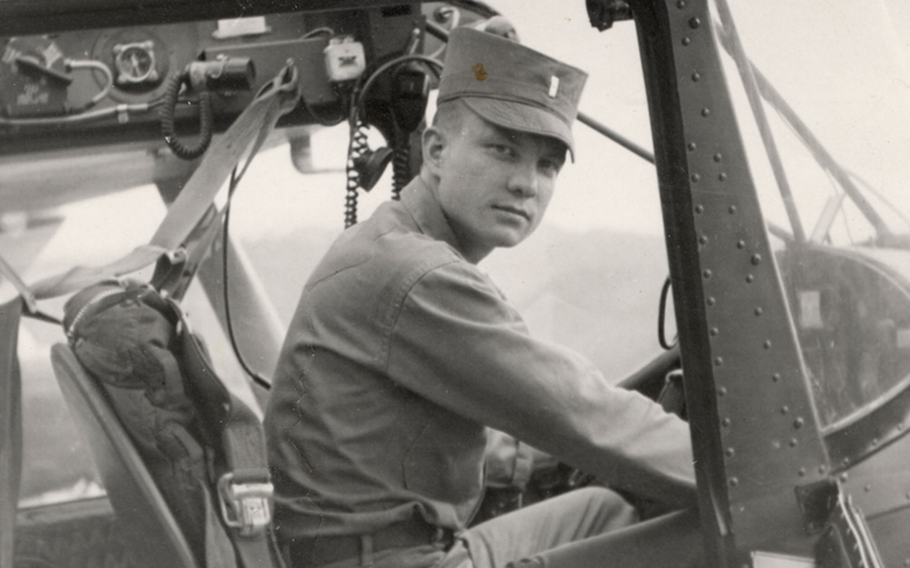 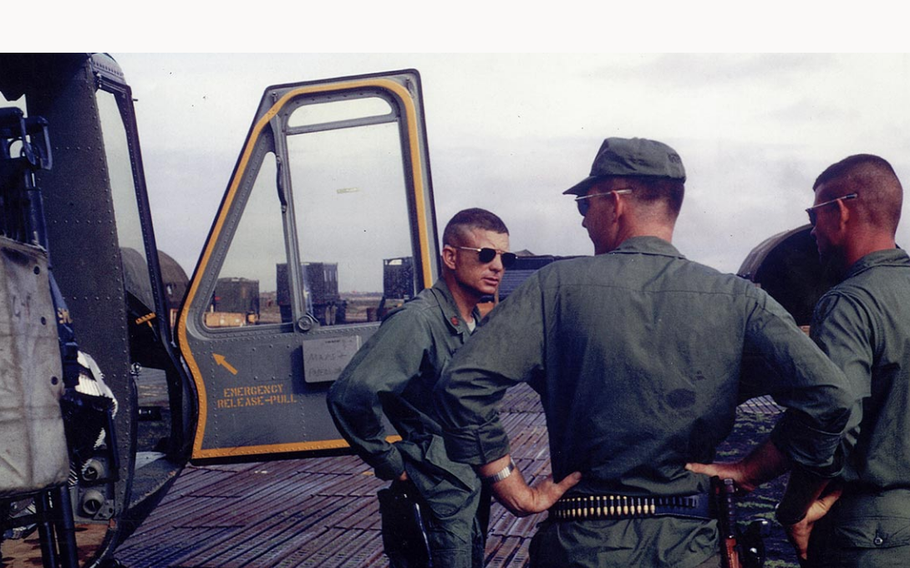 Charles Kettles will be awarded the Medal of Honor for conspicuous gallantry during the Vietnam War. (U.S. Army) 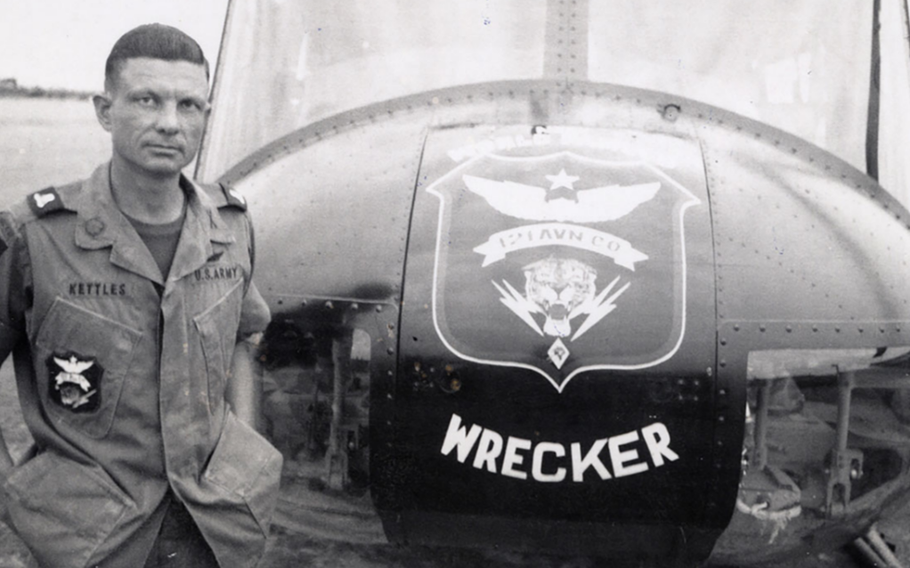 WASHINGTON – Charles Kettles knew the eight troops climbing aboard his helicopter would overload it, potentially grounding them amid North Vietnamese machine gun and mortar fire.

As bullets raked the UH-1D “Huey” and shrapnel blew out a section of its windshield, Kettles made a long slow takeoff, piloting the last group of men out of an ambush near Duc Pho, Vietnam in 1967.

For his combat heroism, the 86-year-old Kettles, a retired Army lieutenant colonel and former flight commander, will now receive the nation’s highest military award, the Medal of Honor, during a White House ceremony scheduled for next month. The award is an upgrade from the Distinguished Service Cross as a result of support from Michigan lawmakers.

During the 1967 mission, about 80 soldiers with 1st Brigade, 101st Airborne Division launched an assault and were surprised by enemy forces along a ridgeline.

“They were caught in an ambush, a bad scene,” said Kettles, who retired from the Army in 1978 and now lives in Michigan. “A few hours after they were inserted, they got pretty well mauled over.”

Kettles, who spoke about the mission during a recent interview with Stars and Stripes, was a flight commander assigned to the 176th Aviation Company, 14th Combat Aviation Battalion. He was called up to lead a platoon of Hueys in support of the soldiers, who had requested additional forces. His helicopters made multiple flights to the battle site and ferried back wounded and dead.

“Near the end of the day, things didn’t get any better,” Kettles said.

The battalion commander called for all remaining troops to be extracted, including soldiers from Kettles’ platoon who were trapped when their helicopter had been destroyed in a landing zone.

Kettles was down to one serviceable helicopter and had to call up another unit from nearby to assist.

“I should have had eight helicopters and I ended up with a net of six, but that is all we had,” he said.

The helicopters went in to extract the last of the remaining soldiers and loaded up. As they flew away, Kettles had just one infantry soldier on his Huey. The others had been loaded up first.

“We lifted up and went out and started back toward Duc Pho at about 1,000 feet,” Kettles said. “Then we were informed that there were 8 troops who didn’t get on helicopter.”

The prospects for a rescue were grim. The support artillery had gone quiet and the fighter jets had left the scene. Kettles knew his D-model Huey lacked the kind of lift power that could guarantee they would get back off the ground with an additional 8 soldiers on board.

Kettles took the controls of the helicopter from the copilot and turned back toward the site of the ambush.

As they landed, the infantry soldiers immediately began climbing aboard – suddenly they were hit by North Vietnamese mortar fire.

“Shrapnel took out part of the left and right windshield and chin bubble where I was,” Kettles said. “Apparently, the shrapnel went between my seat and the copilot’s seat.”

Several of the soldiers were wounded. Later, the crew would find about 30 holes were enemy bullets pierced the aircraft.

“The helicopter began fishtailing violently to the left and right,” Kettles said. “One of the grunts flew out and caught a skid.”

The other soldiers pulled the hanging man back in, but the Huey was still badly overloaded and the rotor blade began to lose speed. To get the men out, Kettles would have to execute a running takeoff, flying slow and low over a long, open space.

As enemy fire continued, Kettles lowered the Huey’s nose skid to nearly touch the ground and flew along a dry riverbed.

“Eventually the thing did fly and came out with a rather shallow departure,” he said.

Kettles, who was 37 years old at the time, was awarded the Distinguished Service Cross for his heroism. A push from lawmakers in Kettles’ home state of Michigan sought to upgrade his award.

Rep. Debbie Dingell, D-Mich., said Kettles went “above and beyond the call of duty during one of the darkest times in our nation’s history.”

Too often Vietnam servicemembers were not celebrated or treated with respect, Dingell said in a released statement.

“These individuals fought for our country and put their lives on the line and because Lt. Col. Kettles turned his helicopter around and braved enemy ammunition and shell fire, he saved the lives of 44 men,” she said.

Kettles was already considered a local hero in Michigan, where he is featured in a museum exhibit by the Ypsilanti Historical Society.

“He is a great guy, he is just marvelous,” said Alvin Rudisill, the society president.

The White House announced Tuesday that he will receive the Medal of Honor.

Kettles will be the 260th recipient from the Vietnam War, and only its 54th living recipient, according to the Congressional Medal of Honor Society.

The last service member to receive the award was Chief Edward C. Byers, Jr, a Navy SEAL involved in a hostage rescue in Afghanistan in 2012. He received the award in February.

Stars and Stripes reporter Alex Horton contributed to this story.