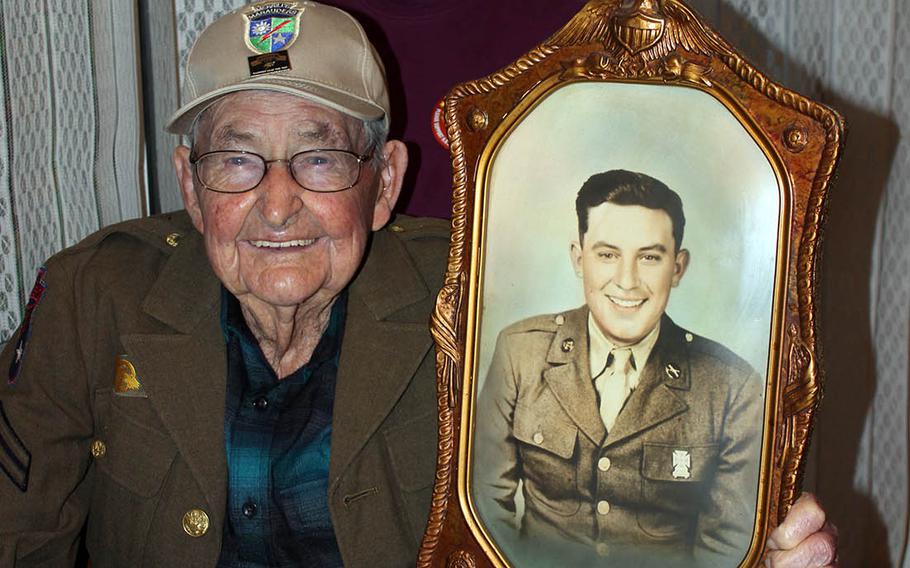 James Richardson, 99, a member of the famed Merrill's Marauders in Burma during World War II, poses with his daughter, Judy Robinson, in February 2020. He holds a photo of his brother, J.C., who was killed in France during the war. (James Richardson)

James E. Richardson, one of only eight living veterans of the famed Merrill’s Marauders from World War II, died Sunday in Knoxville, Tenn., at the age of 99.

Richardson had returned about a week before Christmas from a hospital stay to his home in Jacksboro, Tenn., where his health had been steadily improving, his daughter Judy Robinson said in a statement issued Wednesday. She and her husband Larry were his live-in caregivers.

“On Christmas day, he suddenly got sick that evening, and I took him back to the hospital,” Robinson said. “My brother was with him when it happened.”

The Marauders were named for Brig. Gen. Frank Merrill, who led the Army unit as it fought behind Japanese lines in Burma during the war.

The unit’s ultimate mission was to capture the Myitkyina airfield in northern Burma, which they did May 17, 1944, after a 1,000-mile trek over the Himalayan foothills, through jungles and enemy resistance. But more damaging than the Japanese enemy was the disease, exhaustion and malnutrition that winnowed their ranks to fewer than 200 by the time they seized the airfield.

On Oct. 17, the nearly 3,000 men of the 5307th Composite Unit, as the Marauders were formally known, were awarded the Congressional Gold Medal “in recognition of their bravery and outstanding service in the jungles of Burma during World War II.”

The medal also honors the more than 2,000 replacements flown in to join the 5307th to hold the airfield and capture the town of Myitkyina.

With Richardson’s death, only seven Marauders are known to be living, according to Jonnie Melillo Clasen, daughter of Vincent Melillo, a Marauder who died in 2015 at age 97. She serves as an informal liaison to the still-living Marauders and their families after the group of surviving veterans grew too old and too few to maintain an association and plan reunions.

James Eubaun Richardson was born July 22, 1921, one of seven brothers — six of whom served in the armed forces during World War II. All returned from the war but John “J.C.” Richardson, who was killed in France on D-Day and is buried there.

Richardson was one of the few Marauders who made it all the way to the capture of the airfield, though he was wounded by a gunshot in a shoulder. He received a Bronze Star for his individual valor during combat.

He returned to the United States from India in December 1944 and was stationed at Camp Rucker in Alabama at the time the war ended. He was discharged in October 1945.

He ran Richardson’s grocery at Jacksboro Station from 1961 to 1975 and after retirement kept busy by volunteering with the Salvation Army and at East Jacksboro Baptist Church, where he was a lifelong member.

He was preceded in death by his wife, Jewell Richardson, and is survived by four children, three grandchildren and three great-grandchildren.