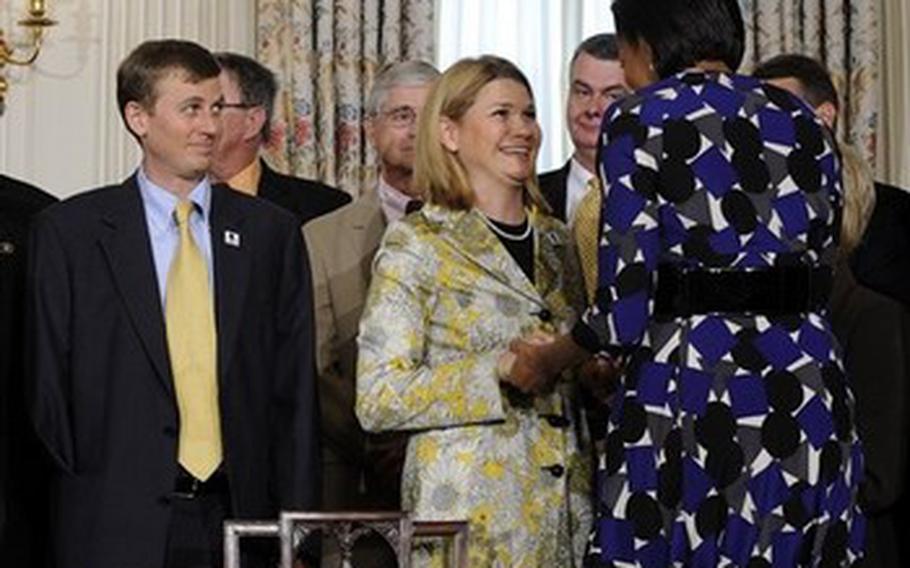 WASHINGTON &mdash; A North Carolina couple who have been lobbying for three years to help military family caregivers stood alongside President Barack Obama on Wednesday as he signed legislation for which they fought.

Most important for those such as Ted and Sarah Wade of Chapel Hill, N.C., the law will give family caregivers stipends and training for caring for wounded family servicemembers.

Ted Wade joined the Army's 82nd Airborne Division in 2000, and later served both in Afghanistan and Iraq. His Humvee was hit by an improvised explosive device in February 2004. Wade lost part of his right arm and was in a coma for more than two months.

Wade emerged from his coma, but with a traumatic brain injury. His wife, Sarah, became his main caregiver. She eventually had to leave school and her job to care for him, and she began fighting for more attention both for Ted and other family caregivers.

"Needless to say, the long term financial challenges faced by the care providers of our severely injured service members are daunting," she testified to Congress in September 2007.

The couple became regular visitors to Capitol Hill, meeting with legislative staff and speaking repeatedly in congressional testimony. Among the offices they visited regularly was that of Sen. Richard Burr, R-N.C., who was at the signing ceremony Wednesday.

A year ago, Sarah Wade told Congress that it should do more to coordinate the care for veterans with traumatic brain injury. On Wednesday afternoon, the Wades watched as Obama signed the bill into law at the White House.

"These caregivers put their own lives on hold, their own careers and dreams aside, to care for a loved one," Obama said in his remarks. "They do it every day, often around the clock. As Sarah can tell you, it's hard physically and it's hard emotionally."