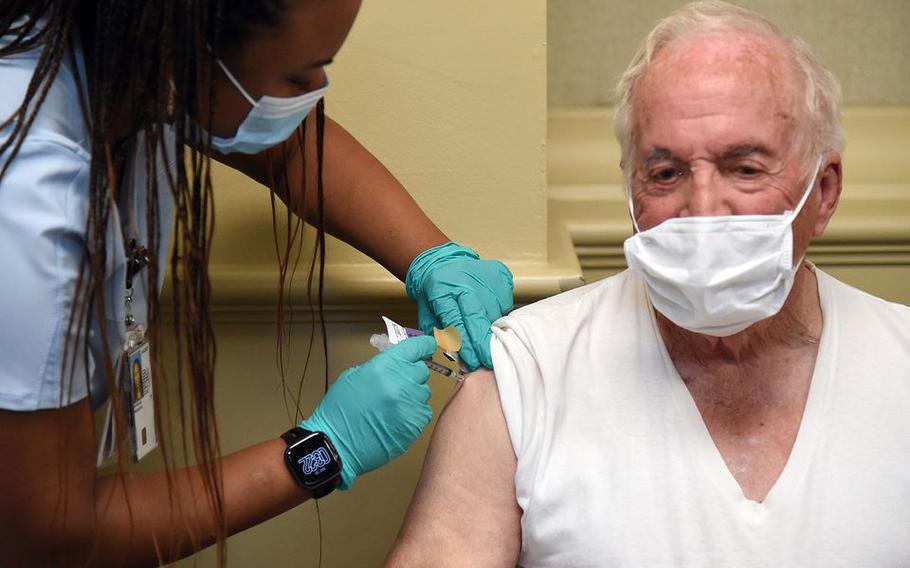 WASHINGTON — As President Joe Biden’s team took over leadership of the Department of Veterans Affairs on Wednesday, the agency was facing its highest death rate since the start of the coronavirus pandemic.

While Biden was being sworn in as the country’s 46th president, the VA reported another grim milestone: More than 8,000 patients had died of the virus — 1,000 of those deaths occurring in the last 13 days. On Thursday, 8,221 veterans were dead, as well as 114 agency employees.

The VA operates America’s largest health care system, and the task of treating coronavirus patients and vaccinating veterans and employees now falls to Biden’s team. On Wednesday, Biden replaced former VA Secretary Robert Wilkie with Dat Tran, a longtime VA employee and the principal deputy assistant secretary for the VA’s Office of Enterprise Integration. In addition, Biden put 12 other people in acting positions and named nine other permanent political appointees to the VA.

The transition is occurring amid the deadliest month for VA patients.

With 10 days remaining in January, there have been more than 1,700 deaths — surpassing 1,300 for December. Twenty-three VA workers have died in January, more than the 16 employee deaths in December.

The VA data doesn’t include all veterans. For example, deaths and cases at the 162 state-run veterans’ homes are not reported to the department. Because of a new law signed this month, the homes will be required to report their data to the VA, which must publicly post the information starting Feb. 4.

VA hospitals reporting the highest active cases of the virus spanned the map, from Southern California and Arizona to Georgia, South Carolina and Texas.

While the death rate continues to increase, the VA is facing a massive effort to vaccinate veterans and health care workers. Richard Stone, acting under secretary of the Veterans Health Administration, told senators last month that it was a “Herculean” task. Stone has been leading that effort, and Biden’s administration announced Wednesday that he would stay in the role, at least temporarily.

As of Thursday, the VA had administered at least one dose of the Pfizer or Moderna vaccines to more than 473,000 people, including 283,925 veterans and 219,940 employees. But it has millions more to go. More than 9 million veterans are enrolled in VA health care, and the department predicted that 7 million of them could seek a vaccine. The VA also employs 400,000 people, including 350,000 health care workers.

Biden is attempting to quicken the nation’s sluggish vaccine rollout and has set the goal of administering 100 million shots in 100 days. About 17 million doses were distributed in the past month.

The president was slated Thursday to sign 10 executive orders regarding the coronavirus pandemic, including one to ramp up vaccinations by creating federal vaccination centers at stadiums, gyms and conference centers. Workers from federal agencies and the military are expected to staff them.

“COVID-19 has put enormous pressure on America’s veterans and on the Veterans Health Administration that is charged with providing and facilitating top-notch care for them,” a summary of the plan reads. “To account for increased usage as many veterans have lost access to private health insurance, higher overall costs, and other pandemic-related impacts, [Biden] is immediately requesting an additional $20 billion to make sure that veterans’ health care needs can be met through this crisis.”

Stone, when addressing senators in December, asked Congress for more money to handle coronavirus treatment and vaccine distribution. Under the CARES Act, a coronavirus relief package approved by Congress in March, the VA received $17.4 billion. As of December, it had spent about $8 billion and was on track to use the rest by the end of the fiscal year, Stone said at the time. He predicted unforeseen costs with distributing and administering vaccines.

The VA released a vaccination strategy in December. It first started vaccinating residents and staff of its long-term community living centers and spinal cord injury centers. It then planned to shift focus to vaccinating VA employees who treat coronavirus patients, and then to veterans and staff in nursing facilities that don’t yet have access to vaccines.

The department then planned to vaccinate health care workers who aren’t in coronavirus units, as well as other hospital employees, such as police, food services workers and administrative staff. All other VA essential workers, as well as homeless veterans, patients on dialysis, organ transplant patients and veterans undergoing chemotherapy, are next on the list.

Last, the VA will start vaccinating patients based on age, with those 85 and older going first. During this phase of vaccinations, the VA plans to prioritize veterans who have high-risk conditions, such as cancer, obesity, diabetes or heart disease. Black, Hispanic and Native American veterans will also be prioritized.

It remained uncertain Thursday where the VA was in its plan and whether Biden’s administration would change it.