At Warrior Games, competitors battle in name of recovery, kinship 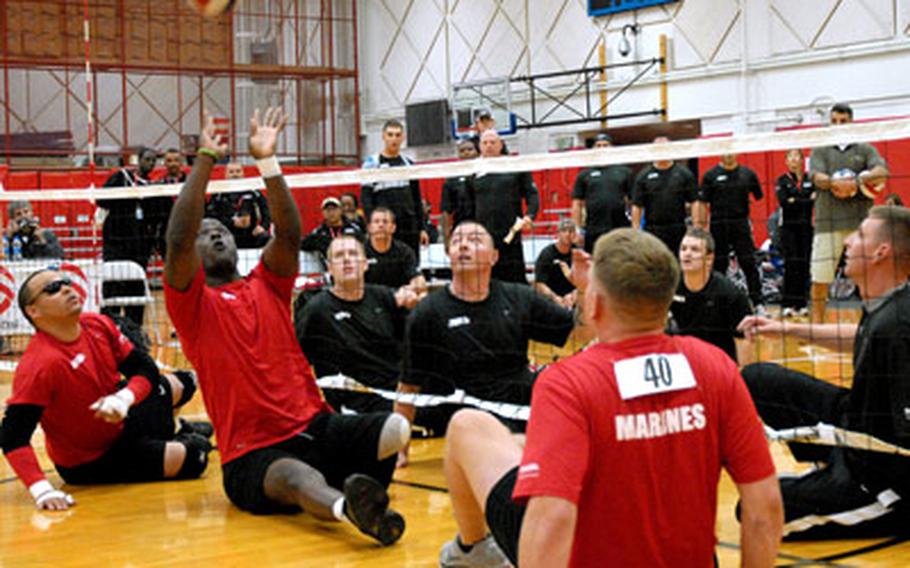 Buy Photo
Gunnery Sgt. Marcus Wilson sets the ball to a teammate during a sitting volleyball game last week at the Warrior Games in Colorado Springs, Colo. He wears a rubber bracelet that says "courage," and over the last two and half years has become a touchstone for him. (Megan McCloskey / Stars and Stripes)

Buy Photo
Gunnery Sgt. Marcus Wilson sets the ball to a teammate during a sitting volleyball game last week at the Warrior Games in Colorado Springs, Colo. He wears a rubber bracelet that says "courage," and over the last two and half years has become a touchstone for him. (Megan McCloskey / Stars and Stripes) 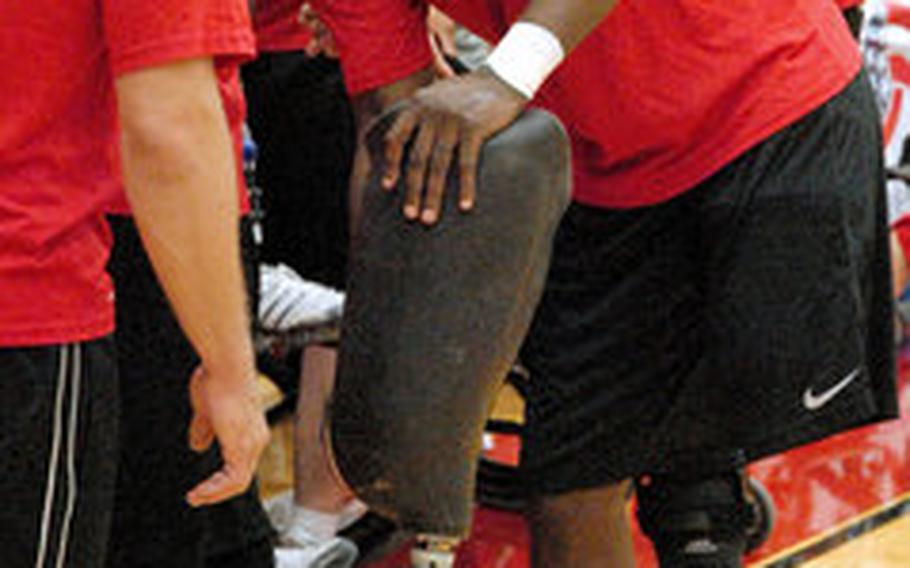 Buy Photo
Gunnery Sgt. Marcus Wilson takes off his prosthetic leg before the gold medal match Thursday against Army in sitting volleyball at the Warrior Games in Colorado Springs, Colo. The inaugural Games brought together nearly 200 wounded servicemembers to compete in Paralympic-style events. He wears a rubber bracelet that says "courage," and over the last two and half years has become a touchstone for him. "I had this thing when I was still really weak at the time, and didn't think I'd be able to do anything," he said. "Every time I look at it now I know where I came from and where I am now." (Megan McCloskey/Stars and Stripes) 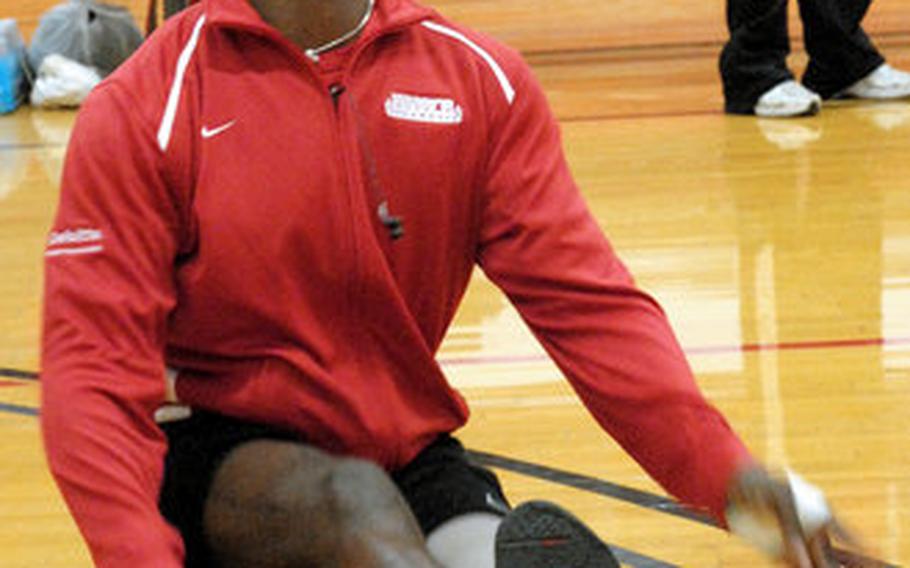 Buy Photo
During warmups before a sitting volleyball game, Gunnery Sgt. Marcus Wilson looks up at a volleyball coming his way. Wilson's Marine team took gold in the event at the Warrior Games in Colorado Springs, Colo. He wears a rubber bracelet that says "courage," and over the last two and half years has become a touchstone for him. "I had this thing when I was still really weak at the time, and didn't think I'd be able to do anything," he said. "Every time I look at it now I know where I came from and where I am now." (Megan McCloskey/Stars and Stripes) 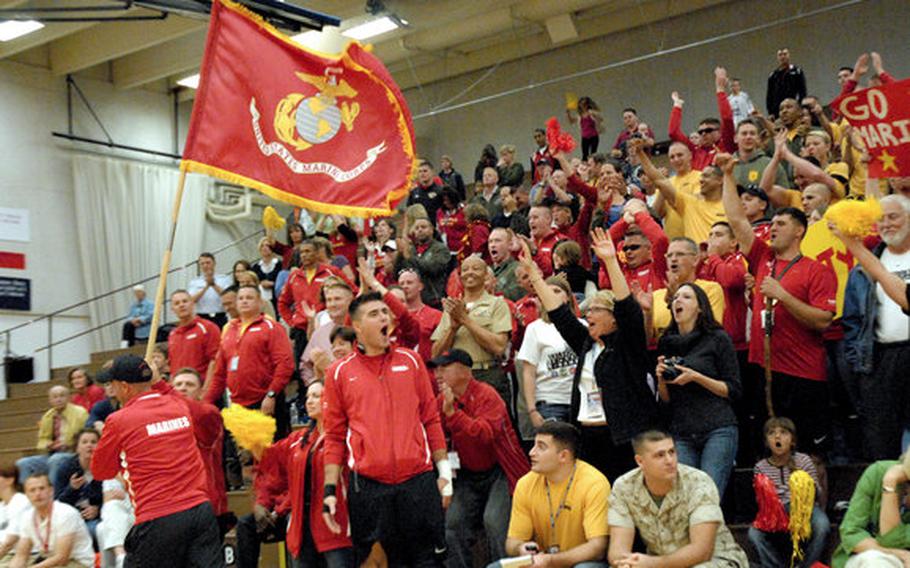 Buy Photo
To pump up the Marines during the sitting volleyball gold medal game against Army, a Marine runs the service's flag past the crowd last week at the Warrior Games in Colorado Springs, Colo. (Megan McCloskey/Stars and Stripes) 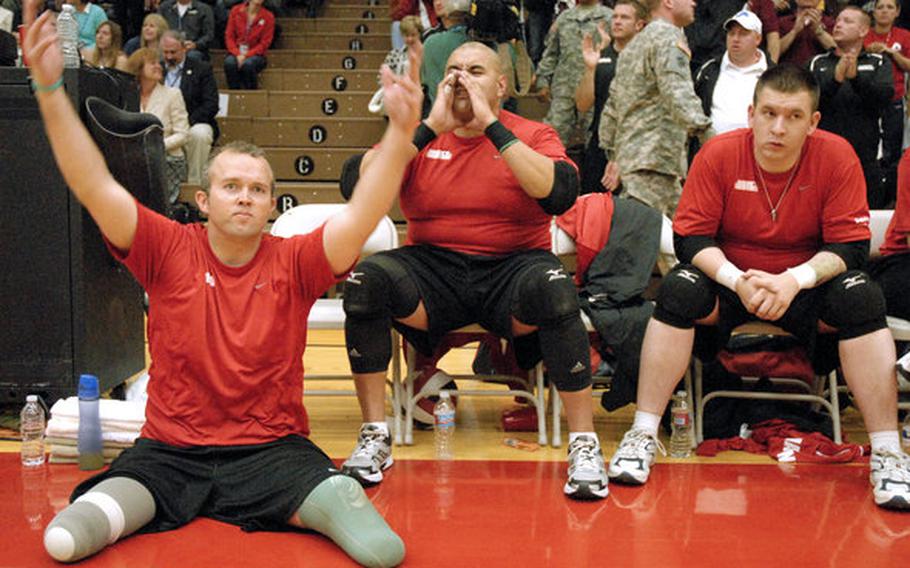 Buy Photo
Former Sgt. Bradley Walker, left, a member of the Marine sitting volleyball team, motions to the crowd to get excited as the Marines worked to win gold against Army last week at the Warrior Games in Colorado Springs, Colo. Walker, a combat engineer, was attached to Wilson's unit in Haditha, Iraq, and was hit by an IED two weeks after Wilson was. (Megan McCloskey/Stars and Stripes)

COLORADO SPRINGS, Colo. &mdash; Gunnery Sgt. Marcus Wilson recently watched a video of the explosion in Iraq that took his left leg. It&rsquo;s on a jihadist website, set to music.

&ldquo;I didn&rsquo;t sleep for like four days after that because it bothered me so much,&rdquo; he said. &ldquo;I kept looking at it and looking at it. How did I even make it through that? That&rsquo;s how violent and nasty it was.&rdquo;

Not only did he make it through, he thrived.

Last week, the above-the-knee amputee was one of nearly 200 mostly combat-wounded Marines, soldiers, airmen and sailors who represented their services in Paralympic-style events such as wheelchair basketball, swimming and track.

It&rsquo;s all in the name of recovery, using competition to push them to set goals and get their confidence back.

The Marines showed up two weeks early to train, and it paid off. In sitting volleyball, where the long-armed Wilson dominated above the net, they went into the gold medal match against Army undefeated.

&ldquo;He smiles all the time and has fun, but you can&rsquo;t let that fool you,&rdquo; said retired Gunnery Sgt. Angel Barcenas, a double-amputee who is a friend from Walter Reed Army Medical Center in Washington. &ldquo;You don&rsquo;t want to mess with him. He takes care of business.&rdquo;

In late summer 2006, Wilson deployed as a staff sergeant to one of the hottest areas of Iraq.

&ldquo;Pretty much from the day we stepped foot in Haditha it was like the Wild West,&rdquo; he said.

On Nov. 16 &mdash; the day that he would eventually call his &ldquo;alive day&rdquo; &mdash; an IED, or improvised explosive device, detonated beneath his vehicle.

As the smoke cleared, he could see that his lower left leg was just barely attached. Thankful to be alive, he didn&rsquo;t give it much thought beyond: &ldquo;OK, maybe they can stick that back on.&rdquo;

Not until he had been in the hospital in Germany a few weeks &mdash; with two broken arms, a broken left hand, a broken right leg, six broken ribs, five fractured vertebrae, a punctured lung and his left leg partially amputated &mdash; did he learn that he was the sole survivor of the blast. Three other Marines, men he&rsquo;d trained for years, were killed.

When he got to Walter Reed, his left knee still wasn&rsquo;t healing correctly. He told them to cut it off above his knee.

&ldquo;I just wanted to be out of the hospital and to get the rehabilitation process started so I could walk again,&rdquo; he said.

The first day he got home after a five-week stint in the hospital, the 6-foot, 3-inch Marine was 100 pounds lighter and a far cry from his old gym-toned, 210-pound frame, and he fell trying to go from the wheelchair to the bed.

&ldquo;It was a really sorry fall, nothing that hurt me,&rdquo; he said. &ldquo;Mentally, though, it tore me up. That was the point I realized how weak I was and how much I had to work towards to be what I would consider being normal again.&rdquo;

It was his Mom who motivated him after he fell.

&ldquo;She was like: &lsquo;You have three guys who passed away, and you&rsquo;re sitting here on the floor crying like a baby just because you fell out of your wheelchair. Get up,&rsquo;&rdquo; he said. &ldquo;I got up and that was it ... no more feeling sorry for myself.&rdquo;

Sitting volleyball is the favorite spectator sport of the Warrior Games. Before the best-of-three gold medal game, the red and black sides of the crowd are taunting each other.

The net is only about a couple feet off the court, so the players still manage some powerful spikes from the seated position.

The Marines take the first point of the game with a fierce spike, and they keep right on scoring.

Former Cpl. Travis Greene, a double-amputee and the Marines&rsquo; best player, keeps the momentum with a dominant serve, winning six straight points for his team as they roll to a 17-11 lead.

The Marines easily win 25-16, and they collapse in the center of the court in a mess of high fives and back slaps.

Only two months after the explosion, Wilson was able to put on a prosthesis and start trying to walk using two canes.

He could see other people in therapy doing it, and, hell, he&rsquo;d been walking all his life. He thought it should be like riding a bicycle, something you never forget.

&ldquo;That was my attitude. But that&rsquo;s not true,&rdquo; the 33-year-old said.

Instead he fell down a lot. The entire dynamic of taking a step was different now.

He went into his own little world.

&ldquo;I was like my career is over in the Marine Corps,&rdquo; he said. &ldquo;My life as I know it is over. What am I going to do? Never thinking anything like suicide or anything crazy like that, but just where am I going to go from here? What do I do?&rdquo;

It was almost too much to think about, he said.

Barcenas, who lost his legs after stepping on an IED about six months before Wilson&rsquo;s injury, went to visit him early in his recovery. He told him that paranoia &mdash; like thinking the X-ray guy was trying to kill him &mdash; was normal, and then as Wilson got better, he pushed him in that taunting Marine way to keep making strides.

&ldquo;I felt like I was in a hole and he just kind of reached out and slowly pulled me out.&rsquo;&rsquo; Wilson said.

Eventually, Wilson left his depression and the two canes behind.

The Marines are up 1-0 in the best-of-three match against the Army, but the second game is much more even.

They exchange points, with neither team gaining momentum.

Then the Marines put a string of points together and take the lead, 13-9.

Playing in his sweet spot at the net, Wilson stretches up and blocks an opponent&rsquo;s spike. When the ball comes back to him, he spikes it hard to make the score 14-9.

But the Marines can&rsquo;t hang on. The Army starts to make a comeback with strong serving.

Wilson defaults on a serve.

The Marines briefly rally after a timeout, but lose 21-25.

The gold medal will come down to a tie-breaker.

Wilson mellowed after the injury.

&ldquo;I&rsquo;m a lot more laid-back,&rdquo; he said. &ldquo;A lot of stuff I just let go right over my shoulder. I don&rsquo;t even mess with it.&rdquo;

He sold his motorcycle, too.

&ldquo;I used to party all the time and just do all kinds of crazy stuff,&rdquo; he said. &ldquo;I got pulled over one time for doing like 145 in a 50 on my motorcycle. Just an idiot, you know what I&rsquo;m saying? I would never ever even think about doing anything stupid like that anymore. So in that sense I think it&rsquo;s made me a better person.&rdquo;

Two of his children &mdash; 11- and 6-year-old sons &mdash; live with him in Virginia. His 12-year-old daughter lives with his ex-wife. They&rsquo;d been going through a divorce before his deployment. After his injury, they attempted to make it work but ultimately called it quits.

Getting back into the dating scene took about two years.

&ldquo;I was a little afraid to talk to a woman because I didn&rsquo;t know how someone would react,&rdquo; he said. &ldquo;Oh you, you&rsquo;re not complete. You&rsquo;re not even a whole man. Part of you is missing.&rdquo;

But he learned that he was more preoccupied with his condition than any women were. Eventually, he fell for a woman who came around Walter Reed often with her two-star boss.

They married and have a newborn son, but now they, too, are getting divorced.

&ldquo;I have no luck,&rdquo; Wilson said, shaking his head. In the fall, he leaves Walter Reed for Camp Lejuene, N.C. He decided to stay in the Marine Corps and fought to continue as a infantryman.

&ldquo;As long as I feel like I&rsquo;ve got something to offer,&rdquo; he said. &ldquo;I&rsquo;m not going anywhere.&rdquo;

With the largest crowd of the Games boisterous and loud, the atmosphere is charged. The first team to 15 points wins the gold.

Wilson gets the first point of the game and is tackled by his teammates.

Again, though, neither side lets the other break away.

At 8-7 in the Marine&rsquo;s favor, retired Sgt. Bradley Walker launches himself backward to keep the ball in play. Greene scrambles to bump it over the net, but the ball goes out of bounds, and the score is tied again, 8-8.

Then something turns on for the Marines. They pull away, allowing Army only one more point.

Wilson scores the winning point in the 15-9 victory, and the celebration is on.

The gold medal is the first of two for Wilson &mdash; he&rsquo;ll win another in basketball &mdash; and it helps the Marines on their path to the overall Champion&rsquo;s Cup.

Wilson takes it all in, but already has his next goals in mind: running a marathon, and deploying to Afghanistan.