A trip back in time: Marine vet, 97, visits origins of his decorated military career 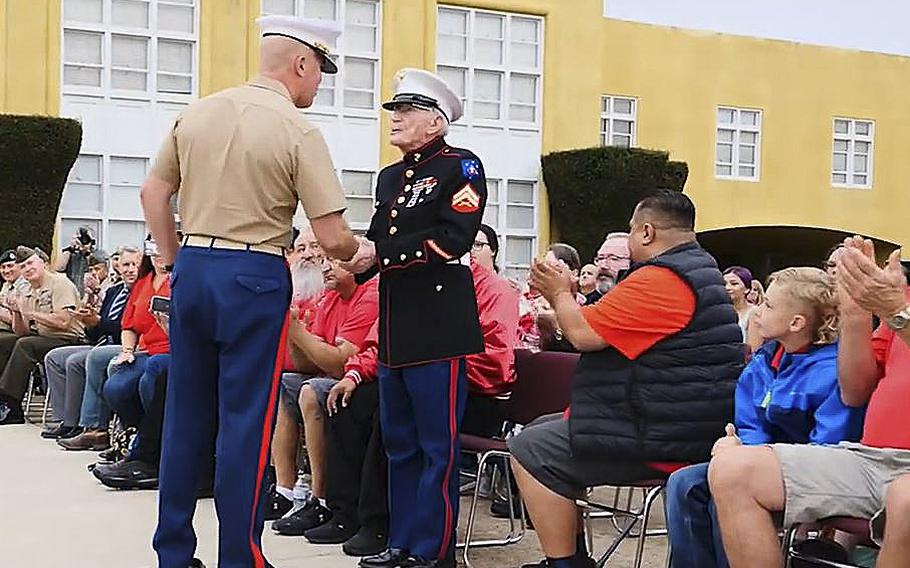 World War II Marine veteran Frank Wright, 97, is honored at Marine Corps Recruit Depot San Diego during an October 2022 event, some 80 years after he enlisted and completed basic boot camp at the installation in 1942. (YouTube)

(Tribune News Service) —  Lodi resident Frank Wright took a trip back in time last month when he returned to southern California to revisit the birth of his military career.

Wright, 97, enlisted with the United States Marine Corps in 1942 at the age of 16 and completed basic boot camp at the Marine Corps Recruit Depot in San Diego.

He fought in battles throughout the Pacific Theater during World War, including at Iwo Jima, where he witnessed the raising of the flag on Mount Suribachi, which has since been memorialized in Joe Rosenthal’s photograph that has become synonymous with victory for American armed forces.

An original member of the Marine Corps’ Raiders special forces unit, Wright was recalled to the depot on Oct. 13 to commemorate his service.

“My mind went back to January in 1942, seeing some of the areas I had been,” Wright said during an Oct. 17 press conference about his trip to San Diego.

“Of course, it has completely changed in that 80 years,” he said. “I had a picture made with the our (sleeping quarters) that I stayed in, and they have them on display in the San Diego area.”

The Marine Raiders are a special operations unit created in 1942 to conduct amphibious light infantry warfare. However, most combat operations during the war saw the Raiders used as conventional infantry.

Wright was assigned to the 4th Raiders unit out of Camp Pendleton, led by Lt. Col. James Roosevelt, son of the president.

“I had the honor of help designing the combat course in San Diego with Col. James Roosevelt, and it brought back memories of what we had done,” Wright said. “We were in standing committee at this time, and I just cant believe its grown so much in the 80 years that I have left.”

There were a total four Raiders units during the war, and all were engaged in heavy combat in the upper Solomon Islands.

On 15 March 1943, the four battalions were organized as the 1st Marine Raider Regiment at Espiritu Santo.

Two additional Raider units were created in early 1944, but because the anticipated need for commando-type units within the Marines had not materialized, they were deactivated on Feb. 1 of that year.

During his service, Wright fought in four major battles, traveled between islands on 11 different Navy ships, was wounded in the stomach by a bayonet while recapturing Guam, and was shot in the chest and arm by machine gun fire on the island of Iwo Jima.

He spent the last six months of his enlistment as a Marine drill instructor training new recruits.

He is believed to be one of the three last surviving members of the Raiders, and penned a memoir about his experiences in 2019 entitled “Battles in the Pacific.”

Born in Arkadelphia, Ark., Wright said he enlisted when he learned the country had been attacked on Dec. 7, 1941.

“I heard over the radio that Pearl Harbor had been bombed,” he said. “I didn’t know where Pearl Harbor was at the time, but I knew that somebody bombed us. I went down to the Post Office to see the different advertisements... the Navy and Marines... and that kind of stirred myself up to be one of those.”

Wright said he ultimately chose to enlist in the Marines because the poster at the Post Office showcased men in their “dress blues,” the attire typically worn during formal events and engagements.

During his trip to San Diego, Wright met General David H. Berger, Commandant of the Marine Corps, and boarded the USS Anchorage.

He was also invited to attend the 2022 Boot Camp Graduation ceremony on Oct. 14, and given a tour of the Marine Corps Recruitment Depot Museum.

In 2006, the Raiders were reactivated when the Marine Special Operations Regiment was renamed the Marine Raider Regiment. It currently consists of 1,512 personnel.

Visit the Lodi News-Sentinel at www.lodinews.com