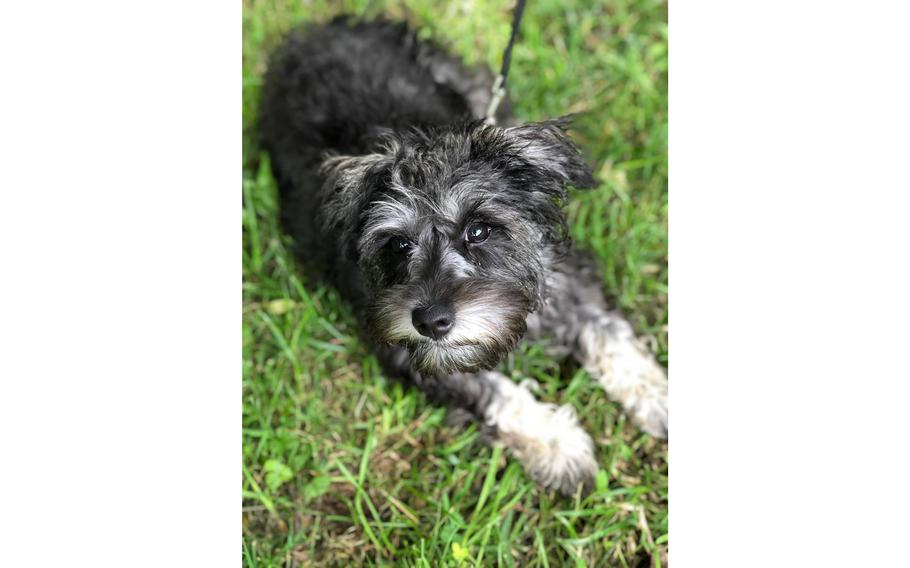 An 89-year-old Army veteran said he “had no choice” but to run 100 yards and beat two pit bulls with a stick as they mauled a North Carolina woman after killing his “loving” miniature schnauzer, Kalee, pictured. (Facebook)

(Tribune News Service) — An 89-year-old Army veteran said he “had no choice” but to run 100 yards and beat two pit bulls with a stick as they mauled a North Carolina woman after killing his “loving” miniature schnauzer.

“I had to,” Dallas Campbell of the rural Enochville community in Rowan County, N.C., told The Charlotte Observer. “I had to lay down afterward, but I had no choice.”

If what he did to save the woman “keeps someone else from getting bit, it was worth it,” he said.

The woman, a family friend, was walking 2- to 3-year-old Kalee on a leash as she did every day at 2 p.m. when Dallas Campbell leaves for cancer-related radiation treatment, his son told the Observer.

On Jan. 6, the pit bulls dashed from a cypress row on Cavin Lane and attacked Kalee then bit the woman in one of her arms and her legs as she clutched the terrified pooch in her arms, retired Air Force Lt. Col. Christoper “Doc” Campbell of Richmond, Va., said.

The woman managed to call Dallas Campbell during the attack, his son said.

“Help me! Help me!” the woman screamed into the phone, Christopher Campbell said.

While on the phone with her, Dallas Campbell walked outside and saw the woman across a field. With a family friend, he ran as fast as he could to the scene, he told the Observer.

One of the dogs “was tearing that woman up, and I had to get it off her,” he said.

He picked up a thin stick and repeatedly swatted the dog, but when the dog finally relented, it returned to attack again, he said.

Dallas Campbell kept hitting the dog with the stick, he said

After a good strike on the dog, both pit bulls finally scampered away, Christopher Campbell said.

The woman walking Kalee spent several days in a hospital. The injuries to her arm alone were worse than wounds he saw while serving in Afghanistan, Christopher Campbell said. She lost part of a foot and faces multiple surgeries on her arms and legs, he said.

Animal control returned to the scene on Saturday, after Christopher Campbell said he posted about the incident that morning. He said the dogs were seized, but animal control hasn’t told the family if the dogs were euthanized or are still impounded.

Rowan County sheriff’s Major John Sifford referred questions about the case to animal control, but no one at the department returned phone messages left by the Observer.

In the 1950s, Dallas Campbell served in a branch of the Army that was the precursor to the present-day National Security Agency, his son said.

Long after his service and back home in Rowan County in 1965, he and others founded Enochville Fire & Rescue — less than a quarter mile from the Jan. 6 pit bull attack.

Dallas Campbell told the Observer he served as Enochville fire chief for 30 years.

From 1977 until he retired in 1996, Dallas Campbell also operated Dal’s Bread and Bolts, a general store started by his father in the 1920s or early ’30s as E.B. Smith’s Grill. The store had a gas pump and a butcher shop outside, Christopher Campbell said.

After retiring, Dallas Campbell still owned the building and leased it.

Christopher Campbell said it took 45 minutes for an ambulance to arrive, despite the attack happening less than a quarter mile from Enochville Fire & Rescue.

The squad doesn’t have an ambulance, fire Chief Taylor Barnes told the Observer on Wednesday. Such 911 calls are routed to Rowan County EMS, he said.

Barnes said Rowan EMS is so short-staffed due to COVID that the agency has had to call in FEMA crews to help.

Rowan County EMS Division Chief T.J. Brown did not respond to a phone message from the Observer on Tuesday.

Referring to the attack by the pit bulls, Christopher Campbell, 62, said his parents “are both heartbroken.”

They had Kalee for two years and loved her gentle nature, he said. Kalee died Friday night at a veterinarian’s, he said.

“She was the sweetest dog,” Christopher Campbell said, mentioning a previous dog his parents had that was more difficult to handle.

“Never met anyone she didn’t love.”