10 years removed from battle, Marine veterans grapple with the worst of the Afghanistan war in new podcast 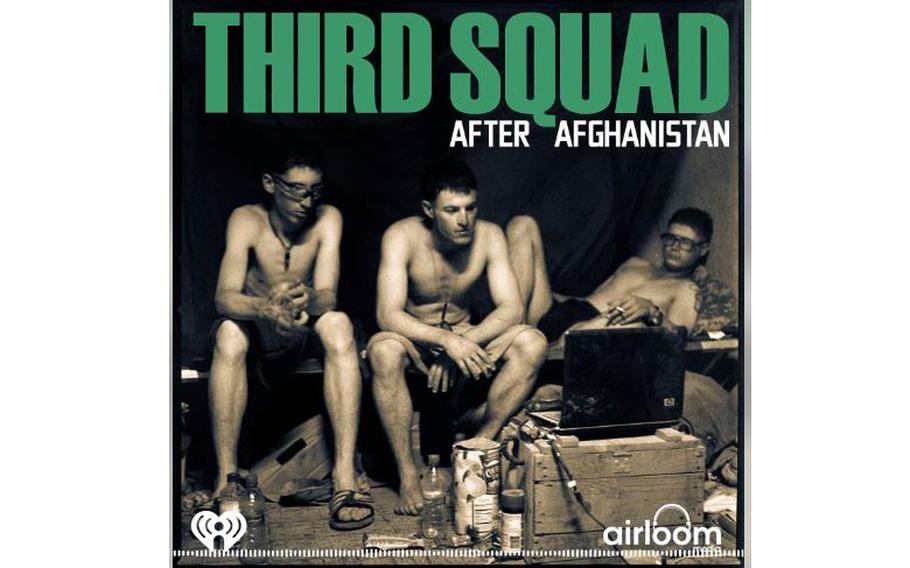 The new podcast “Third Squad” offers an unflinching account of how the realities of war — killing and dying — affect young fighters years after the shooting stops. (Facebook)

SAN DIEGO (Tribune News Service) — Until recently, Manuel Mendoza had a hard time responding when anyone told him, “Thank you for your service.”

Mendoza was just 17 when he signed up for the Marine Corps and 18 when he shipped off to boot camp in 2009. He was assigned to 1st Battalion, 5th Marines at Camp Pendleton and, in 2011, deployed to Afghanistan’s Helmand Province as part of the so-called “Obama surge.” His company was plagued by minefields of improvised explosive devices during that year’s fighting season; half were wounded or killed.

The emotional weight was heavy when he returned home, and the thanks he received from strangers served as awkward reminders.

“It didn’t bother me — I don’t know how I feel about it,” he said in an interview with the Union-Tribune. “It’s one of those things you just don’t know what a good response would be.”

Mendoza, now 30, is one of 10 Marine veterans from his unit featured in the new podcast “Third Squad,” which offers an unflinching account of how the realities of war — killing and dying — affect young fighters years after the shooting stops. In the podcast, the Marines grapple with the moral injuries of their time in combat and how a series of deadly incidents a couple months into their tour sent the men spiraling down a dark path where many said they stopped viewing Afghans as people and started viewing them as targets.

Host Elliott Woods, an Army National Guard veteran of the Iraq War, was embedded with Mendoza’s platoon as a combat correspondent during their 2011 deployment. He recorded the young Marines’ thoughts during that 2011 deployment but said that, at the time, he wasn’t able to tell the story.

“The real story was how it affected them later,” he said in an interview. But, even after 10 years, he said he wasn’t sure the Marines would talk about it.

“A lot of things surprised me but the most was how willing they were,” Woods said. “Ten out of the 11 survivors talked.”

The podcast — underwritten in part by San Diego State University — features audio from the Marines in 2011 as they talk about why they enlisted and what they thought about combat, along with their reflections from this past year. Woods’ follow-up interviews were conducted in March and April 2021.

On Thursday — Veterans Day — Woods, Mendoza and another “Third Squad” veteran, John Bohlinger, recounted some of what they went through in Afghanistan during a live event at the USS Midway Museum in San Diego.

The unit knew they were heading for a fight before deploying. The squad they were coming to relieve was also from Camp Pendleton. The so-called “Darkhorse” Marines — 3rd Battalion, 5th Marines — lost 15 Marines during their tour. In March 2011, 1/5 arrived in Sangin, Afghanistan, picking up where Darkhorse left off.

Things were quiet the first couple of months, Woods told the audience Thursday, but after the poppy harvest the Taliban ramped up its resistance in Sangin. Over just a few days, 50 percent of the 40-man platoon was wounded in a series of IED attacks, including the platoon sergeant and other experienced Marines.

The attacks changed how the members of 1st Platoon — which included 3rd Squad — looked at the war and who they were fighting.

“When we got there, we believed in what we were doing, trying to win the support of the local population,” Bohlinger said. “Things changed. It’s a lot to endure, especially (for) teenagers. You lose a lot of friends. It’s a lot to bear.”

It changed his outlook, Bohlinger said, from believing in the mission to “pure rage.”

Mendoza said he felt the shift, too.

“It doesn’t get better,” he said. “You learn to put your mind elsewhere, but the hatred is still there and it leads to a lot of shameful actions driven by that rage.”

On Sept. 15, 2011, just a couple weeks before the unit’s tour was up, a friendly and outgoing Marine in the squad, Cpl. Michael Dutcher, 22, was killed by an IED. The Marines in the squad were shaken by the loss of their friend.

Dutcher had planned on leaving the Marines, going to college and becoming a history teacher. It was Dutcher’s undying empathy toward the Afghan people, Bohlinger said, that pulled him out of the dark place the loss of his friend sent him after the war.

Dutcher told Bohlinger, when asked why he was polite to Afghans, that if it only took being polite to keep his humanity, than that’s what he was going to do.

“I can’t even put into words how important that was and how it instilled in me the very beginning seeds of empathy,” Bohlinger said.

Mendoza, who was wounded in the blast that killed Dutcher, said he carries guilt from that day since he gave the order to Dutcher to take that path that day.

“I don’t forgive myself,” Mendoza said, “but I’ve learned to accept it.”

Mendoza, who lives in Houston, said during an interview Friday that he wasn’t sure about opening up to Woods so long after the events in Sangin. The decision to go public wasn’t easy, he said.

“It was a hard choice,” he said. “Really hard. Especially during the interview. But I’m very glad I did. It gets easier the more we talk about it and accept things.”

The podcast was recorded months before the fall of Kabul and the withdrawal of U.S. forces this past summer. Mendoza said he avoided the news while it was happening — it was too much, he said, until he went home to the Rio Grande Valley in Texas to visit his family and got to talking with an old friend.

“My heart was broken for the people, especially the women in Afghanistan,” he said.

He also said he found a way to reconcile the feeling that all the fighting and loss was for nothing.

“Everything these guys did — the guys that passed away, that didn’t make it home — it was for us,” Mendoza said. “They didn’t do it for the people, they did it for us. It wasn’t a waste.”

Woods he tried in the podcast not to portray the veterans of 1/5 as victims but to tell their stories honestly.

“People who don’t come from a military background have a tough time talking about the complexities of war — the killing,” Woods said. “It’s something rarely talked about in journalistic treatments of war. There’s a deep reverence for veterans in American society that precludes us from looking at the negative effects of war and its aftermath. In these conversations, we just approach these subjects with a more complicated lens — we’re not hiding behind any myths.”

Seventeen Marines from 1/5 were killed in Afghanistan during its 2011 tour. Five of the 12 episodes of “Third Squad” are currently available with new episodes released every Thursday.

Saying veterans have heard all the advice before, he declined to offer any of his own to those also grappling with their experience during the war. However, he hoped they might benefit in hearing their story, since telling it has helped him.

Another benefit of telling his story, Mendoza said, is that other veterans have reached out through Woods with encouragement and advice for the Marines, including one who made a suggestion on one specific issue.