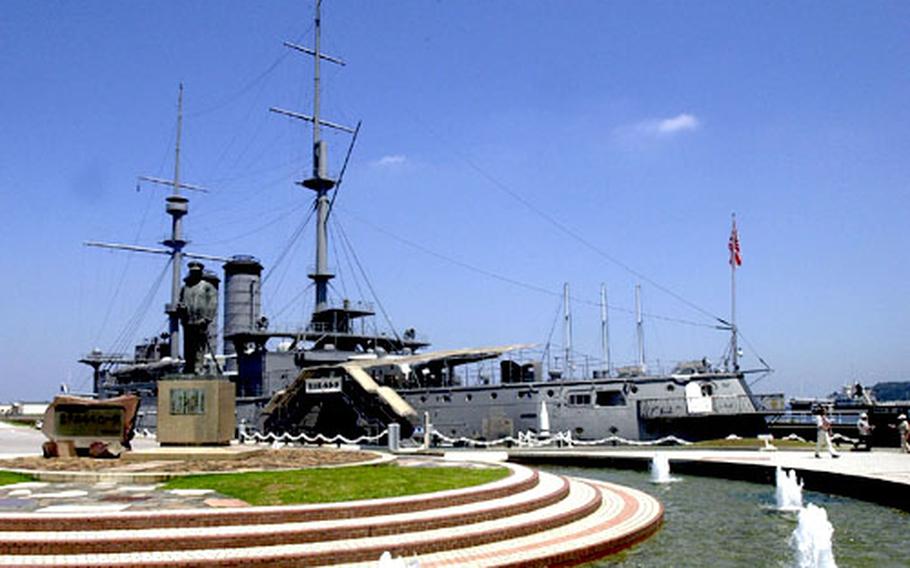 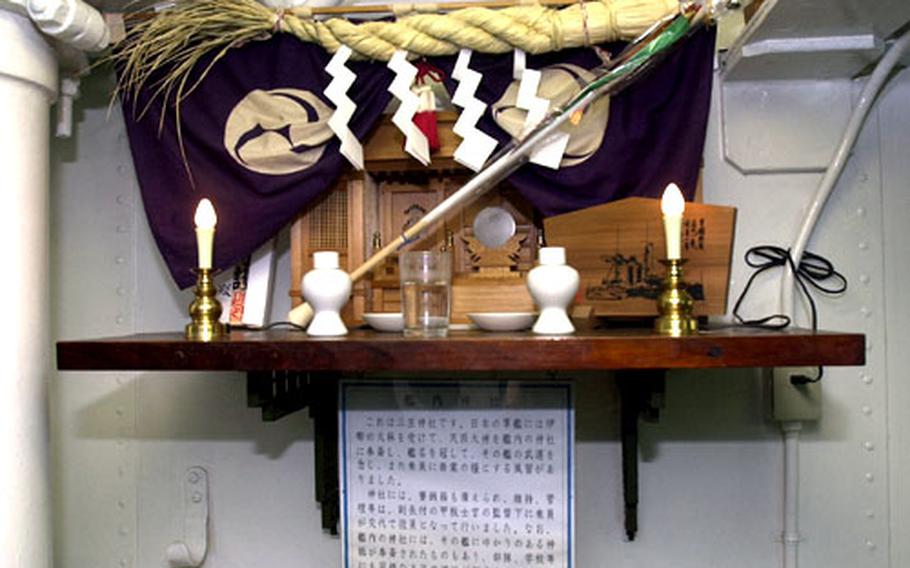 A shrine that was used by sailors to pray for a safe voyage sits aboard the battleship Mikasa. It is now a museum and the centerpiece of Mikasa Park, near Yokosuka Naval Base. (Rick Chernitzer / S&S) 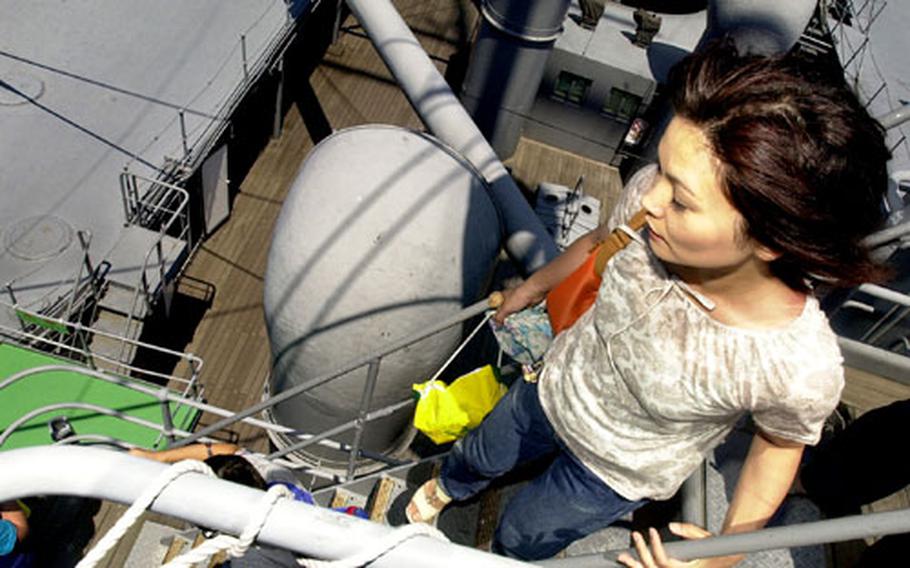 A Japanese visitor attempts to get a bird&#39;s-eye view of Yokosuka city from the mast of the Mikasa. (Rick Chernitzer / S&S) 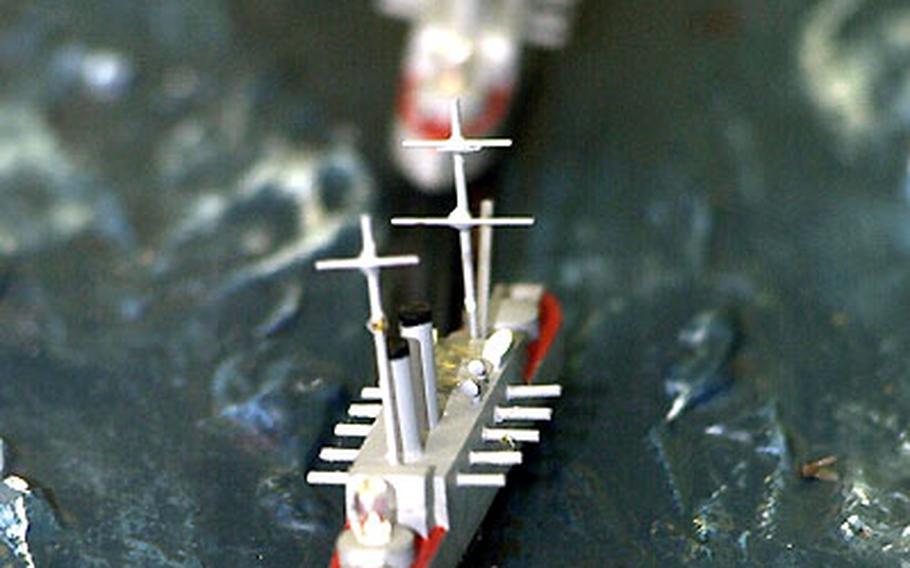 A moving scale model aboard the Mikasa illustrates Admiral Togo’s famous “turn” during the May 1905 Battle of Tsushima in the Sea of Japan. (Rick Chernitzer / S&S) 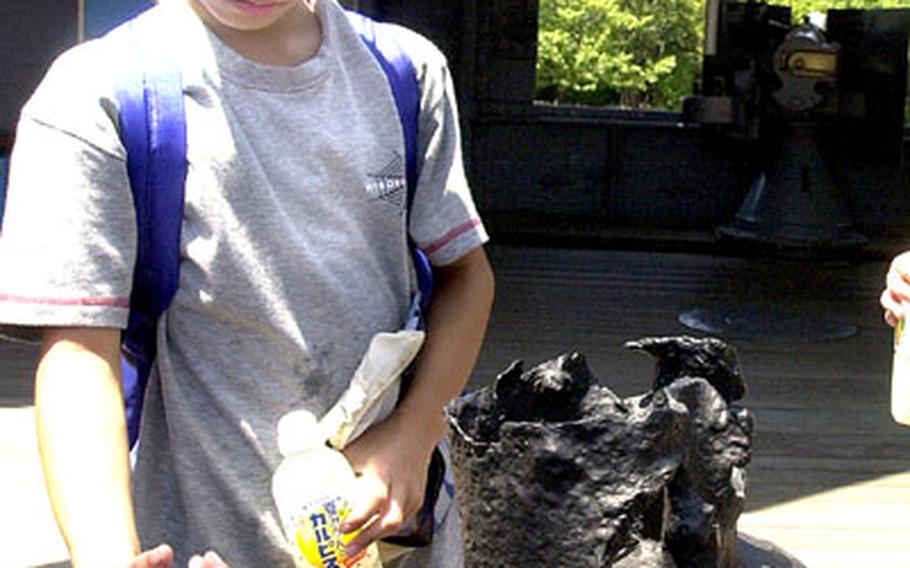 A Japanese child examines some battle wreckage on display aboard the Mikasa. (Rick Chernitzer / S&S)

Within sight of Green Bay at Yokosuka Naval Base sits a Japanese maritime warfare legend.The battleship Mikasa, which played a pivotal role in the Russo-Japanese War of 1905, is preserved at Mikasa Park, a five-minute walk from the base.

It's one of three internationally recognized naval ship museums, sharing the honor with the HMS Victory in Portsmouth, England, and "Old Ironsides," the USS Constitution, preserved in Boston.

The 15,100-ton pre-dreadnought rests in concrete. A statue of Adm. Heihachiro Togo, who commanded the fleet the Mikasa led, stands a few yards away at the park's center.

While originally preserved as a naval artifact in 1925, the Mikasa was left in ruins following the end of World War II. The memorial as it is seen today is due in part to Fleet Adm. Chester Nimitz's efforts in the early 1950s to have the ship preserved. Many have said the project helped unite Japanese and Americans following the occupation.

Aboard the Mikasa, visitors can wander through snapshots of history, as they admire the delicate woodwork in the admiral's quarters, marvel at the colored tape encircling spots on the ship where it took battle damage or stand by portals where cannons once fired.

Artifacts of the period, some having nothing to do with the ship, adorn large open areas below decks.

Some displays attempt to boost recruitment into the Japanese Maritime Self-Defense Force; others tout milestones in the self-defense forces' post-WWII history.

Little is mentioned of the Japanese Imperial Navy of World War II, however, and the displays show a definite time gap between the 1905 conflict and naval history after the occupation.

The most arresting display is a huge mock-up of the famous engagement in which Togo made his celebrated "turn," during the Battle of Tsushima in May 1905: He split his fleet in two to overcome the Russian fleet near Tsushima Island.

The display is complete with little moving ships, tiny lights representing cannon fire and sound effects replaying the battle sequence for anyone who walks past the motion sensor that triggers it. An accompanying narration, in Japanese, gives play-by-play action.

A film, also in Japanese and shown in a theater on the ship, tells the story of the battle. It includes many dramatic battle sequences that help overcome the obvious language barrier. In any case, the movie is a good chance to get off your feet after climbing around the ship.

Naval historians may remember the Mikasa only for its one flash of glory in the Sea of Japan one spring day in 1905 but to Japanese, it's a respected military artifact from days long past. A trip to this museum will give visitors some insight into those feelings.

Walking out the Yokosuka Naval Base main gate, turn left. Walk about five minutes until you see the ship's mast; follow it into the park. The ticket booth is to the right of the ship. Admission is 500 yen (about $4.18) for adults, 300 yen ($2.50) for high school students, and 200 yen ($1.67) for elementary students.