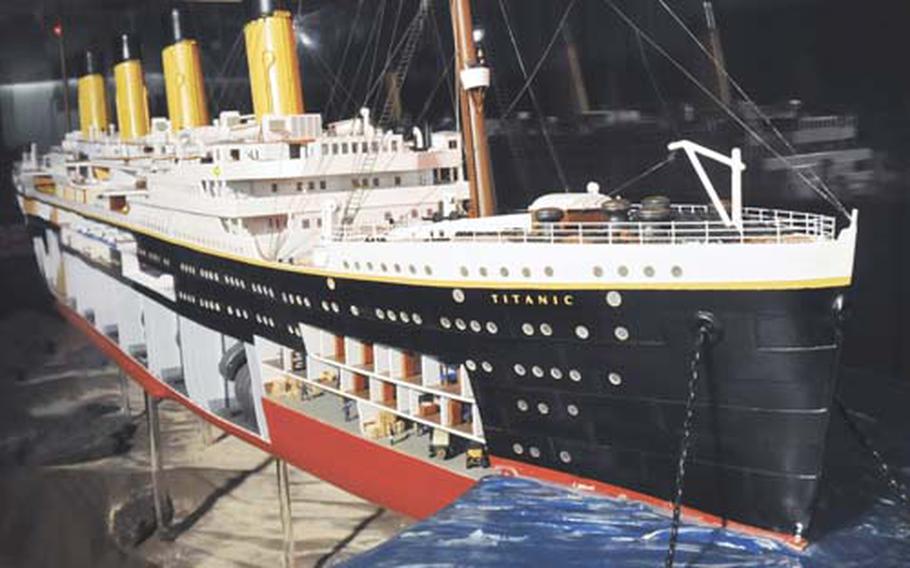 A large model of the Titanic, on a scale of 1 to 100, is on display at an exhibition on the doomed ship at the Wiesbaden Marktkeller. The exhibit runs through May 2. (Peter Jaeger / S&S)

A large model of the Titanic, on a scale of 1 to 100, is on display at an exhibition on the doomed ship at the Wiesbaden Marktkeller. The exhibit runs through May 2. (Peter Jaeger / S&S) A group of young visitors listens to a lecture about icebergs in front of an artificial iceberg at the Titanic exhibit. As they touch the iceberg, they learn about the icy temperatures of the sea at the time of the disaster. (Peter Jaeger / S&S) 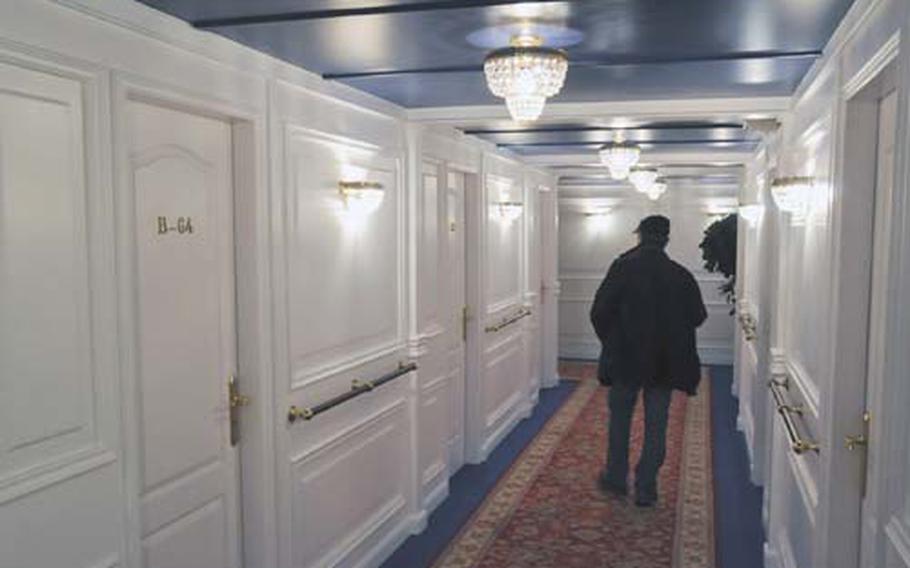 One of the hallways of the first-class section of the Titanic, was re-created in the style of the original ship. (Peter Jaeger / S&S) This watch and chain, found on the body of Swedish passenger Carl Asplund, is one of the items from those who died when the Titanic sank to be included in the special Titanhic exhibit in Weisbaden. (Peter Jaeger / S&S)

Nearly 100 years have passed since the Titanic sank on its maiden voyage in April 1912, but interest in the largest and most luxurious ship of its time remains steadfast.

Through May 2, visitors to the Marktkeller in Wiesbaden, Germany, can get an up-close and personal glimpse of the Titanic and its passengers, from the ship&#8217;s conception and construction to the fatal night when approximately 1,500 people aboard the ship died after it struck an iceberg and sank to the bottom of the Atlantic Ocean.

The Marktkeller offers a stunning atmosphere for the exhibition. With vaults constructed out of yellow brick and embedded glass to provide ambience, the subterranean environment provides an eerie but magnificent place to relive the history of the ill-fated ship.

Upon entering the exhibit, assembled from a private collection, you receive a boarding pass and your journey begins. After having your photo taken crossing a mock entry bridge, you don audio guide headphones, available in English, and begin touring the exhibit at your own pace. It takes about 90 minutes to complete.

With a blending of 150 original artifacts from the Titanic and passengers, along with models, photos and emotional stories, the exhibit is done with class and respect for the victims. Clothing and possessions of the drowned, along with postcards they had sent to loved ones from the ship, help create a mixture of awe and sympathy as you imagine those aboard the luxurious ship, unaware of their fate.

One display is of a ring that was worn by passenger Gerda Lindell. As you stare at the antique ring, the story is told of her struggle to reach the lifeboats designed to carry passengers to safety. Lindell and her husband were so drained of energy by the time they reached a boat, they were unable to climb in. As she tried, her ring fell off her hand and into the boat as she and her husband were washed away in the frigid ocean waters.

Stories of bravery and courage displayed by crew and passengers are also shared, immersing visitors into the lives of the dead as well as the survivors.

Throughout the exhibit, rooms are re-created using furniture retrieved from the ship, offering a glimpse into the amenities aboard the Titanic.

A gift shop at the end of the exhibit has a variety of Titanic-themed items, including wine from nearby Hochheim, a brand that was served on the ship. And although the exhibition is the main draw, the city of Wiesbaden is complementing the exhibit with a host of other activities.

For example, at the White Star Lounge &#8212; named for the British shipping company that owned the ship &#8212; visitors can attend a &#8220;dining experience&#8221; that replicates the menu that the Titanic&#8217;s first-class passengers enjoyed. At &#8220;Titanic Night&#8221; on Thursday, patrons can pay a reduced admission fee of 6 euros to see the exhibit and join in a variety of activities &#8212; including viewing Titanic-themed films &#8212; around the city. Similar nights could be scheduled if the first is a success.

Directions: The Wiesbaden Marktkeller is at Marktplatz 2-4. Follow B54 into downtown Wiesbaden, where it becomes Frankfurter Strasse. Turn left onto Rheinstrasse, then quick rights onto Bahnhofstrasse then Friedrichstrasse. Turn left onto De-Laspee-Strasse and continue straight ahead to the Marktkeller area opposite the town hall. Parking is available in several nearby garages.

Costs: Admission is 13 euros for adults, 9 euros for children, students and disabled. A family ticket for up to four children, and discounts for groups of 10 or more are also available.

Food: Close to the exhibition is the temporary White Star Lounge in the Lumen Restaurant, set up to coincide with the exhibit. Guests can reserve a multicourse dinner following the Titanic&#8217;s menu &#8212; between 52 and 75 euros each &#8212; with a VIP tour of the exhibit by calling 0611 1667355 or e-mailing titanic@lumen-wiesbaden.de. The restaurant&#8217;s Web site is www.lumen-wiesbaden.de (German only).

Information: The Web site www.titanicausstellung.de, in German, includes information on the exhibit and related activities. Information in English is available at the Wiesbaden Tourist Information Office at Marktplatz 1 or by calling 06721-1870-18.