Windmills were used to pump water from the fens during the last century. Wicken Fen is a final remnant of that broad landscape, home to hundreds of species of plants, insects and birds. (Ron Jensen / S&S)

Windmills were used to pump water from the fens during the last century. Wicken Fen is a final remnant of that broad landscape, home to hundreds of species of plants, insects and birds. (Ron Jensen / S&S) 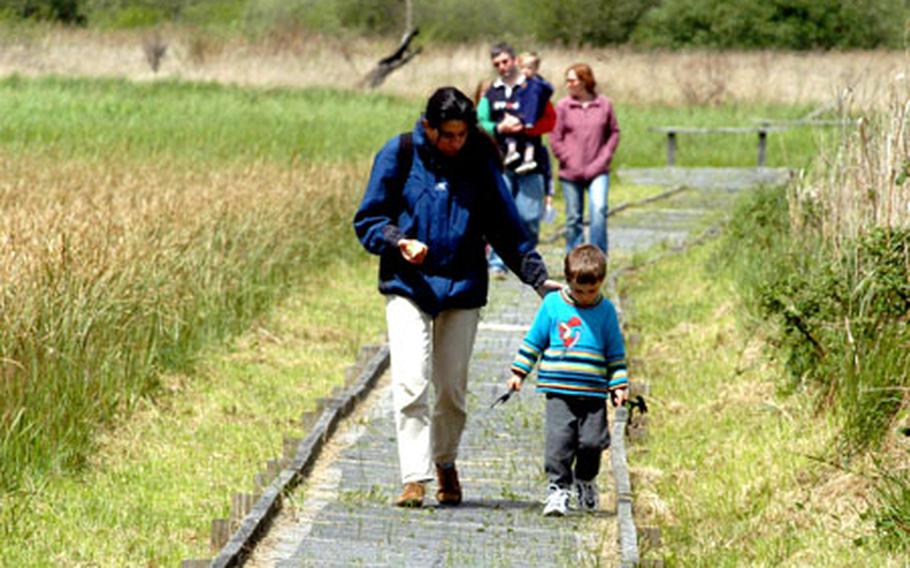 A boardwalk allows for easy walking through the tall grass and the trees of Wicken Fen, England. Other paths provide longer hikes, but might be muddy. (Ron Jensen / S&S)

Sometimes it pays to get away from it all. Put the work and the stress and the expectations on hold and tell yourself to take a hike.

One wonderful place to do that is Wicken Fen, about 20 miles from the main U.S. Air Force bases of RAF Mildenhall and RAF Lakenheath in eastern England.

To walk on one of the well-marked and maintained trails is to be serenaded by the trill of about 200 species of birds and the gentle sound of wind pushing through tall grass and trees.

You might spot fish in the canals or a lizard sunning itself on a rock. Look for an otter slipping into the water and butterflies zigzagging among the wildflowers.

But while the fen soothes you, consider that it is in a battle for its own existence.

Wicken Fen is a survivor, one of the most important wetlands remaining in western Europe because of its variety of plants, birds, insects and other critters.

It is a remnant of a much larger area known as the Fens, which formed 5,000 years ago when the sea encroached on the land and left behind waterlogged bogs that stretched for miles through several counties.

Ely, the city of the great cathedral, was an island in the Fens. People who lived there and on other islands harvested everything from food to fuel from fens. Peat, cut from the ground and used for heating and cooking, burned well in their fires.

The fens have nearly disappeared as a result of constant engineering efforts to drain the land and use it for farming. The Romans tried managing them after invading the British Isles nearly 2,000 years ago. The effort continued into the early 20th century, which succeeded in creating acres and acres of fields for everything from carrots and sugar beets to cabbage.

But while the drainage was a gain for agriculture, it was a great loss for the natural habitat. Wicken Fen is an attempt to hang onto the landscape that has slowly disappeared over the centuries.

Researchers from the nearby University of Cambridge consider it a valuable laboratory because so little like it still exists. It is believed Charles Darwin visited the fen in the 1820s while he was at the university.

In 1899, the National Trust purchased a couple of acres of the fen to preserve it. Since then, the area under the trust&rsquo;s care has grown to 900 acres.

However, further agriculture encroachment and the pressure for housing in the area threaten it. The Trust is trying to buy more land, which it would return to the prefarming landscape.

DIRECTIONS: Wicken Fen is outside the village of Wicken, England, on A1123, south of Ely. It can be reached by car from RAF Mildenhall and RAF Lakenheath by taking B1102 to Fordham, A142 to Soham and then turning left on A1123 at the roundabout.

COSTS: Admission is 4.10 British pounds, about $8, for adults and 1.30 pounds, about $2.50, for children. National Trust members are admitted free with a membership card.

TIMES: The nature reserve is open every day of the year from dawn to dusk. The visitor center and shop, selling books and gifts, are open 10 a.m. to 5 p.m. throughout the year except Mondays, although they are open on bank holiday Mondays.

INFORMATION: Trail maps are available at the visitor center&rsquo;s shop. Additional information, including special events and details on school visits, is at www.wicken.org.uk.