One of the most popular sites at the Waterloo Battlefield monument is the panorama painting of the battle. Panorama paintings were a popular form of mass entertainment in the early 1800s before photography and the motion picture. Today, there are only 10 such paintings remaining on display in western Europe. (Kevin Dougherty / S&S)

One of the most popular sites at the Waterloo Battlefield monument is the panorama painting of the battle. Panorama paintings were a popular form of mass entertainment in the early 1800s before photography and the motion picture. Today, there are only 10 such paintings remaining on display in western Europe. (Kevin Dougherty / S&S) Lion Hill is reached by climbing a 226-step staircase. Working their way down recently was Josephine and John Sutton (foreground) and Sean and Mary Farrell, all of Ireland. The mound and lion were a gift from the Netherlands. (Kevin Dougherty / S&S) 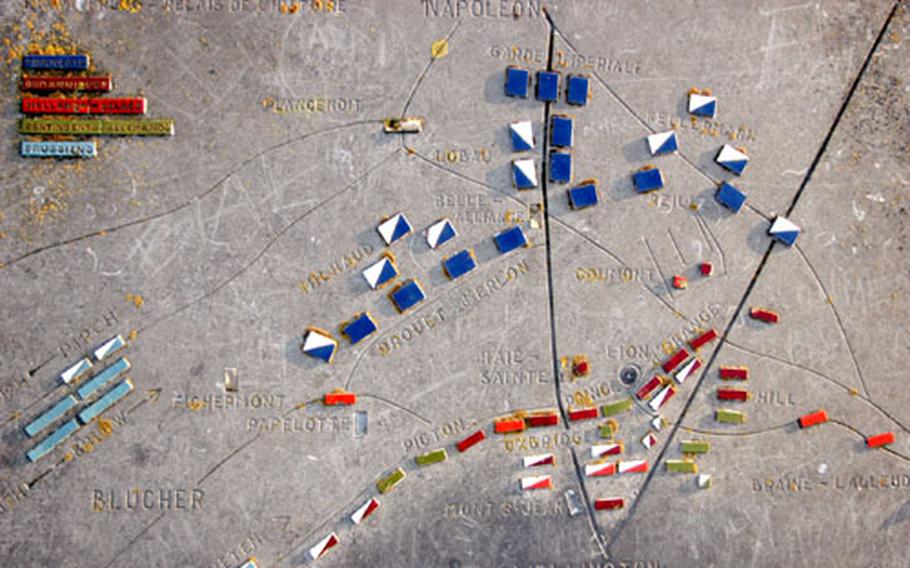 At the top of Lion Hill is a stone marker noting the location of troops during the Battle of Waterloo. (Kevin Dougherty / S&S)

&ldquo;Nothing except a battle lost can be half so melancholy as a battle won.&rdquo;

&mdash; The Duke of Wellington in a dispatch from Waterloo, Belgium

Two centuries of progress and population growth have outflanked the Waterloo battlefield.

While the area around Lion Hill is mostly open field, the sights and sounds of civilization are never far away. A busy highway is within earshot of the Belgian site, and homes and shops occupy large swaths of land where more than 40,000 men were wounded or killed.

And yet a tour of the battlefield and related attractions are fairly serene, affording visitors the opportunity to delve deeper into a watershed moment for Europe.

A visit to Waterloo &ldquo;is great if you like history,&rdquo; said John Sutton, an Irishman who was touring the area. &ldquo;If you come to Europe, you&rsquo;ve got to come to this place and see it,&rdquo; he said.

Waterloo conjures all sorts of Napoleonic images, and for good reason, being it was the French leader&rsquo;s final lunge for power. The June 18, 1815, battle came at the end of the so-called &ldquo;100 Days&rdquo; furlough Napoleon Bonaparte enjoyed after his escape from the island of Elba in March 1815. His defeat lowered the curtain on a quarter-century of war, doused France&rsquo;s dreams of becoming an empire and brought to an end Napoleon&rsquo;s reign once and for all.

It also ushered in 50 years of relative peace.

The nine-hour battle amounted to &ldquo;the beating up of Napoleon,&rdquo; said Pia Morch, a Dane who lives in Waterloo.

Napoleon&rsquo;s loss was Arthur Wellesley&rsquo;s gain. Regarded as a talented coalition general, the British officer led a brilliant campaign that led the allies &mdash; Belgium, Britain, Germany and the Netherlands &mdash; to victory. The win gave added luster to the legend of the Duke of Wellington.

Each year about 250,000 people tour the site, which includes Lion Hill, a visitors center, a wax museum and a rotunda with an impressive panoramic painting. While most visitors are Europeans, Smolders said visitors come from as far away as China and Nigeria.

The battlefield&rsquo;s signature feature is Lion Hill, a 147-foot-high mound with a statue of a lion on top. A gift from the Dutch in 1826, the lion, his right paw atop a globe, serves to remind the world of &ldquo;the peace Europe secured on the plains of Waterloo.&rdquo;

Ascending the hill is fairly easy, providing a person is in good enough shape to climb the more than 200 steps leading to the top.

Separate from the main complex are the former headquarters of Wellington and Napoleon. The Wellington Museum is the more developed and promoted of the two, but each provides interesting glimpses into their respective worlds on the eve of battle.

Every July and August weekend, re-enactments are staged, drawing hundreds of people. Smolders said they help the public understand the battle.

&ldquo;We want to be close to the people with these demonstrations,&rdquo; Smolders said. &ldquo;People are very interested in the place.&rdquo;

DIRECTIONS: Belgium&rsquo;s Lion Hill is easily visible from the Ring Ouest, or RO, which, along with E-19/A7, forms the ring road around Brussels. Waterloo is 10 miles south of Brussels, and the &ldquo;Butte du Lion&rdquo; exit is No. 25. Signs along RO point the way.