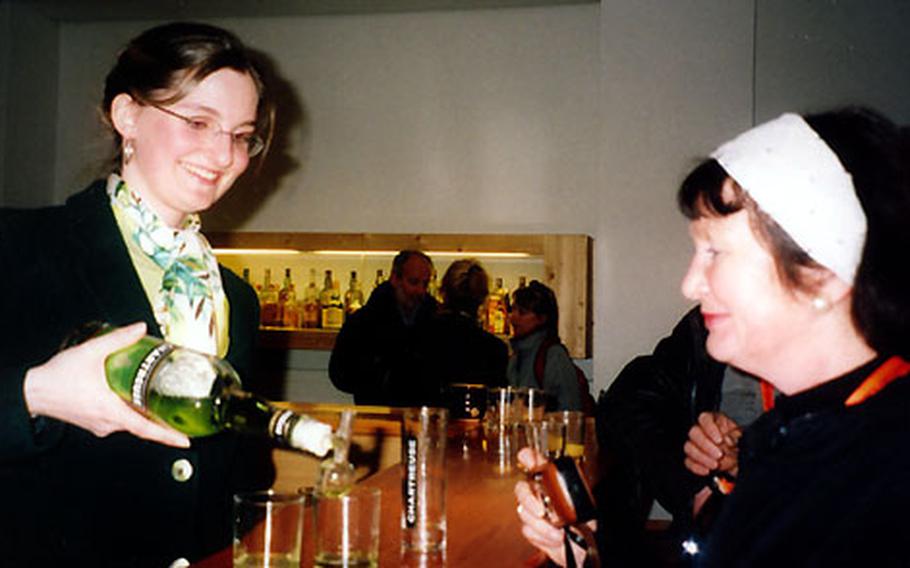 Ludvine Besson, hostess at the Chartreuse monastery, pours a visitor a glass of Chartreuse. (Leah Larkin / Special to S&S)

Ludvine Besson, hostess at the Chartreuse monastery, pours a visitor a glass of Chartreuse. (Leah Larkin / Special to S&S) 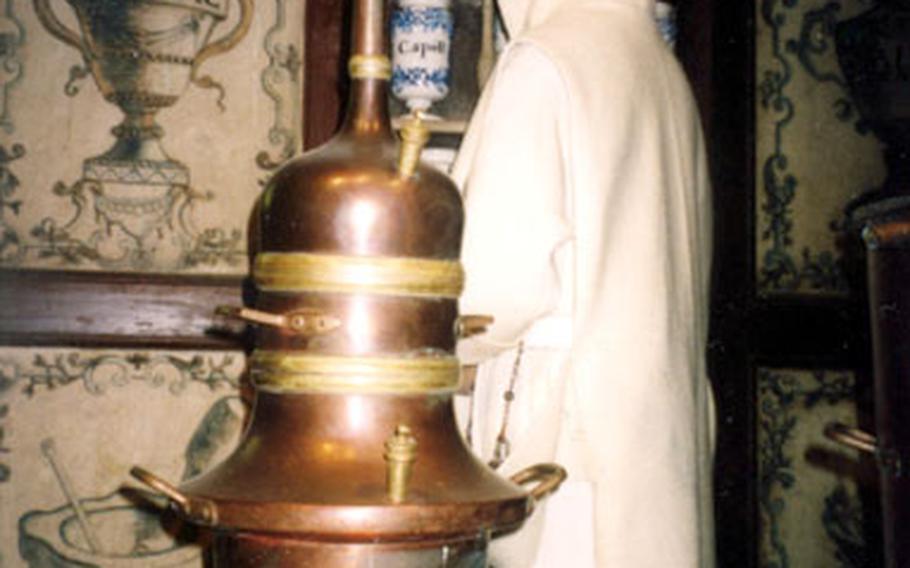 An exhibit on Chartreuse liqueur in the cellar of the monastery in Voiron, France, features a mannequin of a monk in an old-fashioned apothecary. The cellar is said to be the world’s largest liqueur cellar. (Leah Larkin / Special to S&S)

It&rsquo;s shrouded in mystery and secrecy. Only three monks secluded in an ancient monastery know its magic formula, one that has survived wars and attempted thefts. And those monks have taken the vows of chastity, poverty, obedience &mdash; and silence.Green Chartreuse, or Chartreuse Verte, is a potent, 110- proof liqueur with a green color.

First mentioned in 1605, it is made from the seeds, leaves, fruits, flowers and roots of more than 130 plants. It is not everyone&rsquo;s cup of tea: Some rate its strong herbal taste disgusting, but others praise it, if not for its taste, then for its healthful properties.

The monks also make a less potent yellow Chartreuse, called Chartreuse Jaune, that is only 80 proof.

Ludvine Besson is a hostess at the Chartreuse monastery in Voiron, France, which offers tours of the cellars and samples of the elixir. She likes both versions, but especially the green.

&ldquo;I had a sore throat yesterday. I could hardly breathe,&rdquo; she says. So she made a mixture of hot chocolate, honey and green Chartreuse, and drank one in the morning and one in the afternoon. By evening, she says, she was &ldquo;perfect.&rdquo;

Thus are the powers of Chartreuse, whose production is simple though the exact proportion of its ingredients is unknown. The 130 herbs listed in the recipe are first left to macerate in a carefully selected alcohol, then distilled. Distilled honey and golden syrup are added to produce the green and yellow liqueurs that then age for several years in huge casks.

While Chartreuse is meant to be an after-dinner drink served cold, it is also touted as an innovative cocktail addition to be mixed with vodka, gin, whiskey, orange juice, tonic water, etc. And, there&rsquo;s always hot chocolate.

I tried it with hot tea and honey to cure a cold. I wasn&rsquo;t cured, but I definitely felt better.

Monastery visitors are treated to a delightfully entertaining film about the monks and their brew before following a guide through the long, dark and musty cellars, claimed to be the world&rsquo;s largest liqueur cellar, where Chartreuse ages in oak casks.

The monks responsible for this liqueur are members of the Carthusian order, which was founded in 1032 by Saint Bruno. He left the University of Rheims to withdraw from the world and lead a monastic life. Grenoble was his goal, where he was welcomed by the bishop, who had wanted to build a shrine to God in the mountainous wilderness. Seven stars are said to have led the way to the lonely site where Bruno and his six companions built wooden cells, a chapel and a few other buildings. It became known as La Grande Chartreuse, and the buildings on the site today are the main monastery of the Carthusian order.

Through the years the monks grew crops and raised livestock for food. The monks dug mines, and extracted iron ore, which they turned into cast iron, fired in blast furnaces fed by charcoal processed from the wood from surrounding forests and powered by water from the mountains. They made a valuable contribution to the local economy, having at one time 11 furnaces employing local workers.

But their fortune with metal did not last. By the early 18th century, better means of production led to the gradual closure of their furnaces. The monks had to find a new economic activity.

So they dug out an ancient and treasured recipe for an &ldquo;elixir of a long life&rdquo; from a manuscript given them in 1605, more than 100 years earlier. Brother Jerome Maubec, the monastery&rsquo;s apothecary, began to experiment with the old formula. His recipe is still used to produce Herbal Elixir of the Grande Chartreuse, which, at 142 proof, is bound to give you a kick, if not a long life.

When the monks dispersed during the French Revolution, one kept the precious recipe, but he was arrested and sent to Bordeaux. He managed to sneak the formula to another monk. However, figuring the Chartreuse monks would never again be able to brew the green liquid, that monk gave the recipe to a pharmacist in Grenoble, a Monsieur Liotard.

Then came Napoleon, who declared that secret remedies must be submitted to the Ministry of Interior for use by the government. Liotard dutifully sent off the recipe, but it was returned with the stamp, &ldquo;Refused.&rdquo;

When Liotard died, the manuscripts were returned to the monks. They set up production again, adding to their repertoire by developing the milder yellow Chartreuse.

There were many attempts to steal the recipes, and in 1903 trouble befell the monks again. They were expelled from France, but took their recipe with them to Spain where they set up production at a distillery in Tarragona. They returned to Marseille in southern France in 1929, but it wasn&rsquo;t until 1935 that they made it back to La Grand Chartreuse and resumed creating the golden and green liquids.

Today Chartreuse is sold in 100 countries, with the United States being one of the largest export markets. Besson, the monastery hostess, says about a million bottles are produced annually, with the profits being directed to the support of the some 40 monks who live at the Voiron monastery, as well as the Carthusian monks living in 23 other monasteries run by the Order around the world.

&ldquo;I find it amazing that only three monks produce so much,&rdquo; she says. &ldquo;I&rsquo;ve been here three years. I&rsquo;ve seen the monks. I know they do it themselves.&rdquo;

But while the liqueur has become well-known, its formula has not and never will. According to information from the monastery, the three monks are entrusted with the powerful secret by their order and are never to reveal it.

&ldquo;They work in the greatest of secrecy and are the only ones who know the details of the manufacturing,&rdquo; the monastery information says. &ldquo;Even today, the formula remains a mystery which modern investigation methods have not been able to penetrate.&rdquo;

WHERE: The Voiron monastery is in the Rh&ocirc;ne Alps north of Grenoble, France.

WHAT TO BUY: A gift shop at the monastery sells liqueurs as well as herb teas and other herb products. Souvenirs, such as T-shirts, are also available.