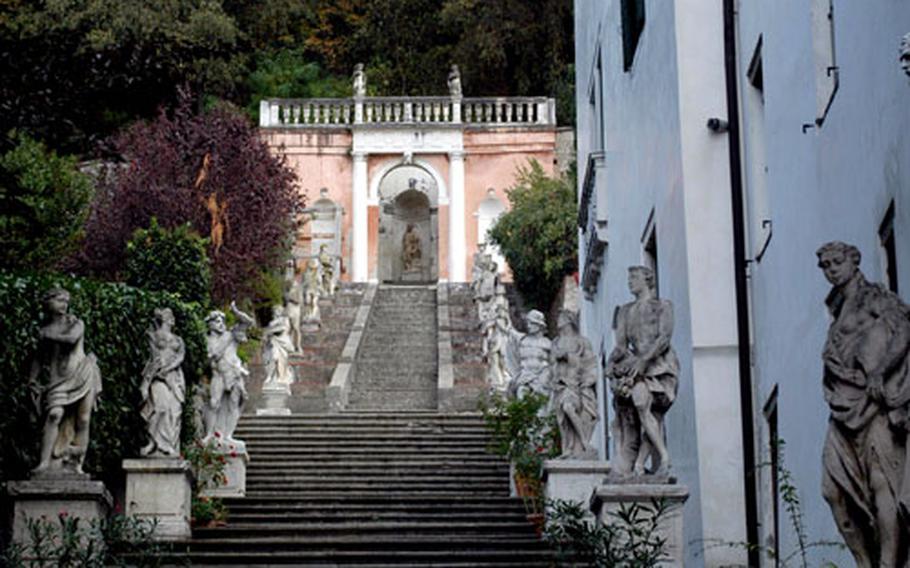 Villa Noni-Mocenigo features an elaborate garden that can be seen through its gates. It’s located along a cobblestone road that starts in the heart of the Monselice’s medieval center and winds its way up the mountainside. (Kent Harris / S&S)

Villa Noni-Mocenigo features an elaborate garden that can be seen through its gates. It’s located along a cobblestone road that starts in the heart of the Monselice’s medieval center and winds its way up the mountainside. (Kent Harris / S&S) 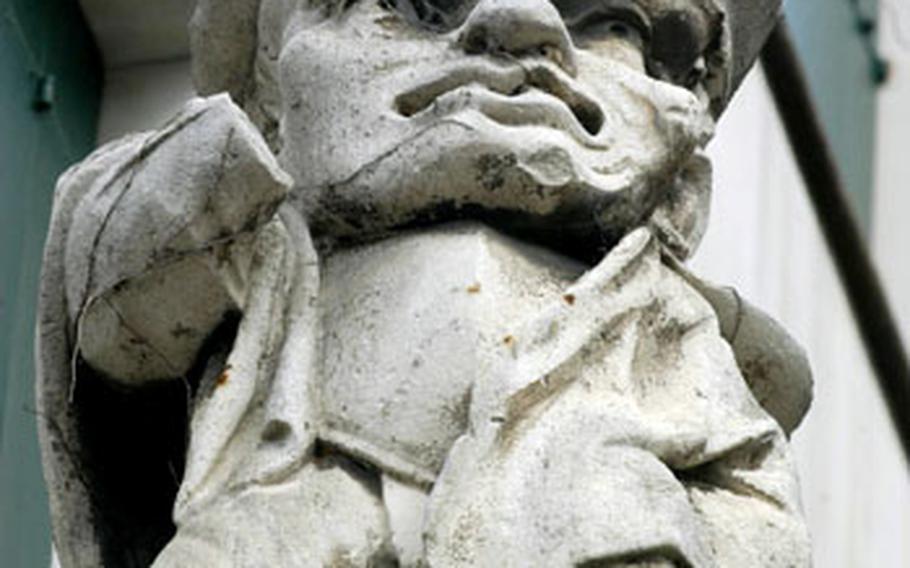 A statue of a stern-looking dwarf stands atop the outside wall of the Villa Noni-Mocenigo in Monselice, Italy. “Noni” is dwarf in Italian. (Kent Harris / S&S) After passing through the Porta Romana, visitors to Monselice, Italy, can walk past six chapels on their way to the Church of St. George and an adjoining villa built by the Duodo family in the 16th century. (Kent Harris / S&S)

With all that Italy&rsquo;s Veneto region has to offer, sometimes it&rsquo;s easy to skip places such as Monselice, a city south of Padua.

And the first impression a visitor gets when leaving the A-13 autostrada is that there probably are good reasons why few Americans have heard of the place. Let&rsquo;s just say that modern Monselice, which surrounds much of the medieval core, isn&rsquo;t featured on a lot of postcards.

"We don&rsquo;t get a lot of Americans or English speakers here," says Barbara Mordini, a tour guide at the Castello di Monselice, apologizing for her rusty English. She&rsquo;d just finished a tour for a group of German speakers, who make up much of the tourism the city gets.

But those willing to go a few steps beyond the modern city &mdash; and brave the series of one-way streets in search of a parking spot &mdash; can step back into the city&rsquo;s past and check out some interesting architecture, lots of medieval armor, statues of sometimes-angry-looking dwarves and a series of chapels named after much larger (and more famous) counterparts in Rome.

Start at Piazza Mazzini, a large square flanked by city hall on one side and the heart of the medieval city on the other. There&rsquo;s a cobblestone road that leads from the square past the tourist office and starts climbing up the small mountain that dominates the city skyline. You can&rsquo;t visit the remains of the keep on top, though there are plans to change that in a year or so. Visitors can, however, visit the castle at the foot of the mountain.

Castello di Monselice is a hodgepodge of architectural styles and eras. Some parts date to the 11th century. There have been many restorations over the years. It&rsquo;s interesting enough on the outside, but the real reason to pay for the obligatory tour is what&rsquo;s inside.

Mordini says the castle houses the second-largest armory in Italy. Many pieces hail from other countries, such as Germany, France and Spain. Upstairs, in a newer section of the castle, check out a roof that features frescoes of more than 200 animals native to the area &mdash; some now extinct. The palace also has several interesting gardens you can see on the tour.

Speaking of gardens, check out the sculpture-lined walkway leading up the mountain from the steel gates of the Villa Nani-Mocenigo. It&rsquo;s only a few minutes from the castle along the cobblestoned Via al Santuario. Then look up at the walls you&rsquo;re walking by to see statues of dwarves (though a J.R.R. Tolkien fan might think a few of them look more like hobbits).

The Duomo Vecchio (Old Cathedral) is another five-minute walk up the mountain. There are only a few remains of 13th-century frescoes near the altar. One can only picture what it might have looked like if they once covered all the walls, which are now mostly undecorated.

After a look inside the Duomo, continue up the road and pass through the Porta Romana. You&rsquo;ll notice six chapels on the left, each featuring a painting by Jacopo Palma the Younger. Each chapel is dedicated to larger counterparts to the south in Rome.

The road ends with the small Church of St. George on the right, a villa built by the Duodo family, and a series of steps to the left. Climb those steps for a sweeping view of the countryside when the weather is sunny and clear.

Know and go ...Directions: Monselice is just off Autostrada 13, which connects Padua to Bologona. From Vicenza, take A4 east and head south on the A13 just past Padua; it&rsquo;s about a 45-minute drive. From Aviano, take the A4 west and head south on A13 just before getting to Padua. Follow the "centro" signs into the city.

Times: The castle can be visited only on organized tours at 9., 10 and 11 a.m., and 3, 4 and 5 p.m. from late March through November. Tours may be reserved at other times. The Duomo Vecchio is open 9 a.m. to noon and 3-8 p.m. daily. Hours for the six chapels and St. George&rsquo;s Church vary by the month but essentially mirror daylight hours.

Costs: A tour of the castle costs 5.50 euros for adults, 3 euros for students, with a combo ticket to the adjoining Lombard Museum costing 6.50/4.50. There&rsquo;s no cost to visit the Duomo Vecchio or the six chapels and St. George&rsquo;s Church. Some city parking is free. Other areas offer metered parking.

Food: There aren&rsquo;t a lot of eateries to choose from in the medieval quarter. There are a few restaurants around Piazza Mazzini and several other places that sell sandwiches or light fare. There are several places with benches along the walk up to St. George&rsquo;s Church and a Super A&O market on the edge of town for those who like to picnic.