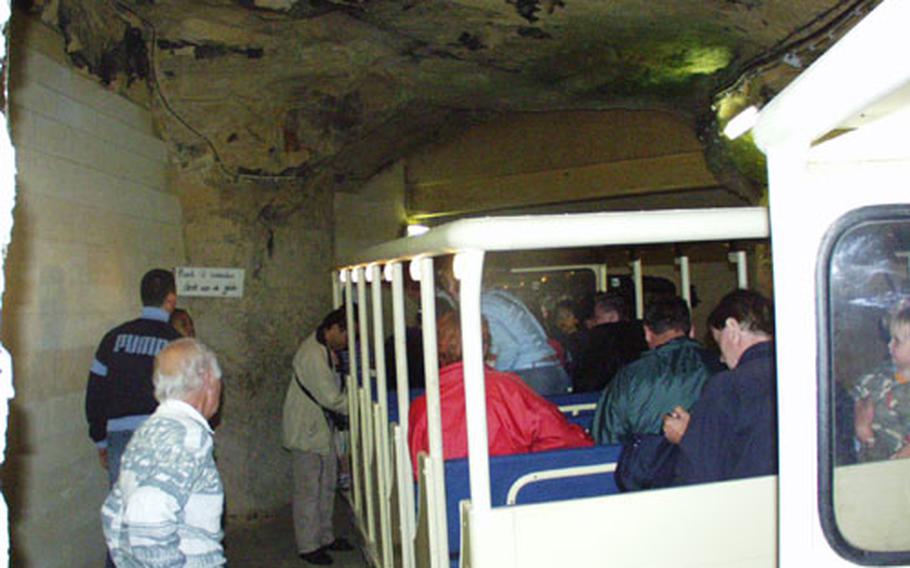 The Municipal Cave in Valkenburg, Netherlands, draws tens of thousands of visitors annually. Visitors to the cave can walk or take a cart train, seen here, which cuts the hourlong foot tour in half. (Kevin Dougherty / S&S)

The Municipal Cave in Valkenburg, Netherlands, draws tens of thousands of visitors annually. Visitors to the cave can walk or take a cart train, seen here, which cuts the hourlong foot tour in half. (Kevin Dougherty / S&S) 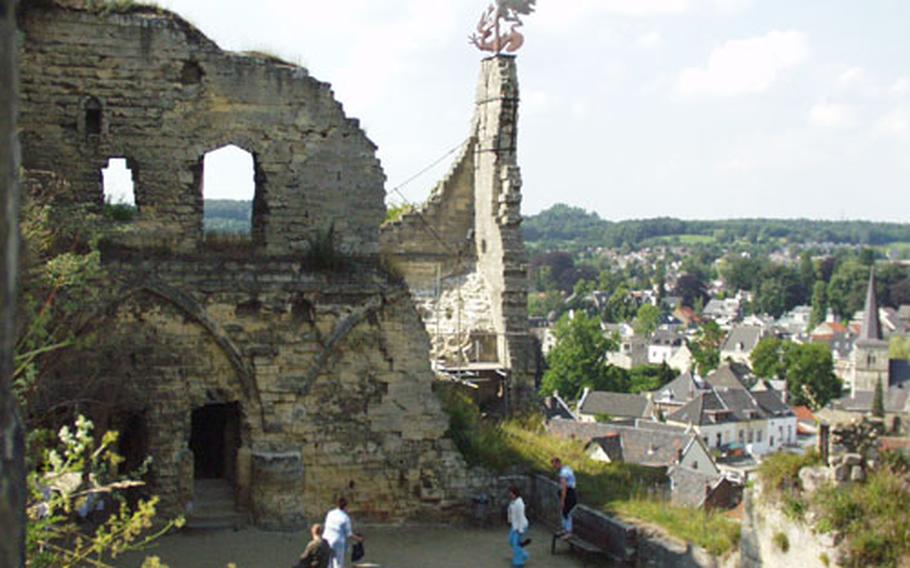 Valkenburg Castle dates to the time of knights and fair maidens. Today, the castle ruins overlook the city of Valkenburg, the unofficial capital of the Hill Country in South Limburg, the southernmost part of Netherlands. From the sidewalk cafes below, the walk to the castle ruins and the adjoining tourist center takes only a few minutes. (Kevin Dougherty / S&S) 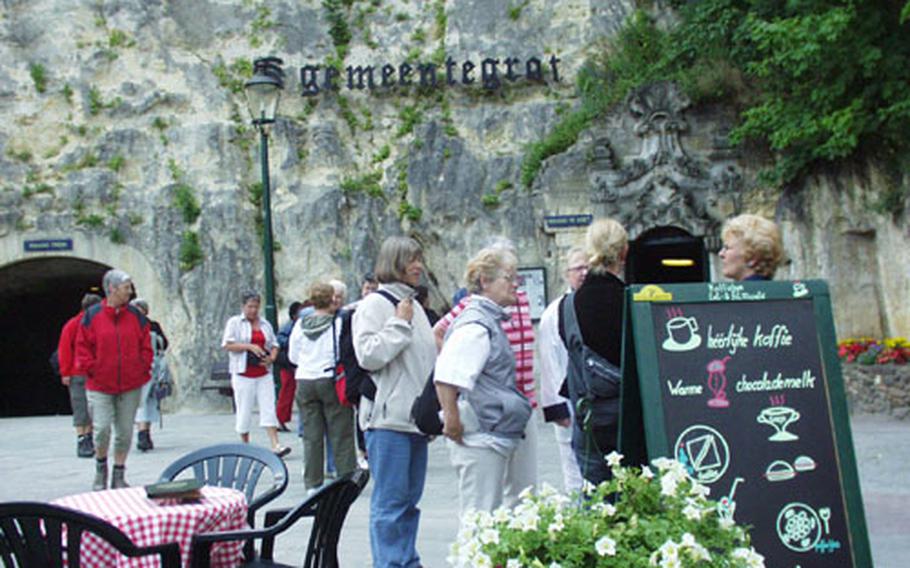 The Municipal Cave in Valkenburg, Netherlands, draws tens of thousands of visitors annually. Started by the Romans some 2,000 years ago, the network of caves grew over the centuries as each succeeding generation continued to quarry from the surrounding hills. (Kevin Dougherty / S&S)

In the mid-1880s, the first tourism office in the Netherlands opened, and it wasn&rsquo;t in Amsterdam or Den Haag.

That distinction belongs to Valkenburg, a city of spas and sidewalk caf&eacute;s, of caves and castle ruins. Tourists have been coming to this city in South Limburg for more than 150 years.

But they are relative newcomers.

The Romans took a liking to the place &mdash; and its stone quarries &mdash; back around the time of Christ. And during the Middle Ages, lords, knights and maidens roamed the grounds of the once-thriving Valkenburg Castle.

Today, the castle ruins overlook the city center, drawing a steady stream of visitors to its gates, visitors such as Lynise Wright and her sister, Leila.

&ldquo;It&rsquo;s very interesting,&rdquo; Wright said, nodding toward the castle. &ldquo;In fact, a lot of the limestone [used to build it] came out of those caves.&rdquo;

Wright, who works for the U.S. Army in nearby Schinnen, brought Leila to Valkenburg aan de Geul, as it is formally known, shortly after she arrived from the United States.

Valkenburg is one of those indispensable destinations, insofar as it is attractive, compact and versatile. There is more than enough to keep young and old entertained and well-fed, whether for a few hours or a few days.

Valkenburg is ideally located, particularly for those in central Germany and the Benelux. The drive from Frankfurt, for instance, takes about 2&frac12; hours, a reasonable investment for a weekend getaway or a daylong outing.

After pulling into town, it&rsquo;s best to head to the old city center and one of its sidewalk caf&eacute;s to get a beverage and check your bearings before heading out to explore.

Two of the best places to visit are the castle ruins and Gemeentegrot, otherwise known as the Municipal or Town Cave.

Kids will enjoy roaming the ruins. Under the castle is Fluweelengrot, or the Velvet Cave, which boasts a series of passages that knights once used to sneak up on their enemies from behind.

Just a few minutes away is the Town Cave. Visitors can tour the labyrinth of passages on foot or by railway car. The cave&rsquo;s temperature remains a constant 54 degrees Fahrenheit year- round, so take a light sweater or jacket.

The Romans began quarrying the cave 2,000 years ago, extracting blocks of soft stone for buildings. Throughout the centuries, as the underground network grew, the cave became a place of refuge in wartime. Fons Dorren, a local tour guide, said 3,000 people hid in the cave for two weeks while Allied forces advanced on the city in September 1944.

Perhaps the most intriguing aspect of this subterranean world is the cave art. Portraits and sculptures, and murals depicting scenes from the Middle Ages to the present, appear on walls and in nooks along the tour route.

Above ground, as Dorren was closing the cave for the night, Wright and her sister were deciding what to do the next day. While the city has a health resort, casino and amusement park, the pair was looking to move on.

Directions: Located near the German and Belgian borders, Valkenburg is the unofficial capital of the so-called Hill Country in South Limburg, the southernmost area of the Netherlands.

In the Benelux, head in the direction of Maastricht, north of Liege, Belgium, and just west of Valkenburg. From Mons, take A7 and A15 toward Liege, then A2 to Maastricht. The highway cuts through town.

On the north end of Maastricht, take A79 to Valkenburg.

From central Germany, drive toward the border town of Aachen, west of Cologne. Take A61 north, past Bonn, to A4; or take A5 north to A45, then head northwest toward A4 and Aachen.

Take A4 to A76, which will cross the border before connecting to A79, which will lead to Valkenburg. (Note: At the German-Netherlands border there is an Esso gas station that takes Army and Air Force Exchange Service gas coupons.)

There are two Valkenburg exits on A79; each leads into the city.

Hours: The castle ruins are accessible between January and March from 10:30 a.m. to 4 p.m. From April to June, the hours change to 10 to 5. In July, August and September, the castle is open until 6 p.m. Admission is 3 euros.

Touring Gemeentegrot, or the Town Cave, takes 30 minutes by train and one hour by foot. From the Sunday before Easter to Oct. 31, the cave is open from 10 a.m. to 5 p.m. However, the last tour of the day leaves between 4 and 4:30 p.m. From Nov. 1 to the Sunday before Easter, the daily weekday tour is at 2 p.m. On weekends during this period, the cave is open from 10:30 to 4. (Again, the last tour begins well before 4 p.m.) Admission is 4 euros for adults and 3 euros for children.

More information: Go to www.vvvzuidlimburg.nl for info on Valkenburg activities and accommodations. The site has links to places and events.