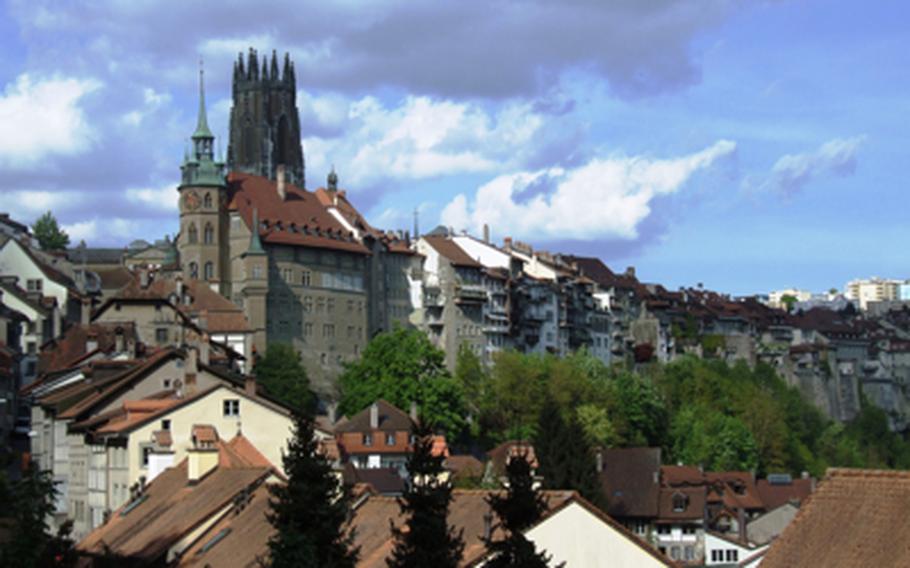 The tower of the 13th-century St. Nicholas Cathedral dominates the Fribourg skyline. The town is built on two levels, and includes a medieval old town. (Leah Larkin/Special to Stars and Stripes)

The tower of the 13th-century St. Nicholas Cathedral dominates the Fribourg skyline. The town is built on two levels, and includes a medieval old town. (Leah Larkin/Special to Stars and Stripes) 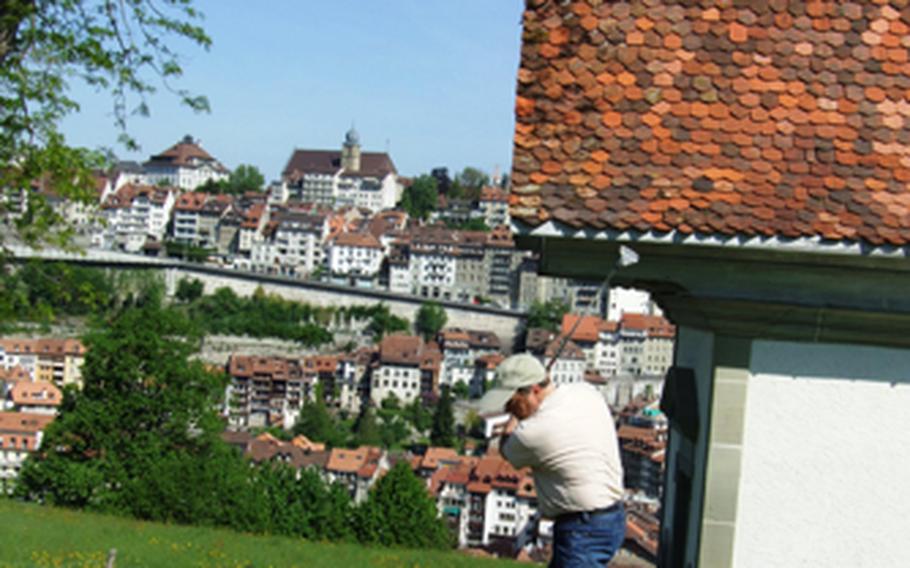 A player prepares to tee off and begin another hole of urban golf in the Swiss town of Fribourg. A round of golf is a good way to get to know the charming medieval town, while also getting plenty of laughs and exercise. (Leah Larkin/Special to Stars and Stripes) 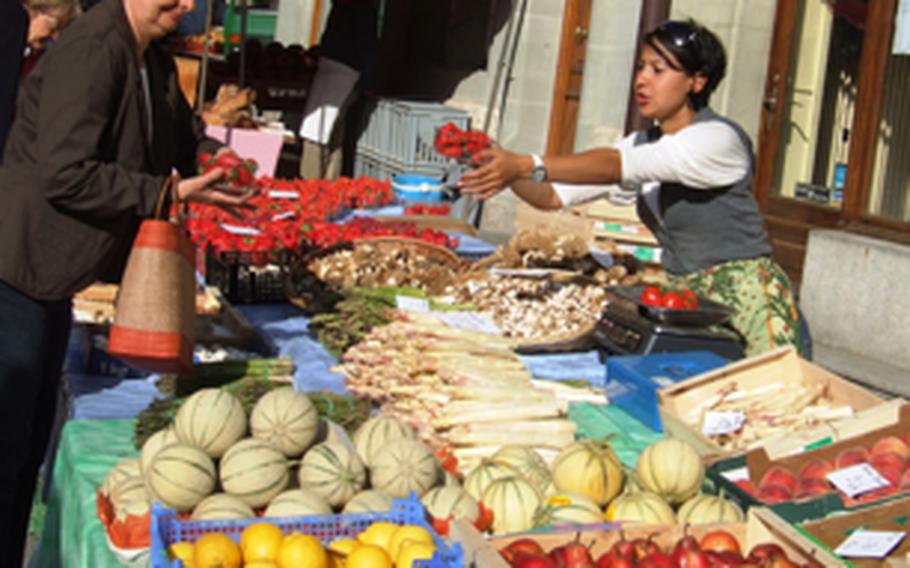 Fribourg has a bountiful farmers market every Saturday. (Leah Larkin/Special to Stars and Stripes)

I&rsquo;m not a golfer. Skiing and cycling are my sports. But if it helps me get to know a new city, I&rsquo;m willing to give it a shot.

On a recent trip to Fribourg, a charming medieval city in central Switzerland, I was talked into a game of &ldquo;urban golf.&rdquo; A university student came up with the game as a project for the city tourist office &mdash; a way for visitors to explore the city and get some exercise.

The city tourist office rents the equipment (a golf club and brightly colored squishy rubber balls) and provides a map of the 18-hole course spread out across the city. At each hole there is a starting carpet where you place the ball, and a red stake in the distance marking the hole. Your goal is to get the ball in the hole with the least number of shots, without losing it.

For me, not losing the ball was the ultimate challenge. I crawled amid the dirt and weeds under a set of steps to retrieve the ball once, and ran down a wild shot as it rolled along a fence just before it went into the river. While my golf score was pitiful, my retrieval skills were superb.

Even if you&rsquo;re not chasing misdirected balls, the course is a calorie burner, and a good way to get around the city. Fribourg is divided into two sections &mdash; the Basse Ville, the historic old town on the banks of the Sarine river, and the newer upper town, some 330 feet higher. A steep set of steps connects the two. Urban golfers have to trek between the upper and lower levels, and even up a long hill on the city&rsquo;s edge to complete the course. Along the way there are great views of city rooftops, rugged cliffs towering over the old town, the river and distant mountains.

The student who came up with the urban golf concept is one of 10,000 at the city&rsquo;s university, the only one in Europe to award degrees in French and German. The city, which is on the dividing line between the German- and French-speaking sections of the country, has more French speakers than German, although in the distant past the opposite was true. Fribourg was founded in 1157, with its name derived from the German frei (free) and burg (fort).

The old town is a medieval treasure. You can wander across its bridges, along twisting, skinny streets, past ancient fountains and Gothic houses with or without a golf club.

The pleasant city of 33,000 is also noted for excellent cuisine (12 gourmet restaurants) and native-son artist Jean Tinguely (1925-1991), famous for his odd moving creations made of mechanical scraps and other used materials. A city park contains a fountain by Tinguely symbolizing a car crash, which pays tribute to Formula I racer Jo Siffert, a Fribourg-born driver who died in a racing accident in 1971.

Also in the amazing category is Fribourg&rsquo;s funicular, which dates to 1899, when it was constructed using waste water for power. It connects the upper and lower towns and is still powered with recycled water. &ldquo;Ecology before our time,&rdquo; is the way a tour guide put it.

Another don&rsquo;t-miss site is the Gothic cathedral St. Nicholas, a city symbol with its 245-foot-tower jutting above the town&rsquo;s red rooftops. Its stained glass windows by Polish painter J&oacute;zef Mehoffer are outstanding examples of religious art nouveau.