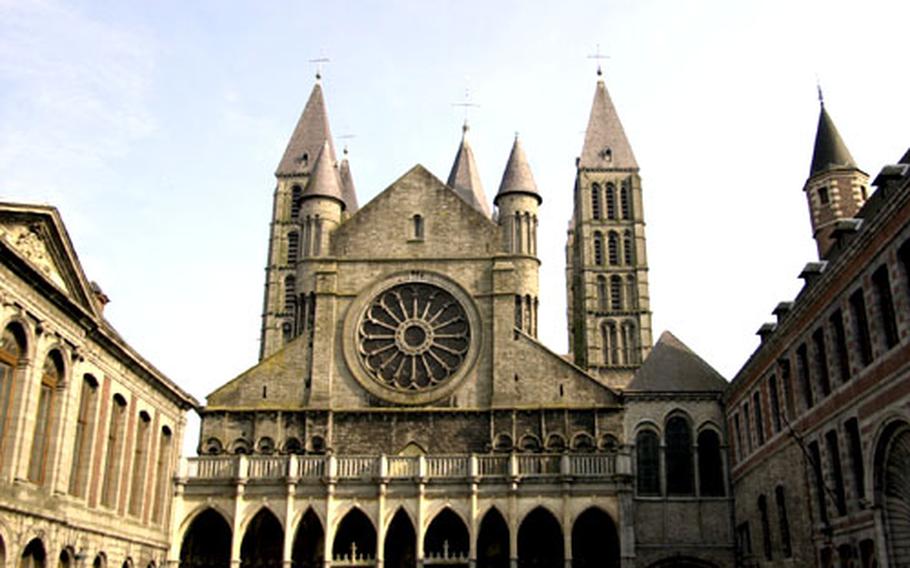 The Notre-Dame cathedral in Tournai, Belgium, was consecrated in 1175. (Michael Abrams / S&S)

The Notre-Dame cathedral in Tournai, Belgium, was consecrated in 1175. (Michael Abrams / S&S) The Pont des Trous, a 13th-century fortified bridge, still stands over the Schelde river. It was part of the old city wall, and controlled river entry to the town. (Michael Abrams / S&S) The Grand Place (main square) of Tournai, Belgium. At right is the Belfry, built between the 12th and 14th centuries, and at left one of the five towers of Notre-Dame cathedral peeks over the rooftops. (Michael Abrams / S&S) 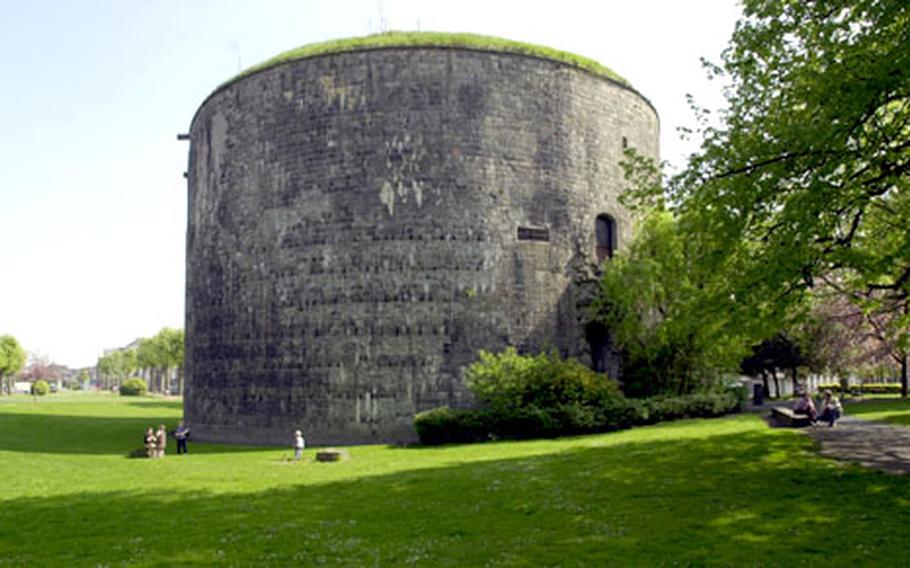 A dog has his day playing with the water spouts of the fountain on the Grand Place. (Michael Abrams / S&S)

Although it is in Belgium, Tournai can almost be considered the heart of France.

Not because the city is in Wallonia, the French-speaking part of Belgium, but because it was here that Clovis, the fifth-century Frankish king, was born. And it was from here that he set out to conquer many small kingdoms and unite them into what is now known as France.

In its 2,000-year history, the city, about 30 miles northwest of Mons and about 53 miles southwest of Brussels on the Scheldt river, has seen plenty of conquerors and kings.

Founded by the Romans, it went on to be ruled by the Franks, France, Flanders, France again, England under Henry VIII, Spain, France again, the Habsburgs and the United Netherlands. Finally in 1830, Tournai was incorporated into Belgium. The 20th century saw the city heavily damaged and occupied by the Nazis during World War II.

Its heyday was the 15th century, when the city&rsquo;s carpet makers prospered and its school of painting led by Robert Campin and Rogier van der Weyden was world famous.

Today, Tournai &mdash; known as Doornik in Flemish &mdash; is a little shabby on the edges, located in an economically depressed region of Belgium. But its massive cathedral, its belfry, its 13th-century Pont des Trous spanning the Scheldt and its wonderful main square, the Grand Place, make it worth a visit.

The Cathedral of Notre-Dame, a mix of romanesque and Gothic styles, was consecrated in 1175. It is rather unusual with its five bell towers. The center tower, at 272 feet, is the tallest.

The north and south doorways are adorned with 12th-century sculptures. Inside, the nave is romanesque and the choir is pure Gothic.

In the Chapelle de St.Louis there is a painting by Jordaens called &ldquo;Crucifixion&rdquo; and &ldquo;Purgatory&rdquo; by Rubens hangs in the Chapelle du St.-Sacrement. The Treasury has an excellent collection of religious art including beautiful medieval tapestries.

Tournai&rsquo;s 236-foot high belfry was built between the 12th and 14th centuries and is Belgium&rsquo;s oldest. It was built to mark a historic event: the recognition of the commune by Louis Phillipe as a vassal of France.

Across the river, off busy Rue de Pont, is Rue Barre St. Brice. On this narrow street stand two romanesque houses from the 12th century. The two, numbers 12 and 14, are possibly the oldest private houses in Europe. Closer to the station in what is known as the Quartier du Chateau, or castle district, stands the massive Tour Henri VIII, the last remnant of a citadel built here by Henry VIII in the early 16th century.

To cross back over the Scheldt, wander down to the Pont des Trous, the fortified bridge that was part of the old city wall. Built in 1290, it controlled entry to the town via the river.

Two museums worth checking out are the Folklore Museum in the 17th-century Maison Tournaisienne just off the Grand Place, and the Musee des Beaux-Arts, the fine arts museum with a collection of works by van der Weyden, Bruegel, Rubens, Manet, van Gogh and Monet.

The Grand Place is a large triangular marketplace, lined with caf&eacute;s and restaurants. At one end stands a statue of Christine de Lalaing, who led the defense of Tournai during a 16th-century siege. On one side is the renaissance Cloth Hall, a remnant of the city&rsquo;s rich carpet trade.

A playful fountain runs down the middle of the square, attracting kids and dogs alike. On a sunny Sunday the square will be full of people drinking coffee or strong, dark trappist beer. Or enjoying a specialty of Belgium, moules et frites &mdash; mussels and fries.

One could spend the better part of an afternoon here watching the children play in the fountain and the rest of the world pass by.

Where: Tournai, known as Doornik in Flemish, is in western Belgium about 30 miles northwest of Mons. Coming from Mons take A7 and A16 toward Lille, France, exiting at Tournai. From Brussels, take A8 and highway N27 to Tournai.

When: Late spring through fall is a good time to go, but you can visit the city and its cathedral all year round. Most museums are closed on Tuesday.

On the Web: Go to www.tournai.be.