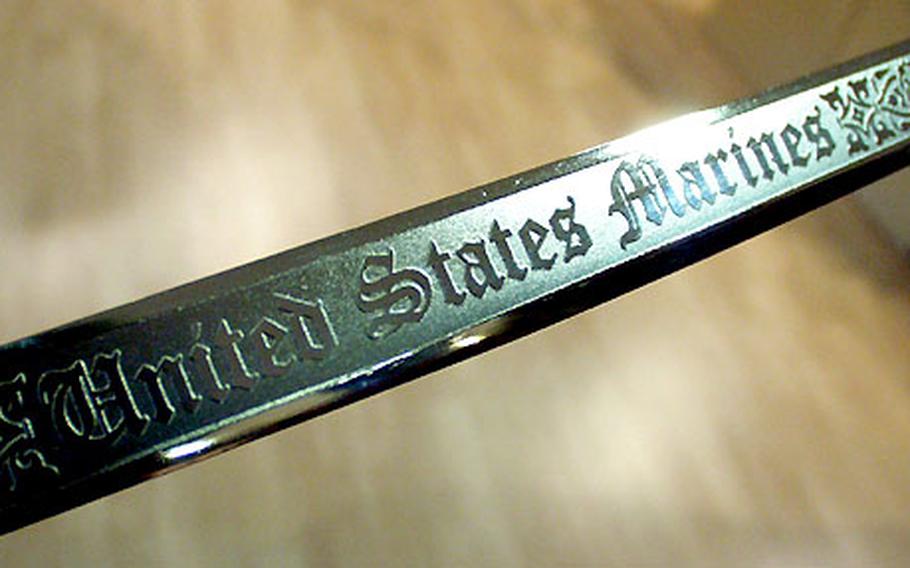 The sword gallery below the Casa A. Garrido shop in Toledo, near the city’s cathedral, was a sword factory centuries ago. (Scott Schonauer / S&S) 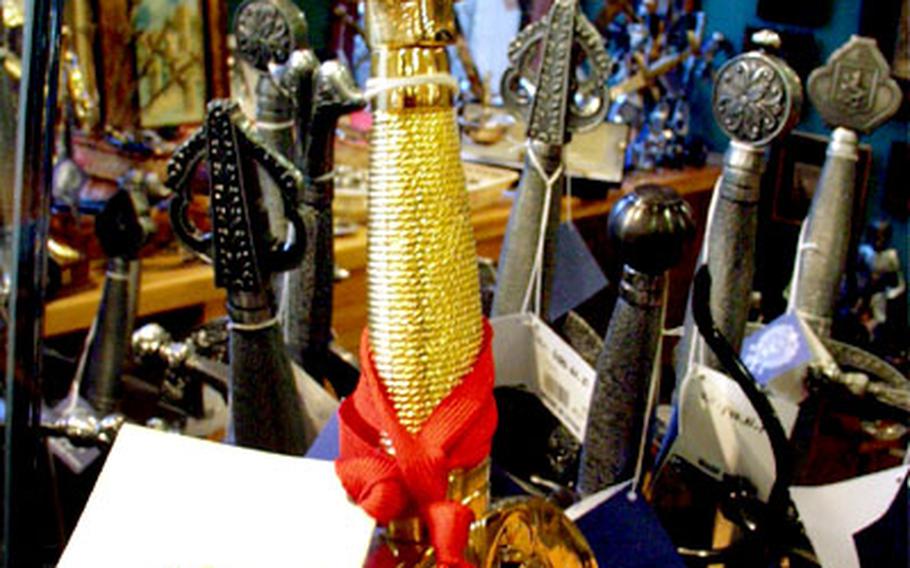 A collection of swords, some with ornate handles, for sale at Swords from Toledo. (Scott Schonauer / S&S) 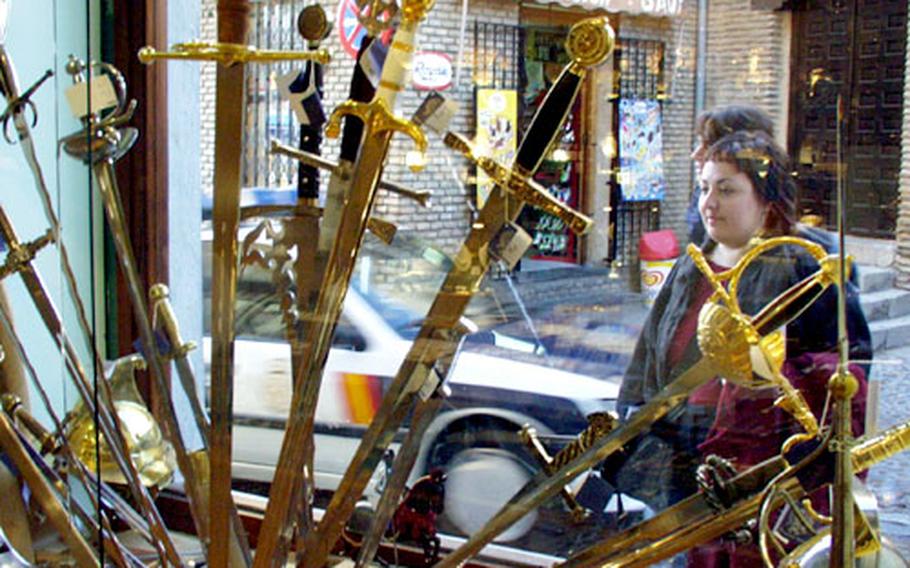 A window shopper takes a look at the display at the Swords from Toledo shop in downtown Toledo. (Scott Schonauer / S&S)

Centuries ago, when men truly lived and died by the sword, many of the greatest warriors carried them. The superior craftsmanship and hardness of the Spanish blades made them the brand of choice among kings and conquerors. Toledans still make swords.

While ceremonial swords from their shops remain a favorite among military units worldwide, collectors and tourists make up a large portion of the customers. The famous swords also are a favorite holiday gift, especially for that hard-to-buy-for guy on the list.

Sword shop owner Angelines Garrido, who operates what she believes to be one of the first sword-making factories in the city, said some of her best customers are American GIs.

But you don&rsquo;t have to go to Toledo to buy.

A simple Internet search will turn up numerous wholesalers offering a huge selection. Two gift shops at the Navy base in Rota, Spain, also sell swords from Toledo, and a store in town sells a wide selection. Engraved swords are hugely popular among sailors stationed at the Navy base.

The best deals, however, can be found where the swords are made, in the heart of Toledo.

A visitor to the historic hilltop town southwest of Madrid will find dozens of shops hawking swords ranging from the Middle Ages to replicas used on Hollywood movie sets.

One of the more popular shops is the aptly named Swords from Toledo. It&rsquo;s a short walk from the city&rsquo;s Gothic cathedral. The small, family-owned company with only 15 employees serves mostly wholesale importers, but individual buyers also can find their favorite design at the shop. Swords and daggers range in price from $35 to a gold piece that costs more than $12,000.

As her father&rsquo;s swords began to grow in demand, his shop began to expand. He decided to open a factory that now turns out hundreds of daggers and swords each year.

Most swordmakers such as Maeso&rsquo;s father use some of the same techniques that were implemented generations ago.

More than 2,000 years ago, Spanish blacksmiths began making iron blades, known as falcatas. Through the years, they perfected the craft and put Toledo on the world&rsquo;s sword-making map.

The great African general Hannibal adopted the Toledan swords for his army. The Roman legions took notice of the quality of Spanish steel and used them. Japanese Daimyos, or feudal lords, also went to Toledo to forge their katanas and wakizashis for their samurai warriors.

The secret to forging the finest sword was well guarded in crude factories for years. Even now some producers are leery about letting outsiders watch their craftsmen work. A few offer tours but most do not.

The key to the metallurgical mastery is in the tempering. Years ago, swordsmiths, without any measuring instruments, judged the right temperature by the color of the red-hot steel. They calculated the immersion time by reciting prayers, poems or songs.

Legend has it the waters of the Tagus River contained a natural recipe that allowed sword cutlers to craft the perfect blade.

At the Toledo City Hall, there is a list of the most famous sword makers, the town&rsquo;s version of a shrine to the craftsmen. Alonso Sahg&uacute;n the Old made some of the area&rsquo;s finest swords in the 16th century and is considered the best.

Today, most of the swords offered in Toledo&rsquo;s tiny shops are replicas of the masters&rsquo;.

It is hard to walk Toledo&rsquo;s street without stopping to admire the work. But judging quality can be a challenge for someone who doesn&rsquo;t know the difference between a rapier and a saber. Retailers advise buyers just to get the one that catches their eye.

&ldquo;You have to see many swords to compare the quality,&rdquo; Maeso said. &ldquo;I still have to ask sometimes which is good and which isn&rsquo;t.&rdquo;

Fortunately, there are alternatives to those who would rather not take the chance on an expensive sword, but still want a Toledan blade. Many shops sell tiny replica swords that can be used as letter openers or desk ornaments.

Not only are they less expensive. They&rsquo;re also easier to wrap.