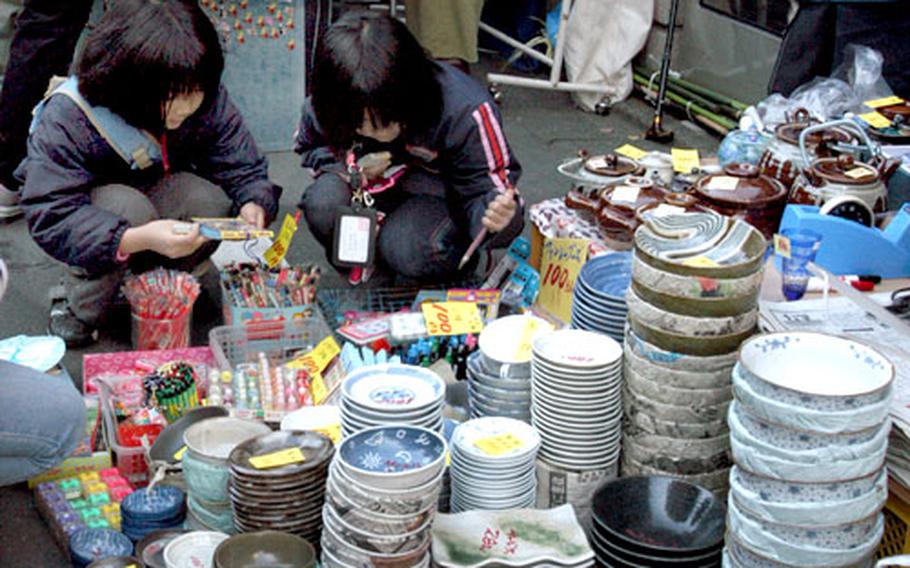 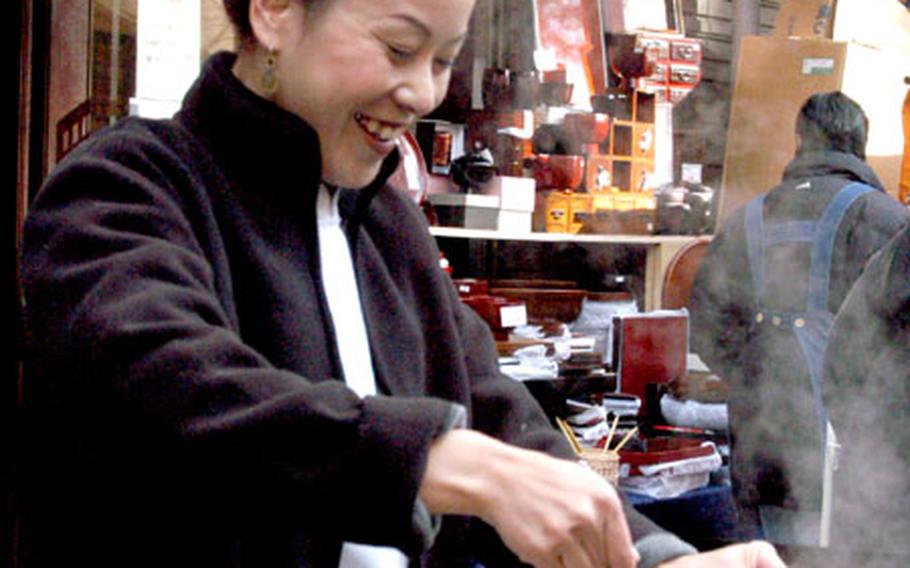 Noriko Komiyama, a worker at Platino restaurant on Boro-ichi dori, serves hot cocoa for the shoppers to warm up while shopping on a winter morning. (Sharen Shaw Johnson / S&S) 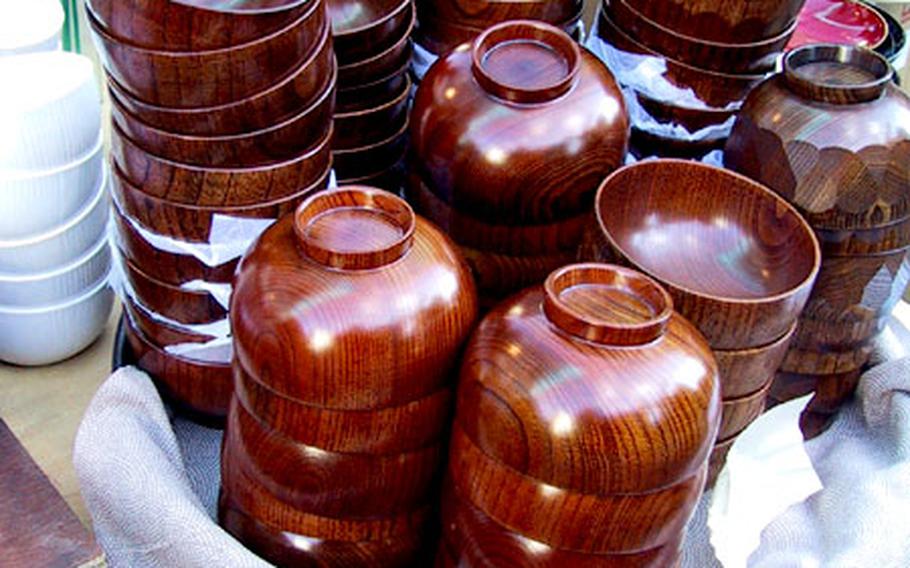 Stacks of polished wooden bowls, for soup or salad, were sold at the large December Boro-ichi flea market in Tokyo. The lacquered wooden bowls are a traditional Japanese art form — but because plastic imitations can be difficult to detect, this merchant had a bowl which had been vertically sawed in half to demonstrate it was the more desirable wood. (Sharen Shaw Johnson / S&S) 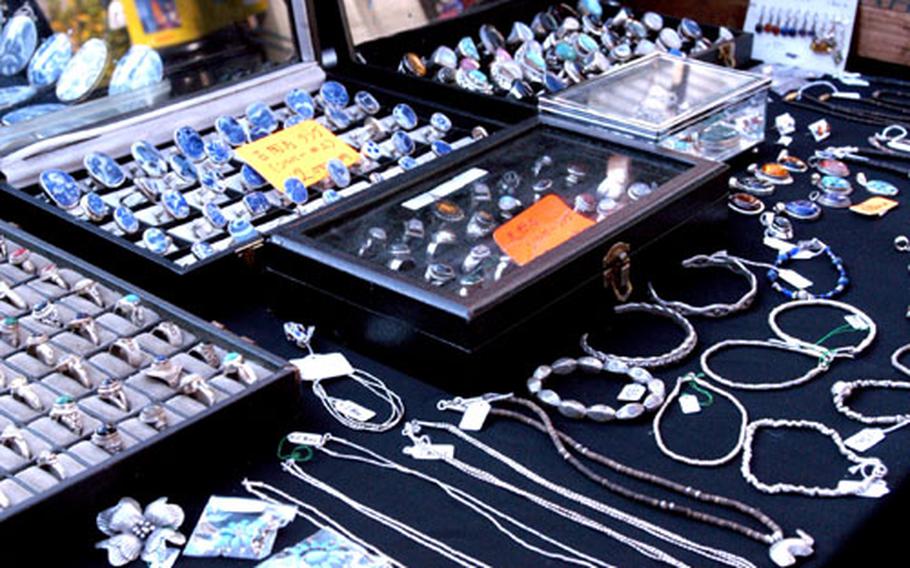 Vendors at Boro-ichi offer clothing, above, and accessories, below, such as silver necklaces, bracelets, broaches and rings with turquoise, lapis, old pieces of Japanese, Chinese and Vietnamese ceramics and more. (Sharen Shaw Johnson / S&S) A shopper makes a deal for an item with one of the merchants. (Sharen Shaw Johnson / S&S)

Make it even narrower by letting 700 merchants set up booths along the sidewalks to hawk everything from 3-foot ceremonial drums to 3-inch bonsai.

Then, just to make navigation really interesting, throw in a few school bands drumming, trumpeting and forcing their way through the crowds.

Welcome to Boro-ichi, the Rag Fair, Japan&rsquo;s version of shopping as a contact sport.

Held for two days in mid-December and again in mid-January (Jan. 15-16), it&rsquo;s Japan&rsquo;s biggest and most famous flea market.

And as a way to procure handmade Japanese hunting knives and tools, antique samurai sword scabbards, 35mm cameras and vintage watches, car and motorcycle models &mdash; in other words, the real gear you won&rsquo;t find in souvenir shops &mdash; think of it as Japan&rsquo;s ultimate rumble through the jumble.

It should be: The place has had literally half a millennium to get it right. It dates to 1578. To entice money to flow into his castle town, the lord of Odawara Castle gave permission for a market where unlicensed merchants could do business.

The market caught on &mdash; and a few hundred years later, so did the name Boro-ichi. &ldquo;Boro&rdquo; means rags; &ldquo;ichi&rdquo; means market. In the post-samurai era, rags sold briskly; they were used to make farmers&rsquo; work clothes and the straw sandals that many Japanese wore in the dark ages before Nikes were invented.

But chances are eventually, almost anything else will show up at Boro-ichi, vendors said. No guarantees; in fact, not knowing what you&rsquo;ll find is a core part of the flea market experience, its gestalt. But here are items Boro-ichi vendors say usually are for sale &mdash; and that were being offered at this year&rsquo;s Dec. 15-16 market:

Wear comfortable shoes and heavy enough clothes, including gloves, to be comfortable if you&rsquo;re outside for a few hours.

Bargaining is acceptable but it&rsquo;s usually kept relatively low-key in Japan &mdash; compared to a Thai street market or Middle Eastern souk, where the more vigorous exchanges can seem like a boot camp for European soccer fans. One strategy other American shoppers have indicated works at such Japanese sales: Inhale sharply, shake your head regretfully and walk away. Few shoppers make it further than five steps. Another: Simply asking, &ldquo;Can you do any better?&rdquo;

Don&rsquo;t speak Japanese? Bring a pocket calculator with a fairly large display. Hand it to the dealer, pointing to the item. He&rsquo;ll probably type in his price. Don&rsquo;t like it? Type in a counter-offer.

If you haven&rsquo;t already, memorize these three words: &ldquo;Sumimasen&rdquo; (excuse me) and &ldquo;arigato gozaimasu&rdquo; (thank you). Use them both. Use them a lot.