The multi-national face of Fasching 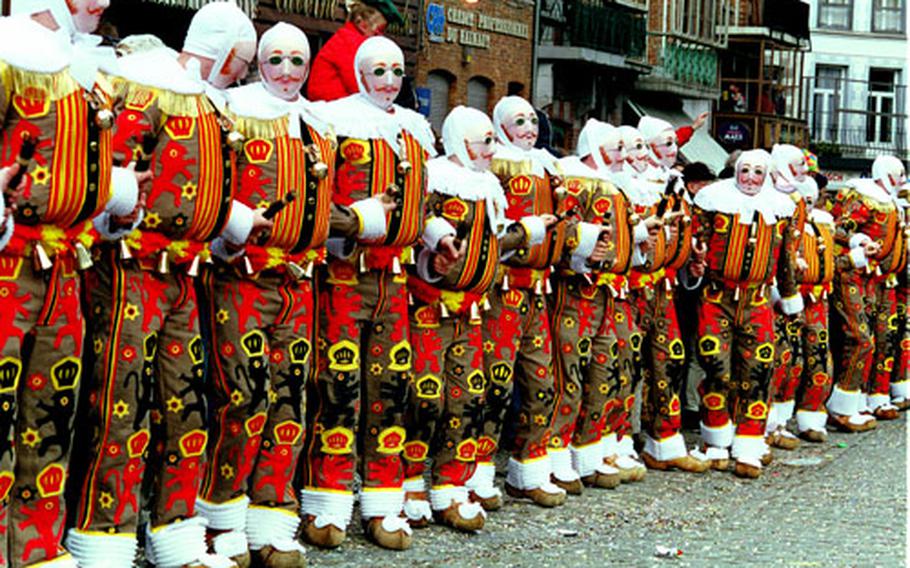 In Binche, Belgium, members of local carnival clubs, the Gilles, display traditional orange costumes and wax masks. These strange masks with mustaches and green glasses, worn by men only, are unique to the Binche festivities. (Peter Jaeger / S&S)

In Binche, Belgium, members of local carnival clubs, the Gilles, display traditional orange costumes and wax masks. These strange masks with mustaches and green glasses, worn by men only, are unique to the Binche festivities. (Peter Jaeger / S&S) 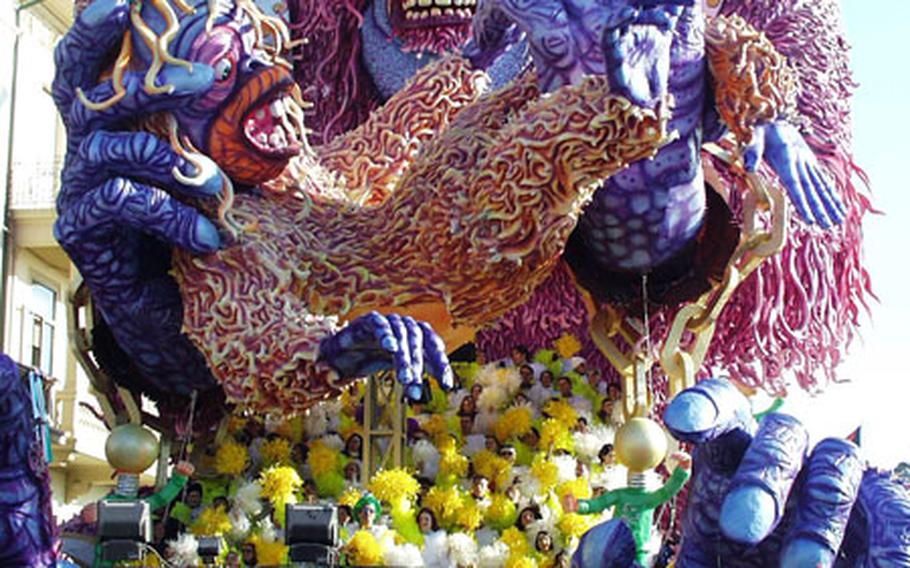 A huge float at a previous Carnevale in Viareggio, Italy, shows that not everything about carnival is light-hearted. Whimsical as it may be, the float focuses on experimentation on animals. (Kent Harris / S&S) 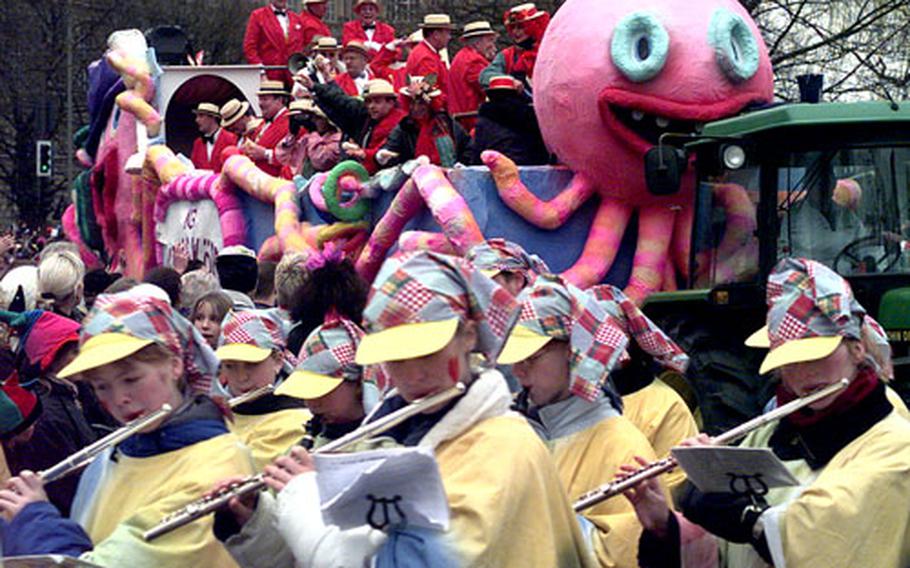 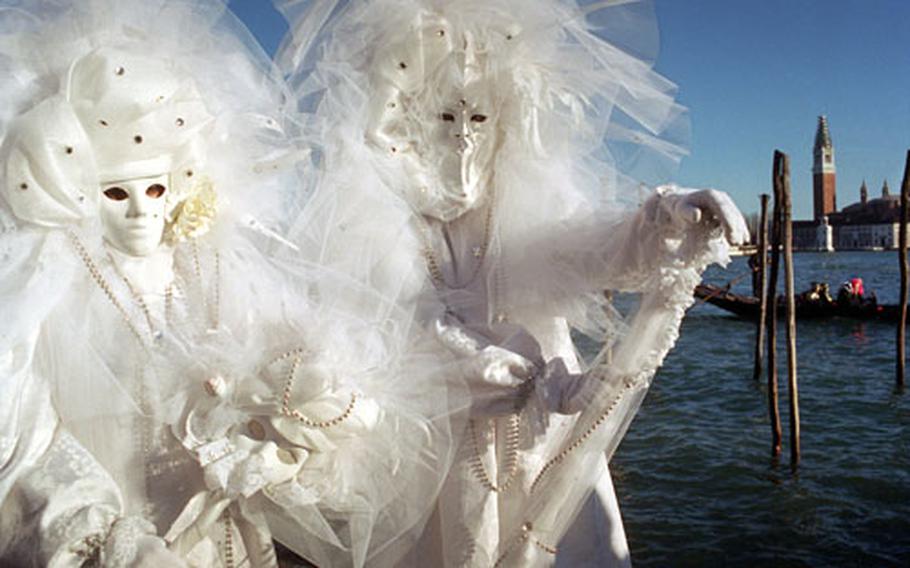 In Venice, the mood is mysterious and elegant. Costumed participants in elaborate and sophisticated costumes pose for photographers during Carnevale celebrations. (Michael Abrams / S&S) 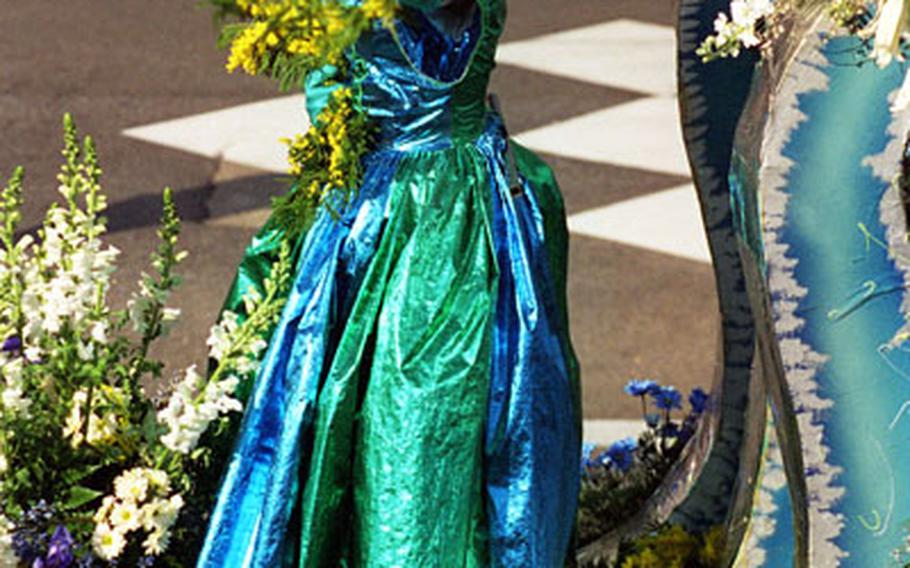 Waving a branch, a woman riding on a flowery float passes the crowd at the Bataille de Fleurs in Nice, France. (Michael Abrams / S&S)

It is called many things, and is celebrated in many ways, this crazy season before Lent.

In Italy it is called Carnevale. In Germany it might be Fastnacht, Fasnet, Fasching or Karneval, depending on where you are. In Nice, deep in the south of France, it&#8217;s called Carnavale, and across the ocean, in New Orleans, despite hurricanes and floods, Mardi Gras will go on.

No one knows for sure how the tradition started and how it got its name, but some trace the celebrations to the pagan custom of driving out the evil spirits of winter, while others say it is rooted in ancient Greek celebrations for their god of wine, Dionysus. For the Christians, it became a time to eat, drink and be merry before the stark days of Lent, which precedes Easter.

The name most likely comes from the Latin Carne Vale, meaning &#8220;meat, farewell.&#8221; Fastnacht, as it is called in Germany, literally means &#8220;fast night,&#8221; referring to the night before fasting begins on Ash Wednesday.

Whatever the origins of the names and customs, from now until Ash Wednesday it is time to party, party, party.

In Italy, the highlights of Carnevale are the celebrations in Venice, Viareggio and Acireale on Sicily. The carnival in Viareggio dates to 1873 when some citizens decided to parade floats up and down the main street of the city. Today, Viareggio is one of the carnival capitals of Italy.

On the two weekends before Ash Wednesday, Venetians celebrate Carnevale di Venezia. Dressed in flamboyant masks and elegant costumes, mysterious characters roam the lanes of Venice, posing for tourists in the Piazza San Marco, on the city&#8217;s bridges and piers, or glide by in gondolas on the canals. In the evenings there are fancy balls, usually expensive and mostly sold out.

The two capitals of Croatian carnival are Rijeka and Split. The high point of the Rijeka celebrations is the international parade on the Sunday before Ash Wednesday. In Split, it is also costumes, merriment and foolery that make the carnival season a crazy time of celebration.

In France, Nice on the Cote d&#8217;Azur is the place to be. His Majesty King Carnival rules here. Under the motto &#8220;King of Dupes,&#8221; the highlights of this year&#8217;s carnival are, as always, the bataille de fleurs &#8212; battle of flowers &#8212; parades with colorful floats adorned with flowers and beautiful women pelting the spectators with blossoms; and the Mardi Gras parade with King Carnival on his own float. The fun lasts until the Bonfire Parade on Mardi Gras evening, when King Carnival is set afire on the sea.

In the Benelux, head for Binche in Belgium or Maastricht in the Netherlands for carnival fun. In the early hours of Shrove Tuesday, the drummers of the Gilles society &#8212; dressed in striking orange costumes and wearing masks with eyeglasses, a beard and mustache painted on them &#8212; drum up their members. Between 10 a.m. and noon, they perform in front of the city hall. Then the Grand Parade winds its way through the city, with the Gilles throwing oranges to the crowd. (Don&#8217;t throw back!)

In Maastricht, it is party time from 12:11 p.m. on the Sunday before Ash Wednesday, when the Mooswief, an effigy of a city statue, is raised on a mast, until it is lowered at exactly midnight Wednesday.

In between, it is one big carnival on the city streets. It starts Sunday with a parade and on Monday there&#8217;s a parade for children that everyone is invited to. On Shrove Tuesday, the partying gets going at 12:11 p.m. with the Herrenmenikes contest. All the Zaate Herrenmeniekes, or Carnival bands, walk through town, playing in bars and ending up on a town square where a jury selects the best band.

Carnival in Cadiz, Spain, starts on the Thursday before Ash Wednesday and lasts until the Sunday following, making this one place where the fasting starts a little later. The Cadiz carnival is about song. Choirs and vocal groups on floats pass through the city, singing to spectators. In the evening, 150 groups perform in bars and bodegas during the 10-day spectacle. In the end a jury picks the winners. The main parade in Cadiz is on the first Sunday night.

The other party spot in Spain is on the Canary Islands. Mix carnival with a late winter vacation.

In parts of Germany, Fastnacht season begins at 11:11 a.m. on the 11th day of the 11th month and doesn&#8217;t end until the wee hours of Ash Wednesday. But here, as in the other regions where carnival is celebrated, it&#8217;s not until what the Germans call the heisse Phase, that things heat up.

The best place to ring in the hot phase is at Weiberfastnacht in Mainz or Cologne. Meaning literally &#8220;women&#8217;s Fastnacht,&#8221; women rule the streets on this day, cutting off men&#8217;s ties and singing and dancing around the Schillerplatz in Mainz and on Alter Markt square in Cologne.

The main attractions of German carnival are the giant Rose Monday parades in Mainz, Cologne and D&#252;sseldorf, where millions of people line the streets to see floats, usually with wry political themes, marching bands and clowns. The beer flows, and from the floats, candy flies to the Fastnacht greetings of Helau! (in Mainz) or Alaaf! in Cologne.

In the Black Forest, where carnival is called Fasnet, celebrants wear colorful costumes and wooden masks that look like old women, wild animals or witches. The characters are known to crack whips, bonk people with inflated pig bladders and stuff confetti down your back.

The most famous of the Black Forest celebrations is the Narrensprung, or &#8220;fools jump,&#8221; in Rottweil on Rose Monday, and the Da-Bach-Na-Fahrt in Schramberg on the same day.

In Munich, the big day is Shrove Tuesday, when the downtown pedestrian zone between Karlsplatz and the Viktualienmarkt becomes party central. The highlight is the Tanz der Marktfrauen, where the market women perform dances on the Viktualienmarkt at 11 a.m.

Another of Europe&#8217;s unique carnival celebrations is in Basel, Switzerland, on the Monday following Ash Wednesday. The Morgenstreich begins at 4 a.m. when the lights in the city center go off.

In pitch darkness, the sound of drums and piccolos wafts through the cold night air. Closer and closer it comes, with faint lights glowing in the distance. Suddenly, from all directions, the musicians of the Fastnacht cliques appear.

For hours this eerie procession crisscrosses the old town playing. At dawn it is over. Spectators and participants retreat into bars and restaurants, to have a drink and warm up on the traditional Mehlsuppe, a thick flour soup. In the afternoon, the bands start again and the fun continues.