The language of signs: Naples exhibit showcases Americana through highway 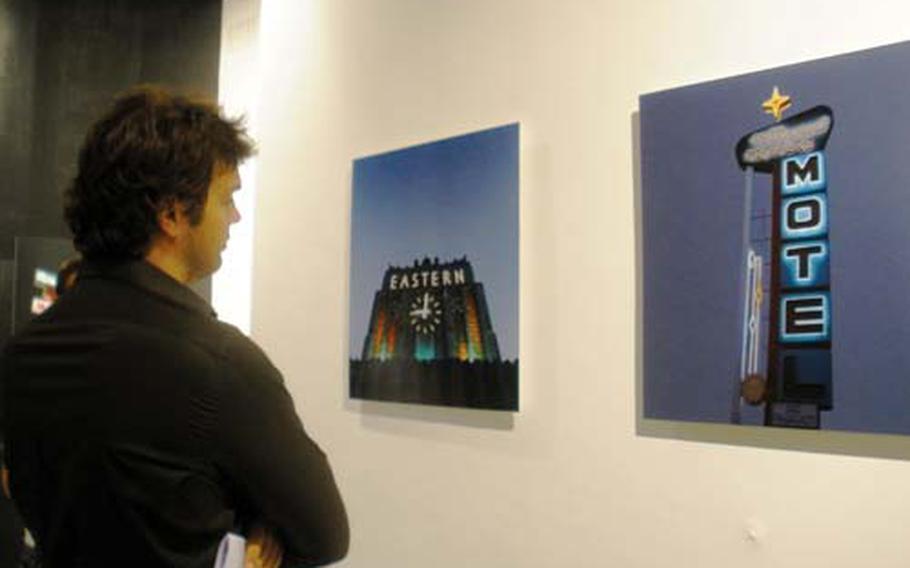 Lookin&#8217; for a little slice of post-modern Americana with a side of Jack Kerouac-nostalgia? Check out &#8220;On The Road&#8221; &#8212; an art exhibit featuring the work of American photographer Charlie Bidwell.

A selection of Bidwell&#8217;s photos went on display at the Philomarino art gallery in downtown Naples on Thursday night. Noted for his use of space, the background of many Bidwell works is disproportionate, with the actual subject taking up a mere fraction of the image.

The technique draws the viewer immediately to the image, illustrating simultaneously the smallness and largeness of objects in the world &#8212; through his lens.

Bidwell hails from Detroit, but makes his home and living in Los Angeles and Hollywood. His photography reflects the icons of the manmade landscapes of the Southwest, as well as the distinctly American architecture of buildings such as New York City&#8217;s World Trade Center and Guggenheim Museum.

Many of his pictures evoke the desolation of the open highway at night &#8212; the illuminated sign of a lonely Mobile gas station against an ink-black sky, the neon sign of Reno&#8217;s Thunderbird Motel, an isolated view of the iconic Las Vegas Stardust hotel sign.

The exhibit was the idea of Mauro Filomarino, the former director of the gallery. While researching Kerouac he came across Bidwell&#8217;s photos.

Filomarino&#8217;s daughter, 24-year-old Eleonora Filomarino, the new director of the gallery, said she was emotionally moved by Bidwell&#8217;s work and its simplicity.

For Gianni Piscitelli, a Naples resident visiting the gallery for the first time, the exhibit reminded him of time he spent in the U.S. during the late 1970s. He said many of the pictures remind him of how much American culture has made its way to Italy.

Thursday&#8217;s event included the music of Antonio Onorato, a noted Neapolitan fusion guitarist, playing an electric and acoustic set against a video backdrop of Bidwell&#8217;s black-and-white images. The exhibit also served as the launch for the gallery&#8217;s new name.

Formerly known as Entropy Art, it now goes by Philomarino Arte Contemporanea. The Bidwell exhibit is free and runs through the end of July.