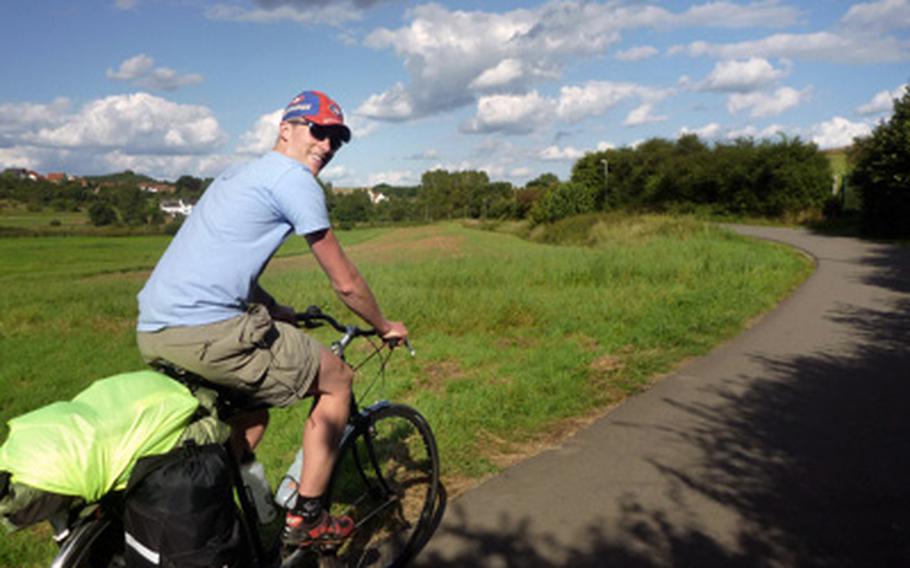 Buy Photo
Nick Schulte cruises through a typical countryside scene near Steinwenden, Germany, not far from Ramstein Air Base at the end of the two-day bike tour. (Ben Bloker/Stars and Stripes)

Buy Photo
Nick Schulte cruises through a typical countryside scene near Steinwenden, Germany, not far from Ramstein Air Base at the end of the two-day bike tour. (Ben Bloker/Stars and Stripes) 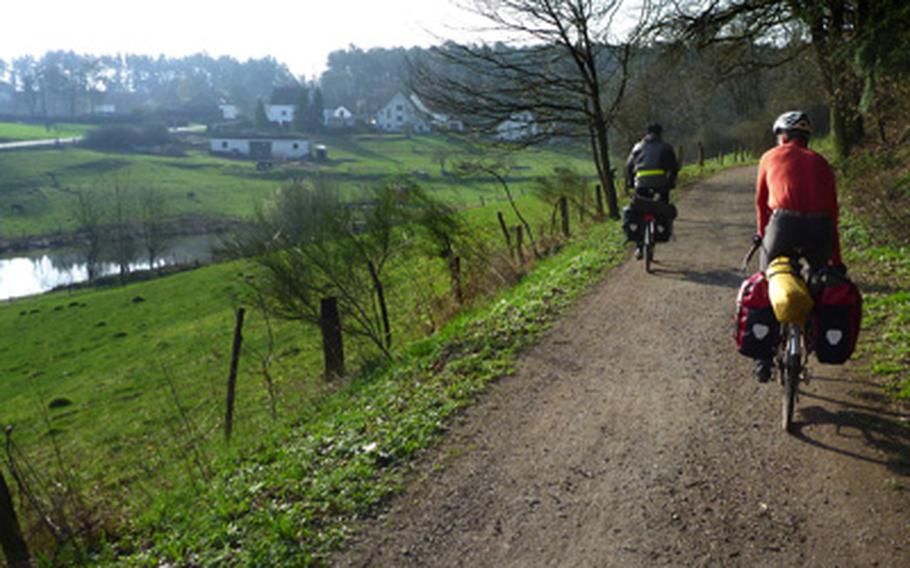 Buy Photo
This stretch of the Glan-Blies-Weg is wide and flat and goes through beautiful scenery. Luke Stover, right, and Nick Schulte ride in the early morning near Schönenberg-Kübelberg in Germany on an overnight trip in the spring retracing part of the bike trip to France. (Ben Bloker/Stars and Stripes) Buy Photo
After entering France, riding partner Nick Schulte and writer Ben Bloker toured through several small villages. There is a sense of freedom that comes from wandering around on a bicycle that they really enjoyed during this trip. (Ben Bloker/Stars and Stripes) Buy Photo
This picnic area in Waldmohr on the Glan River is an amazing stop along the Glan-Blies-Weg. (Ben Bloker/Stars and Stripes) Buy Photo
Reporter Ben Bloker poses for a photo on a bridge in Sarreguemines, France, during the first day of an overnight bike tour. (Nick Schulte/Special to Stars and Stripes) 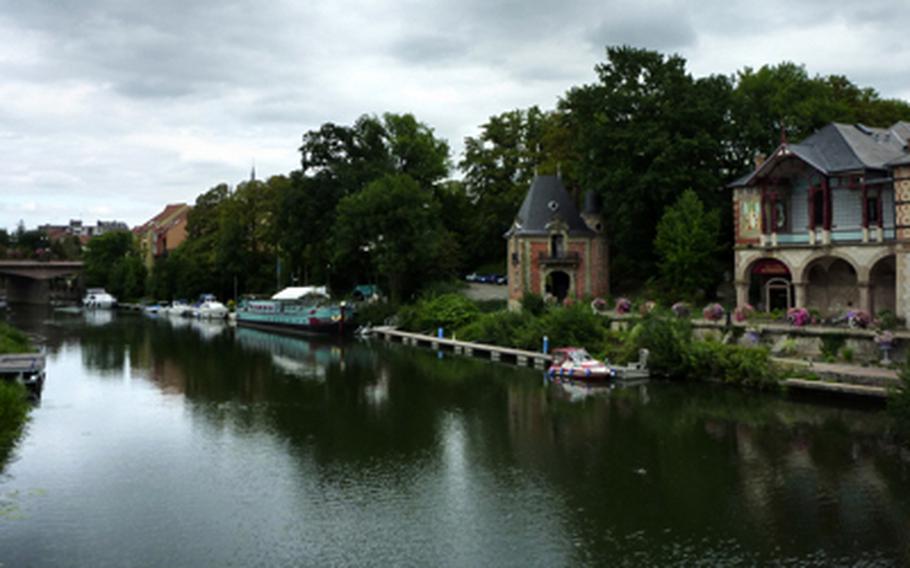 Buy Photo
The waterfront of the French town of Sarreguemines is lined with picturesque buildings and a variety of water craft. (Ben Bloker/Stars and Stripes) Buy Photo
Luke Stover, left, and Nick Schulte ride along the reservoir near Schönenberg-Kübelberg on the return leg of an overnight bike-camping trip in the spring that retraced part of a two-day round trip to France in the summer. (Ben Bloker/Stars and Stripes) 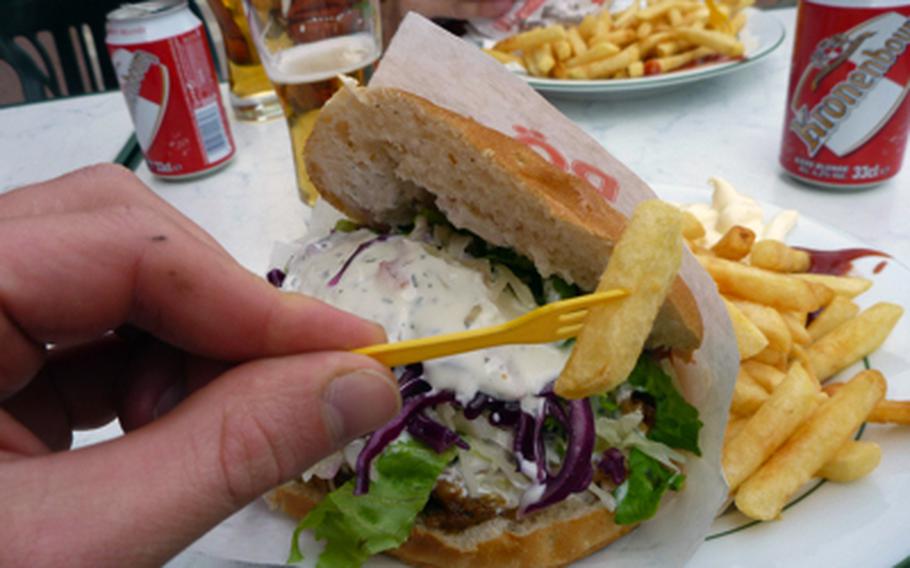 Buy Photo
Fatty foods can make for some good energy on a bike tour. French fries and a döner kebab are the tasty lunch during the cyclists' stop in Sarreguemines, France. (Nick Schulte/Special to Stars and Stripes) Buy Photo
Cyclists take a break in a tunnel on the Glan-Blies-Weg, a cycling and hiking path in western Germany that was used during a repeat cycling trip from Ramstein Air Base, Germany, to Sarreguemines, France. (Ben Bloker/Stars and Stripes) 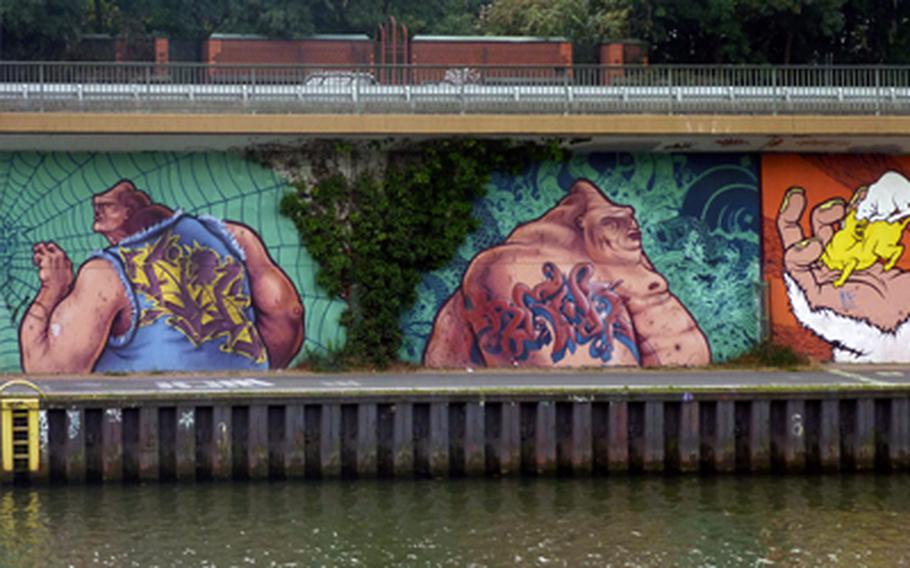 Buy Photo
Detailed graffiti murals along the Saar River in Saarbrücken, Germany, make for interesting viewing on the way to France. (Nick Schulte/Special to Stars and Stripes ) 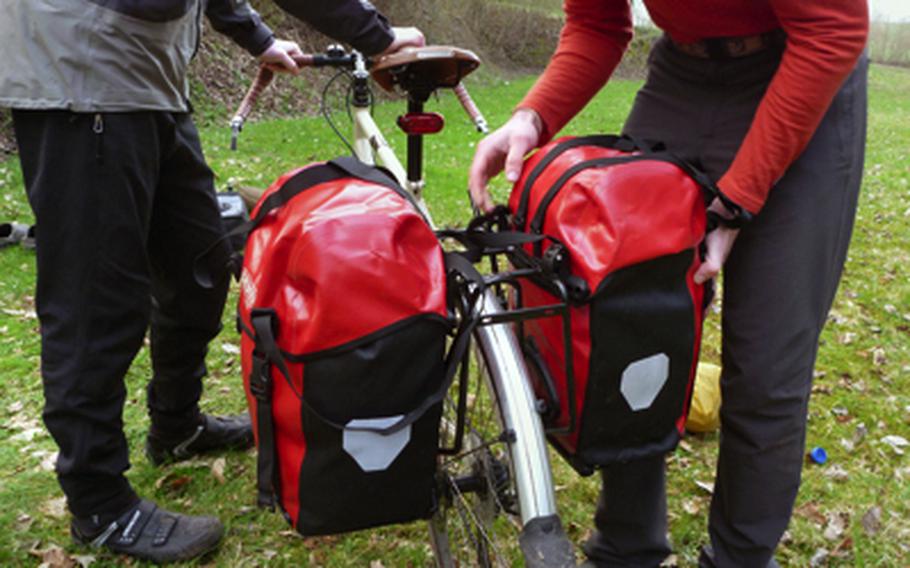 Buy Photo
Luke Stover attaches a waterproof pannier to his bike rack after a night of camping at a site near Schönenberg-Kübelberg in Germany. A rear bike rack and panniers are the nuts and bolts of carrying gear on a bike tour. (Ben Bloker/Stars and Stripes)

It started out like most seemingly brilliant ideas &mdash; hanging out with my bicycling buddy and dreaming up fun things to do on our bikes. &ldquo;Hey, why don&rsquo;t we ride our bikes to France?&rdquo; one of us said.

I consider myself a bicycle hobbyist. It&rsquo;s not my life, but I love bikes, especially cruising on dirt trails on a mountain bike. Touring, however, always seemed to be something that was slow and boring, something for those with a lot of time on their hands.

Pre-ride preparation was minimal. We rented a lightweight tent from Ramstein Air Base&rsquo;s Outdoor Recreation office and split it up for the ride. My buddy, Nick, had a commuting bike that was already tour-ready. My mountain bike required some skinny tires and the installation of a rear rack. We packed our panniers with sleeping bags, camping pad, water and extra clothing.

The sun crept in and out most of the morning as we marveled at Saarland&rsquo;s beautiful countryside. Some of our pathways paralleled busy local roads, but we were able to escape the traffic and find some solace when we hit Homburg. There, we discovered the Glan-Blies-Weg, a touring path that runs from Glan-M&uuml;nchweiler in Germany to Sarreguemines, just across the border in France. It is a great trail that we enjoyed so much, it inspired a repeat trip.

At about the four-hour mark we reached France. &ldquo;Now what?&rdquo; we both thought, shocked to have reached our only goal so soon. Break out the maps!

Our southern destination was the town of Sarreguemines. We made it by lunch and planned the afternoon&rsquo;s ride. The Saar River, which flows through the town and feeds into the Moselle, would be our guide for the rest of the day.

Cruising on a paved path, we toured through Saarbr&uuml;cken, admiring some inspired graffiti along the river, and eventually reached the town of Saarlouis, back in Germany. By then my knees were aching and the scenery had become much more industrial. We settled in for a high-carb dinner of pizza and beer, watched the sun go down on a bustling center square and pushed off for a spot to camp east of Saarlouis.

Wilderness camping in Europe is banned, but finding an organized campground in that area is extremely difficult, so we went ahead and opted for a spot of wilderness camping.

The next morning, we began our return trip. The trail network, however, proved difficult for loaded-down bikes. Surface types changed from road and paved trails to narrow single-track dirt trails with varying difficulty levels of ups and downs. At times it felt like a scavenger hunt just finding the next stretch of trail.

After growing frustrated with the very unpredictable Saarland-Radweg path &mdash; which goes from Sarreguemines to Saarbr&uuml;cken and on to Homburg &mdash; we decided to use roadways to get back to the Glan-Blies trail we fell in love with the day before. We stopped near Neunkirchen for lunch and found the trail by mid-afternoon near the town of Waldmohr, north of Homburg.

Trails like the Glan-Blies really made the trip enjoyable for us novice bike tourers &mdash; relatively flat and very scenic. A few hours later we passed under Autobahn 62 and through familiar territory a few miles from my home. What a ride! We estimated the total trip to be around about 120 miles and were able to be home for dinner on day two.

There were certainly some lessons to be learned on this trip. My aching knees were attributed to a poorly adjusted seat-post. On a couple-of-hour mountain bike ride you would never notice, but over 100-plus miles, good leg extension is important. We also would think twice next time before blindly following a bike path dictated by a map.

But we enjoyed it so much that this spring we repeated part of the journey, this time joined by another friend.

Our destination was a campground in Sch&ouml;nenberg-K&uuml;belberg, Germany &mdash; a trip more about going camping on our bikes than logging miles.

There are countless exotic and adventurous bike tours out there to be had. Some of them start right out your front door. This mountain biker fell in love with one of them, and is eager to tackle more.