Buy Photo
It took about 200 years to build the church, considered by many to be, along with the cathedral in Strasbourg, the finest Gothic church in Alsace. The church’s exterior includes a 250-foot tower. (Photos by Chris Taylor/Special to Stars and Stripes)

Buy Photo
It took about 200 years to build the church, considered by many to be, along with the cathedral in Strasbourg, the finest Gothic church in Alsace. The church’s exterior includes a 250-foot tower. (Photos by Chris Taylor/Special to Stars and Stripes) The main tympanum above the entrance to the Collegiate Church of St. Thiébaut in Thann, France, has 150 scenes with more than 500 figures. Many are still in good shape. () The Thur River runs past Thann, which sits at the southern end of the Route de Vin through the Alsace and the eastern end of the road along the ridge of the Vosges Mountains. () 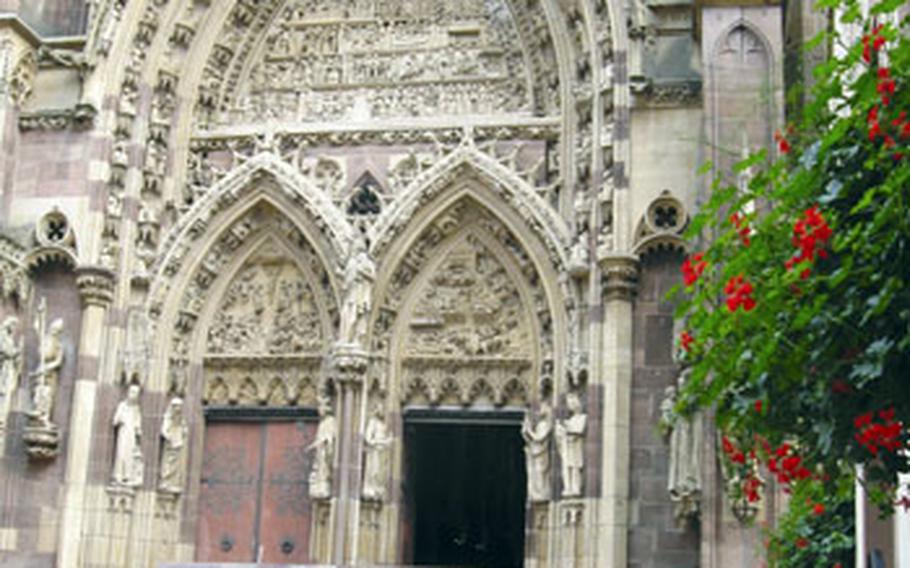 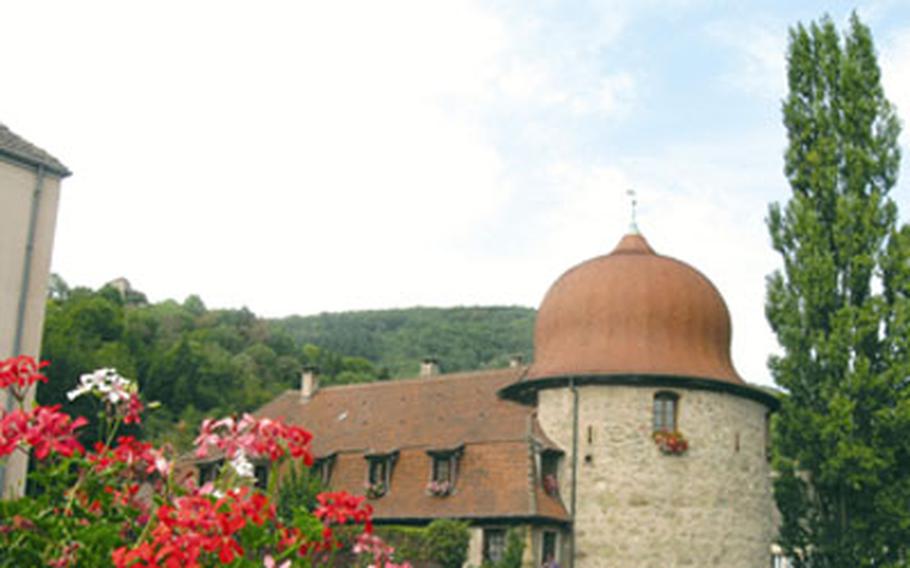 The rounded Witches Tower was once part of the town’s defensive walls along the Thur River. Today it is a museum and a stop on the town’s walking tour. ()

The small Alsatian town of Thann owes its existence to money and faith.

Thann, about 15 miles west of Mulhouse in eastern France, once sat at a key spot in the trade route running from France and the Netherlands through Switzerland and across the Alps to northern Italy.

The domain of the powerful counts of Ferrette lay along the route. To ensure they got a cut of the action, the counts built Engelbourg castle in the early 13th century at the point where the route cut through the Thur River valley and began its climb through the Vosges Mountains to the west. They used the tolls they collected to build up their influence and the town below.

It was around the same time that Bishop Thi&eacute;baut of Gubbio, a city in what is now northern Italy, died. Before he did, he told his most trusted servant to take his ring, but when the servant grasped it, the bishop&rsquo;s thumb came with it. The servant hid both in his staff and began wandering north, stopping one night in a fir forest near Thann.

When the servant awoke the next day, he found that the staff he had stuck in the ground for the night would not budge. At the same time, a local lord &mdash; possibly one of the counts of Ferrette &mdash; saw three bright lights shining above the forest.

Upon investigating, the lord heard the servant&rsquo;s story and ordered a church built at the site where the miracle had happened. It soon became a popular pilgrimage site, and as the surrounding village grew, it was decided it needed a proper church. The result was a magnificent Gothic structure that compares favorably with the better-known cathedral in Strasbourg.

Construction on the church, which began at the end of the 13th century, took more than 200 years. It is now called the Collegiate Church of St. Thi&eacute;baut, after a school for biblical studies founded there in the 15th century.

The church&rsquo;s exterior includes a 250-foot tower, glazed roof tiles that gleam in the sun and a collection of 15th-century statues. But its most impressive feature is the main doorway. A large stone arch soars over two doors, each with its own arch. Carved into the arches are scenes from the life of Christ and stories from the Bible. The main tympanum alone has 150 scenes with more than 500 characters.

Inside, white walls and soaring 15th-century stained-glass windows make it light enough to examine the statues and coats of arm spread around the church. Unfortunately the wooden choir stalls &mdash; a highlight of the interior &mdash; are roped off, making it impossible to see their detailed carvings close up.

The nearby tourist office has a small brochure and walking map to help you see the rest of the town. The tour picks up at the St. Thi&eacute;baut fountain across from the church. From the 16th century, it&rsquo;s topped by a statue of the saint and bears the town&rsquo;s coat of arms. Watch for more signs of the fir tree while walking around town.

Other sites include the old town mint &mdash; Thann had the right to make its own money &mdash; a winegrowers fountain &mdash; area vineyards have been operating continuously since the Middle Ages &mdash; and the Witches Tower &mdash; once part of the town&rsquo;s defensive walls, now a museum.

Those who want to keep going can end their tour with a 30-minute round-trip walk to the ruins of Engelbourg castle for views of the town, vineyards and river valley.

During the Thirty Years&rsquo; War in the 1600s, control of the castle changed hands seven times. When the fighting ended, France&rsquo;s border moved east from the Vosges to the Rhine River and the castle lost its strategic importance. Louis XIV ordered it destroyed.

This was not an easy task. On the third try, one of the round towers collapsed and broke into several sections, one in the form of a large stone ring. Now known as the Witches Eye, it sits atop a hill, keeping watch over Thann as the castle did nearly 800 years ago.

Know & GoEach year since the middle of the 16th century, Thann (pronounced "TANN-eh," which means fir tree) celebrates the "miracle" of its founding with a festival called the "Burning of the Three Fir Trees." The festival is held June 30.

The town has an excellent Web site, www.ville-thann.fr, packed with information on the church, town history, restaurants and accommodations. Much of it is in English.

The tourist office, with maps for walking tours and other English-language information, is on the main street, Rue de la 1&egrave;re Arm&eacute;e. From October to April, it is open 9 a.m. to noon and 2-6 p.m. weekdays and 9 a.m. to noon and 2-5 p.m. Saturdays. It has longer hours during the summer, including Sunday and holiday mornings during July and August. E-mail contact@ot-thann.fr, telephone 0033-3-89-37-96-20.