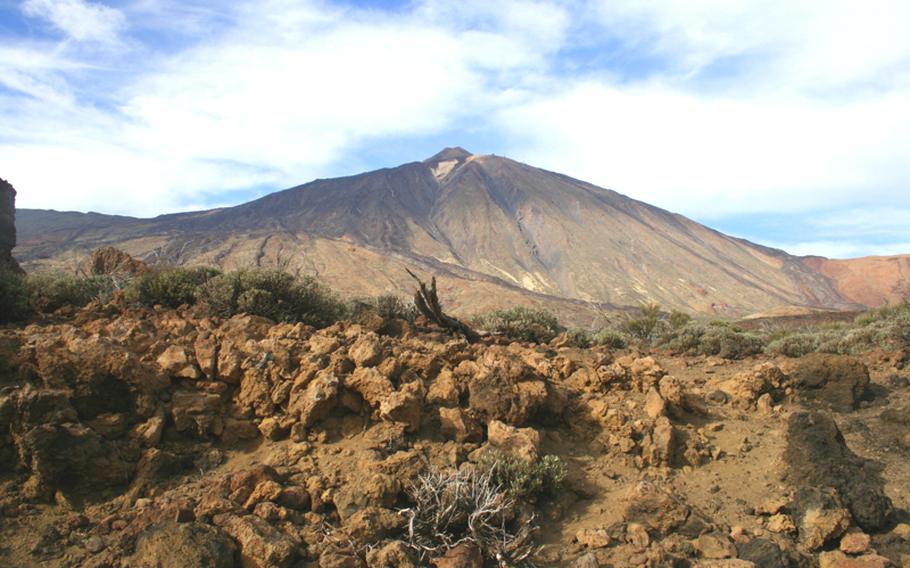 Buy Photo
At around 12,300 feet tall, Mount Tiede on Tenerife is Spain's highest mountain. Those who want to reach the peak by foot must first get a permit in the island's capital. (David Cawley/Special to Stars and Stripes)

Buy Photo
At around 12,300 feet tall, Mount Tiede on Tenerife is Spain's highest mountain. Those who want to reach the peak by foot must first get a permit in the island's capital. (David Cawley/Special to Stars and Stripes) 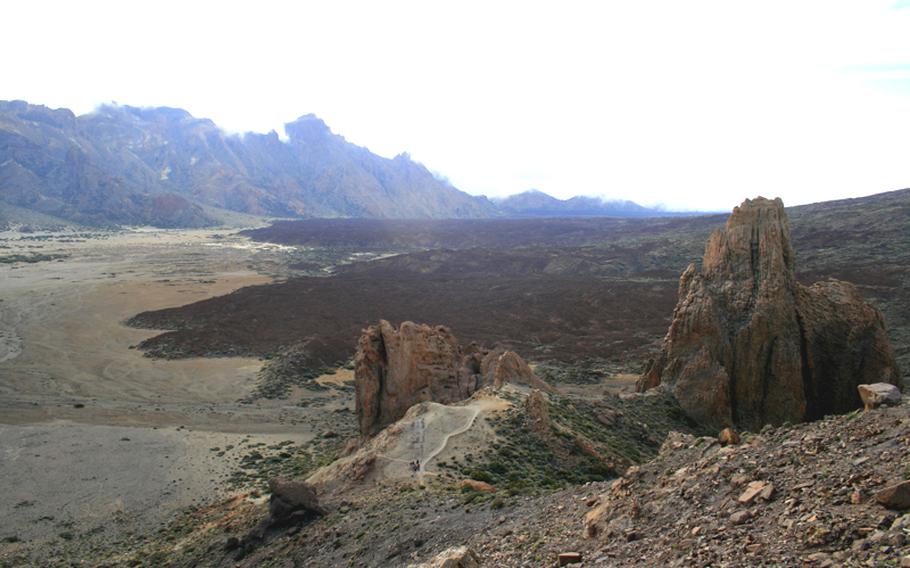 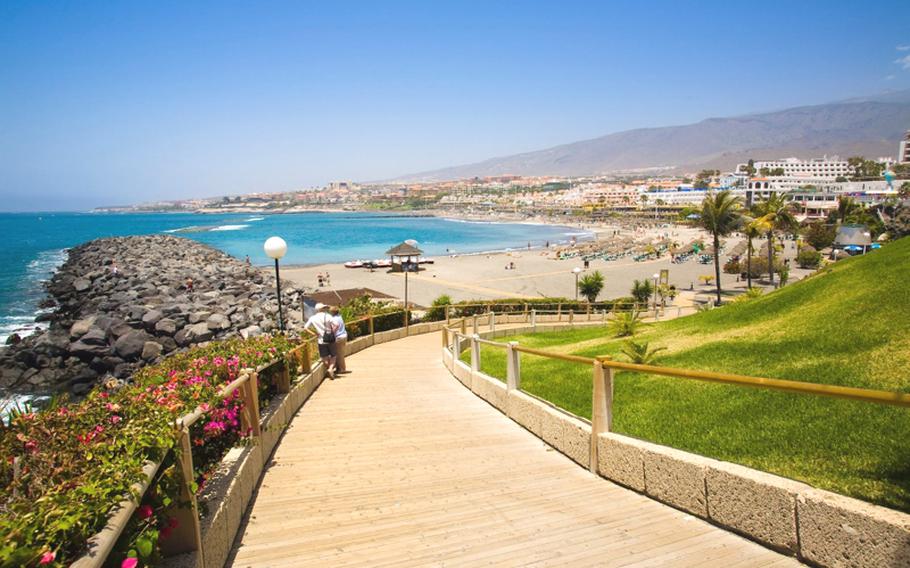 Buy Photo
The two-hour walk along the promenade between Los Christianos and La Caletta is a less taxing hike than the more-challenging hking trails on Tenerife, one of the Canary Islands. (David Cawley/Special to Stars and Stripes) 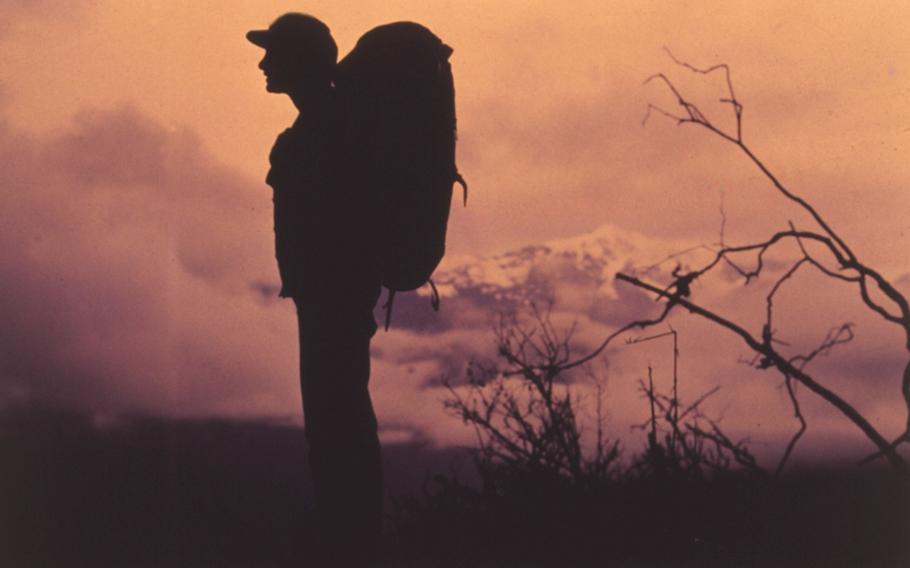 Daybreak and dusk are good times to be on hiking trails in Tenerife to see the sun's rise and fall reflected on the Atlantic ocean and nearby islands. (Courtesy of Tenerife Tourism Corporation) 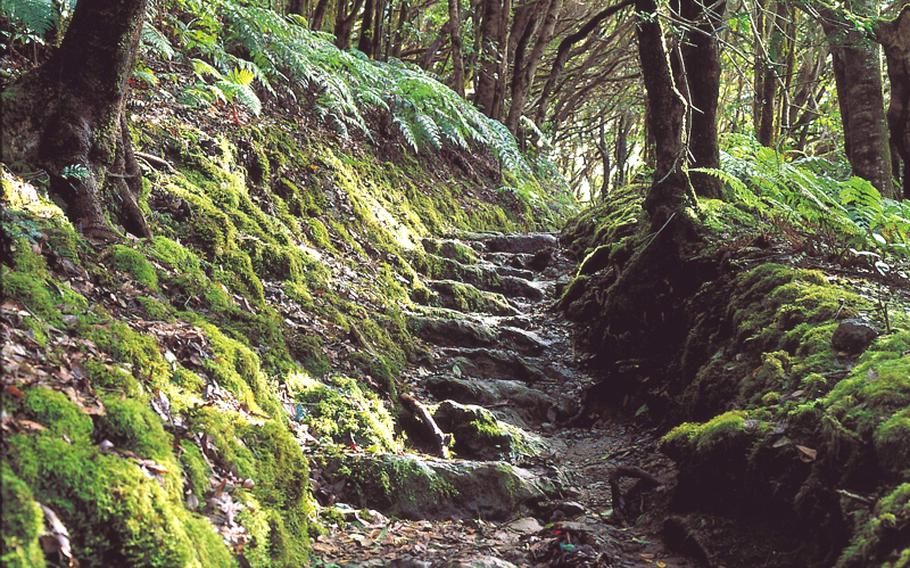 Some of the trails through the Laurissilva forests of the Anaga Mountains on the northeastern end of the island of Tenerife date back to ones used by the original people of the island. (Courtesy of Tenerife Tourism Corporation) 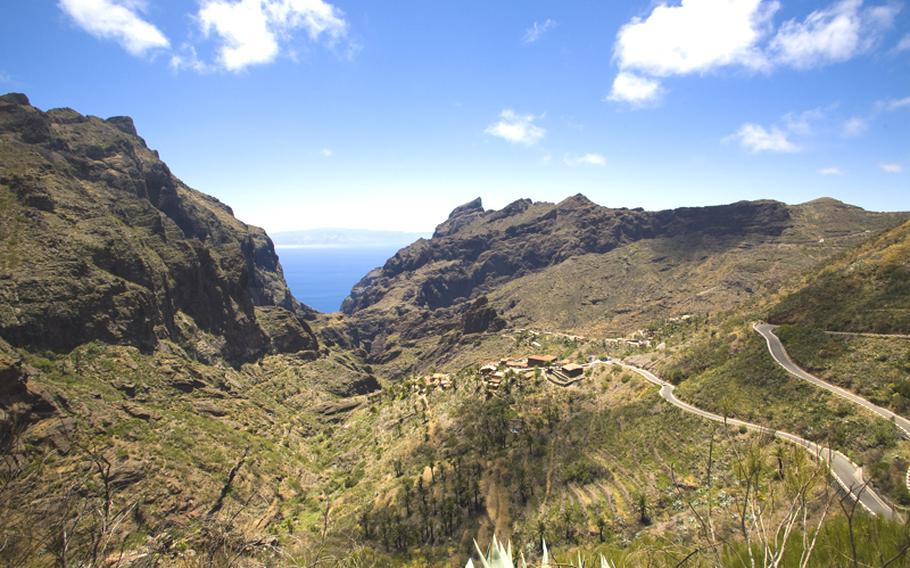 The picturesque hamlet of Masca perches high above the gorge that makes up part of the Masca trail. Hikers can use the village at the start or end of the trail and can arrange for transportation to drop them off or pick them up. (Tenerife Tourism Corporation) 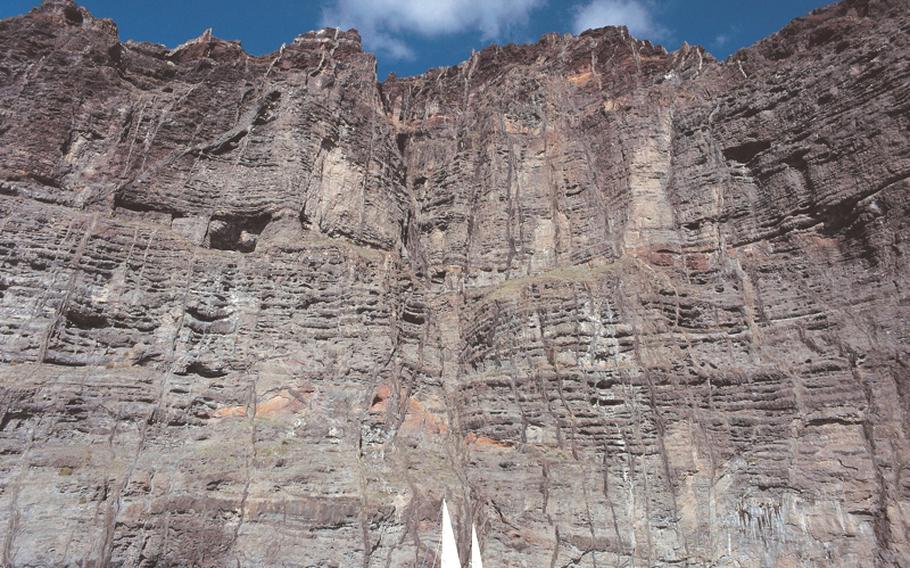 The cliffs of Los Gigantes close to Masca beach is one end of the gorge walk; the other is the village of Masca high in the mountains. (Courtesy of Tenerife Tourism Corporation)

Famous throughout Europe as a place for sun, sea and sangria, the Spanish island of Tenerife has a more challenging side that&rsquo;s often overlooked by the tourists who flock to its westerly resorts for beach R&R.

Tenerife, about 180 miles off the west coast of Africa, is the largest of the seven Canary Islands and has attracted visitors since the 18th century. Early tourists came on medical advice to take in the balmy fresh air or to explore the island&rsquo;s diverse landscapes, flora and fauna.

For a knowing few, this sense of exploration and getting beyond a beach lounger and paperback continues. Tenerife, the third-largest volcanic island in the world, offers some of the most breathtaking and satisfying hikes to be had in Europe.

At the top of the list of active destinations is, without doubt, the Teide National Park crowned by Spain&rsquo;s highest peak, the nearly 12,300-foot dormant volcano Mount Teide.

The surrounding lunar-like terrain entices millions of tourists from the beaches each year, brought up by bus and rental car to wonder at the stunningly other-worldly volcanic landscape of the former crater surrounding the peak. It&rsquo;s a beautiful, barren wilderness of jagged rock formations in yellow, red and green surrounding vast black fingers of petrified lava spread across expanses of blinding pumice desert.

Recognizing its potential as an unusual celluloid backdrop, Hollywood has been joining the hikers. This year&rsquo;s Greek gods spectacular &ldquo;Clash of the Titans&rdquo; credits the weird and wonderfully astral scenery of Teide National Park as one of its key locations.

To get up Mount Teide, most tourists take a cable-car ride to an elevation of about 11,400 feet, close to the top and the limit of public access. Very few don stout shoes and rucksacks and take to the slopes on foot. However, for those willing to get a permit in the island&rsquo;s capital of Santa Cruz, an authorized hiking ascent can be made with permission to go beyond the limit for cable-car trippers and to reach the crater and peak.

That hike is not for the faint-hearted. It is recommended only for experienced walkers with a better-than-good level of fitness and proper equipment. But the rewards for the six-hour assault are great. Among the rarefied air tinged with the aroma of the venting sulphur giant are impressive views across Tenerife&rsquo;s mountainous backbone, its pretty villages and its surrounding seascapes to the neighboring Atlantic islands of La Gomera, Gran Canaria, Las Palmas and El Hierro.

Just before daybreak, following a night&rsquo;s rest in the Altavista refuge close to the top, is a particularly stunning time to make the final climb. Unaffected by pollution, the slowly ebbing evening sky is alight with cascading shooting stars followed by the spectacular fire- red sunrise. A spectacle truly worthy of Zeus.

Though still demanding, a less vertigo-inducing hike is through the Masca Gorge on the western side of the island. The four-hour walk on the approximately three-mile, boulder-strewn trail winds past lava tubes and huge sheer rock walls featuring bizarre geological formations.

The tiny hamlet of Masca perches at the trail&rsquo;s summit. It offers some fine views, a small collection of bars and a shop selling local knickknacks for those just completing the journey or about to begin.

At the far northeastern end of the island, where very few venture to tread, is the Anaga Mountain range. Unlike the often-barren desert landscapes of the south, hiking here presents a variety of panoramas. They range from the lush tranquility of rare and ancient Laurissilva forests &mdash; growths of laurel trees that once covered large parts of the island &mdash; to the gentle rural communities where people still scratch a living off impossibly steep agricultural terraces, and the colossal blackened cliffs pounded by crashing Atlantic waves.

The Anagas come with an assortment of circular and one-way trails and figuring out bus routes and timetables is useful for drop-offs and pick-ups for those not renting a car.

Easy ambling along ancient tracks used by early inhabitants, the Guanches, or more-challenging hikes are available, and both offer a look at Tenerifian culture long before the onset of tourism. One of the most rewarding is the 3&frac12;-hour, seven-mile circular route from Cruz del Carmen to Chinamada. It comes with some spectacular views and even a glimpse into Tenerife&rsquo;s rare, but still surviving troglodyte community living in the mountainsides.

There are regular flights from most European airports to Tenerife South Airport. Some with discount flights include: Monarch (www.monarch.co.uk); Condor (www.condor.com); Air Berlin (www.airberlin.com); and TUIfly (www.tuifly.com).

The weather is relatively constant throughout the year with average daytime temperatures between 48 and 78 degrees Fahrenheit. Generally July and August are the hottest months, January and February the coolest when snow starts to appear on Mount Teide. The north of Tenerife tends to be a little cooler with more chance of cloud and showers. At high altitudes, such as on Mount Teide, the barren conditions alternate between searing heat in summer and icy, sub-zero temperatures in winter.

The Canary Islands&rsquo; bus line, TITSA, connects small towns and hiking trails. Its website is www.titsa.com. A variety of international and local companies rent autos at several sites around the island, including the airport. Find a list of a dozen options, along with other useful information on the island, at www.webtenerife.com.

There are many hotels clustered in the resorts of Los Cristianos and Playa de la Las Americas, though there an increasing number of smaller hotels opening up in lesser-known rural towns.

For five-star opulence try El Mirador, www.elmiradorgranhotel.com. For something more low-key and away from the crowds try the San Antonio apartments in the pretty northern town of Icod, www.apartamentos-san-antonio.eu.

For more on accommodations, go to www.mytenerifeinfo.com.

A permit is needed to reach the summit by foot and can be applied for in person, or by mail, fax or e-mail at the administration office of the Teide National Park. The office is open 9 a.m. to 2 p.m. Monday to Friday, and originals and photocopies of ID cards or passports must be presented. Its address is: Office of the National Park, C/ Emilio Calzadilla, No. 5, Floor 4, Santa Cruz de Tenerife; (+34) 922-0290-129; e-mail teide@oapn.es.

The cable-car ride up the mountain to the boundary of the area open to the public without a permit costs 25 euros.

A number of local tour operators offer day excursions, picking you up at your hotel, dropping you off at one end and then collecting you via boat at the other after the hike. For independent travelers, the nearby town of Los Gigantes offers boats for charter collection or drop-off for around 15 euros. They will either take you to Masca beach for the ascent or collect you at the end of the walk. A descent from the hamlet is the easiest option on the body, and the end reward is a swim at an isolated black sand beach cove prior to being picked up by the pre-arranged boat.