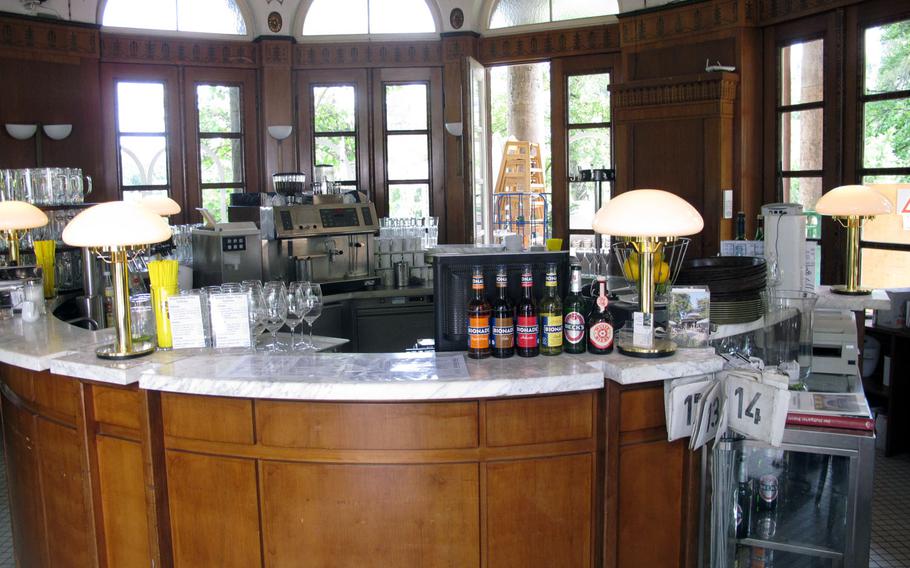 Inside, the Teehaus has about a dozen tables and plenty more seating outdoors. (John Vandiver/Stars and Stripes)

Inside, the Teehaus has about a dozen tables and plenty more seating outdoors. (John Vandiver/Stars and Stripes) 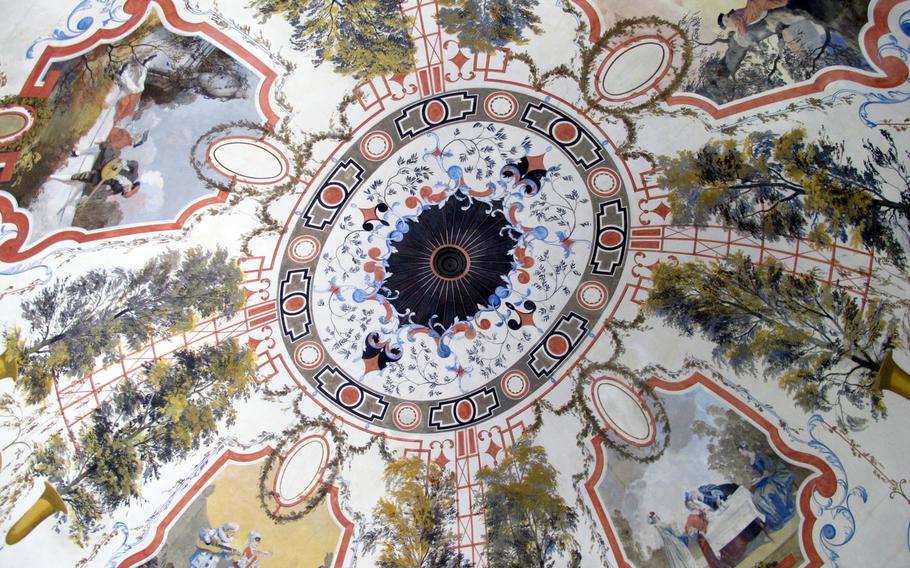 The dome's fresco adds to the charm at Stuttgart's Teahaus, which is a century old. (John Vandiver/Stars and Stripes) 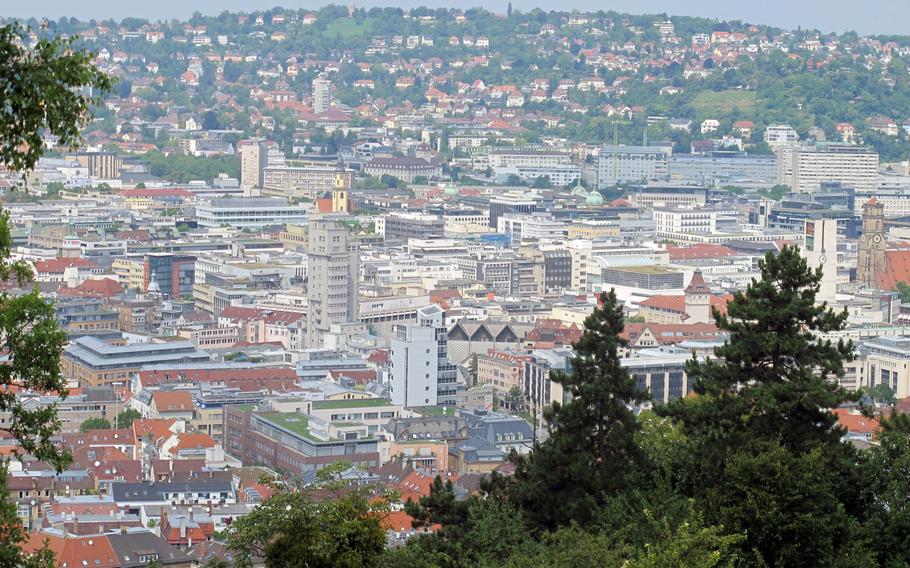 Those who go to the Teehaus for food and refreshment are treated with a sweeping view of downtown Stuttgart, Germany. (John Vandiver/Stars and Stripes) 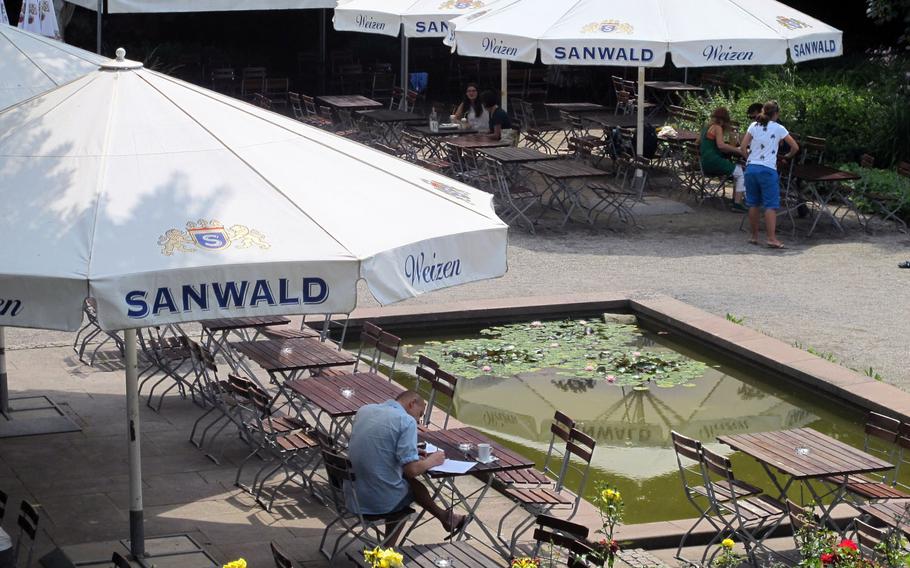 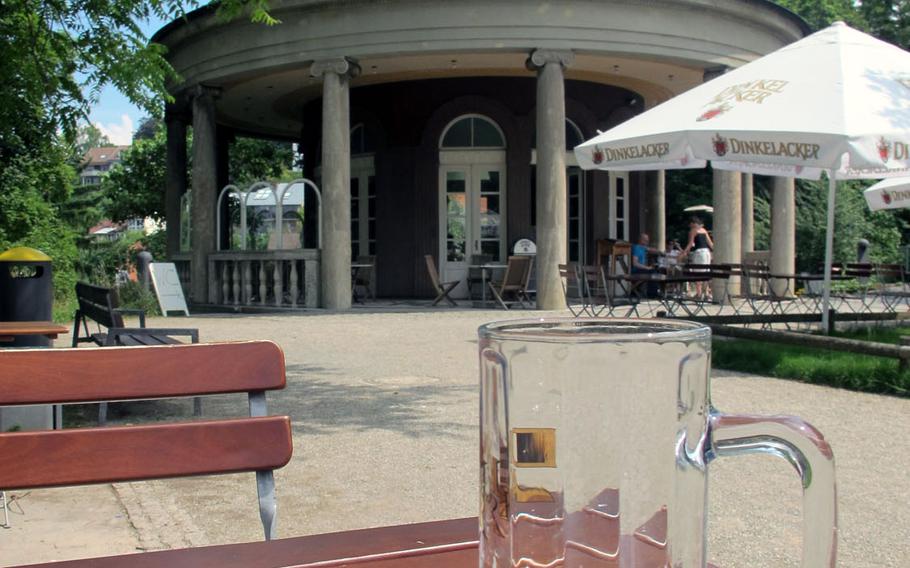 The Teehaus, a small cafe in the southern part of Stuttgart, Germany, offers drinks and food and a great view of the city. (John Vandiver/Stars and Stripes) 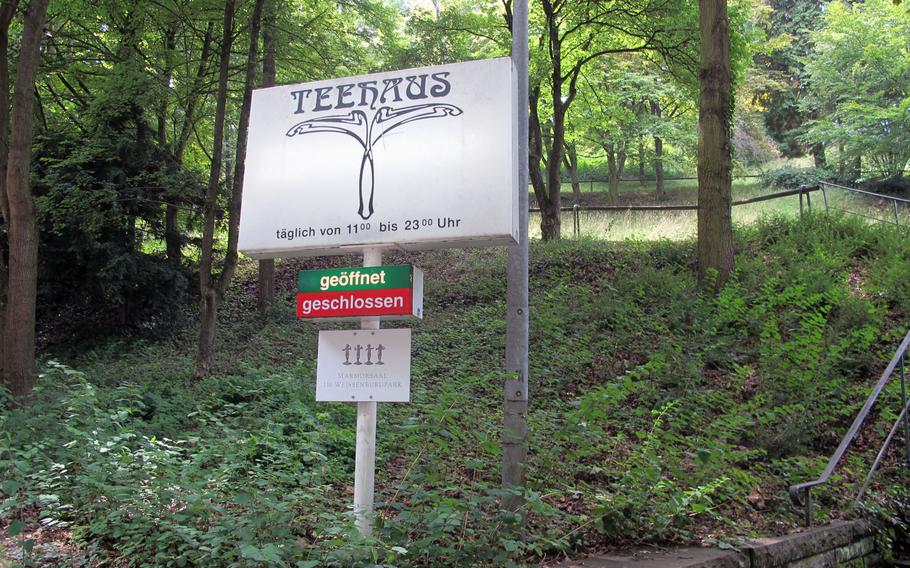 On Bopserwaldstrasse, this sign marks the starting point of the walk to the Teehaus. It's about a five-minute climb up a series of steps. (John Vandiver/Stars and Stripes)

The southern German city of Stuttgart, set in a valley and surrounded by hills and steep vineyards, is famous for its steps.

You encounter them everywhere you go, whether hiking up a flight through the working- class east or through a wine trail on the north side. There are some 400 outdoor stairways scattered around the city, and the reward for scaling one of them often is a panoramic view of the city below.

If you head up the steps along Bopserwaldstrasse in Stuttgart’s southern section and make the modest five-minute climb, you’ll be rewarded with something extra — a breath-catching break at one of the loveliest watering holes in all of Stuttgart.

The Teehaus, a little century-old gazebo, is the perfect place to kick back in the summer.

The cafe, which offers a wide range of drinks and a menu of regional favorites, is basically a tiny rotunda with about a dozen tables inside and more around the perimeter. An old fresco painted on the dome roof adds to the charm. The bartender says the place is 101 years old.

Beer, wine and cocktails and an assortment of nonalcoholic drinks are available. The food is standard beer garden fare — Spätzle (noodles), Maultaschen (filled ravioli-like pasta) and cold salads in the 10-euro range. There is typical beer garden seating outdoors, ensuring plenty of places to plop down.

I generally prefer to order a beer and wander the lush green grounds, eventually settling on a bench overlooking the city.

On weekends when the weather is nice, the Teehaus is packed with visitors. Luckily, the area around the cafe provides plenty of green space to throw down a picnic blanket and relax for the afternoon. Just stroll back to the Teehaus when you need a refill. And if you’re bringing kids, you’re in luck. There’s a playground about 50 yards away that will help keep them occupied.