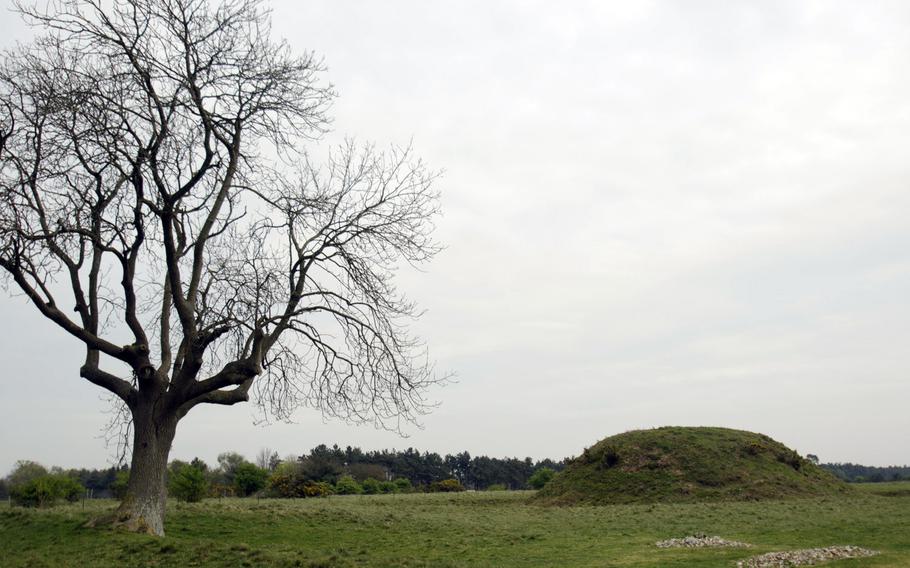 Mounds such as this one mark the Sutton Hoo burial site near Woodbridge, England. Experts have uncovered artifacts at the site as well as ancient remains buried there. Now the area is open to tourists. (Adam L. Mathis/Stars and Stripes)

Mounds such as this one mark the Sutton Hoo burial site near Woodbridge, England. Experts have uncovered artifacts at the site as well as ancient remains buried there. Now the area is open to tourists. (Adam L. Mathis/Stars and Stripes) 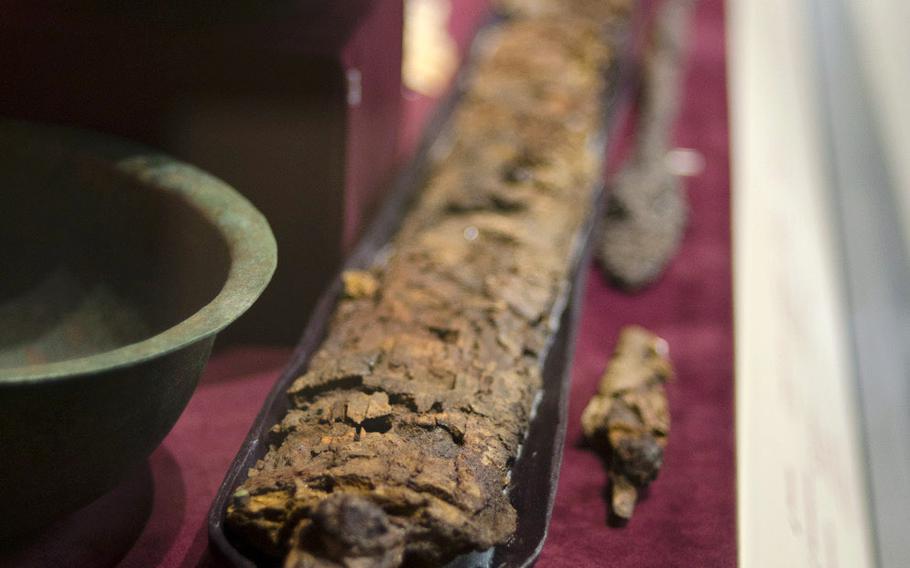 An authentic iron sword lies in a display case at Sutton Hoo near Woodbridge, England. Some of the museum's artifacts are reproductions, with the British Museum in London holding other artifacts from the site. (Adam L. Mathis/Stars and Stripes) 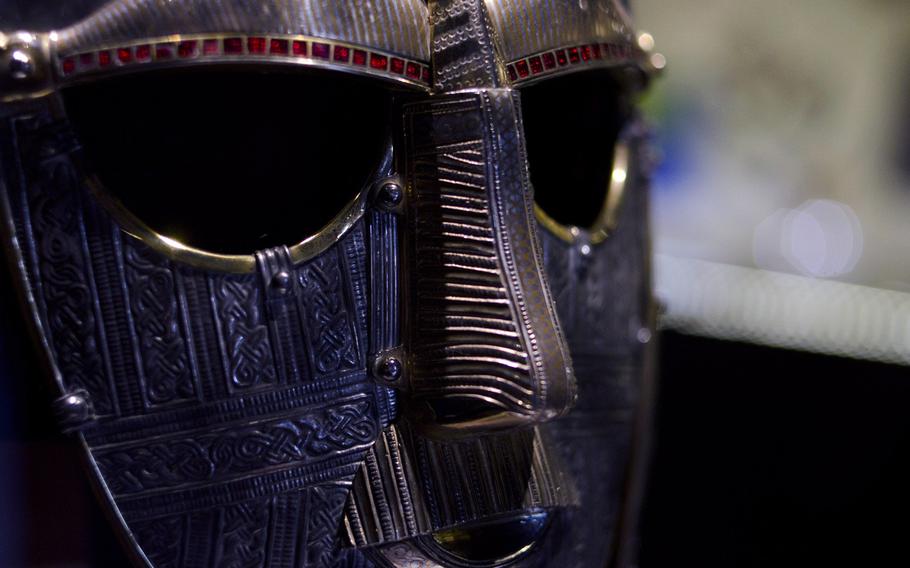 A reproduction of the Sutton Hoo helmet on display at the park near Woodbridge, England. The original is held by the British Museum in London. (Adam L. Mathis/Stars and Stripes) 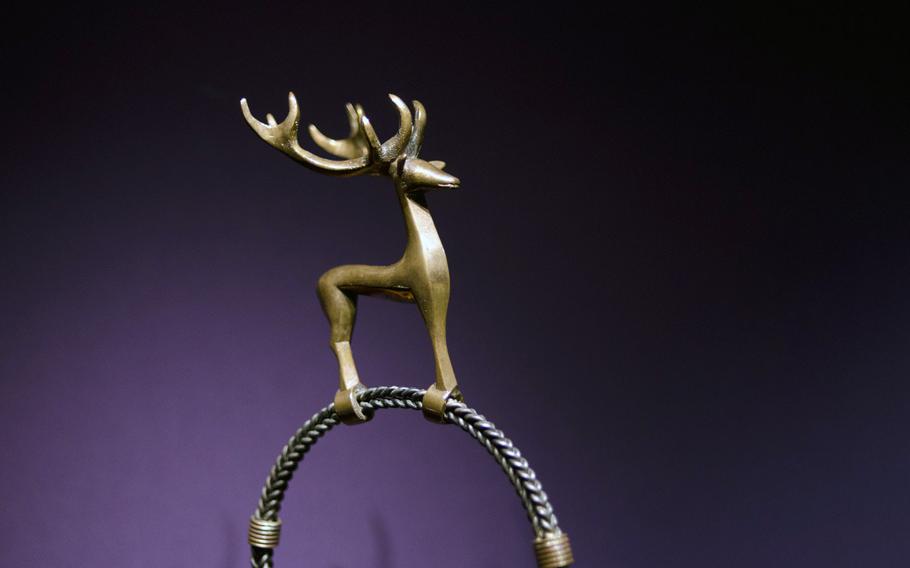 This deer is the top of what is believed to be a scepter found at Sutton Hoo near Woodbridge, England. The museum now displays a reproduction of the scepter. The museum describes the scepter as unusual, being made out of a stone good for sharpening swords, but shaped in a way that would have made it impractical for the task. (Adam L. Mathis/Stars and Stripes) 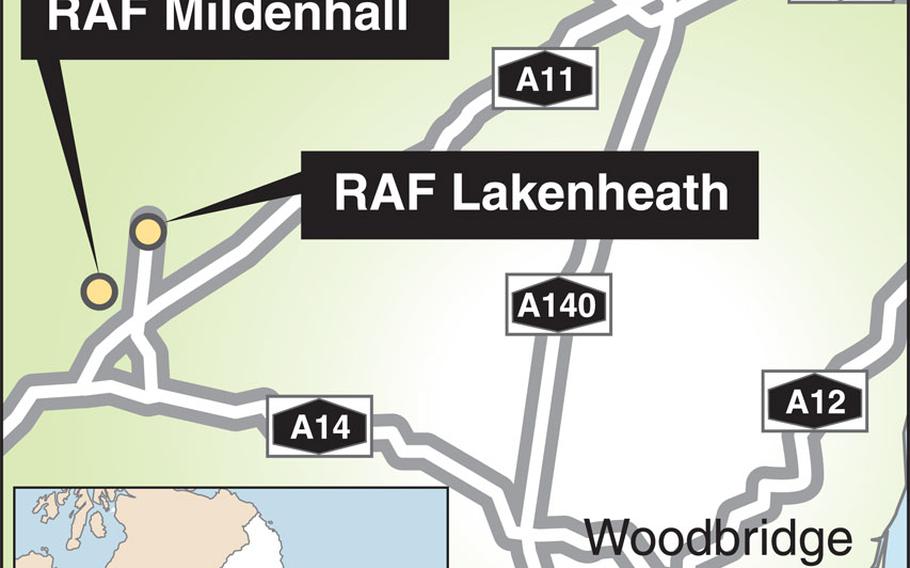 There is little at Sutton Hoo to mark the spot where a horde of treasure was discovered.

The spot lies just outside a grove and next to a pig farm.

Small mounds of earth, some little more than folds in the land, mark the spot where almost 1,500 years ago a king might have been buried. Visitors are kept away from the mounds but are directed to a viewing area where modern signs give expert analysis of what happened here.

Sutton Hoo made the news in the 1930s, when a boat was discovered in the soil along with gold and a rare helmet. It has been speculated that this might be the burial site of an Anglo-Saxon king, Raedwald. Regardless, this ancient burial sheds light on a group of people who defined the future of England.

Anglo-Saxon is the modern name given to tribes from Europe that settled in England after the Roman Empire began to dissolve in the early 400s. These tribes established the dominant culture in the land and eventually gave their name to England (or the land of the Angles).

The site also has a more grim history. After the burial of the rich treasures, some people were violently killed at Sutton Hoo. Bodies were found with broken necks and beheaded. Visitors can see some of the people who were buried at Sutton Hoo. Though the ground dissolved the human remains, archaeologists have used the cavities left in the ground by their bodies to re-create people left who were buried there, and one is on display in the museum.

Sadly, that body is one of the few pieces of history Sutton Hoo retains. The treasures were personal property and donated to the British Museum in London, not the National Trust, which currently runs the site. The trust fills the gaps with replicas.

The replicas, along with a few authentic artifacts, are displayed in a museum at the site. The museum describes the story of how the site was uncovered and has a re-creation of what the inside of a mound could have looked like when it was first made.

While Sutton Hoo would be far better with the original artifacts on site, it does offer guided tours and miles of walking trails. The nearby, moderately sized town of Woodbridge lies across Deben River from Sutton Hoo. Here one can find plenty of restaurants, and the town is near a riverside walking trail.

Times Sutton Hoo is open year round, but hours vary by month; check “Opening Times” on the website for monthly calendars.

Food The site has a cafe with drinks and food.