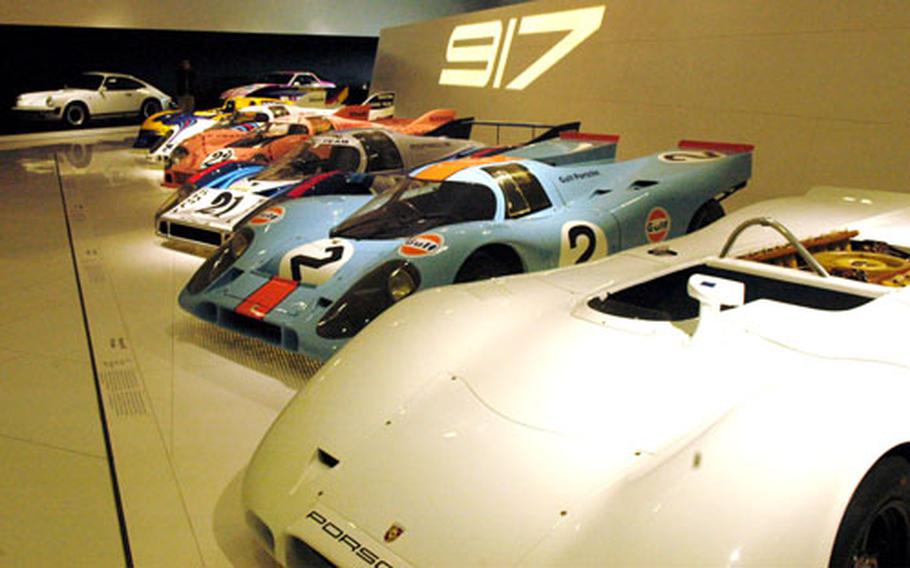 A series of 917 race cars is one of the big attractions at the museum. The 917 dominated racing in the early 1970s but was banned after a rules change. With more than 1,000 horsepower, it was "unvanquished on the racing course." (John Vandiver / S&S)

A series of 917 race cars is one of the big attractions at the museum. The 917 dominated racing in the early 1970s but was banned after a rules change. With more than 1,000 horsepower, it was "unvanquished on the racing course." (John Vandiver / S&S) 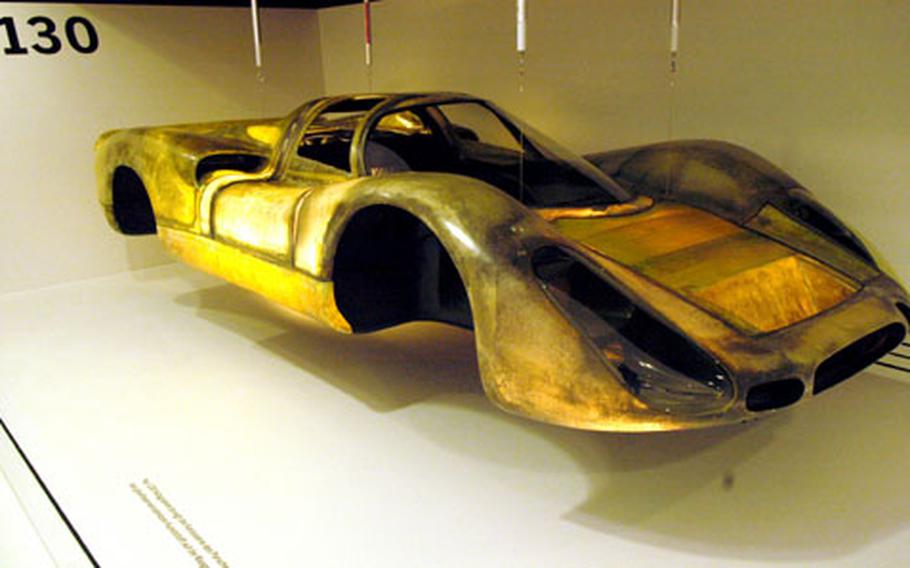 Built for speed, this lightweight fiberglass frame for the Porsche 908 weighs just 130 kilograms — less than 300 pounds. The Porsche museum features engines and other pieces of technology that illustrate how the cars are built for speed. (John Vandiver / S&S) 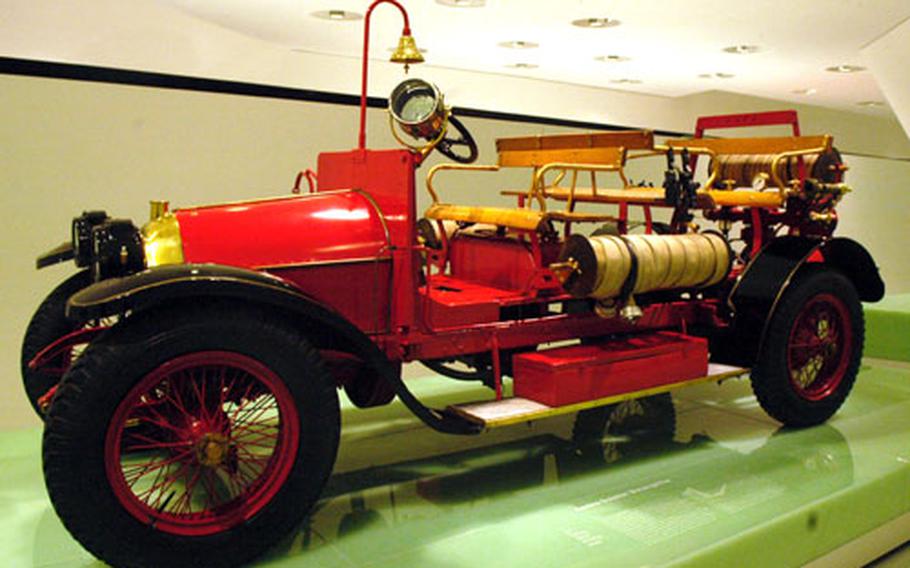 Somewhat out of place amid all the high-performance sport cars is one of Ferdinand Porsche&#39;s earliest automotive projects: a fire truck. Built in 1912, the truck is among the roughly 80 vehicles on display at the museum. (John Vandiver / S&S) 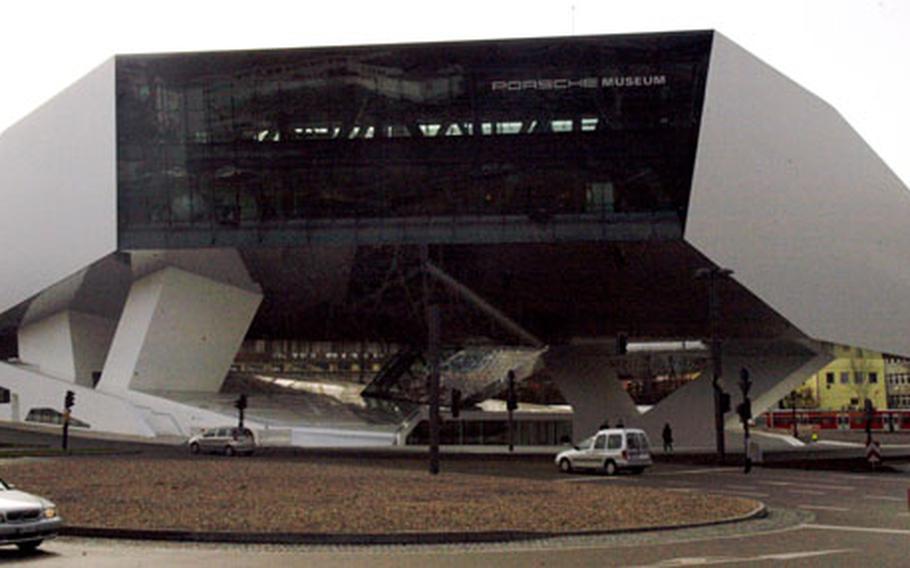 It was probably as close as I&rsquo;ll ever get to experiencing the raw power of a Porsche. Standing in a tubelike contraption designed to simulate the feel of a world-class sports car, my feet vibrated to the surround sound of the revving Porsche 911.

The sound effect device, however, was just about the only gimmicky thing at the new Porsche Museum in Stuttgart, Germany, where the main attraction is the four-wheel machine itself.

The museum, which opened in January after years of planning and construction, is sleek and stylish just like the car it honors. It replaces a smaller museum that opened in 1976 on a side road near the Porsche factory.

The history of Porsche sports cars started in 1948, but the museum goes farther back to some of the early work of the company&rsquo;s founder, Ferdinand Porsche.

Before the design of his first namesake vehicle &mdash; the Type 356 "No. 1" &mdash; Porsche had been involved in design work for other companies. However, he eventually established his own engineering office in Stuttgart in 1931, which became Porsche&rsquo;s world headquarters.

"In the beginning I looked around but couldn&rsquo;t find the car I dreamt of, so I decided to build it myself," reads one Porsche quote.

The museum isn&rsquo;t all sports cars, though. It also features some of Ferdinand Porsche&rsquo;s work for other companies, including a pre-Porsche fire engine built in 1912. Apparently, the master of speed also had a thing for fire trucks.

About 80 cars sit inside the museum, which is divided into small exhibits spotlighting some of Porsche&rsquo;s most iconic models, such as the 911 series and the famous 917 racers.

As visitors move through the exhibits, the development of the cars unfolds chronologically all the way up to contemporary models.

But you don&rsquo;t have to be a car expert or even an enthusiast to enjoy a walk through the museum. The building itself is a thing of beauty, as are the rows of cars. Even an automotive nincompoop like me found the experience pleasing.

But if you&rsquo;re a more serious-minded car person looking to learn a little more about Porsche engineering, then there&rsquo;s plenty to dig into. There are displays of engines from throughout the years and detailed audio descriptions of Porsche&rsquo;s long history of mechanical accomplishment.

Indeed, the museum is a place you can be in and out of in one hour, content with just a superficial look around, or one where you can bury yourself in the technical minutiae for several hours.

On the way out, you also should drop by the museum souvenir shop, where little matchbox-size replicas of famous Porsche models are for sale. But if you&rsquo;re really feeling inspired, just walk across the street to the Porsche dealership, where you can drive off in the real thing.

Know and go ...Directions: The Porsche Museum is at Porscheplatz 1 in Zuffenhausen, just north of downtown Stuttgart. Take B-10 to the Zuffenhausen factory (industrial) exit &mdash; be sure not to take the Zuffenhausen city exit. After exiting, follow the signs to the museum, which is about one mile from the bottom of the ramp. Underground parking is free for up to six hours with a validated admission ticket.

Times: Open 9 a.m. to 6 p.m. Tuesday through Sunday; closed Mondays. Tickets can be purchased until 5 p.m.

Costs: Tickets cost 8 euros for adults and 4 euros for those qualifying for reduced rates; children up to age 14 get in free when accompanied by an adult. Audioguides in several languages are available at no additional charge.

Food: Tickets cost 8 euros for adults and 4 euros for those qualifying for reduced rates; children up to age 14 get in free when accompanied by an adult. Audioguides in several languages are available at no additional charge.

Information: The museum offers special theme-related tours at regular intervals as well as tours for groups of up to 20 people. Contact the museum by phone at 0711-911-20911, by fax at 0711-911-20356, or by e-mail at info.museum@porsche.de. Its Web site is www.porsche.com/international/aboutporsche/porschemuseum/.