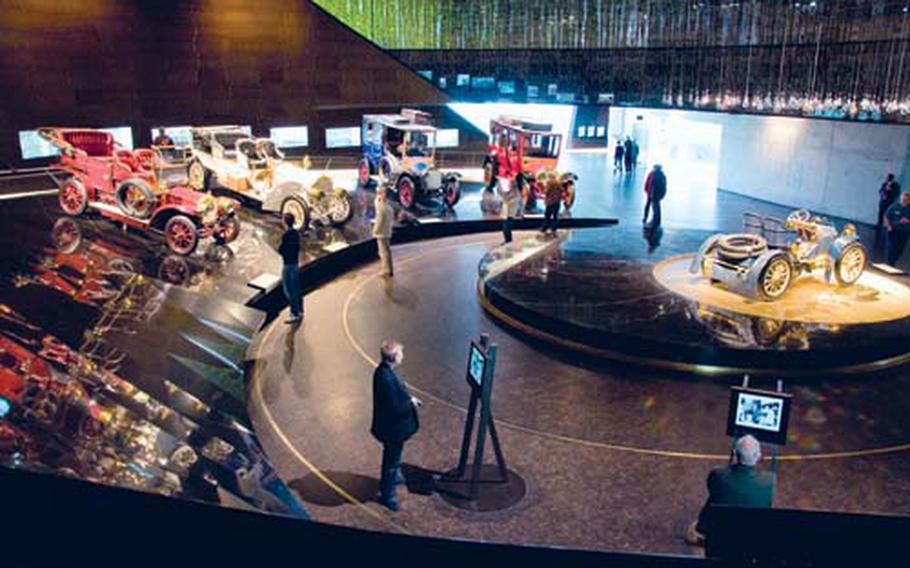 The “Birth of a Brand” exhibit in the Mercedes-Benz Museum features automobiles from the beginning of the company’s efforts in modern automobiles. The exhibit showcases what the museum calls the first modern automobile, the 35 HP Mercedes. (Warren Peace / S&S)

The “Birth of a Brand” exhibit in the Mercedes-Benz Museum features automobiles from the beginning of the company’s efforts in modern automobiles. The exhibit showcases what the museum calls the first modern automobile, the 35 HP Mercedes. (Warren Peace / S&S) 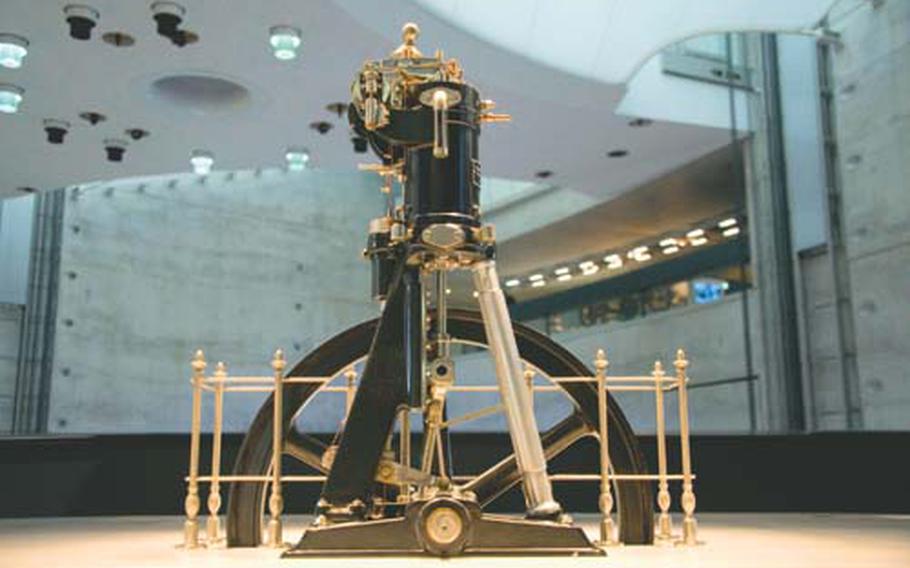 Pre-chamber combustion chambers like this on display at the Mercedes-Benz Museum revolutionized diesel engines, allowing them to be small enough to fit into an automobile. (Warren Peace / S&S) Near the end of the museum tour, viewers can see concept cars lining the walls of the final staircase. (Warren Peace / S&S)

Take a trip through the Mercedes-Benz Museum in Stuttgart, Germany, and you will understand why German engineering has become so iconic.

Like the automobiles and aircraft Mercedes-Benz crafted during the past 120 years, the museum is meticulously constructed. The supporting structure has no right angles and stands out from its surroundings.

Its external appearance resembles something Hollywood would build for a science-fiction movie, with polished aluminum panels separated by 1,800 glass panels that encapsulate the 110,000-ton structure. Inside, nine floors showcase Mercedes-Benz&rsquo;s history in 54,133 square feet of display areas.

Beginning on the top floor, a winding path leads from Daimler&rsquo;s "Grandfather Clock" &mdash; the first small internal combustion engine to run on gasoline &mdash; to modern and concept vehicles on the lower level. About halfway down the serpentlike path, a man in a black suit guides car enthusiasts to a rooftop terrace, home of the museum&rsquo;s latest exhibit.

The 2009 Mercedes-Benz SLS AMG, the company&rsquo;s newest gullwing, is displayed with the doors wide open inviting would-be racers to sit behind the wheel of a supercar. It has 571 horsepower coming from a 6.3-liter V-8 engine with a seven-speed, dual-clutch transmission that accelerates its 3,571 pounds to 60 mph in less than 4 seconds easily.

If that doesn&rsquo;t get you dreaming of an empty stretch of Autobahn, maybe the "Birth of a Brand" exhibit is more your speed.

The exhibit showcases what the museum calls the first modern automobile, the 35 HP Mercedes. The 35 HP represents the first time cars took on their own style instead of resembling horse-drawn carriages.

Also visitors learn where the name Mercedes originated. No spoilers here. You&rsquo;ll have to visit the museum for the answer &mdash; no cheating online.

Other exhibits include race cars, celebrity vehicles, aircraft and public service vehicles. The museum is more than just a mechanical showcase. It shows how automobiles have affected nearly every aspect of our lives, from public safety to protecting the pope.

DirectionsThe museum is at Mercedes Strasse 100, on the northeast side of Stuttgart, between Bad Cannstatt and Untert&uuml;rkheim. It is next to the Gottlieb-Daimler Stadion, the city&rsquo;s soccer stadium.

By train, take the S-1 to the stadium stop; the museum is about a five-minute walk.

CostsGeneral admission is 8 euros. There is a 4-euro discount for military members and students 15 and older. Students 14 and younger are free. Tickets sales stop at 5 p.m.

FoodThe museum has a cafe as well as a restaurant serving a wide range of food items, from snacks up to full-course meals.