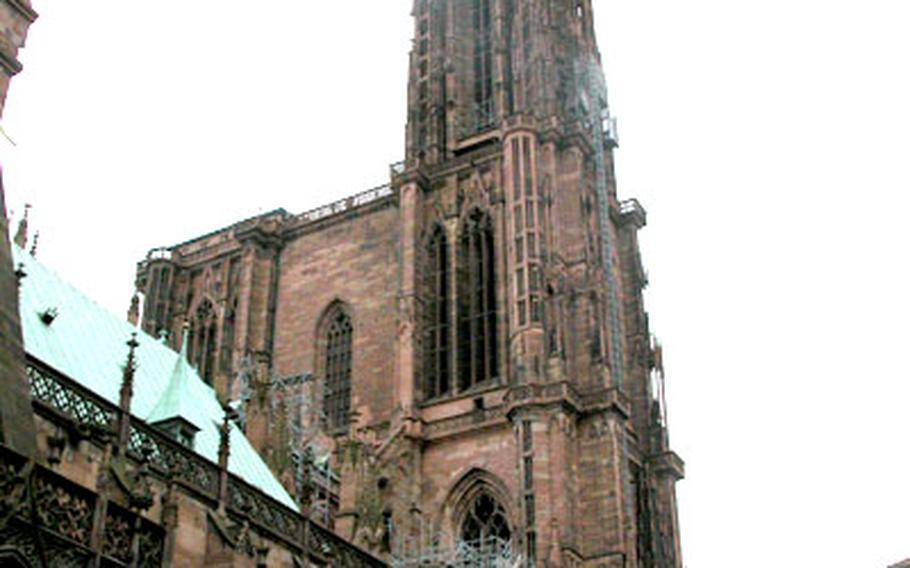 From anywhere in Strasbourg, France, the Strasbourg Cathedral de Notre-Dame dominates the skyline. The massive Gothic cathedral was built between the 11th and 15th centuries. Its tower rises 469 feet, the tallest in Europe. (Geoff Ziezulewicz / S&S)

From anywhere in Strasbourg, France, the Strasbourg Cathedral de Notre-Dame dominates the skyline. The massive Gothic cathedral was built between the 11th and 15th centuries. Its tower rises 469 feet, the tallest in Europe. (Geoff Ziezulewicz / S&S) 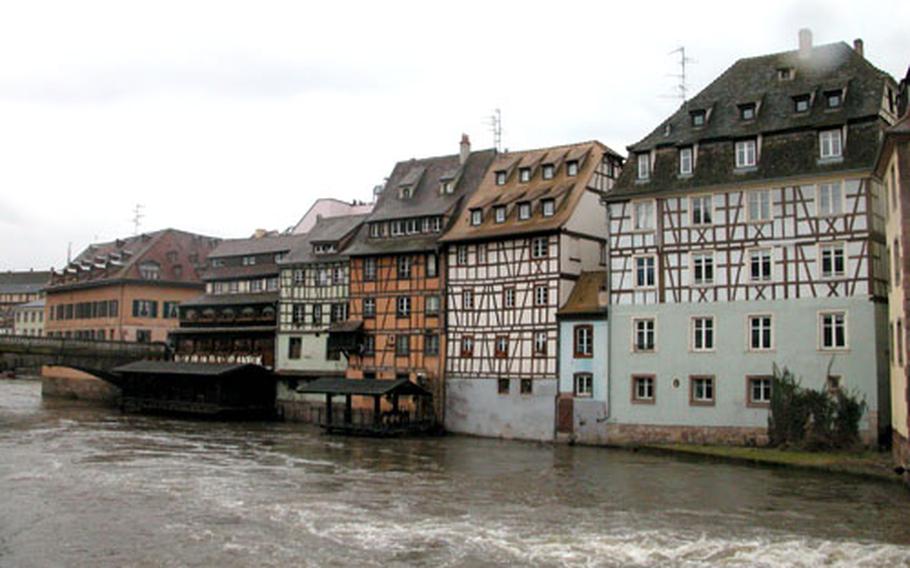 The Petite France quarter of Strasbourg is a throwback to medieval times. (Geoff Ziezulewicz / S&S) 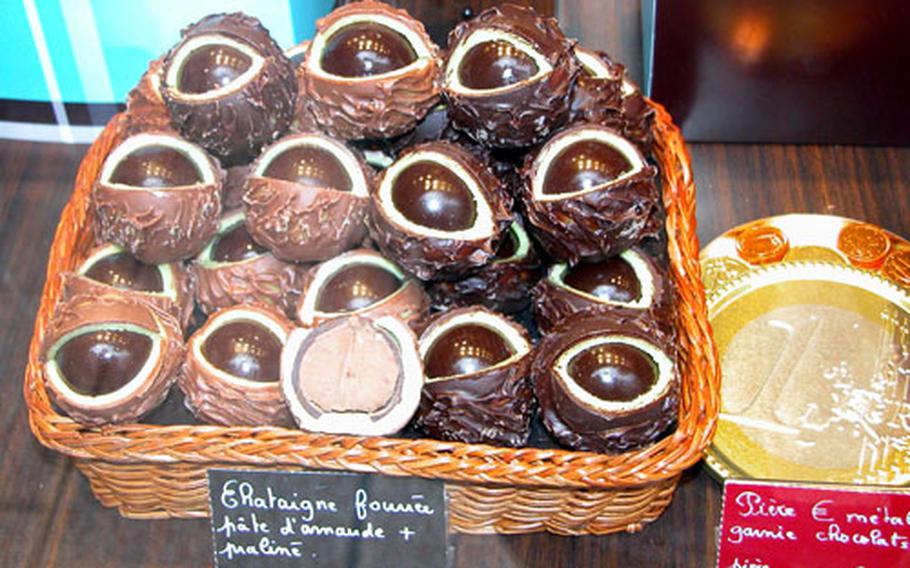 Tasty chocolates and pastries seem to be in the window of every other storefront in Strasbourg. While the city is renowned for its foie gras and wines from the Alsace region, chocolatiers are also a prominent part of the city&#39;s gastronomic identity. (Geoff Ziezulewicz / S&S)

Any American lucky enough to live in Germany can attest to the nice aspects of such an existence. Good beer, quality mass transit and a rich history come to mind.

But in many German cities, that historic sense can be muted by the surroundings, and the aesthetic can be reminiscent of an American city, with modern buildings all around.

While Germany is steeped in centuries of history, much of it got bombed into the ground during World War II, leaving many German metropolises with a modernity that seems to conflict with all that has come before.

But a solution to that historic conundrum lies just across the French border. The city of Strasbourg is both an urban center and a repository of history. It is here that American visitors can find that vision of Old Europe that they carried in their heads from the States. And at just about two hours from some American military communities in Germany, the city provides an ideal Sunday excursion. When it&rsquo;s time to get medieval, go to Strasbourg.

Situated around the banks of the Ill River, Strasbourg incorporates the amenities of a lively modern city with the solemn history that makes Europe such a fascinating place for American tourists. The city houses French military institutions and a university, and is also listed as a World Heritage center by the United Nations Educational, Scientific and Cultural Organization (UNESCO).

The seventh-largest city in France, Strasbourg is also the capital of the Alsace region. It was founded as a Roman camp called Argentoratum in 12 B.C., and the main road was a primary route used by Caesar&rsquo;s forces.

The city really blossomed when the Strasbourg Cathedral de Notre-Dame was built between the 11th and 15th centuries. To this day, the aged church stands as the spiritual and geographical center of the city. Called &ldquo;a prodigy of the gigantic and the delicate&rdquo; by French author Victor Hugo, the cathedral&rsquo;s tower rises 469 feet, the tallest in Europe.

After walking around the ancient interior of the cathedral, check out the Mus&eacute;e de l&rsquo;Oeuvre Notre-Dame, situated at the bottom of the cathedral. An even more tangible sense of Strasbourg&rsquo;s medieval past comes to life through those halls. Paintings by Sebastien Stoskopff, one of the masters of still life, and one of the oldest known stained-glass windows are housed in the museum. A walk through leads to a charming Gothic garden.

After leaving the cathedral, head down the vibrant Rue des Dentelles for some quality French shopping. Clothing stores sit next to amazing chocolatiers, whose windows are full of inconceivably good sweets.

The Rue des Dentelles will take you to the Petite France quarter, which is basically a small set of islands cut by Ill River canals. Here stand medieval homes, right up against the river, in which families have lived for centuries. The area is full of quaint restaurants and souvenir shops. Marking the end of the Petite France quarter are the Ponts Couverts, three mammoth 13th-century towers whose ancient fortifications are named after a series of roofed, wooden footbridges.

The Ill River gives Strasbourg its identity as much as the towering Gothic cathedral does, and a stroll along the walkways that flow next to the water is a perfect way to spend a spring afternoon. Gastronomic delights abound in the city, and many establishments have English-speaking employees who can help navigate the delicious Alsatian foods and the Strasbourg specialties. From little sandwich stands to fine dining, it&rsquo;s easy to eat well in Strasbourg. The city is also the home of foie gras and many French beers.

Tours are available year-round, and include walking, boat and mini-train tours. The main tourism office right next to the cathedral is a good place to start when looking for a way to get around.

Strasbourg is a perfect getaway for a day trip or the weekend. It&rsquo;s distant and different enough to feel that exciting novelty of travel, but close enough to get back in time to grill up a bratwurst.

On the QT ...Directions: From the Heidelberg, Germany, area, take Autobahn 5 in the direction of Autobahnkreuz Walldorf. Take Junction 40 in the direction of Stuttgart and continue on the A5. Take Exit 54 in the direction of Appenweier and get on the U30. Soon, there will be signs for the B28 and Strasbourg, France. Get on the B28 and enter France. Hop on the N4, which leads into Strasbourg. Look for the Strasbourg Centre signs. Parking is easy to find on the outer edges of the Ill River. From there, it&rsquo;s a five- or 10-minute walk to all the sites. The dominant cathedral tower is a good point to head to first.

Times: Boat tours of the city run year-round, when the Ill River isn&rsquo;t too swollen, and cost about 7 euros for adults and about 4 euros for children. The main tourism office near the cathedral is open every day from 9 a.m. to 7 p.m. Foot and train tours also take place daily.

Costs: While offering many attractions, Strasbourg is not an expensive city. Most tours run between 5 and 7 euros for an adult. The tourism office sells a small guide, &ldquo;Strolling in Strasbourg.&rdquo; Most museums cost about 5 euros, with many free on Sundays.

Food: Restaurants abound and offer cheap and expensive fare. Strasbourg is the home of foie gras, and also offers many homemade beers and wines from the Alsace region. Delicate and rich apple and plum tarts are also the pride of the city. The staples of Strasbourg and Alsatian cuisine are easy to find and pepper nearly every corner of the city center.

Information: It&rsquo;s best to check out the large tourism office near the Cath&eacute;drale Notre Dame de Strasbourg. After parking on the outer banks of the Ill River, simply walk toward the tallest, most gothic tower you see. The tourism office is not 100 feet from the cathedral. For more information, log on to www.strasbourg.info.