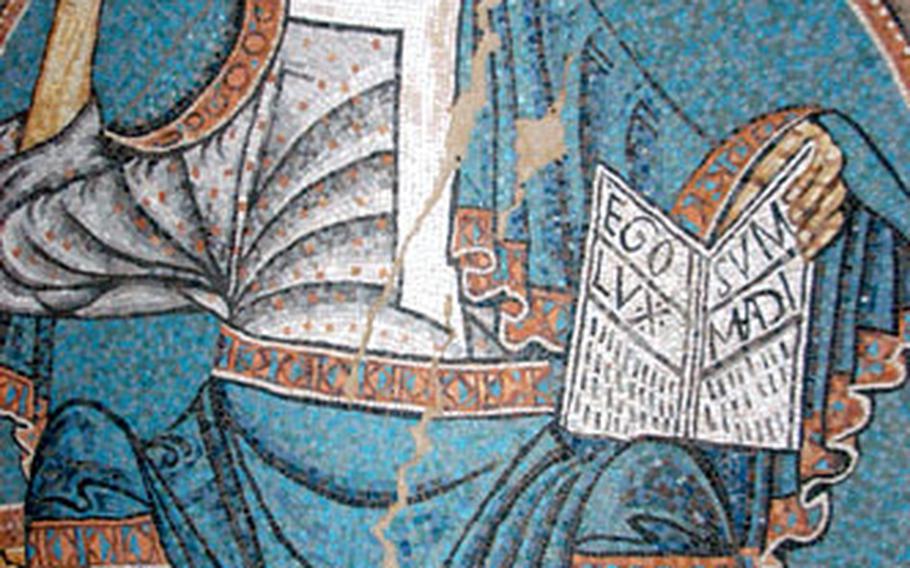 One of hundreds of student-produced mosaics that line the halls of the Scuola Mosaicisti del Friuli in Spilimbergo, Italy. (Kent Harris / S&S)

One of hundreds of student-produced mosaics that line the halls of the Scuola Mosaicisti del Friuli in Spilimbergo, Italy. (Kent Harris / S&S) 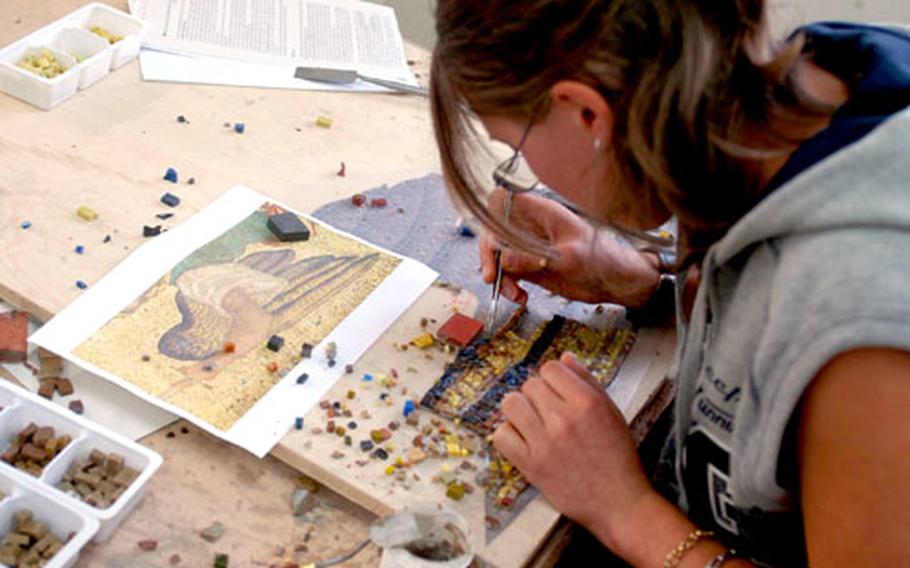 Elena Bonazzoli, a student at the Scuola Mosaicisti del Friuli in Spilimbergo, Italy, works on a small piece during a class. Students might spend three years at the school before they earn a degree and begin working in the marketplace. (Kent Harris / S&S) 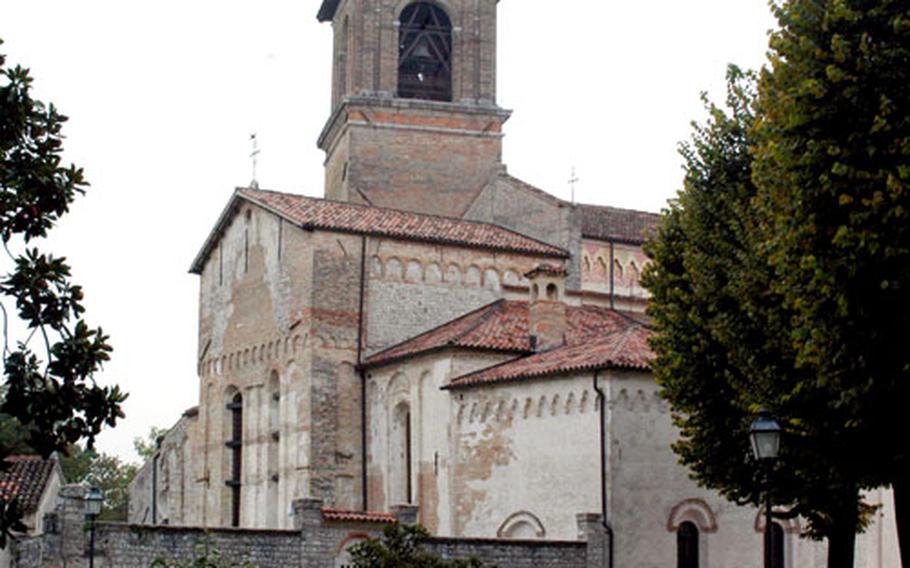 The first stone of the Duomo, or cathedral, of Spilimbergo was laid in 1284. The building boasts an array of frescoes, some of which are time-worn but still beautiful. (Kent Harris / S&S) 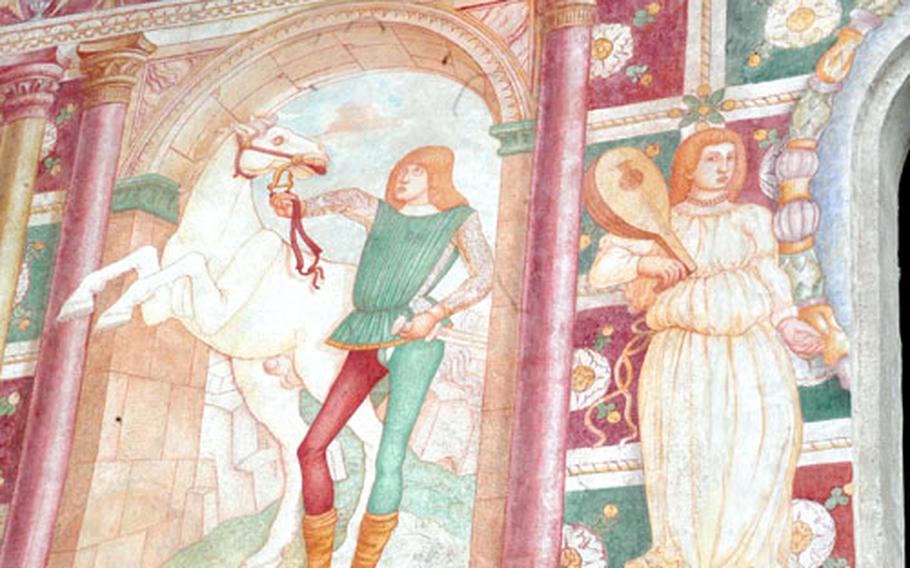 Medieval frescoes can still be seen on an interior wall of the castle in Spilimbergo, Italy, which was gutted by fire in 1511. (Kent Harris / S&S)

One of the best places to see really old mosaics is the ancient Roman town of Auquileia along the Italian coast between Venice and Trieste.

But those who want to learn about the craft itself &mdash; or perhaps spend a few years learning the skills &mdash; need to aim a bit more to the north.

Spilimbergo, known by many as the &ldquo;Town of Mosaic,&rdquo; is about a 45-minute drive north of the Adriatic Ocean coast and just a little less northeast of Aviano Air Base.

Though the area was influenced by Rome, many other cultures had greater impacts. In more modern times, the Austrians and Slovenians held sway at various times. That&rsquo;s reflected in the local language, called friulano. Properly spoken, it&rsquo;s stronger than a dialect and is a combination of Latin, German and Slovenian. It&rsquo;s spoken in various parts of Friuli-Venezia Giulia, but is more commonly used in the northeastern section of the region. According to a brochure issued by the tourist office, a 1975 survey found that 86 percent of Spilimbergo&rsquo;s residents identified friulano as their native tongue, followed by 12 percent who listed Italian.

The art of mosaics doesn&rsquo;t appear to require a specific language, though.

Scuola Mosaicisti del Friuli (the Mosaic School of Friuli) was established in 1922. It currently has a student population of about 100, according to director Gian Piero Brovedani. Students come from about 20 countries, including the United States and South America.

Students who want to receive the full education can expect to spend three years studying before they&rsquo;re ready to earn their certificates and practice the art full time. Many attend the vocational school after finishing their Italian high school educations.

Students have produced hundreds of mosaics throughout the years, and dozens of them are on display in the hallways. Free tours are possible, but those who want one in English should call ahead for a reservation. All large groups need to give prior notification. Brovedani said about 25,000 people visit annually.

If mosaics aren&rsquo;t your thing, the city has other sights to offer, including another big Italian art form: frescoes.

The city&rsquo;s main church, the Cathedral of St. Mary the Major, boasts an array of wall paintings for those with good eyesight and better imagination. The first stone of the church was laid in 1284, and the years haven&rsquo;t been very kind to most of the frescoes in the interior. Still, a group of events taken from the Old and New Testaments can be seen surrounding the altar.

More frescoes are in evidence on an inner wall of the nearby castle. Originally built in 1120, a massive fire destroyed much of the structure in 1511.

Several families now call the castle home, as do the city tourist office and a restaurant.

There are portions of the medieval wall left, as well as more than two dozen other structures that date back hundreds of years around the old part of the town.

On the QTDIRECTIONS: Spilimbergo is about 20 miles northeast of Aviano Air Base. The most direct route is on a series of small roads through the villages of Sedrano, San Foca, Vivaro, Basaldella and Tauriano. It&rsquo;s probably quicker (and easier) to either go north to Maniago and then take the SS464 east, or go south to Pordenone on the SS13 and turn off at the big traffic circle, following the signs north to Spilimbergo.

TIMES: The Scuola Mosaicisti del Friuli is open 8 a.m. to 4 p.m. Monday through Friday. To book a tour in English, call the school at 0427-2077 or go to the Web site: www.scuolam osaicistifriuli.it/en/home/.

COSTS: There is no charge for a tour of the school or entrance to the cathedral. A guide booklet at the tourist office is well worth the 3-euro cost for anyone interested in exploring the city. A parking garage in the Corte Europa complex (in the northern section of the old town and close to the school) costs 40 euro cents an hour.

FOOD: The guide at the tourist office offers five pages on local dishes. It also suggests about a dozen restaurants. Al mus c&rsquo;al svuale, a pub at via XX Settembre 10, offers fresh pasta dishes. A two-course meal for two with soft drinks costs about 22 euros.