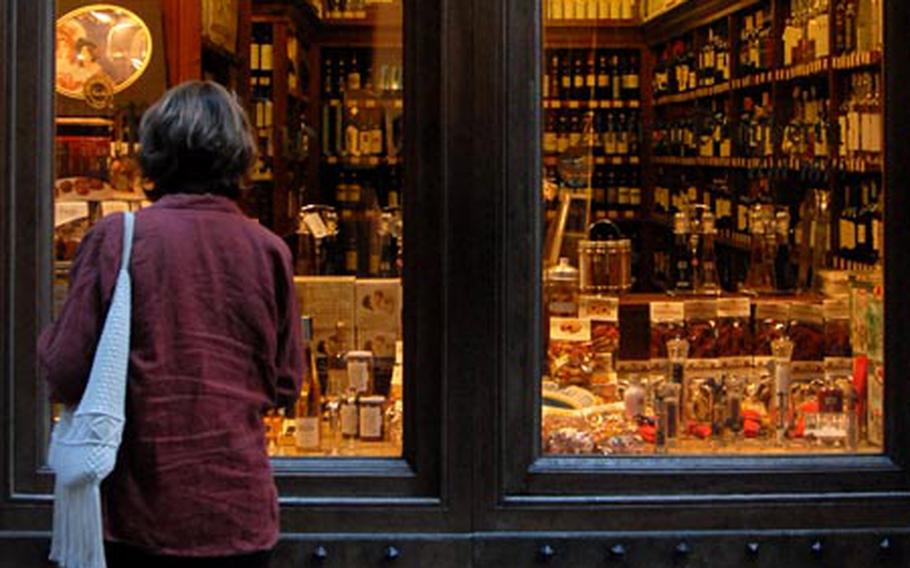 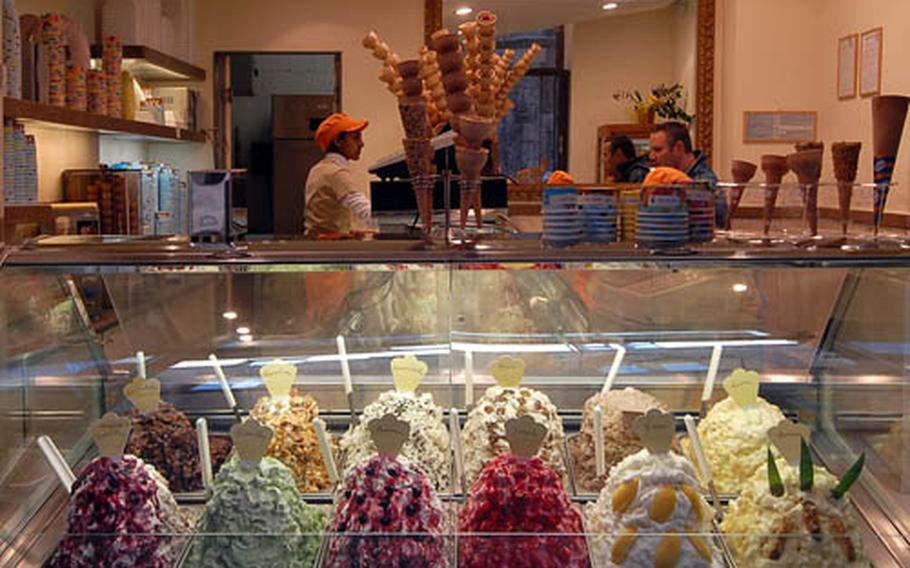 The gelato, or ice cream, is always good, and often great in Tuscany. (Michael Abrams / S&S) 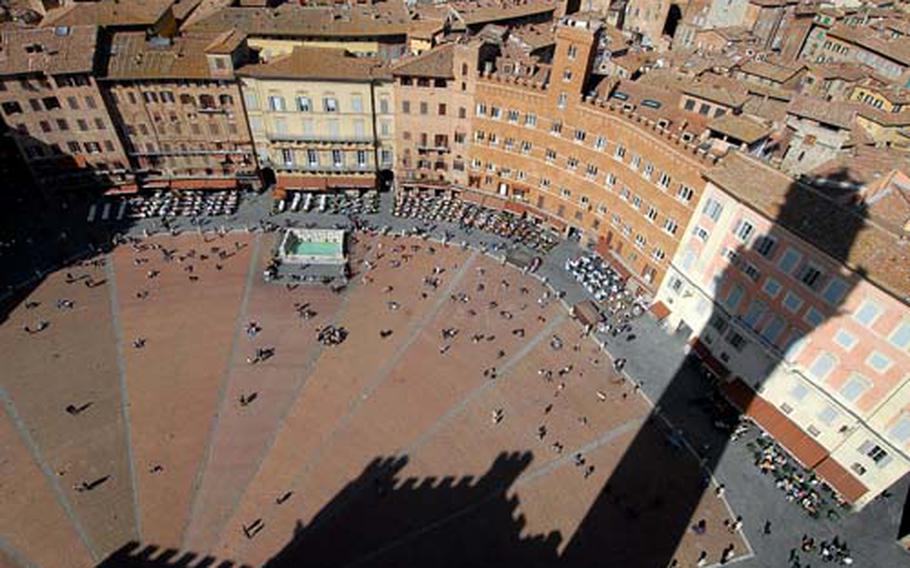 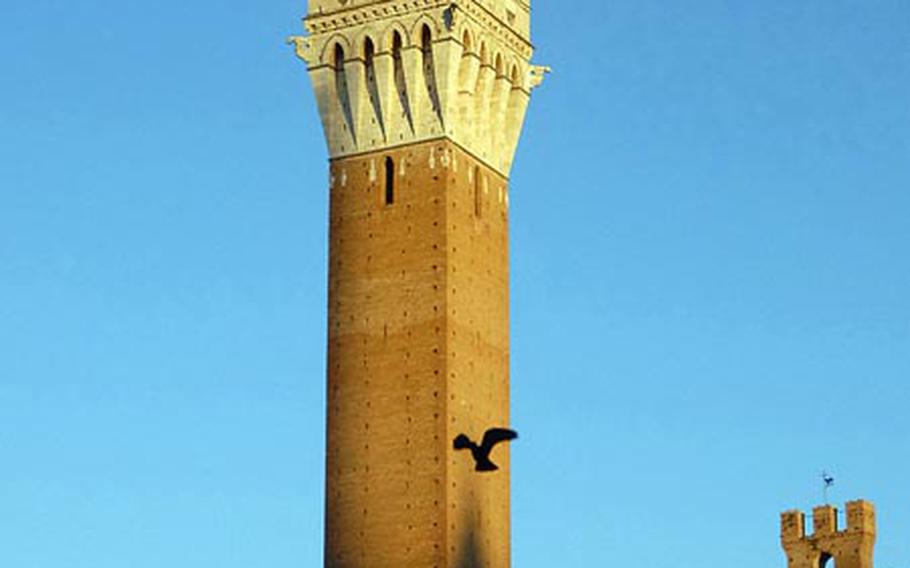 Siena&#39;s Torre del Mangia glows in the setting sun. The 14th century tower is about 330 feet tall and you have to climb 400 steps to get to the top. (Michael Abrams / S&S) 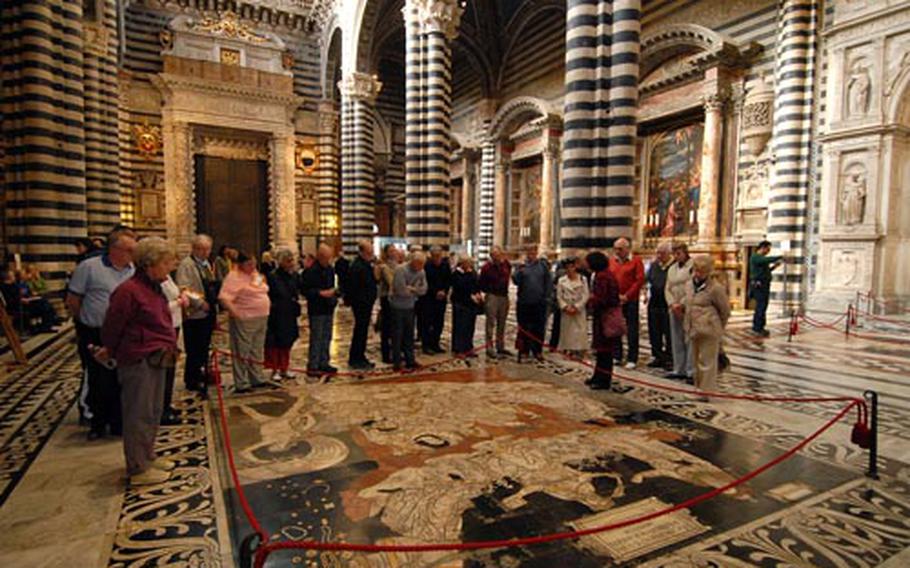 A tour group views one of the 59 marble panels on the floor of the Siena cathedral. Note the ornate decorations and the alternating dark and light bands of marble. (Michael Abrams / S&S)

Siena is one of those places that makes visiting Tuscany so special.

It is hard to pin down exactly what it is that makes it so, but there are plenty of possibilities.

Perhaps it is its layered-cake-like cathedral, or its main square, the Piazza del Campo.

It could be the tall, graceful Torre del Mangia that towers over the square, or the biannual horse race, the Palio, that takes place on it.

Possibly it is the warm color of its buildings that makes it special. After all, it is clay from around here &mdash; terra di Siena &mdash; that gives us the color in our crayon boxes, "Burnt Sienna."

But it is probably a mixture of all these that makes Siena popular.

The construction of the cathedral began in the 12th century, but it was not finished until the 14th. Its bands of dark and light marble make it pretty unusual, and its western fa&ccedil;ade is richly decorated with statues. Inside, the floor of the cathedral is covered with 56 marble panels with figures from mythology and the Old Testament.

The heart of Siena is the fan-shaped Piazza del Campo. At the top of the square is the 650-year-old Fonte Gaia, the fountain of joy, and at its base stands the Palazzo Pubblico with the Torre del Mangia. The 14th-century tower is about 330 feet tall, and if you climb the 400 steps to the top, you get a stunning view of the cathedral, the Tuscan countryside and the city far below.

Twice a year, the famed Palio delle Contrade takes place on the jam-packed piazza. The city&rsquo;s three districts, di Citta, di Camollia and di San Martino, were once divided into 59 sub-districts, or contrade, of which 17 still exist. These are the competing teams in the Palio.

Each contrade has a public fountain bearing its emblem, such as a panther, a snail or an eagle. While strolling through the city, see how many you can find.

Siena has always been a city of art, characterized by the Primitives of the Sienese school of painting. You can see fine examples of Sienese art in the Palazzo Pubblico, the cathedral museum and at the Pinacoteca Nazionale art gallery.

Take a break from sightseeing with lunch at a restaurant serving typical Tuscan food &mdash; the Antica Trattoria Papei on Piazza del Mercato, behind the Palazzo Pubblico, is a good option &mdash; and follow it up with a gelato from one of the shops in town.

Know and go ...&bull; The Palio della Contrade is run twice a year, on July 2 at 7:30 p.m. and on Aug. 16 at 7 p.m. There are trials in the days leading up to the race, and on race day there is much pomp and circumstance. Go to www.ilpalio.org/palioenglish.htm for details.

It is best to check the Web site for times and prices at www.operaduomo.siena.it/english/index.html.

The whole floor of the cathedral can only be seen from the end of August to the end of October.

&bull; The Terre di Siena Web site, with information on the town and surrounding area, is www.terresiena.it.