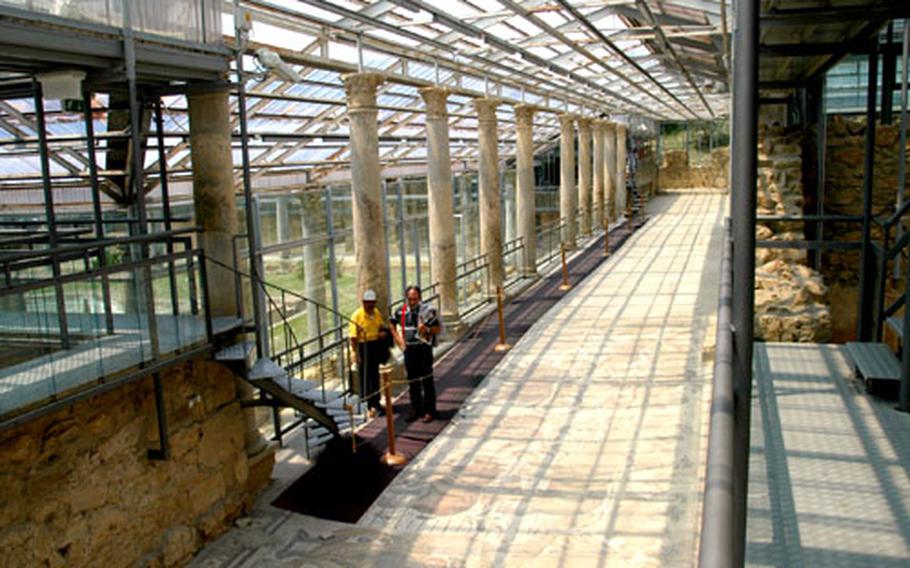 Visitors walk down the large ambulatory at the center of the Villa del Casale, which runs nearly 200 feet. (Jason Chudy / S&S)

Visitors walk down the large ambulatory at the center of the Villa del Casale, which runs nearly 200 feet. (Jason Chudy / S&S) 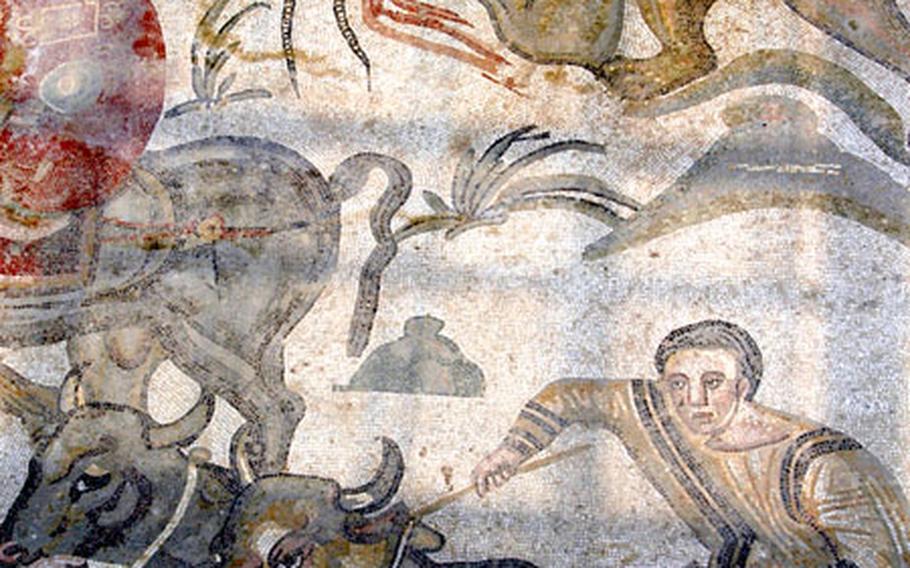 Mosaics in the Villa del Casale are extremely detailed. Areas such as this show animals being used for farming and an African lion killing an antelope. This area came from the large ambulatory at the center of the villa. Mosaics all along the ambulatory depict “the great hunt.” (Jason Chudy / S&S)

All that&rsquo;s missing from the Villa del Casale in the central Sicilian town of Piazza Armerina is Robin Leach reminding visitors to have &ldquo;champagne wishes and caviar dreams.&rdquo;

This nearly 38,000-square-foot villa definitely falls in the &ldquo;Lifestyles of the Rich and Roman&rdquo; category, even by today&rsquo;s standards. It is little more than an hour&rsquo;s drive from Naval Air Station Sigonella.

What makes the villa stand out among many archaeological sites in Italy is the fact that, since it has survived relatively intact, there&rsquo;s a lot less left to the imagination here than at many other archaeological sites. The villa was built somewhere between 200 and 400 A.D., and much of the lower parts, and even some of its frescoes, are still in good shape.

But there is some imagination required when it comes to figuring out who built, and who owned, the villa. Both are a mystery, according to literature available from the UNESCO Web site, which lists the Villa del Casale as one of the three World Heritage Sites on Sicily.

What specific details are known about the villa&rsquo;s history are best read in a guidebook bought from one of the many vendors outside the complex.

Touring the villa without a guidebook is possible, but the book will give a little more information on the bigger picture of the site. Various signs posted inside the villa are specific to certain items or areas, but don&rsquo;t give visitors a good overall idea as to the &ldquo;whos&rdquo; and &ldquo;whys&rdquo; of the villa &mdash; such as the fact that nobody&rsquo;s sure exactly who built the place.

And it&rsquo;s that mystery that makes the villa even more impressive.

When visitors walk between the rooms, there&rsquo;s an actual feeling of walking in and out of someone&rsquo;s house, even though they are usually treading on metal walkways raised above the floor.

The walkways are there to protect mosaics in the floors. Those detailed mosaics &mdash; in the servants&rsquo; quarters, in the guest rooms, seemingly everywhere &mdash; are the villa&rsquo;s greatest feature.

UNESCO says the villa is &ldquo;noteworthy for the richness and quality of the mosaics which decorate almost every room; they are the finest mosaics &hellip; anywhere in the Roman world.&rdquo;

The mosaics depict some of the more grand events in Roman life, such as the capture of wild animals that were brought back to Rome for gladiator fights, to the less eventful, such as fishing and even a couple making love.

There are, of course, plenty of scenes depicting the actions of the gods.

And it seems that for the nearly 200 or so years that the villa was in use, the gods smiled favorably on its owners, providing them with an extremely luxurious life.

It also appears that after the villa was abandoned, the gods continued to smile upon it. A mudslide that covered the villa&rsquo;s intricate works preserved them for future generations to admire.

Directions: From Naval Air Station Sigonella, take the A-19 Autostrada west toward Palermo. Exit at Agira and follow SS 192 west toward Enna. After about six miles, take the SS 117 bis exit and follow that south about 15 miles to Piazza Armerina. In town, follow signs to the Villa Romana. The villa is on the western outskirts of the town.

Cost: Admission is 6 euros. Visitors under age 18 are free as are those older than 65, although sometimes non-Europeans are charged for admission.

Food: There are a few small, overpriced restaurants or bars near the entrance to the villa. More reasonable food is available in town, a few miles away.

Info: Detailed guidebooks can be purchased for less than 10 euros at the many shops and stands near the entrance. The guidebooks are handy, as the displays in the villa don&rsquo;t provide overall details about the villa.