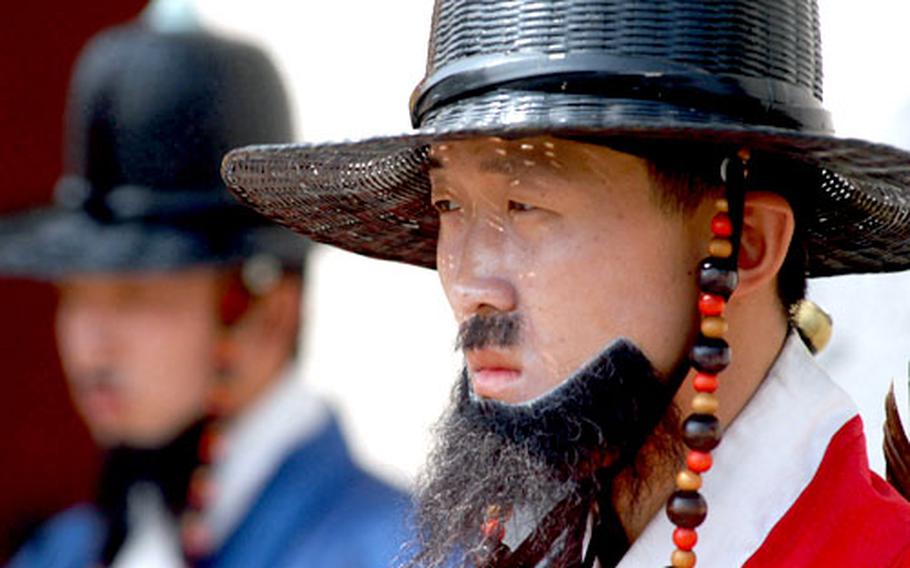 An actor playing a guard from the Chosun Dynasty stands outside Gyeongbok Palace. (Jeremy Kirk / S&S)

An actor playing a guard from the Chosun Dynasty stands outside Gyeongbok Palace. (Jeremy Kirk / S&S) 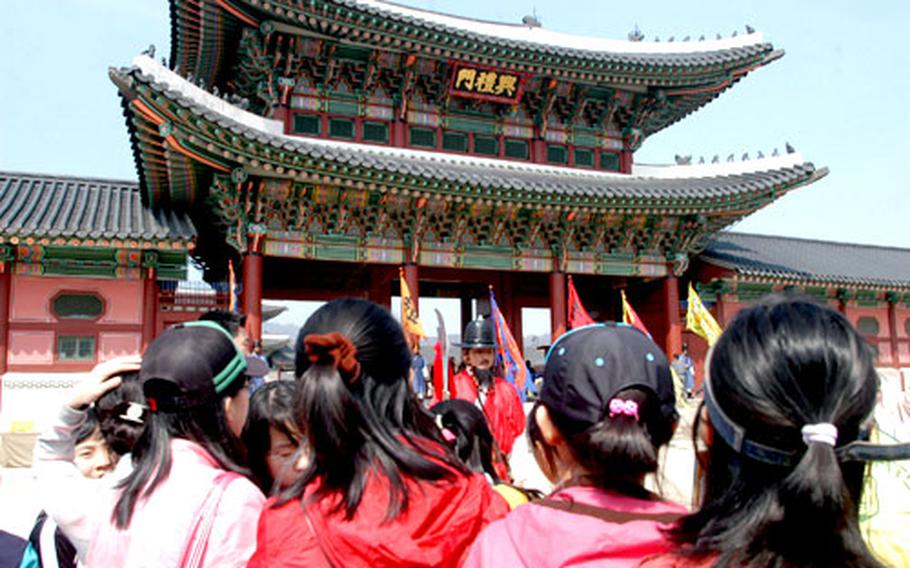 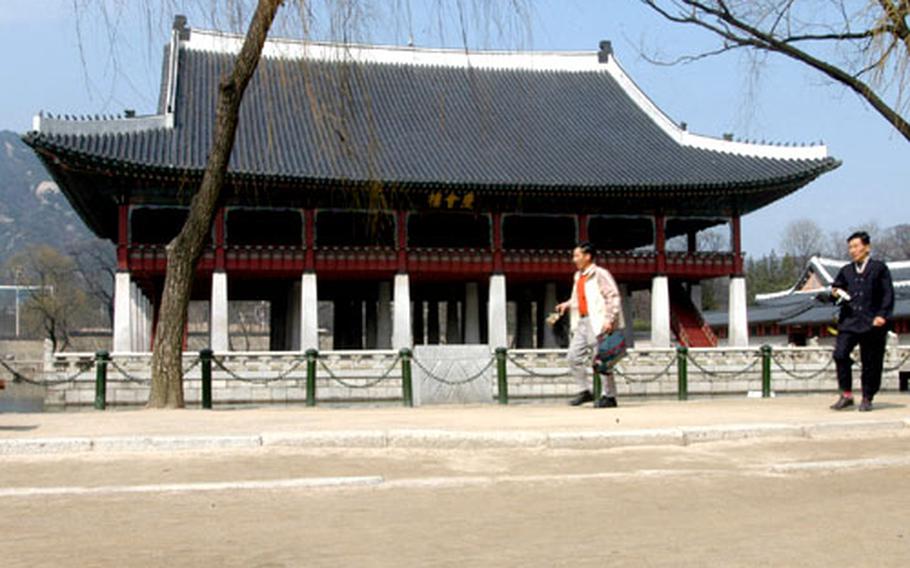 One of the more serene structures on the grounds of the palace is Gyeonghoeru, surrounded by a pond lined with trees. (Jeremy Kirk / S&S) 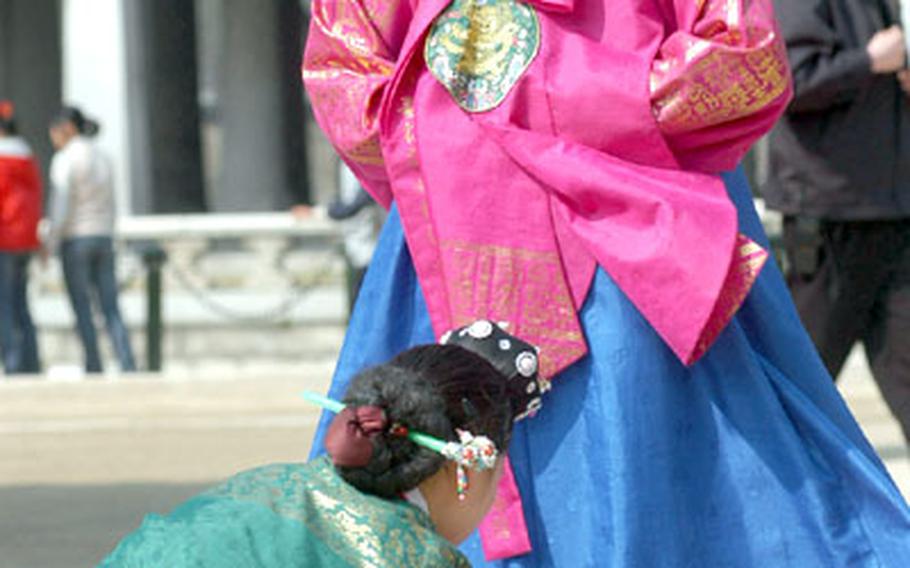 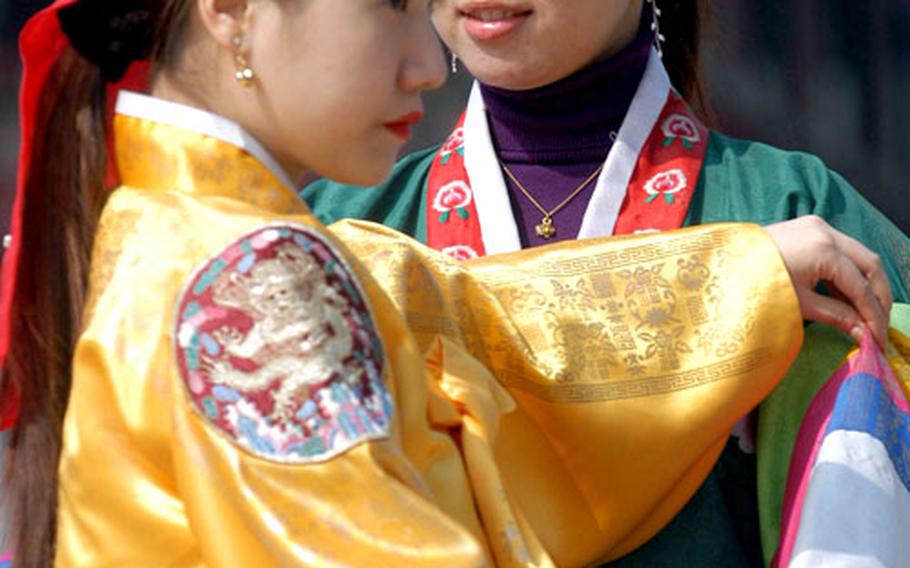 Traditional Korean dresses called hanboks are available on racks near Gyeonghoeru, a structure surrounded by a pond lined with trees, for those who’d like to dress up for a photograph. (Jeremy Kirk / S&S)

On most afternoons, a stroll by the massive stone and wood gates of Gyeongbok Palace in central Seoul will find royal guards holding their posts as they did 500 years before.

Korea&rsquo;s power structure was historically centered within this complex, a structure similar to the Forbidden City in Beijing but much smaller and more manageable in scale. The palace marked the beginning of Korea&rsquo;s Chosun Dynasty, a 500- year turbulent period in which the country struggled against foreign powers.

It was also a period of invention, including the creation of hangul, a script created by scholars for the Korean people that took away the complexities of learning hundreds of Chinese characters. Confucianism &mdash; a strong devotion to family and learning &mdash; also took root.

Over the last 14 years, the South Korean government has worked to restore the palace to its original crisp splendor. At its height, the grounds had about 330 buildings, and the goal is to restore about 40 percent of them by 2009 at a cost of about $150 million, said Park Wang-hui of the Cultural Properties Administration&rsquo;s royal palace and tombs division.

Give the credit to Yi Seong- gye, better known as King Taejo, for creating the palace. After years of fighting, Taejo booted the Mongols out of Korea and seized the throne in 1392. Three years later, the place was finished, creating a stately court in which to tackle the country&rsquo;s problems.

With a main structure for Taejo&rsquo;s business, the 5.4 million square foot complex has quarters and rooms for affairs of the state and the royal family. But the palace complex was also a victim of Korea&rsquo;s history of invasion at the hands of the Japanese.

Japanese invaders were repelled in the late 1500s, thanks in part to the Admiral Yi, the Navy commander cast in concrete along Sejong-ro, the long street leading up to Gyeongbok Palace. But it was after the Japanese managed to burn down most of the temples and wooden buildings to the stone supports.

Fire is the biggest threat to wooden buildings, but bulgsari &mdash; mythical stone creatures &mdash; were placed on stone railings to ward off flames. Prominent near Gyeonghoeru &mdash; a beautiful structure lined by a square artificial pond &mdash; the bulgsari are believed to have saved the building during artillery barrages in the 1950-53 Korean War.

As a response to invasion, Korea sought to shut itself off from foreign influences, earning it the nickname &ldquo;The Hermit Kingdom.&rdquo; To this day, South Korea retains a xenophobic tinge abated somewhat by its free market ambitions. When the Japanese invaded again in 1910 and annexed Korea, all but 10 buildings were destroyed.

From March to November on every day except for Tuesday, tourists can see the changing of the royal guards. It&rsquo;s a re-enactment of how the guards used to keep watch over the palace gates. It happens roughly every two hours between 10 a.m. and 4 p.m.