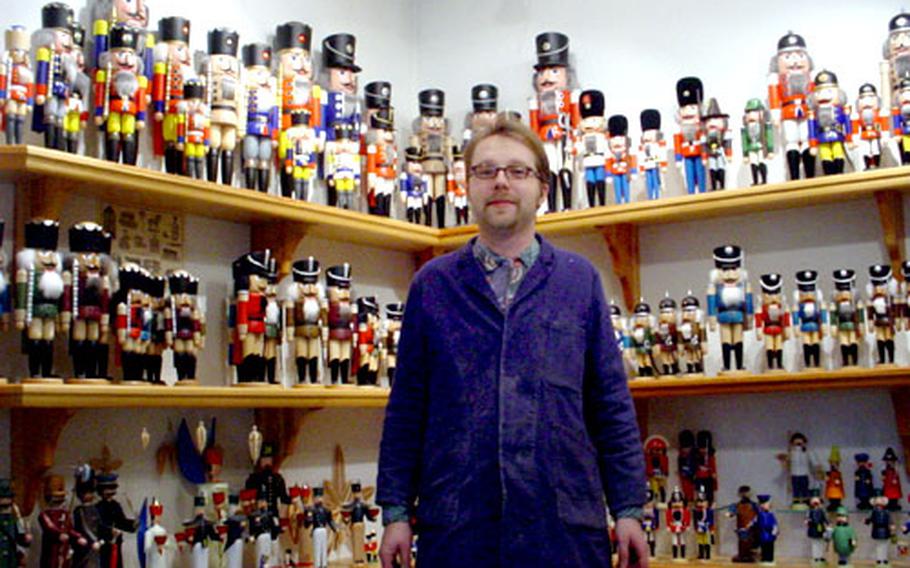 Sven Reichl is among the artisans working at the Seiffen Folk Art Cooperative, one of dozens of groups in the town that produces wooden toys and ornaments. He followed in the footsteps of his grandfather, the first toymaker in the family. (Alfred Kueppers / Special to S&S)

Sven Reichl is among the artisans working at the Seiffen Folk Art Cooperative, one of dozens of groups in the town that produces wooden toys and ornaments. He followed in the footsteps of his grandfather, the first toymaker in the family. (Alfred Kueppers / Special to S&S) 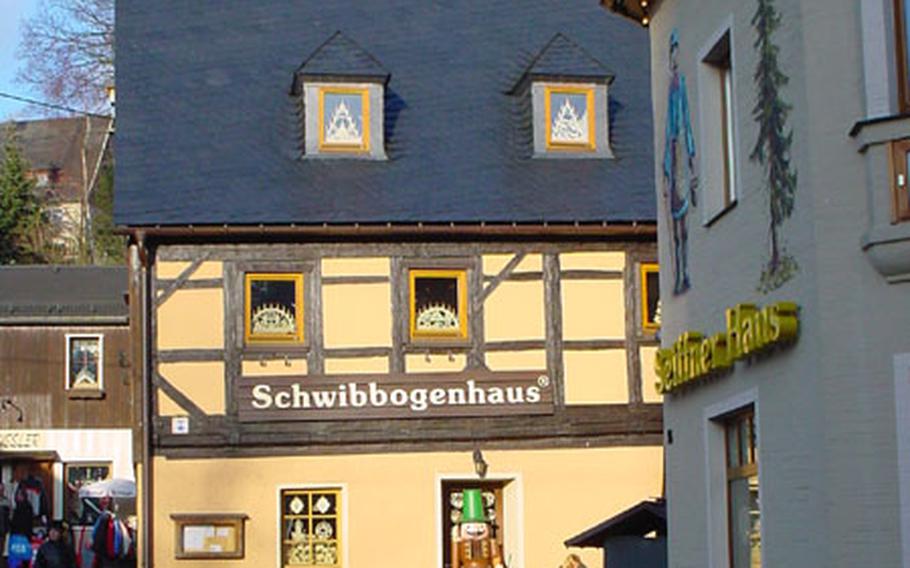 The Christmas ornament shop in Seiffen, Germany, is a pleasant place to get away from crowded cities, and a good place to shop for toys and ornaments. (Alfred Kueppers / Special to S&S) 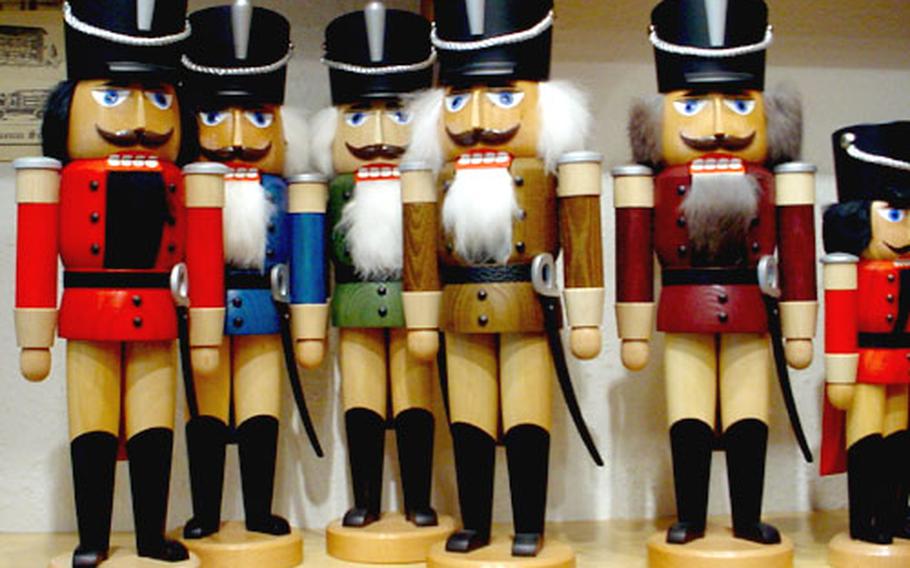 Every December, locals and tourists in search of a traditional German Christmas head for Bavaria, and the fairy-tale holiday markets of small towns such as Rothenburg ob der Tauber and larger cities such as Nuernberg.

There they will find more than a few market stalls selling carved wooden ornaments, candle holders and the popular nutcrackers.

But you won&rsquo;t meet the craftsmen and women who make these traditional decorations in Bavaria. To do that, head east, across the former Iron Curtain and into the Erzgebirge, or &ldquo;Ore Mountains,&rdquo; a sparsely populated region along the Czech border where the artisans practice their craft.

Seiffen, population 3,000, is the center of the wood-carving industry. Those who make the trip will be able to meet people like Sven Reichl, 32, who works at the Seiffen Folk Art Cooperative, one of dozens of groups in town producing the wooden toys and ornaments.

&ldquo;My grandfather was the first toy maker in the family,&rdquo; he says. &ldquo;Then I followed in [his] footsteps. Most of the families in the village could tell you a similar story.&rdquo;

Artisans like Reichl have helped make Seiffen a bright spot on eastern Germany&rsquo;s otherwise grim economic landscape. Overall, unemployment averages 17 percent in the state of Saxony, but in this bucolic village it is below 5 percent.

&ldquo;Everyone has a job here,&rdquo; says Brigitte Kirsche, director of the Seiffen tourist bureau. &ldquo;You might not make big money, but people in the region have always lived modestly.&rdquo;

The Erzgebirge, as the name implies, first lured settlers in the 12th century with its deposits of silver and other metals. But all too often, as was the case with Seiffen&rsquo;s tin deposits, the ore ran out and jobs disappeared.

By the 17th century, the miners turned to woodworking, producing all sorts of plates, wooden boxes and other household goods.

The region&rsquo;s first innovation came around 1800, when the woodworkers began to perfect &ldquo;ring turning&rdquo; &mdash; spinning a hollow section of spruce or ash on a lathe and etching it so that when finished it can be sliced into sections in the shape of houses, animals and other toys.

Reichl and his colleagues use the same technique to make toys today.

&ldquo;You can produce about 40-60 sheep from a single spruce ring,&rdquo; Reichl explains. &ldquo;It&rsquo;s an early form of mass production.&rdquo;

Nutcrackers were next. Local historian Konrad Auerbach says Seiffen can&rsquo;t lay claim to inventing the Christmas-time favorites since &ldquo;nut biters,&rdquo; as they were then called, first appeared in the Alps in 1650.

But it was in Seiffen, with its well-established toy industry, that nutcracker production really took off. Wilhelm F&uuml;chtner, a local craftsman, began to carve the grim-faced soldiers in 1870, and others soon followed.

After that, the Christmas industry boomed. Craftsmen introduced hollowed-out wooden figures known as R&auml;ucherm&auml;nnchen, or &ldquo;little smoking men&rdquo; who are filled with incense that, when burned, emerges as smoke from their mouths.

Next came wooden pyramids depicting village scenes or Christmas-themed religious motifs topped with propellers that spin when they come into contact with hot air from candles placed below. Candleholders, village miniatures, wooden miners and dozens of other motifs were added to the mix.

After World War II, Seiffen became part of the Soviet occupation zone and then communist East Germany. But the government, desperate for hard currency, gave the villagers considerable freedom to keep producing, provided they turned profits over to the state.

As a result, nutcrackers became a rare commodity in East Germany that could be used to barter for other rarities, such as tiles or cement.

&ldquo;There used to be one day a year, usually the second Sunday in December, when our citizens could buy the products,&rdquo; says Auerbach. &ldquo;People used to stand in line for hours, but even then they were only getting second- or third-rate products.&rdquo;

Another consequence was that when the communist government collapsed, Seiffen had plenty of toys, but nowhere to send them. Previously, the government negotiated all the contracts, meaning that the craftspeople had no contacts with retailers.

&ldquo;We never used to know where the toys were sent,&rdquo; Reichl recalls. &ldquo;So it was tough, the entire structure broke down and we had to learn how to build it up again.&rdquo;

But the cooperative rebuilt its business, and if it weren&rsquo;t for a major fire eight years ago, Reichl says it would be turning a profit.

Andreas Bilz, director of the Folk Art Cooperative, estimates that between 5 and 10 percent of its production is sent to the United States, with most of the rest being sold in Japan and Europe&rsquo;s German-speaking countries.

While nutcrackers and other Christmas ornaments are going out, tourists are coming in. They stroll Seiffen&rsquo;s tidy main street in search of bargains and relieve the stress built up in Germany&rsquo;s crowded cities by taking long walks in the rolling hills and forests that surround the town.

Kirsche says that during communist times, the area was popular with state-owned companies that bought up properties for their workers to use as vacation homes. Since then, private enterprise has taken hold, and the town has created a Western-style tourism industry.

&ldquo;We had reached a certain level of renown in East Germany, and that really gave us something to build on,&rdquo; Kirsche says. &ldquo;Now, tourists come by bus as part of their visit to other eastern destinations such as Dresden, Leipzig or Berlin.&rdquo;

About 700,000 tourists visit Seiffen each year, with about one-third arriving during the Christmas season. There are now more than 20 hotels and bed-and-breakfasts along with 54 woodworking studios.

Seiffen remains far enough from the tourist trail that it&rsquo;s been able to avoid the kitschy extremes of some of western Germany&rsquo;s more popular destinations.

&ldquo;The key for us now is to develop mountain-biking and hiking trails that will attract more young people,&rdquo; Kirsche said. &ldquo;But it&rsquo;s a process, and right now we&rsquo;re still beginners.&rdquo;

Alfred Kueppers is a journalist based in Frankfurt, Germany. E-mail him at akuep1@yahoo.com.