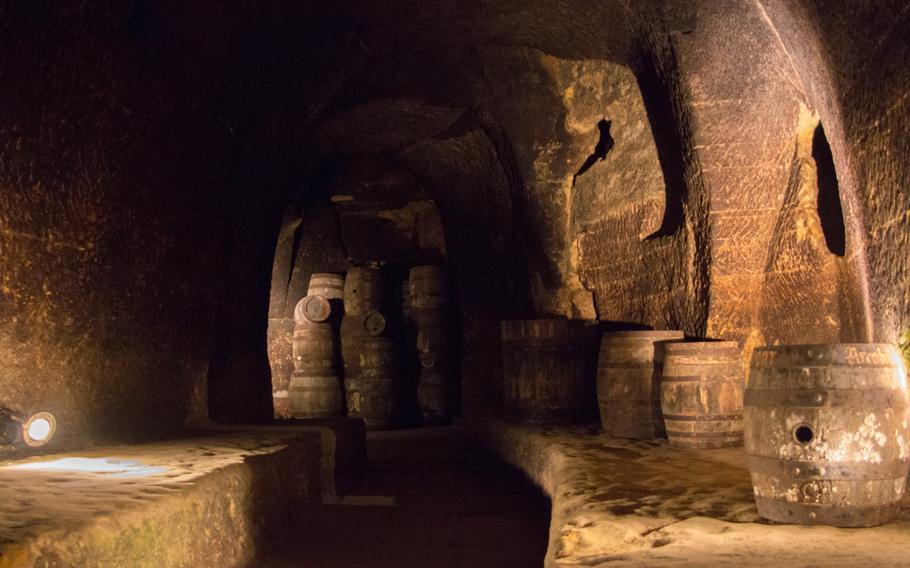 The first room of the labyrinth holds empty beer barrels, a reminder of the maze's beginnings as a town-wide beer storage area. (Michael S. Darnell/Stars and Stripes)

The first room of the labyrinth holds empty beer barrels, a reminder of the maze's beginnings as a town-wide beer storage area. (Michael S. Darnell/Stars and Stripes) 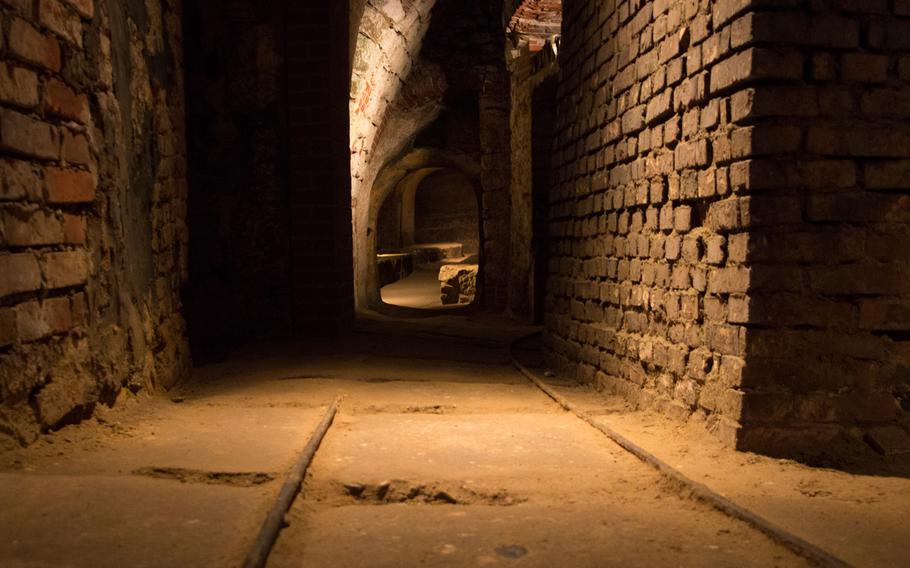 The remains of a rail system, used to move barrels of beer and other items, can still be seen in certain areas of the labyrinth below Schwandorf, Germany. (Michael S. Darnell/Stars and Stripes) 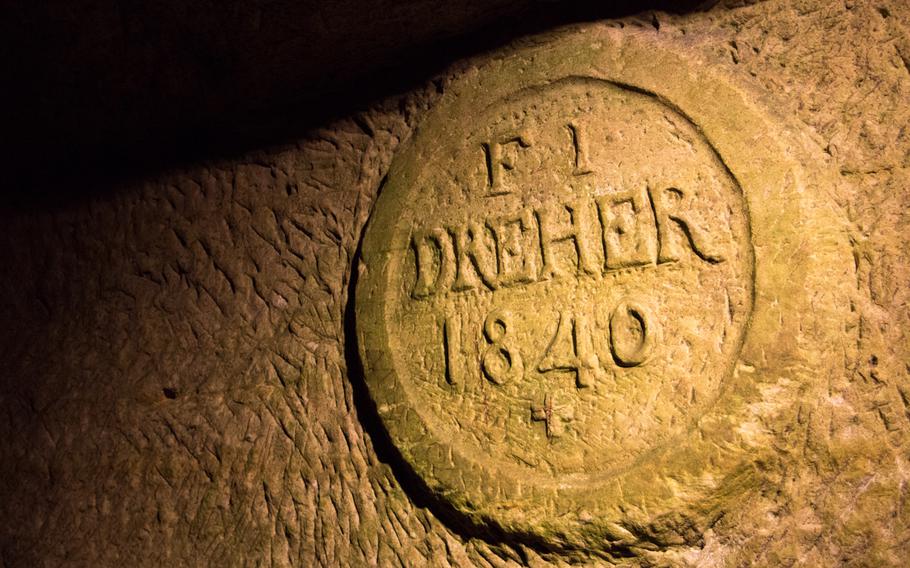 At least one of the rooms in the cave labyrinth under Schwandorf, Germany, has a seal from one of the dozens of brewers who once used the caverns for storage. Considering parts of the labyrinth date back to the 1500s, this seal from 1840 is relatively modern. (Michael S. Darnell/Stars and Stripes) 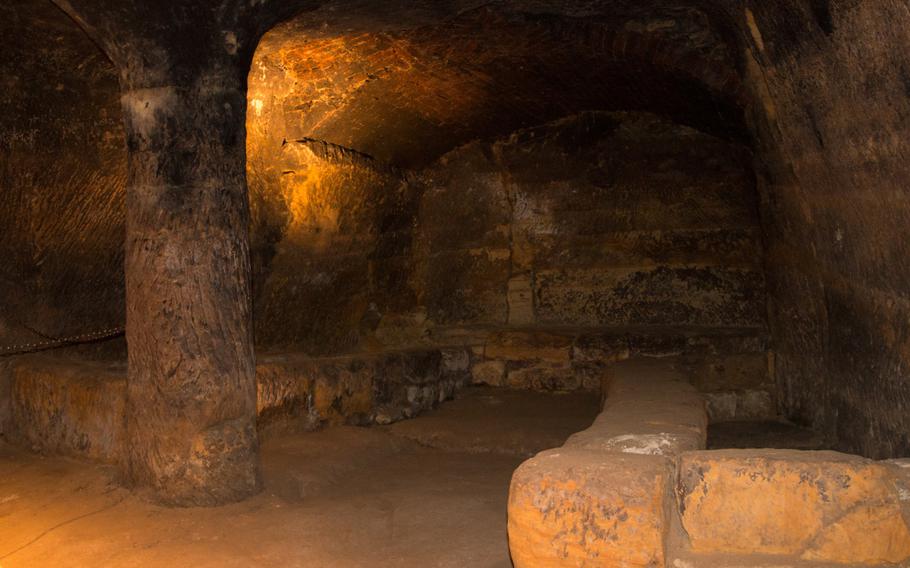 The Felsenkeller-Labyrinth is a series of underground tunnels. The sheer dedication and time it took for the towns people in past centuries to carve out every nook and cranny make it a fascinating destination. (Michael S. Darnell/Stars and Stripes) 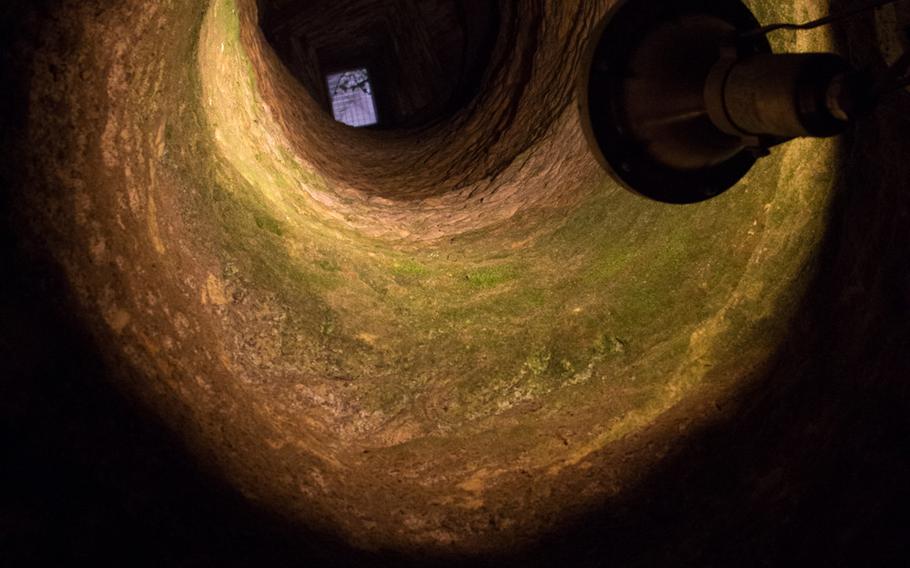 Some areas of the Felsenkeller-Labyrinth in Schwandorf, Germany, are more than 30 feet below the town. Hand-carved air shafts, too small for adults, provide a sense of what it took to create the caverns in the days before gas-powered rock drills. (Michael S. Darnell/Stars and Stripes) 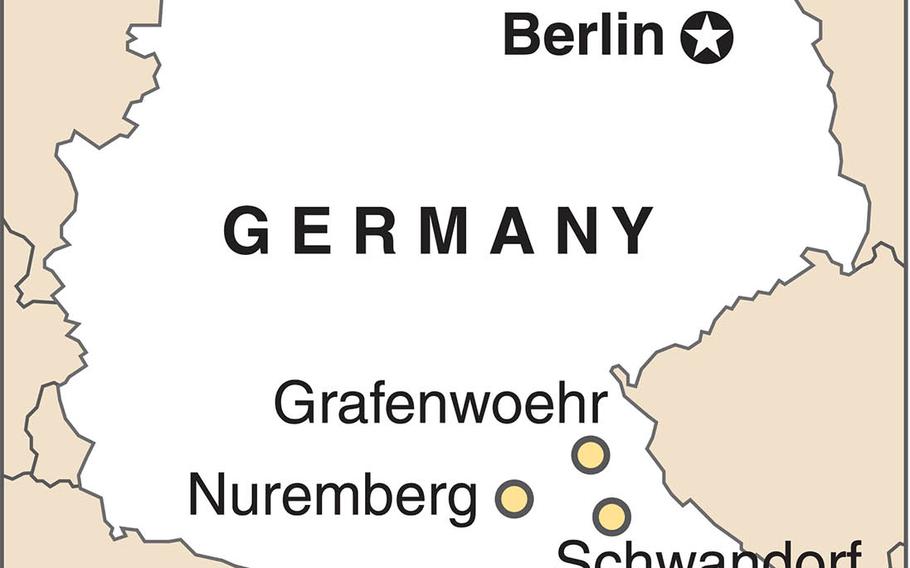 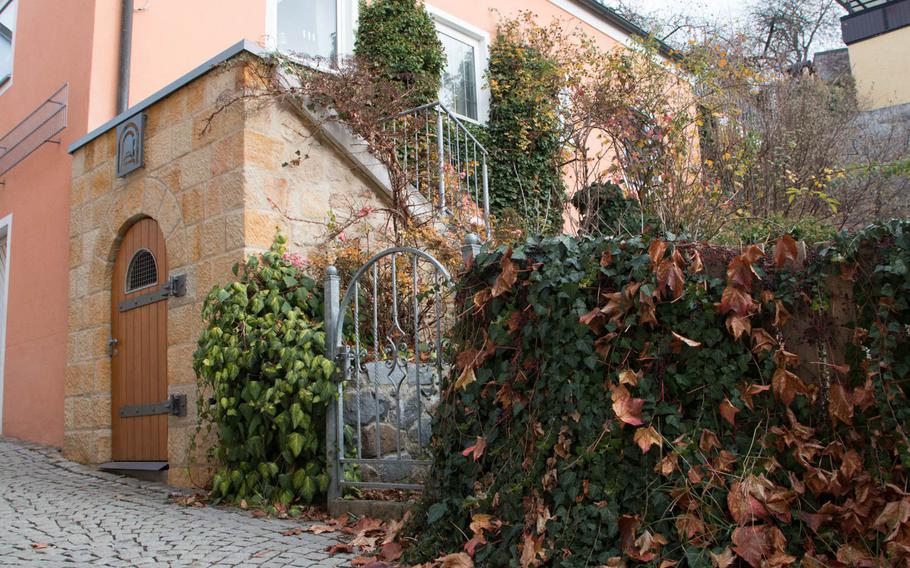 Much like the underground labyrinth itself, the entrance to the caverns below the town of Schwandorf, Germany, is not really publicized. It is nestled in the middle of the town's central residential area. (Michael S. Darnell/Stars and Stripes)

Part of Bavaria’s charm is its diversity. From the sprawling urban landscape of Munich to the pristine Bavarian Alps, this region of the country boasts some of the most celebrated aspects of German culture.

But there is more to Bavaria than the typical tourist spots. Residents know to look for the region’s beauty and wonder in lesser-known spots where history comes alive.

For instance, the rock cellars labyrinth of Schwandorf is not listed on popular websites and could be easily overlooked. But for history buffs and fans of the unusual, the carved Felsenkeller-Labyrinth is a sight to behold.

Dating to the 16th century, this maze of 60 connected caverns is a testament to both German ingenuity and the much-celebrated love of beer. Each of the chambers was once part of an underground network of storage rooms.

For the most part, the labyrinth was used for beer storage, though it has served as a bomb shelter and even a Nazi headquarters.

Chisel marks, made by the untold number of people who carved the massive structure by hand, are still visible on the walls. So, too, are the remains of an elaborate piping system that used to connect the kegs below to the pubs above ground. It’s an interesting look into how beer has driven some truly remarkable feats of engineering.

Guided tours of the maze cover its history. They run Wednesday-Sunday through the rest of the year. The times shift depending on the day but are generally in the afternoon.

Groups can schedule tours for nearly any time and date as well, though those become a little more costly. Apparently, “nearly any time” includes midnight tours, if you’re inclined to go spelunking after dark. A specialized English-language group tour is available for 80 euros, regardless of the group’s size.

There is also a concert hall in one of the 130 caverns under Schwandorf. Twice a month, a variety of bands come through the area, offering what has to be a unique concert experience.

TIMES Scheduled tours change with the day and season. Groups can schedule tours nearly any time and date.

COSTS There is a parking garage near the town’s center that costs about a euro or two for the duration of the tour. Prices of the scheduled, German-language tours are 5 euros per person or 12 euros per family. An English-language tour is only available at a group rate of 80 euros.

FOOD Schwandorf has many restaurants, bakeries and cafes.