Sanliurfa: Land of the prophets The main mosque and religious school dominate the center part of Sanliurfa’s Pool of Abraham. Beyond is the old city, with no buildings more than three stories. (Terry Boyd / S&S)

The main mosque and religious school dominate the center part of Sanliurfa’s Pool of Abraham. Beyond is the old city, with no buildings more than three stories. (Terry Boyd / S&S) 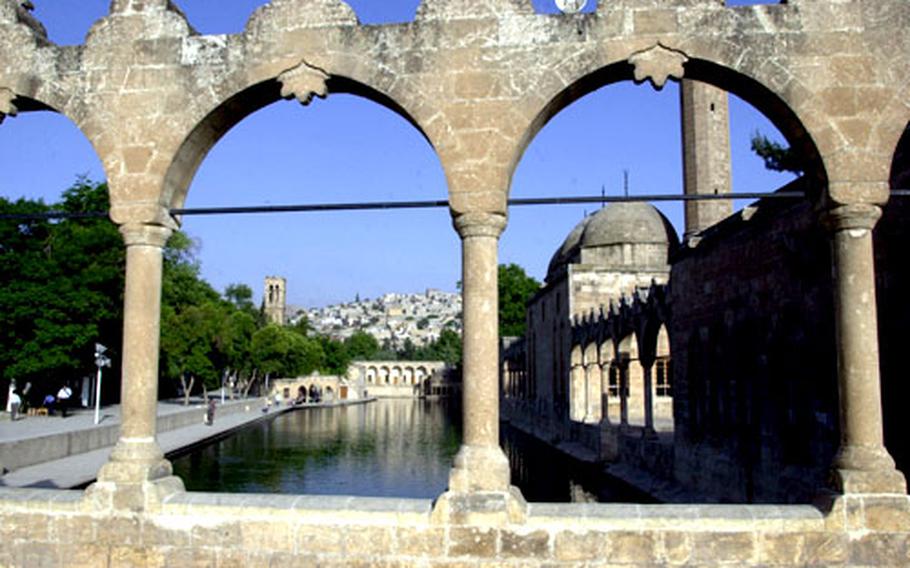 The architecture and setting make the Pool of Abraham one of Turkey&#39;s most inviting sites. (Terry Boyd / S&S) 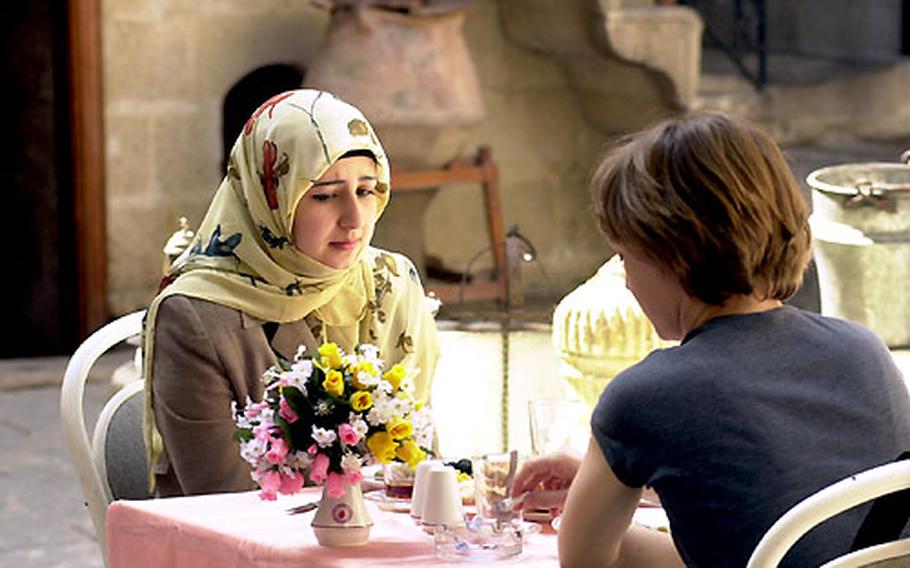 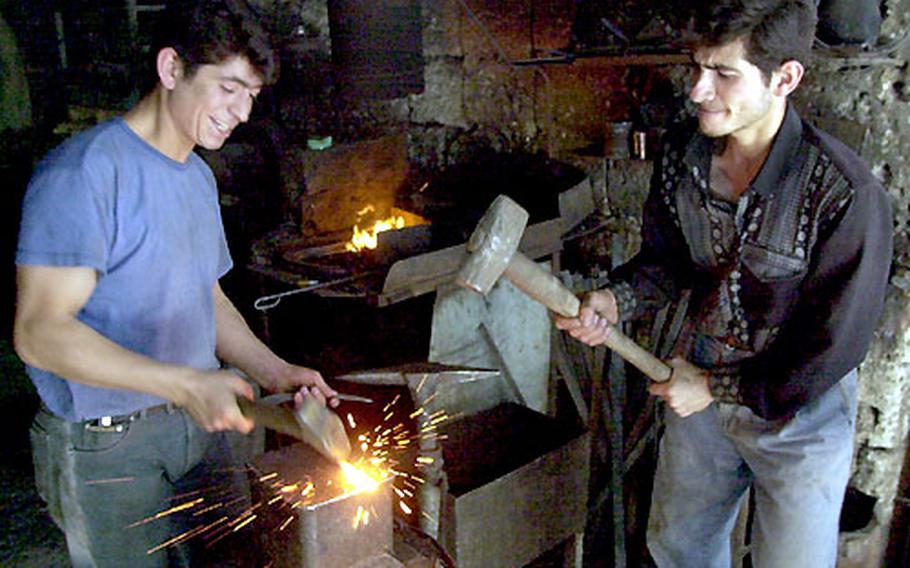 Young men start as children working as apprentices at the thousands of iron and copper works at Sanliurfa&#39;s bazaar. (Terry Boyd / S&S) We &mdash; my buddy Levent and I &mdash; are sitting at the balcony bar at the Edessa Hotel, the second most expensive joint in Sanliurfa, Turkey.

Sanliurfa is so far off the beaten path that I half expect to see Sir Richard Burton, T.E. Lawrence and all the other 19th- and 20th-century explorers who once roamed the Middle East clustered around the bar across from us.

In the new century, Sanliurfa remains an exotic destination by just about any measure.

Modern and ancient by turns, the town has a holy site and &mdash; for my money &mdash; the most authentic bazaar in Turkey. But in the grasp of some of Turkey&rsquo;s more conservative imams, it has maybe three restaurants where you can get a drink, one of those being the Edessa. After days of crisscrossing southeastern Turkey&rsquo;s immense plains, we are deeply, gratefully into our second raki &mdash; Turkey&rsquo;s anis-flavored national drink &mdash; when I overhear a Canadian tourist at an adjoining table making light of Sanliurfa&rsquo;s sacred shrine.

&ldquo;We saw the carp pond today,&rdquo; she tells a table full of her fellow travelers, most of whom are from Toronto.

I don&rsquo;t know if it was the raki, the fatigue or if the woman really was as condescending as she sounded, but Levent &mdash; a native of Toronto &mdash; and I turn on her simultaneously. With not so much as a howdy-do, we launch into tirade/lectures: The Pool of Abraham &mdash; a glorious oasis of clear pools, oriental architecture, mosques and gardens &mdash; is holy to several Islamic sects, and could you please make an ass of yourself somewhere beside the town&rsquo;s second-best bar?

Sanliurfa is like that &ndash; a place so genuine that it instills notions of being a conservator, a guardian of tradition, if you would. On the other hand, there is no affluence without an influx of tourists, even though that badly needed cash will change Turkey&rsquo;s Wild, Wild East forever.

At the town&rsquo;s bazaar, we run into Ara Guver, an Istanbul-based author and contract photographer for a number of international publications, including Time magazine. Jaunty in his photojournalist get-up, Guver looks a bit out of place amid Osama bin Laden lookalikes in flowing robes and beards.

&ldquo;Here is real!&rdquo; he exclaims as he rests on a bench after a morning of shooting. &ldquo;Istanbul has lost everything!&rdquo;

A bit of hyperbole, but I understand the sentiment. Istanbul is still my favorite city in the world, but it long ago lost its soul to modernity. This place has not.

Around us, people buy and sell every conceivable item. Craftsmen bang copper and brass into utilitarian forms. An Arab woman in purple robes carefully takes a lighter so as not to touch the male vendor&rsquo;s hand. Spicy lamb on the grill mixes with incense. Old Arabs and Turks squat while appraising kilos of loose tobacco.

And the tea. Vendors race up and down the indecipherable, catacomb-like hallways, trying to keep up with a never-ceasing demand for the reddish-black brew.

As we try to take in our surroundings, Guver tells us to savor what we are seeing. &ldquo;Take lots of pictures because in five years when you come back, it won&rsquo;t be the same.&rdquo;

Twenty years ago, he says, he came here and there were no signs of the 20th century. No traffic jams. No billboards or commercial clutter.

&ldquo;It was pure,&rdquo; he said. &ldquo;Twenty years from now, it will be sucked into the Industrial Age.&rdquo;

The government in Ankara added &ldquo;Sanli&rdquo; (&ldquo;glorious&rdquo;) to the town&rsquo;s former name of Urfa in 1973, a salute to the contribution its fighters made 50 years earlier after they turned the tide in Ataturk&rsquo;s 1923 revolution that made Turkey the Middle East&rsquo;s first secular republic.

Glorious or not, the town plainly is not every traveler&rsquo;s cup of tea, and one guidebook describes it as &ldquo;a town of no great beauty.&rdquo; Guver scornfully quotes an Istanbul colleague, who he said places Sanliurfa smack dab in the middle of &ldquo;mud-hut Turkey.&rdquo;

Not true. I call it God&rsquo;s country in the most literal sense an Anglo-Jewish agnostic can get away with without being struck by lightning. Quite apart from Mecca, the sacred birthplace of Islam, Turks consider Urfa the historic heart of Islam via its supposed connection to early Jewish prophets who preceded Muhammad.

Abraham and Lot lived here &mdash; or near here, in Harran to the south, according to the Bible &mdash; and Urfa was the target of two Crusades because this was once, believe it or not, part of the Holy Roman Empire.

Though it&rsquo;s never mentioned by name in the Quran, some Muslims believe Adam was born here by the description of the Garden of Eden. Of the 28 prophets of both the Quran and Torah, at least 20 resided in Urfa, according to Cahit Uyanak, the former Imam at the Abdurrahman Mosque and Madrassa, or religious school, on the west corner of the Pool of Abraham.

The ruins of a Macedonian fortress above, the series of pools is one of the most inviting sights in Turkey, surrounded by acres and acres devoted to open grassy areas and shady tea gardens. You can see mosques and minarets dating back 600 years to the Selcuks, along with late Ottoman architecture.

The series of large pools &mdash; where the water comes from in this arid land is anyone&rsquo;s guess &mdash; dates to at least the 12th century, but there are multiple legends and religious explanations in Islam for the sight.

Most claim that Abraham died here and ascended to heaven. Where the beliefs diverge is how he returned. Some say that he was reincarnated as a carp, and thus the swarming schools of overfed carp are treated reverently to this day. Time and again, boys crouching beside the pools assure me that they witnessed a cohort grab a particularly enormous one, only to be immediately struck blind.

Beliefs and legends aside, the Pool of Abraham is one of the most serene, inviting places I&rsquo;ve ever passed the hours. Just being there, drinking tea and watching the pilgrims feed the fish is as close to a religious experience as I may ever have. And I hope it never changes.

Which makes me &mdash; a secular Westerner &mdash; an ally of Uyunak, the ultra-conservative hoja who used to be head imam at the Pool of Abraham. We meet Uyunak, a clean-shaven, dignified man straight out of Turkish middle management, when Levent and I decided to look up local Muslim dignitaries to find out more about the religious history.

At first, Imam Uyunak doesn&rsquo;t want to talk to us, but Turkish hospitality dictates he offers tea. With gentle urgings from his young, gentlemanly replacement, the old imam warms to us, and we spend hours talking about the world, Islam&rsquo;s place in it, and his former fiefdom.

Soon it comes out that he has a story to tell. Uyunak was the Imam of Abdurrahman Camii (mosque) and Madrassa until a few months earlier, when he included a none-too-subtle parable in his Friday sermon. With Sanliurfa&rsquo;s mayor and municipal officials in attendance, he analogized local corruption to a huge pool with a crack in it, and thousand of liters of water leaking out.

Yet, official bookkeeping (shades of Enron, here) maintains the pool is full. &ldquo;How can that be?&rdquo; Uyunak said.

Local officials were not pleased that the old man was basically accusing them of siphoning off the pools&rsquo; proceeds and promptly retired him, leaving him to survive on a pension of 10 million Turkish lira a month (about $7).

But the real issue, Uyunak says, was he fought the city&rsquo;s plan to install a cultural center at the site with Turkish folk dancing in an open-air theatre. &ldquo;I warned the municipality, &lsquo;Don&rsquo;t change the authenticity of the site!&rsquo; &rdquo; Uyunak said. &ldquo;They were going to have dancing here. This is the home of Abraham, and they were going to have women dancing almost bare naked!&rdquo;

Levent fights to keep a straight face, then looks at me. I am not laughing.

I&rsquo;m thinking about the uneasy relationship between secular Turks and the devout brethren they so fear. I flash back on a busload of Turkish teens dressed in short shorts and revealing shirts I had seen earlier, traipsing loudly around the Pool of Abraham, and I decide this is one the Imam should win.

&ldquo;You do?&rdquo; the Imam says, looking at me for a long time.

&ldquo;You know,&rdquo; he says as we part, &ldquo;the thing I find most surprising is that non-Muslims are so often more respectful than the locals.&rdquo;

And I think about all the tension between the Islamic world and the West since Sept. 11, and how religious traditions come together here &mdash; no matter how fanciful the legends &mdash; and I think the Imam&rsquo;s words are the most hopeful I&rsquo;ve heard in months.