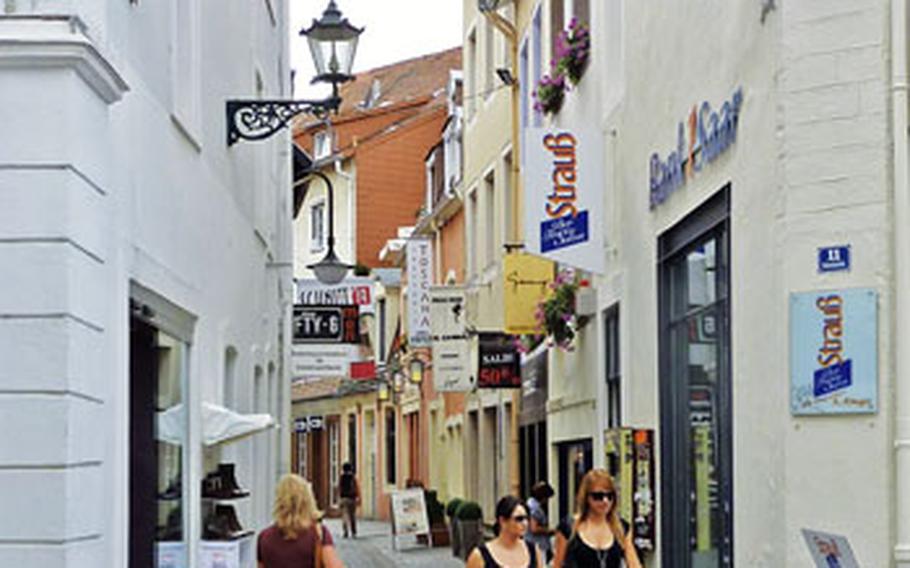 The Froschengasse, meaning frogs alley, is a narrow cobblestone lane lined with shops in Saarbrücken. ()

The Froschengasse, meaning frogs alley, is a narrow cobblestone lane lined with shops in Saarbrücken. () 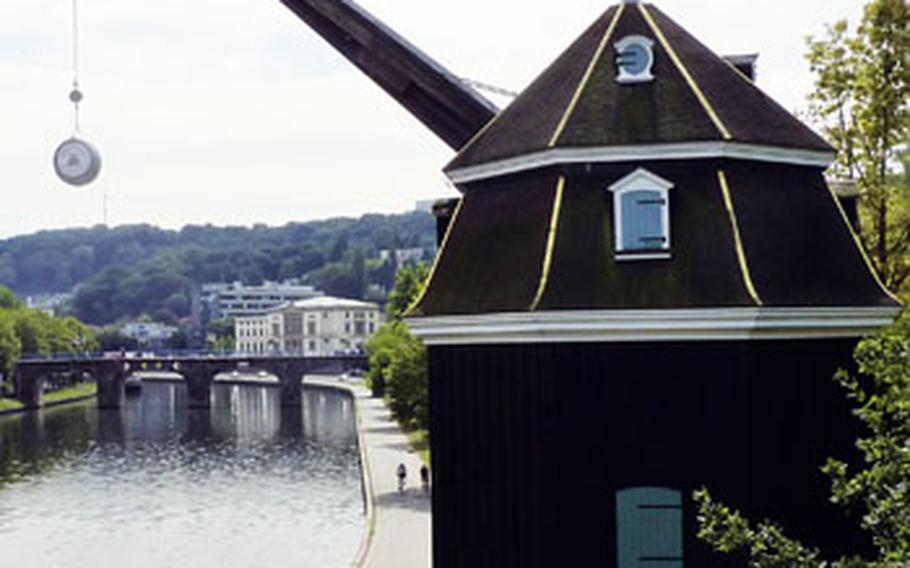 The Saar Crane on the banks of the Saar River was first built in 1761 but has been destroyed and rebuilt several times since. In the distance is the Alte Brücke, or Old Bridge, constructed in 1546. () 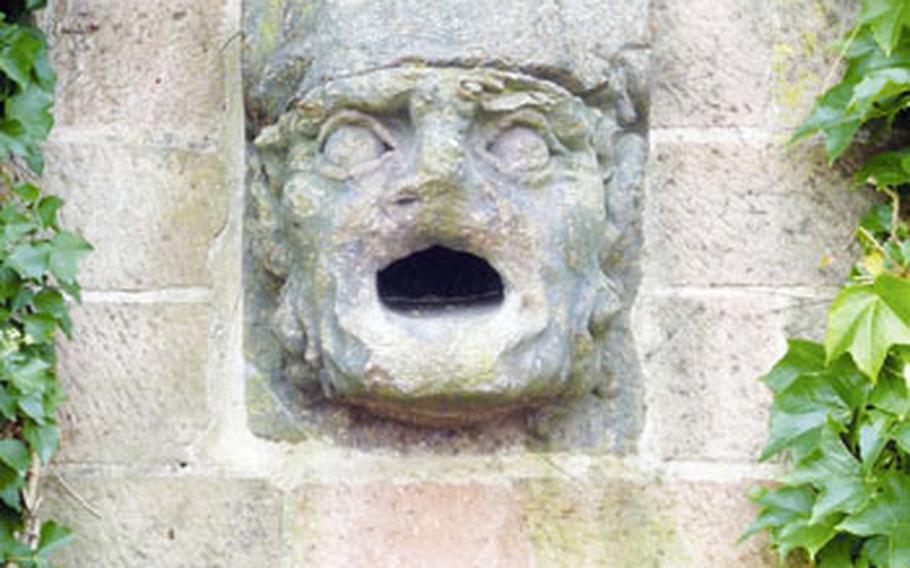 The “miserly baker” of St. Johann can be seen on the wall next to the stairs leading up to the castle. () 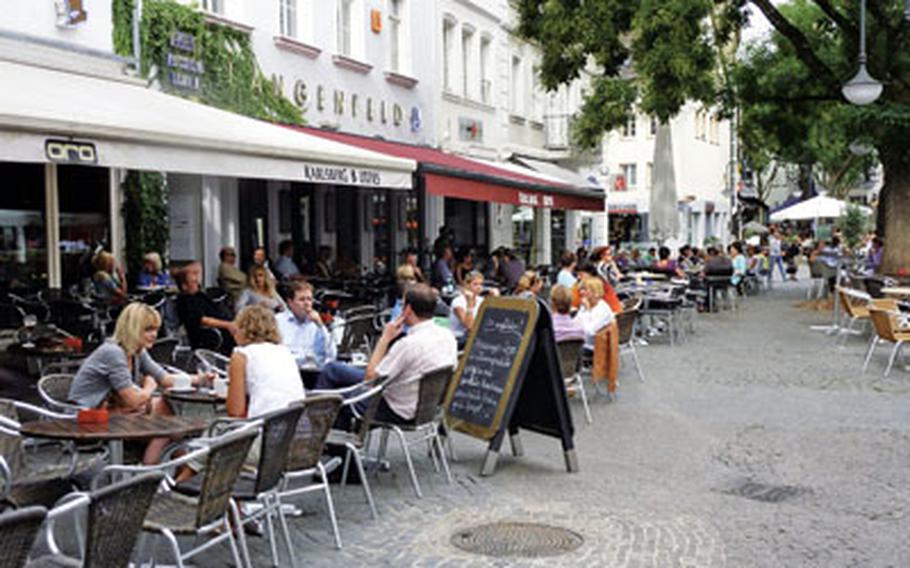 Buy Photo
A view of one side of St. Johanner Markt, a square in downtown Saarbrücken that is lined with cafes, bars and restaurants. (Photos by Michael Abrams/Stars and Stripes)

Saarbr&uuml;cken &mdash; or Saar bridges &mdash; is a perfect name for this city on the western edge of Germany, with its many bridges spanning the river.

But its name might not have anything to do with the structures.

The city, with Celtic origins, was once known as Sarabriga, meaning flowing water and cliff or big rock. Nevertheless, today&rsquo;s name is a perfect fit.

Old Saarbr&uuml;cken is the more staid part of town, while St. Johann is full of bistros, bars and boutiques. The city&rsquo;s sights are split between the two.

High on the outcrop overlooking the river and St. Johann is Saarbr&uuml;cken Palace. First mentioned in 999, it has been built, destroyed and rebuilt many times. Today&rsquo;s structure is based on an 18th-century baroque palace with a rather modern steel and glass central block. Today it is used for cultural events and is flanked by the Museum for Prehistory and Early History, the Museum of Regional History and the Saarlandmuseum&rsquo;s Old Collection of art works.

Behind the palace are its gardens with a panoramic view, and below it is the Castle Church, which also has a museum.

The other main sight in old Saarbr&uuml;cken is the baroque Ludwigskirche. It was built in the second half of the 18th century and designed as a cross-aisle building. Its airy feel, light interior and layout make it a rather unique church. It was destroyed in World War II and rebuilt.

A farmers market is held on its square on Saturday mornings.

You can cross the Saar on the Alte Br&uuml;cke, a 16th-century bridge built by Charles V. Thirteen arches supported it, but only eight remain. Rebuilt after World War II, it was shortened to make way for the city expressway that parallels the river.

Believe it or not, the towering castle wall was also moved back 50 feet to make room for the road.

While the other side of the river might have given the city its name, St. Johann has the Rathaus, or city hall. It is an imposing building, but don&rsquo;t let its looks fool you. It was built in neo-Gothic style and is only about 110 years old. Its tower is 178 feet high, and its fa&ccedil;ade is lined with statues representing a miner, a smelter, a farmer, a brewer, a merchant and a tanner. A statue of dragon slayer St. George also adorns the fa&ccedil;ade.

With its proximity to France, and the fact that it often belonged to that country, Saarbr&uuml;cken has a certain savoir-vivre.

Nowhere can this be better experienced than on St. Johanner Markt, the large square in the center of town. It is lined with cafes, bars and restaurants, and, especially when the weather is warm, is teeming with life. This area of the city is the place to mix commerce and culture.

Nearby Fr&ouml;schengasse is a narrow cobblestone lane lined with shops, and Bahnhofstrasse, which leads away from the square toward the train station, is a pedestrian shoppers&rsquo; paradise. For culture, there is the Stadtgalerie on the square with contemporary art exhibits, and, nearby, the Saarlandmuseum&rsquo;s Modern Gallery of art.

From the east, Saarbr&uuml;cken is just off Autobahn 6, near the French border. From Bitburg/Spangdahlem, take A1 south to the city. Trains from Kaiserslautern, Frankfurt and Mainz arrive at Saarbr&uuml;cken&rsquo;s main train station.

Parking costs 1.50 euros per hour in most of the downtown parking garages. Parking is free on the streets on Sundays. Many of the museums are free except for special exhibitions.

There are plenty of restaurants in all price classes and many tastes, from fast food to gourmet.

The city&rsquo;s Web site is www.saarbruecken.de. Click on the English flag and then the tourism button for information on the city.