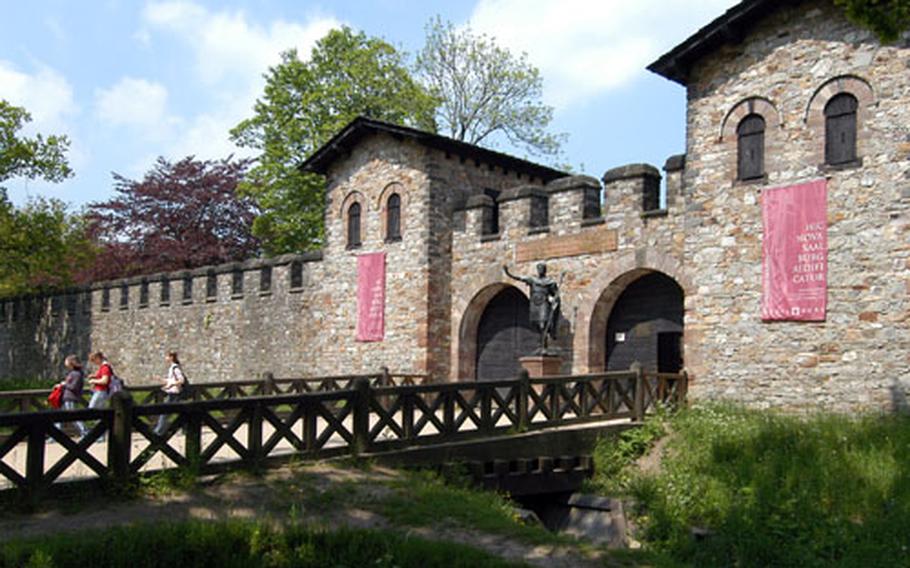 The main gate of the Saalburg, a reconstructed Roman fort in Germany&#39;s Taunus mountains. The fort and its museum offers an insight into Roman life in Germany at the beginning of the third century. (Michael Abrams / S&S)

The main gate of the Saalburg, a reconstructed Roman fort in Germany&#39;s Taunus mountains. The fort and its museum offers an insight into Roman life in Germany at the beginning of the third century. (Michael Abrams / S&S) 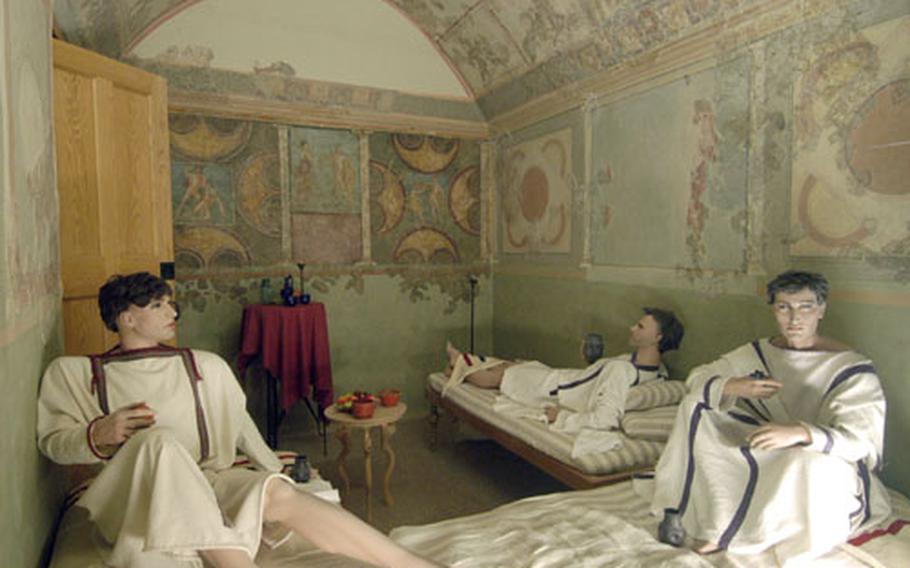 A diorama in the principia, or headquarters building, of the Saalburg shows how Roman officers lived at the fort, and how it was probably decorated. (Michael Abrams / S&S) 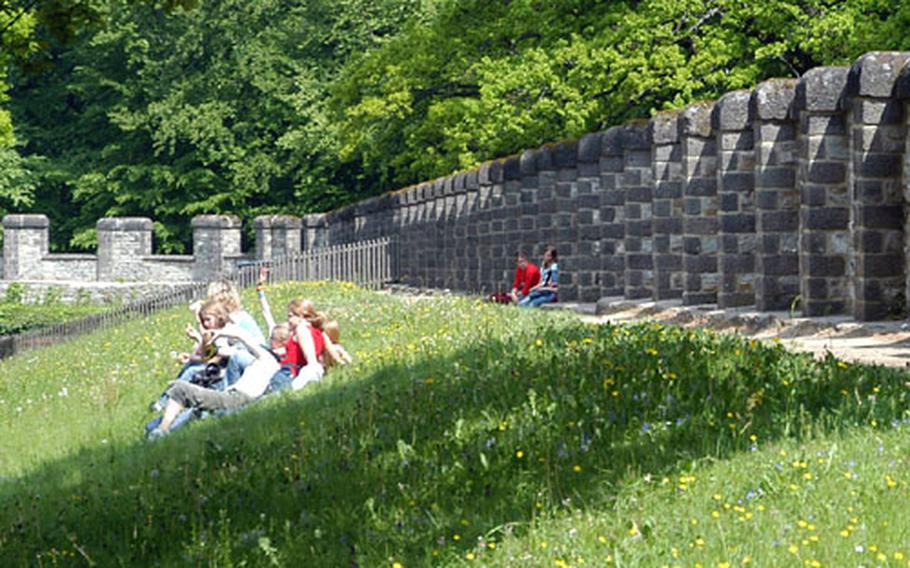 A group of schoolchildren sit along the ramparts of the Saalburg, a rebuilt Roman fort. (Michael Abrams / S&S) 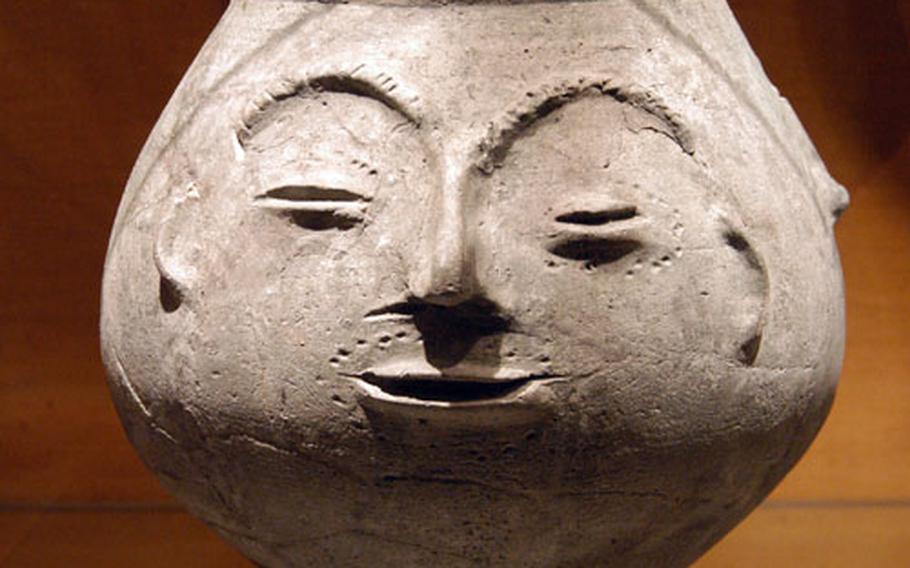 This clay pot with a face on it is on display in the Saalburg&#39;s museum, located in the horreum, the fort&#39;s granary. (Michael Abrams / S&S) 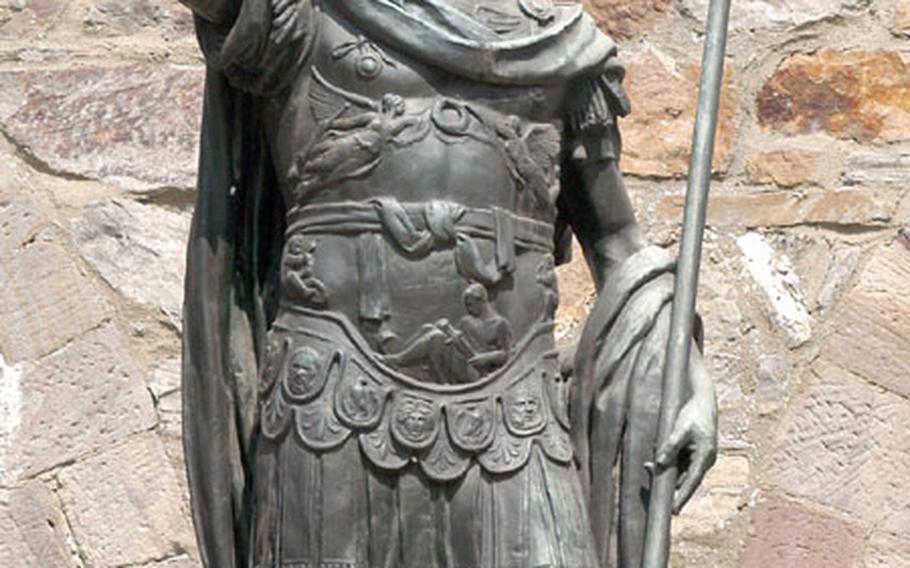 Emperor Antonius Pius hails you as you approach the Saalburg, a Roman fort tucked away in Germany&rsquo;s Taunus mountains.

Once it was an outpost guarding the borders of the empire. Today it is a place to step back into time and get an idea of how Roman soldiers once lived.

The Romans built a small wood fort here at the end of the first century to house the soldiers guarding the Limes, the northeast boundary of the Roman Empire.

The Limes was at first just a boundary track and a series of wood guard towers, but by the end of the second century it had been strengthened with a wood palisade, a ditch and an earthen rampart. Along with the legions guarding it, the Limes protected the empire from invaders from Koblenz on the Rhine river in the northwest to near Regensburg on the Danube in the southeast.

By this time, the little wooden Roman fort had been replaced by a large one made of stone. But around 260, warring Germanic tribes forced the Romans to retreat to the west bank of the Rhine, and the fort was abandoned, and fell into ruin.

In the Middle Ages, locals helped themselves to the fort&rsquo;s stones, and for centuries, only the outline of the fort could be seen.

In the mid-19th century archaeological excavation began at the site, and under German emperor William II, the fort was reconstructed between 1898 and 1907.

As you walk over the wood bridge, past the statue of Emperor Antonius Pius and through the gates of the Saalburg, the ticket window is on the left. The first big building on the right is the horreum, or granary, and it houses the fort&rsquo;s museum. Here there are pottery, tools, jewelry, leather shoes and weapons on display. There also is a model of the Saalburg as it probably looked in Roman times.

From the horreum, walk to the principia, or headquarters building in the center of the fort. It is a rectangular building surrounding an open courtyard. Maps on the walls of the main hall show the growth of the Roman Empire and where the Limes ran. The two bronze statues are of emperors Hadrian and Severus Alexander. The buildings on the other three sides of the principia also are used for exhibits that include altars, wall paintings and sculptures. One room has a diorama showing how the officers lived.

Outside you can walk along the wall of the fort, see the partial outline of the small wood fort, wells, a bathhouse and the baking ovens.

The Roman soldiers were given grain rations, and had to have their bread baked in the ovens. A couple of times a year, you can see how the Romans baked their bread, when the ovens of the Saalburg are fired up for demonstrations (July 24-25 and Aug. 21-22 this year).

Behind the horreum, wooden barracks have been reconstructed. One of them houses the Taberna, the Saalburg&rsquo;s cafe/restaurant.

Outside the Saalburg there also are remnants of Roman life. The road leading to and from the fort is an old Roman road that once ran to Nida, an old Roman town, today&rsquo;s Frankfurt-Heddernheim. The foundations of the mansion, an inn for traveling officials, and a large bathhouse can be seen on the right when you leave the fort.

On the left, the Roman road leads around the Saalburg, and down to the Limes, the fortified border that once protected the empire from the barbarian world on the other side.

Directions: The Saalburg is northwest of Frankfurt. From Hanau and W&uuml;rzburg, take Autobahn 3 toward Frankfurt, then switch to A661 toward Bad Homburg. Exit at Oberursel Nord, just before the autobahn ends. Take highway B456 north toward Usingen and you will come to signs pointing to the Saalburg. From Wiesbaden, take A66 to A5 to A661 and then follow the directions above. From the south take A5 to A661. From Giessen take A5 to the Friedberg exit, head away from Friedberg towards Neu-Anspach, follow the road until it meets highway B456, then take 456 south toward Bad Homburg, and you will see signs pointing to the Saalburg. Coming from Friedberg, follow the last part of the directions.

Food: You can bring your own food and enjoy it at one of the picnic tables on the complex, or eat in the Taberna, a snack bar in one of the reconstructed barracks. It offers snacks, sandwiches, sausages, drinks and ice cream, but is only open March through October and closed on Mondays.

More information: Visit the Web site at www.saalburg-museum.de. The Saalburg offers group tours in English, call (+49) (0)6175-937420 for information. For more fun in the area visit the Hessenpark open-air museum in Neu-Anspach, or the Lochm&uuml;hle amusement park in nearby Wehrheim.