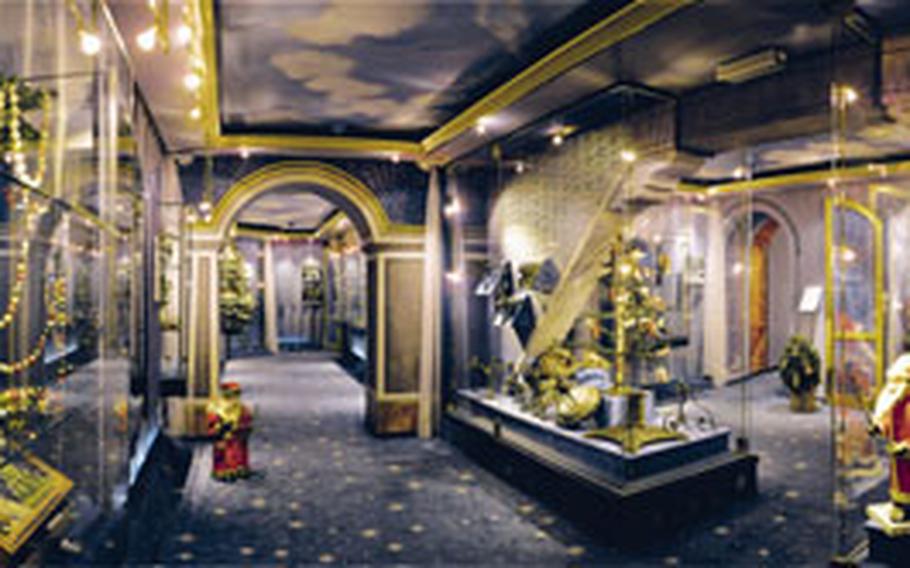 The beautiful museum has two levels of floor-to-ceiling exhibits tracing the development of Christmas traditions. (Courtesy of the German Christmas Museum)

The beautiful museum has two levels of floor-to-ceiling exhibits tracing the development of Christmas traditions. (Courtesy of the German Christmas Museum) 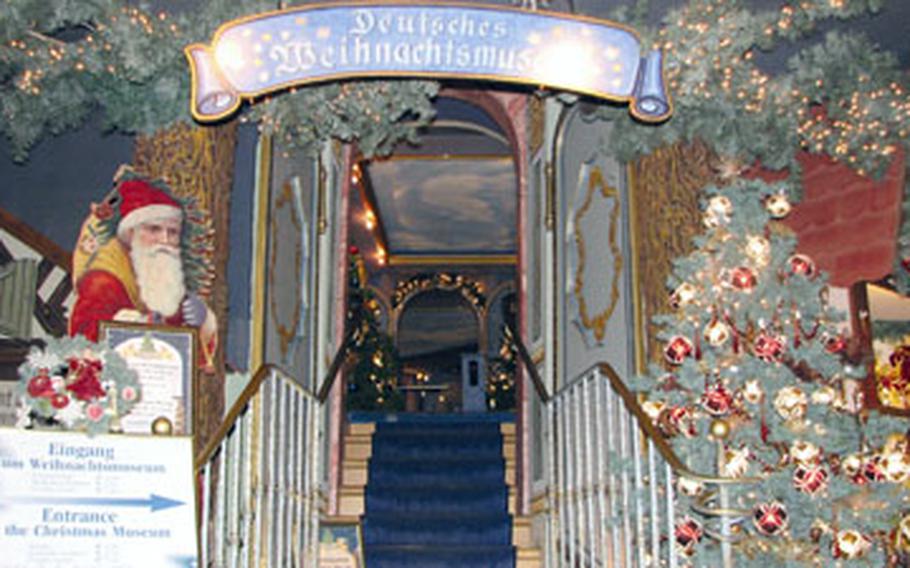 The German Christmas Museum in Rothenburg ob der Tauber, Germany, holds a trove of historic pieces from past Christmases. (Gayle Smith Padgett/Special to Stars and Stripes) 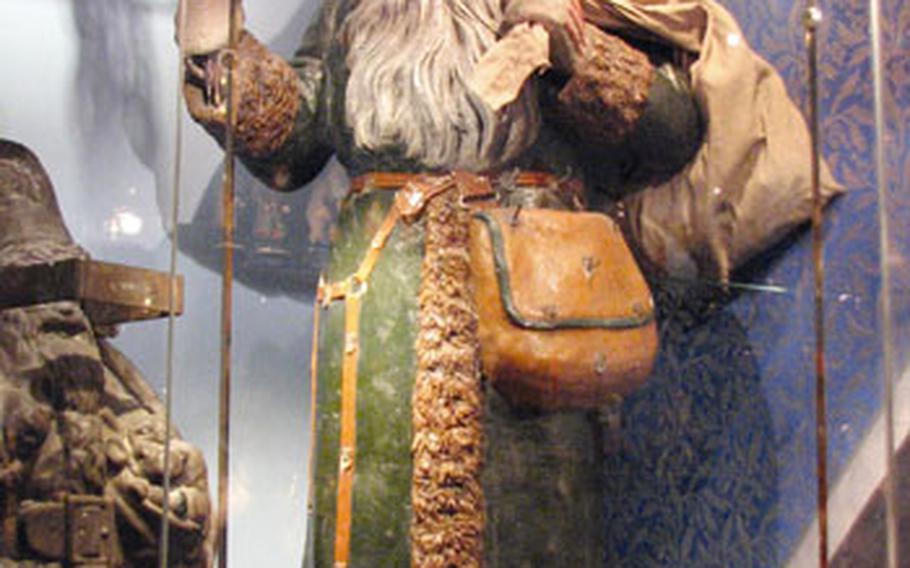 A large carving of St. Nicholas holds switches in his right hand as a stern reminder that he knows who has been naughty and nice. (Gayle Smith Padgett/Special to Stars and Stripes) 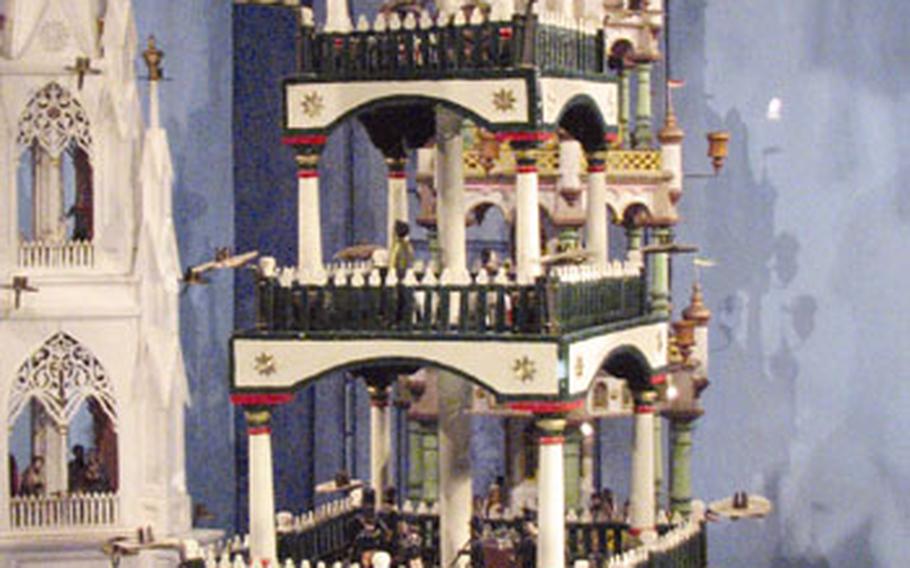 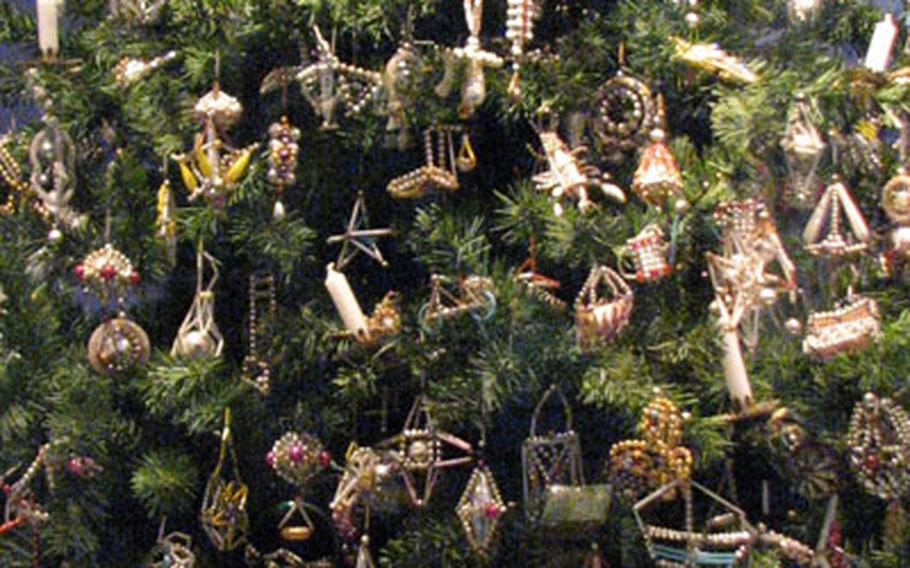 Delicate ornaments fashioned from glass beads and rods were created between 1920-1950 in Gablonz, a city now located in the Czech Republic. (Gayle Smith Padgett/Special to Stars and Stripes)

For a look at Christmas past &mdash; while searching out gifts for Christmas present &mdash; look no further than the enchanting German Christmas Museum in Rothenburg ob der Tauber, the star of Germany&rsquo;s Romantic Road and a magnet for holiday shoppers.

The museum, which opened in 2000, sits above K&auml;the Wohlfahrt&rsquo;s Christmas Village store. It has two stories of floor-to-ceiling, glass-enclosed displays that trace the history of the celebration of Christmas and Advent, as well as the evolution of holiday trimmings and symbols, such as the Christmas tree, tree ornaments, holiday cards, tree lights and ole Saint Nick. Each display is accompanied by well-researched and detailed descriptions in German and English.

Of particular interest is the collection of wood creations from Germany&rsquo;s Erzgebirge region, near the Czech border. Prior to the late 17th century, the economy in the ore-rich area was based on mining. When the demand for silver and pewter weakened, wood carving and lace making, previously only minor sources of income, came into their own. The museum showcases examples of this arts-and-crafts industry, including giant wooden Christmas pyramids, incense smokers and nutcrackers.

The idea for the museum came from Harald Wohlfahrt, son of Wilhelm Wohlfahrt, the founder of the Christmas store. He wanted to document Christmas-related festivities and preserve examples of the celebration. He began seriously collecting items for the museum in 1991 and scoured city archives to ensure historically accurate information. Those who want to learn more about items in his collection can schedule a guided tour, in English, by contacting the museum director.

The museum is at Herngasse 1 and is open throughout the holiday season, including Christmas Day and New Year&rsquo;s Day. The hours are generally 10 a.m. to 5:30 p.m., but are reduced on certain days. See the Web site, www.christmasmuseum.com, for exact times; it has an English-language version. Admission is 4 euros for adults, 2.50 euros for those eligible for discounts, and 2 euros for ages 6-11. Family and group tickets are also available.