Rolls were delivered as part of the pre-meal service at Rhubarb, a relatively new restaurant in Newmarket. (Adam L. Mathis/Stars and Stripes)

Rolls were delivered as part of the pre-meal service at Rhubarb, a relatively new restaurant in Newmarket. (Adam L. Mathis/Stars and Stripes) 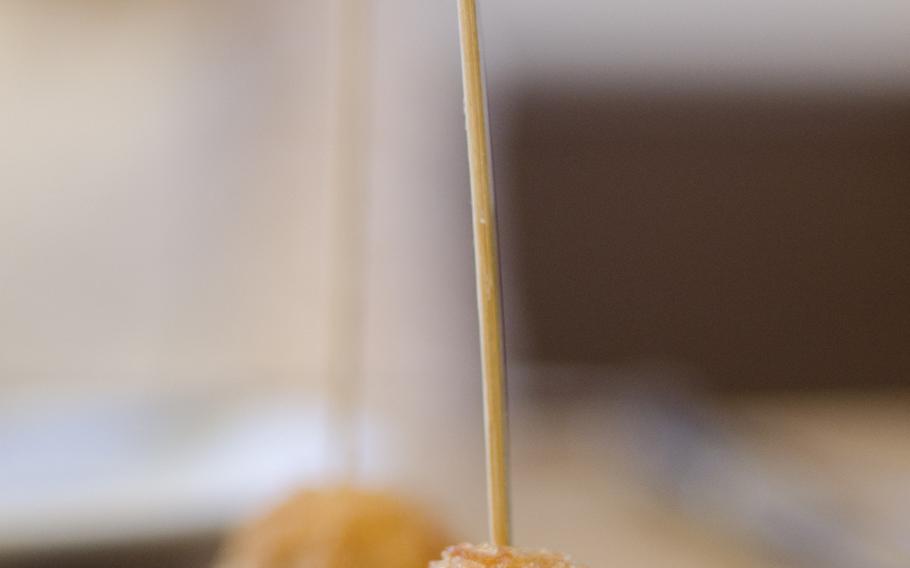 Lamb croquets were given away to diners at Rhubarb in Newmarket, England, recently, along with complementary rolls. (Adam L. Mathis/Stars and Stripes) 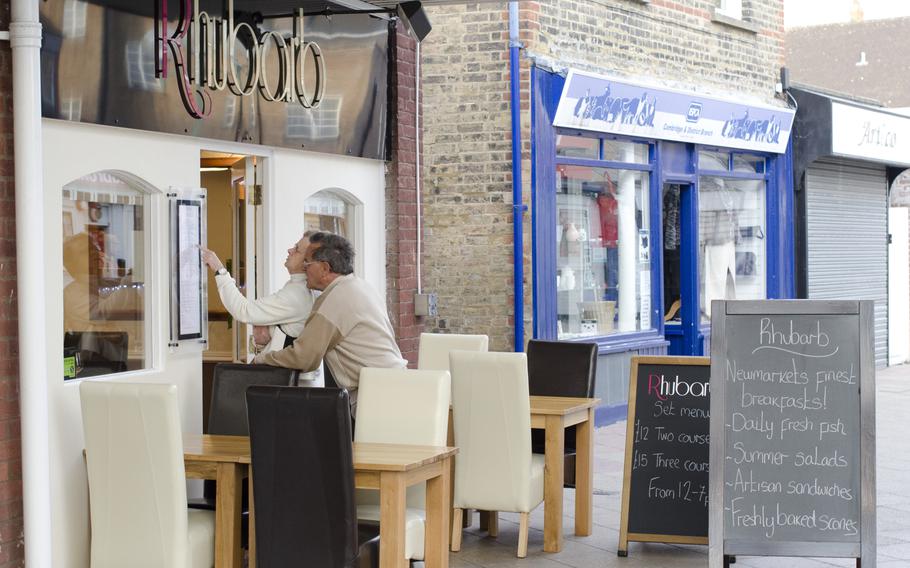 Potential diners look at the menu for Rhubarb, a restaurant in the shopping area of Newmarket, England. (Adam L. Mathis/Stars and Stripes) 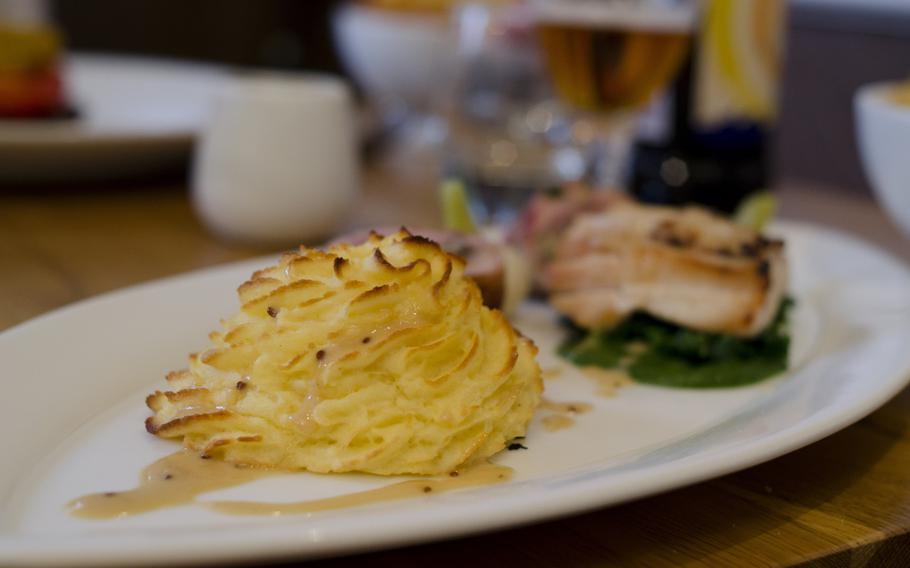 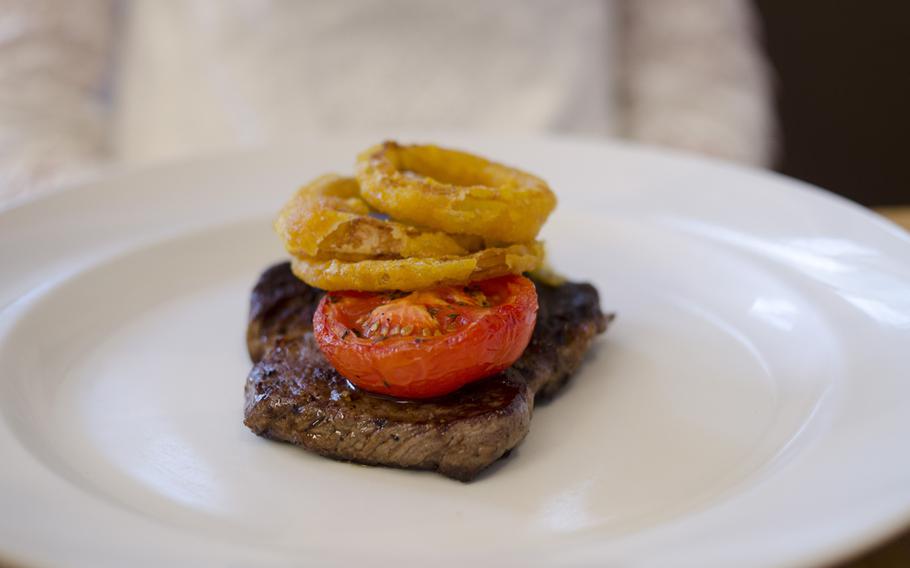 Steak is topped with onion rings, tomato and a mushroom at Rhubarb in Newmarket, England. (Adam L. Mathis/Stars and Stripes) 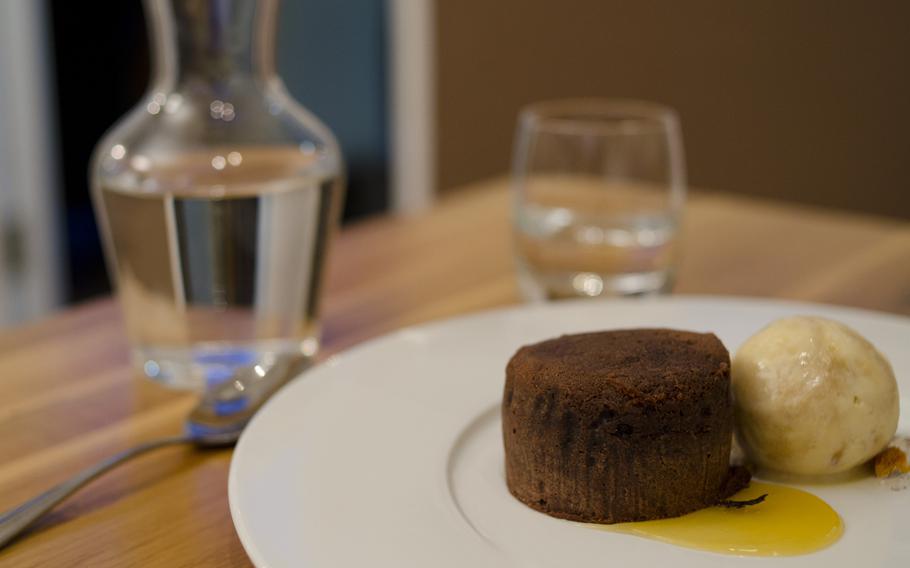 A chocolate cake filled with liquid chocolate and flavored with orange and accompanied by ice cream is one of several desserts offered by Rhubarb in Newmarket, England. (Adam L. Mathis/Stars and Stripes)

The lamb croquettes were unexpected.

Served on a piece of black slate, the two balls of battered lamb nestled in piles of onion came not long after the complimentary rolls. My wife and I had not ordered them, but they were another part of Rhubarb’s focus on service and presentation.

Rhubarb is a relatively new edition to dining options in Newmarket, England, and one that is easily missed. The restaurant has only about 10 tables, and its narrow storefront on the edge of The Guineas Shopping Centre does not draw attention. The wider, glass storefronts of a fish-and-chips place and the Pantry Fine Food Shop and Eatery command the eye.

Inside, however, presentation is paramount. The chicken entree (13 British pounds, or about $20) comes with the breast chopped into very manageable slices on top of watercress puree and drizzled with mustard sauce. The chicken, which the restaurant boasts as locally sourced, was juicy and firm, with the occasional bit of cooked crispness on the edge. The sauce was tasty, but far too sparingly applied.

The 8-ounce steak (17 British pounds) is simple and comes with all of the staples expected on the English menu: onion rings, a portion of tomato, a large mushroom and plenty of fries. The peppercorn sauce that came with the steak was spicy with a sour finish when sampled alone and complemented the steak perfectly — and just about anything else you chose to dip in it.

The most interesting dessert on the menu is the “hot chocolate orange fondant with BBQ orange puree and honeycomb ice cream” for 6 British pounds. This translates on the plate to a small cake that gushes with liquid chocolate, which has a hint of orange in it.

Split this with someone, as I did with my wife, and its life on the table will not even reach five minutes.

RhubarbLocation: On the edge of The Guineas Shopping Centre not far from Newmarket’s High Street. The center has parking, free after 4 p.m.

Dress: Rhubarb does not publish a dress code, but it has a formal atmosphere. Dress as though you are going to work.

Cost: Expect to spend 13 British pounds (about $20) or more for an entree. Most desserts cost 6 pounds.