Quick Trips: Paestum is a study in diversity 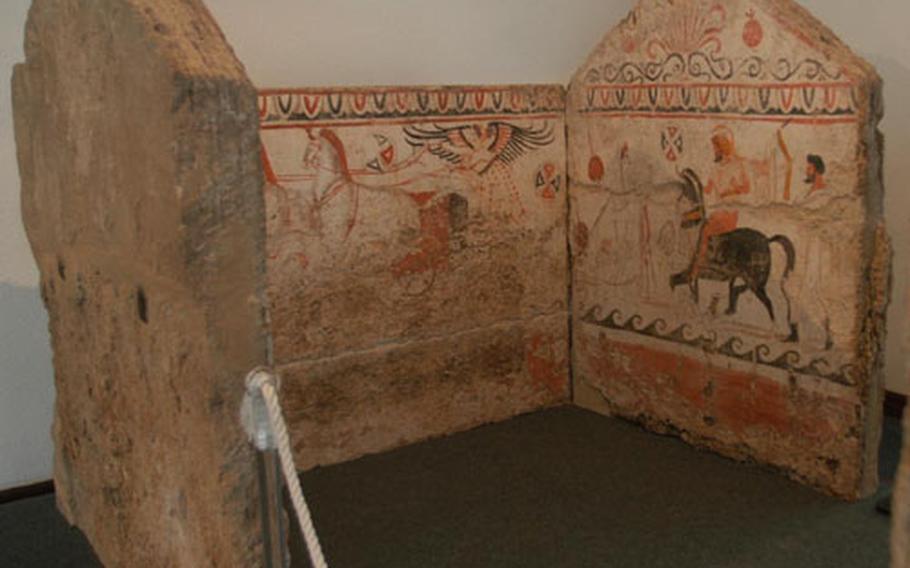 About a dozen frescoed burial crypts can be seen in the Paestum museum. Archaeologists in the area have found Greek, Roman and Etruscan tombs. (Jason Chudy / S&S)

About a dozen frescoed burial crypts can be seen in the Paestum museum. Archaeologists in the area have found Greek, Roman and Etruscan tombs. (Jason Chudy / S&S) 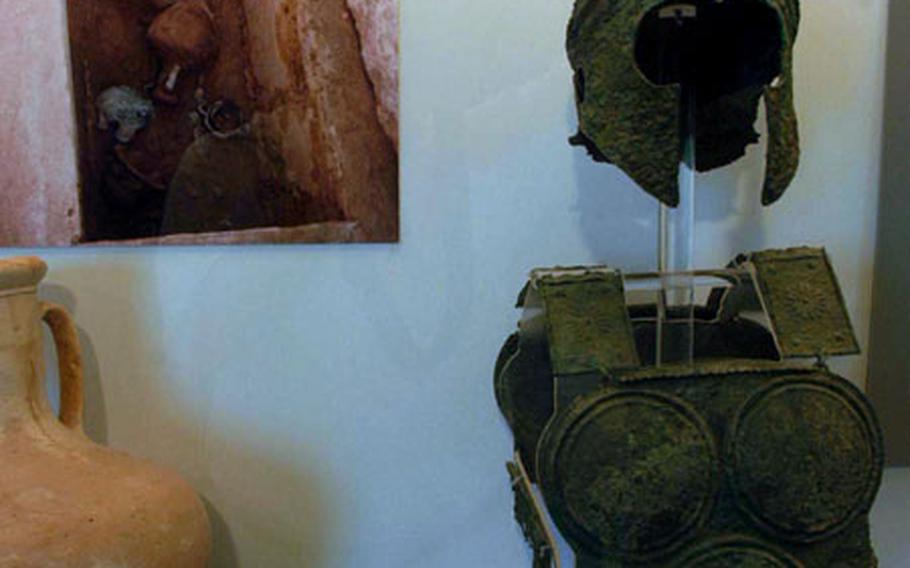 Displays at the Paestum museum range from bronze urns to burial crypts to a Greek warrior&#39;s armor. (Jason Chudy / S&S) 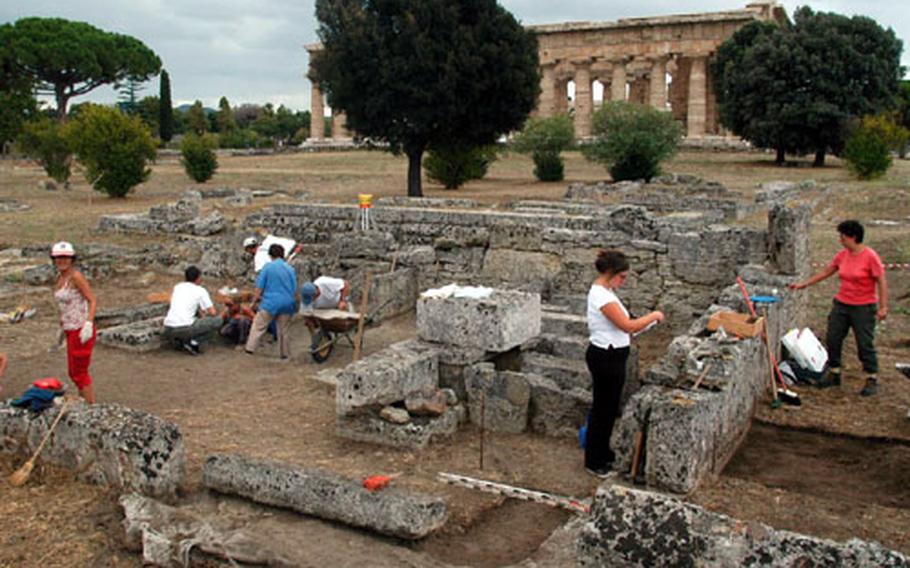 Archaeological work continues on the Paestum site. Of the half-dozen or so acres inside the Greek walls, only a few have been excavated. Marshes once covered the area and researchers, preserving much of the site. (Jason Chudy / S&S) 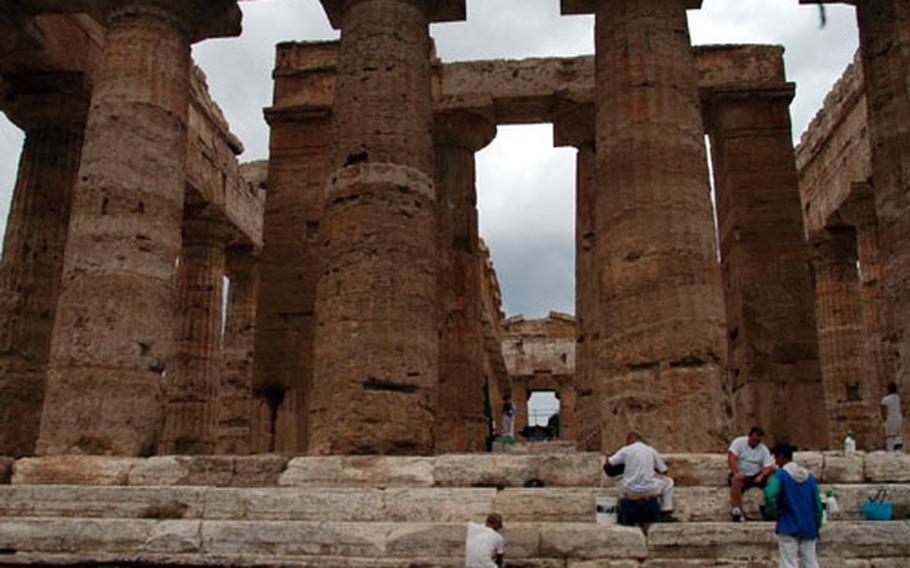 Columns of the Temple of Neptune seem to dwarf archaeologists as they work on the temple&#39;s base. (Jason Chudy / S&S)

In just a few small acres of land on the Salerno plain south of Naples is an area that holds a historic diversity probably unmatched anywhere in Europe.

During its nearly 3,000-year history, the land has been home to three Greek temples, a Roman town, and even an American World War II battlefield hospital.

Today much of that history still stands, bearing witness to the importance of the coastal location of the town of Paestum.

The Greeks founded the area in about 700 B.C., calling it Poseidonia. The town&#8217;s walls, which encompass about a half-dozen acres, still remain pretty much intact. One of the original guard towers has been rebuilt along one of the eastern walls.

During their few hundred years in control of the site, the Greeks built three Doric temples, which today remain some of the best-preserved temples in the world.

Once the Greeks left, the Romans moved in and built a Roman city between the temples. They named the town Paestum.

The remains of the city are preserved because of the marshy nature of the land, which after the fall of the Roman Empire, covered the area in a few feet of mud.

Most of the buildings were originally two stories tall, but subsequent residents of the area took much of the material for construction of their own homes, leaving the few bottom feet of the buildings.

Archaeologists are still digging the dirt from parts of the cities. What remains, however, is a good outline of the city, complete with roads that in some places show ruts from the wheels of Roman chariots. Intricately detailed tiled floors arestill can be seen in some buildings.

Signs at some of the more important buildings, including the temples, give visitors an idea of how the city was constructed and laid out, and a little history of the specific sites.

Across the road from the temples and city is the Paestum museum. Artifacts from the site, along with some from the surrounding area, are housed here.

Pottery and bronzeware have been found in the area, and one display has a container of 2,500-year-old honey, which was found preserved in a sealed bronze container at the site.

Also on display are burial crypts and frescoes, including the well-preserved &#8220;Tomb of the Greek Diver.&#8221;

Directions: Paestum is about 60 miles southeast of Naples on the Salerno plain. From Capodichino or Gricignano, take autostrada A1 past Salerno to Battipaglia. Exit and take route SS 18 south to the Paestum off ramp. There are signs in Battipaglia showing directions to Paestum.

The price of parking varies depending on which lot is used. The one closest to the gate is 2.50 euros.

Times: Open daily at 9 a.m., the museum closes at 7 p.m. year-round and the archaeological site closes around sunset. If you visit in winter, plan to cover the temples and town first, and visit the museum last.

Food: There are plenty of restaurants and bars at the site entrance serving everything from ice cream to full dinners.

More info: Most signs at the site and in the museum are in Italian and English. Guidebooks are available at the museum bookstore, and many of the local souvenir shops also have books about the site. More information can be found on the Web at: http://www.paestum.org/vacanza_e_cultura/storia_eng.htm.