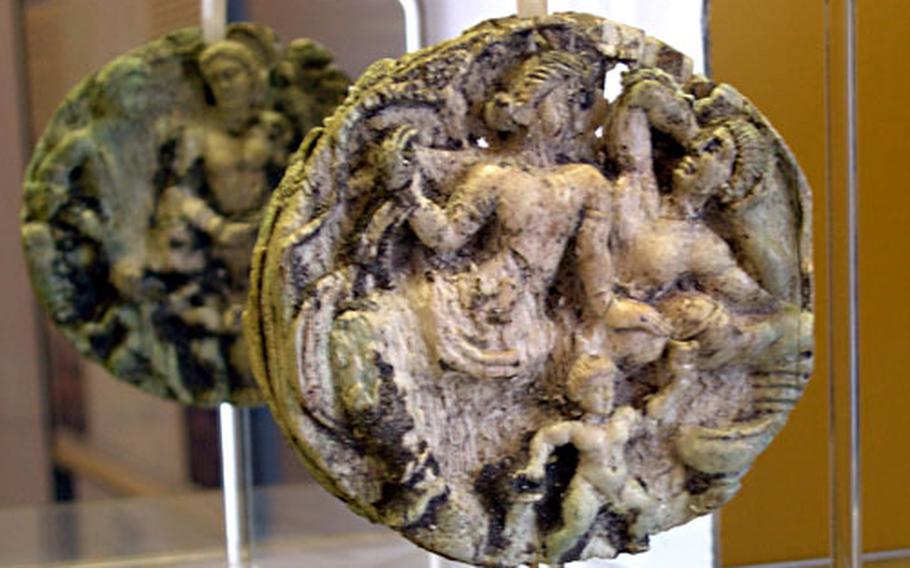 The back side of this ornamental disk is reflected in a mirror. The disk is one of the few hundred items at the Museo Archeologico dell&#39;Agro Atellano in Succivo, north of Naples. (Jason Chudy / S&S)

The back side of this ornamental disk is reflected in a mirror. The disk is one of the few hundred items at the Museo Archeologico dell&#39;Agro Atellano in Succivo, north of Naples. (Jason Chudy / S&S) 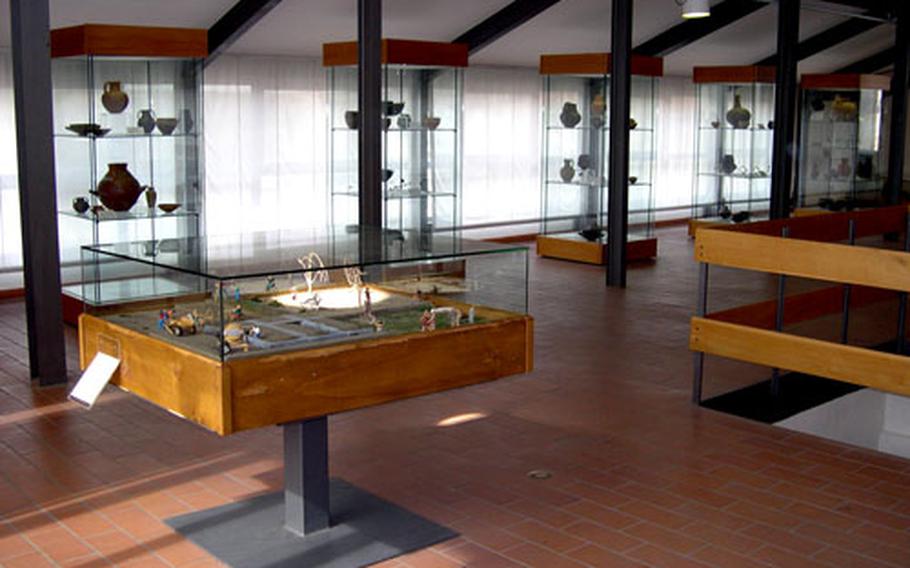 The second floor of the museum is where dozens of items found on the Gricignano support site housing area are displayed. (Jason Chudy / S&S) 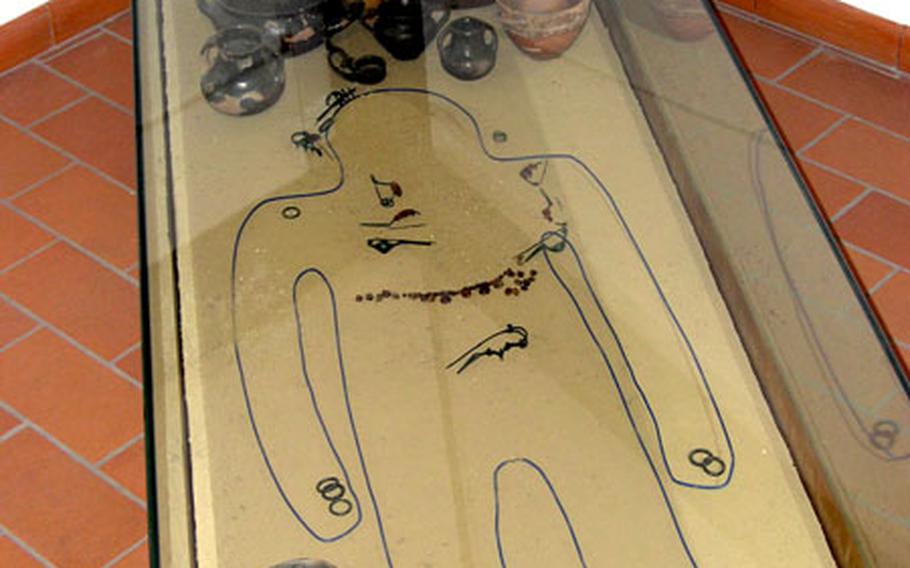 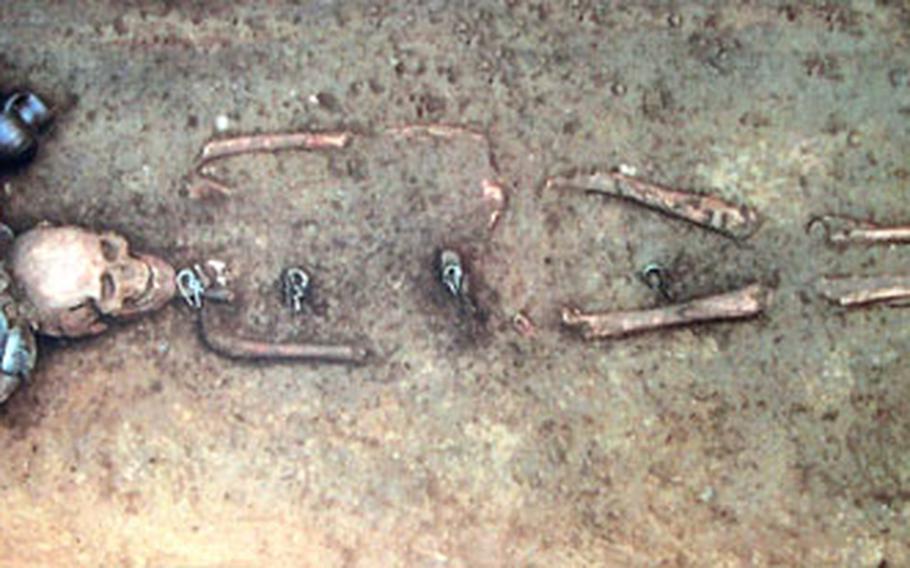 A photograph of a skeleton lying in one of the burial chambers found on the Gricignano support site. The photograph is on one of the display boards in the exhibit showing items found at the Navy housing area. (Jason Chudy / S&S)

The Museo Archeologico dell&#8217;Agro Atellano in Succivo is almost in the back yard of the Gricignano housing area at Naval Support Activity Naples. And many of the exhibits at the museum literally came from its back yard. About half of the few hundred items on display came from archaeological digs on the support site, which started in the mid-1990s before construction began on the housing units.

The museum is in Succivo&#8217;s downtown area, and despite being housed in a small, nondescript building, is relatively easy to find in the town&#8217;s center.

The building started out in 1878 as the town jail, then served as home to the local carabinieri detachment from the 1930s until the late 1970s. It did not open as a museum until 2002.

Not much larger than a good-size American house, the museum houses exhibits on its top two floors, with the ground level holding administrative offices.

The exhibits will never rival those in the Naples archaeological museum, and since all the signs and the museum guide &#8212; which we received only after our visit &#8212; are in Italian, it&#8217;s hard to completely understand the significance of the items displayed.

But with a good number of maps and photographs, and many references to the U.S. Navy, the exhibits give visitors from the base a little appreciation for Italy&#8217;s desire to catalog and display its local heritage. And, for a support site resident, it should also give a little better understanding of why many of the construction projects ended up taking so long to complete.

The first floor includes many finds from the surrounding communities, ranging from a small brick oven that looks much like a miniature version of today&#8217;s Italian pizza oven, to the ever-present pottery.

The second floor has about 100 items, all found at the support site. The exhibits are well lit and laid out over about 300 square feet. There&#8217;s plenty of room for detailed examinations of the exhibits, which are housed in tall, glass display cases.

The glass cases and their locations in the largely open space give visitors 360-degree views of all the display items. Most items are small, and some even have magnifying glasses in front of them to show the detailed carvings on the pieces.

Particularly interesting is the display showing a diagram of the location of a handful of burial chambers found on the support site. One chamber is re-created on the other side of the room: a rope outline of a human figure lies with jewelry and pottery placed in relation to where it was found on the remains.

More archaeological work is currently taking place at the support site, and if anything new is found, there&#8217;s more than enough room in the exhibition area for new pieces.

Since museum admission is free, it will be worth checking in every once in a while to see if anything new has turned up.

DIRECTIONS: The Museo Archeologico dell&#8217;Agro Atellano is in Succivo, the town just east of Gricignano di Aversa, home to the Naval Support Activity Naples housing area. Succivo is one exit east of the Gricignano exit on the the &#8220;SS-7 bis Superstrada&#8221; roadway. Follow signs for the town center, then follow the brown museum signs. The museum is on Via Roma, about 100 yards east of the town&#8217;s church.

COSTS: Admission is free, as is street parking.

FOOD: There&#8217;s no food available at the museum, but there are plenty of small shops, coffee bars and a handful of restaurants in the area. Since the museum is only 10 minutes from the Gricignano support site housing area, military identification card holders can eat at TGI Friday&#8217;s or even go home for lunch.

INFORMATION: All information about, and at, the museum is in Italian, including the town&#8217;s museum Web site. The museum staff has a short, Italian guidebook available; ask for the &#8220;guida breve&#8221; when you enter.