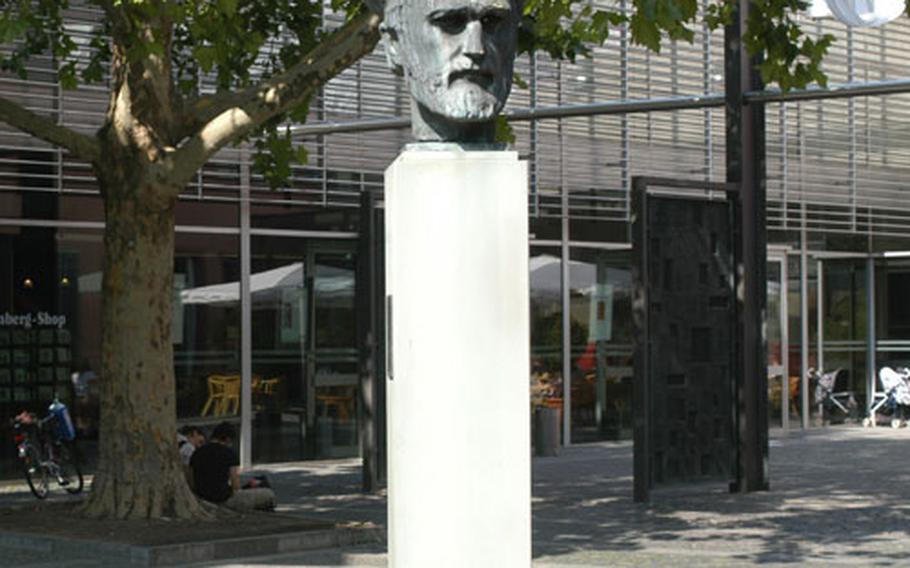 A statue of Johannes Gutenberg — who invented revolutionary printing techniques — outside the Gutenberg Museum in Mainz. (Marni McEntee / S&S)

A statue of Johannes Gutenberg — who invented revolutionary printing techniques — outside the Gutenberg Museum in Mainz. (Marni McEntee / S&S) 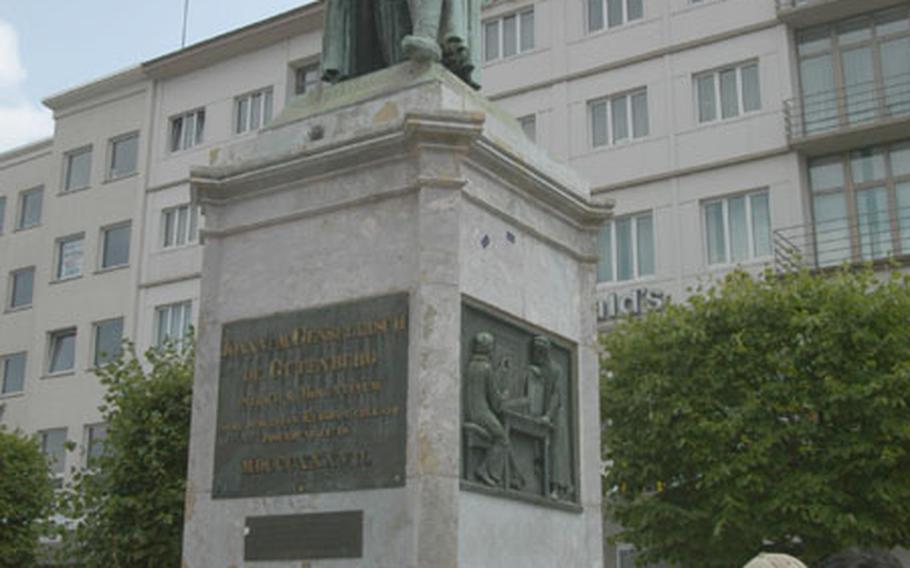 A statue of Johannes Gutenberg looks down on a pedestrian area in Mainz, not far from the museum bearing the master printer&#39;s name. (Marni McEntee / S&S) 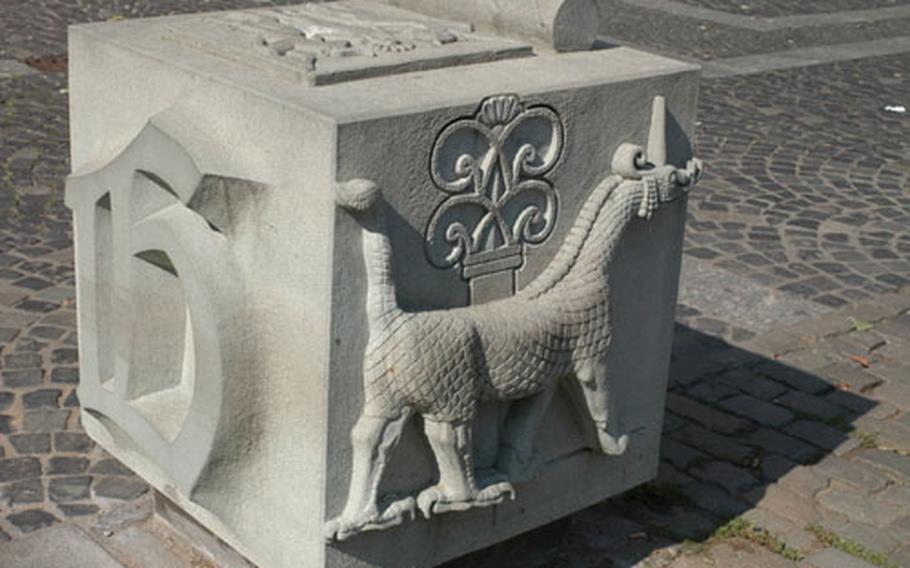 Stone blocks outside the Gutenberg Museum in Mainz are carved to look like the moveable type Johannes Gutenberg invented in the 15th century — a process that revolutionized printing techniques. (Marni McEntee / S&S) 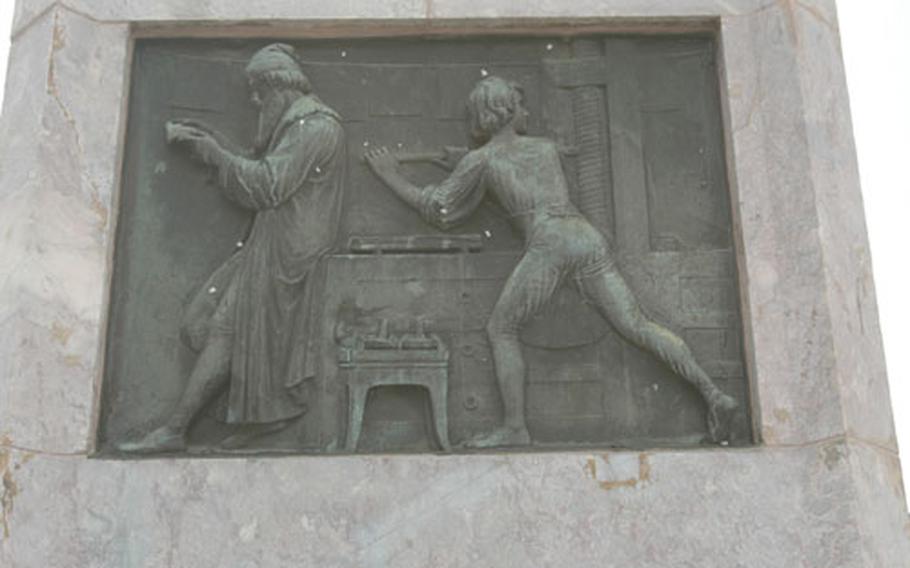 Detail work on the pedestal of a statue of Johannes Gutenberg shows a worker using a printing press while Gutenberg looks over the results. (Marni McEntee / S&S) 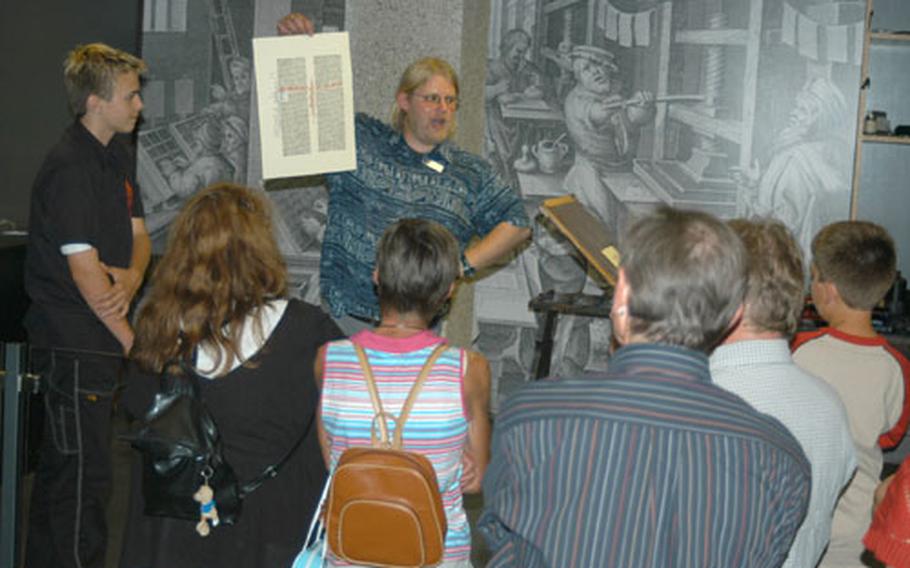 A tour guide shows a page he made in a printing press like the one Johannes Gutenberg used in the 15th century to advance printing techniques. Gutenberg&#39;s workshop is recreated in the Gutenberg Museum in Mainz. (Marni McEntee / S&S)

Curling up with a good book takes on new meaning after a visit to the Gutenberg Museum in Mainz, Germany.

For it is Johannes Gutenberg who gets credit for inventing the moveable type that allowed for mass production of reading materials. Without him, there would not have been the first mass-produced series of the real Good Book, the Gutenberg Bible, or any other number of revolutionary educational and religious texts.

Before Gutenberg began perfecting the printing process, starting in roughly 1438, most books were handwritten by religious scholars and paid scribes and were seen and read by a privileged few.

At the Gutenberg Museum, located in Mainz&#39;s old town just across from the city&#39;s grand cathedral, visitors can see a re-creation of the original printing press that Gutenberg and his shop full of master printers used to ink words on the page.

Among the treasures at the museum are two copies of the Gutenberg Bible, sitting side-by-side in a dimly lit, well-fortified vault.

Gutenberg, who was born in Mainz circa 1400, probably started work on his printing project around 1438 while he lived in Strasbourg, France, according to a guidebook available at the museum. Although his invention was to start the widespread circulation of general knowledge via books, he swore his partners to secrecy as he perfected the printing process.

By about 1448, Gutenberg had returned to Mainz and opened at least one printing shop. The first printed materials bearing a date were produced in 1454, according to the guidebook. These were the Turkish calendar and his most significant work, the Gutenberg Bible.

Although printing with wooden blocks on paper was common in Europe before Gutenberg&#8217;s time, he went an important step further. He developed a system to reduce any text to its individual components &#8212; its letters, numbers and punctuation marks. The materials were reusable, saving time and space.

Printing was still a laborious process. Gutenberg&#39;s 42-line Bible (for the number of lines on each page), was printed between 1452 and 1455. It was made in a workshop holding up to six presses and employing as many as 20 craftsmen. He printed about 180 Bibles, in Latin, in his workshop during that period.

In addition to the Bibles, the museum holds a library full of other texts on subjects including natural history, pharmacology, history and astrology. Most are highlighted with the elaborate work of &#8220;illuminators,&#8221; who hand-colored many of the letters at the beginning of pages and paragraphs.

Some books include incredibly detailed drawings and artwork in vivid colors, such as an astrology book that has a moveable wheel to track a sun sign&#8217;s placement over time.

The museum also has an area where adults and children can try their hand at printing.

Other than the vaunted Bibles, the highlight of the museum is the tour through the printing process. The tours are offered only in German, so it&#8217;s good to bring a translator or study up on the process before watching the demonstration. Regardless of the language barrier, it&#8217;s fun to see a petite female guide try to work the screw press &#8212; only to have a burly man step in to help her pull the heavy lever and force the press down onto the paper.

Directions: The Gutenberg Museum is in the old town of Mainz, Germany. To reach the city from the Kaiserslautern area, take Autobahn 6 to Autobahn 63 north into Mainz and follow signs to the Altstadt. From the Frankfurt area and east, take Autobahn 3 to Autobahn 66 and then cross the Rhine River at the intersection with Autobahn 643 near Wiesbaden. The museum is at Liebfrauenplatz 5, near the cathedral. Park in a garage or surface lot, and follow directional signs that point the way to the museum.

Cost: Tickets are 3.50 euros for adults; 1.50 euros for children ages 8-15; 2 euros for students and seniors older than 63. Children younger than 7 are admitted free.

Food: There is no cafeteria in the museum, but numerous restaurants, caf&#233;s and bars that serve a full range of food and drink are available in the old town.

More Information: Few of the exhibits have descriptions in English, so for those who cannot read German, it is essential to buy the English guidebook, available for 4 euros at the admission counter. The guide has descriptions of Gutenberg&#8217;s life and the history of printing. Give it a good read before entering the exhibits to better understand what you are seeing. A separate four-page guide is available for 30 euro cents, including a question-and- answer section for kids. The museum has a German-language Web site at: www.gutenberg.de. The site&#8217;s English translation link was &#8220;in progress&#8221; when last checked.