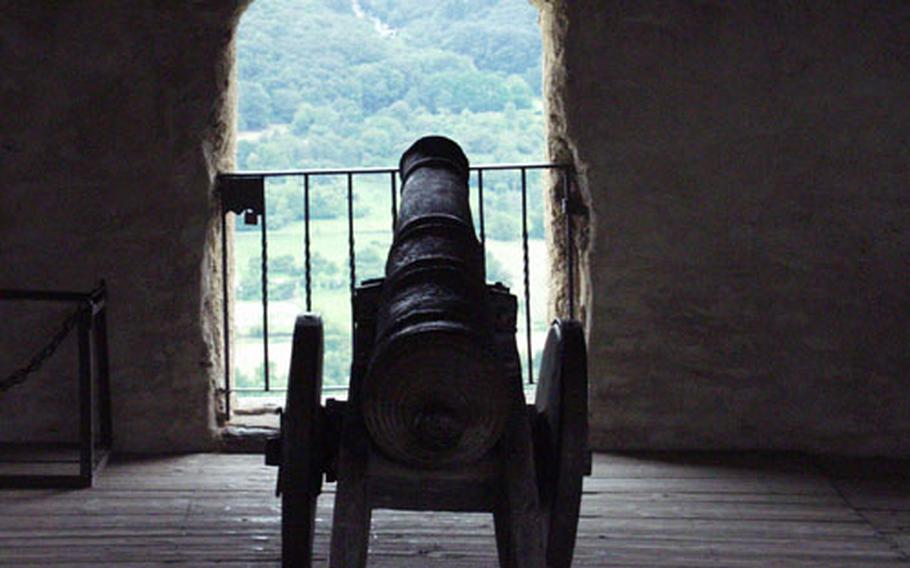 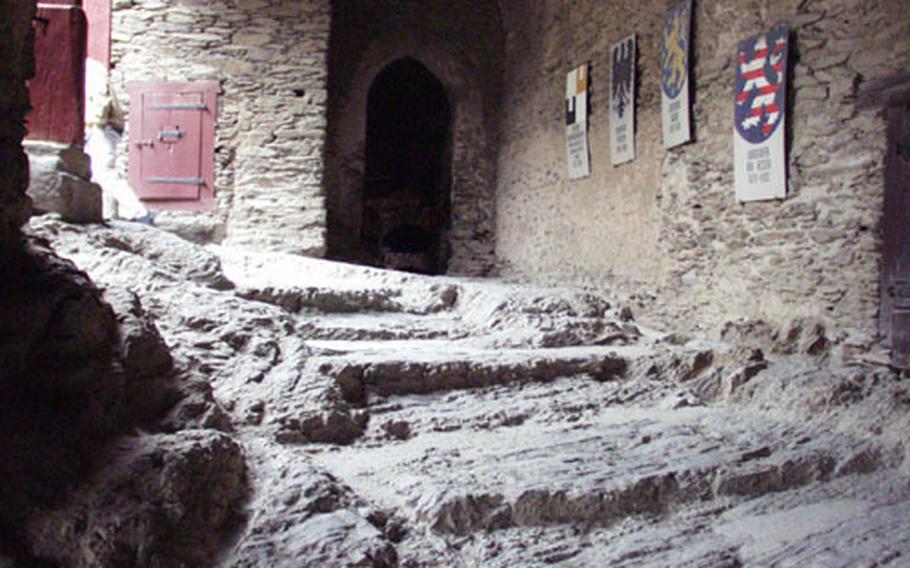 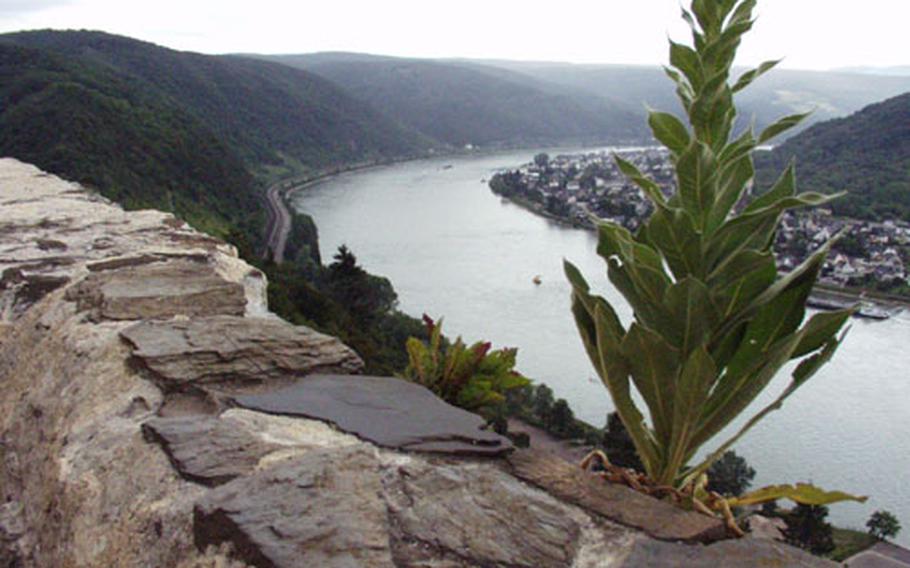 The town of Hirzenauch hugs the west bank of the Rhine River beneath the ramparts of Marksburg Castle. (Rusty Bryan / S&S) 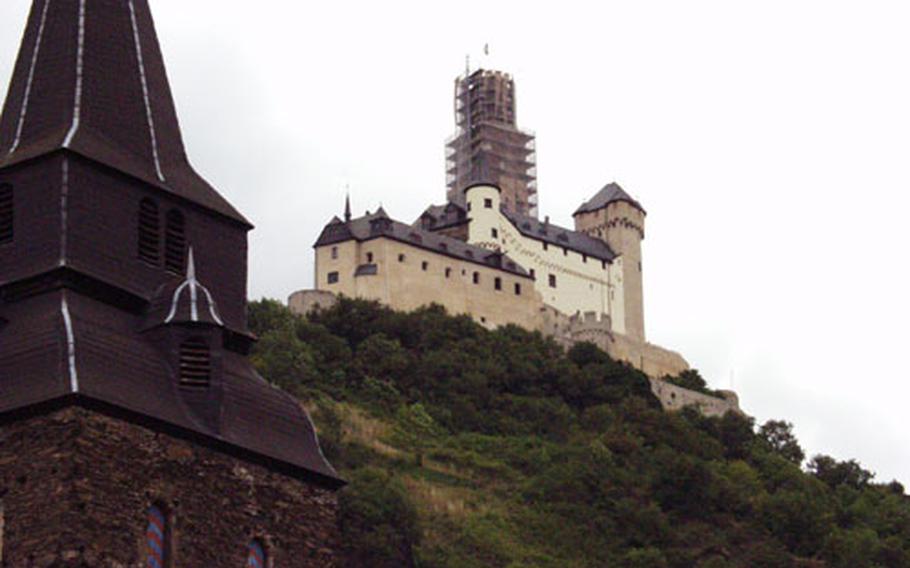 Even wearing its cocoon of scaffolding, Marksburg Castle&#39;s distincitive wedding-cake keep towers over the Rhine Valley town of Braubach and its "Obertor" (left). (Rusty Bryan / S&S)

Of the numerous castles whose jagged profiles mark the mountainsides along the Rhine north of Wiesbaden and Mainz, there is only one that was never destroyed.

Marksburg Castle, towering above the village of Braubach on the east side of the river, has endured nearly 800 years of change and turmoil without seeing its ponderous stones burned, blasted or razed. Its link to its past is uninterrupted.

The reason Marksburg never suffered the fate of its neighbors is its location. It sits atop a steep, isolated hill on a bend in the river. In the past, the formidable terrain so discouraged enemies that the castle, begun in the 11th century but not finished until 1231, was never attacked during the countless wars that raged around it throughout the centuries.

Today, tourists attacking the Marksburg face either a tough 25-minute ascent via a footpath from the parking lot at the foot of the mountain, or 119 breath-sapping steps leading from a parking lot three-fourths of the way up the hill at the end of a one-lane road.

The climb is more than worth it. Fifty-minute tours take visitors through the ramparts and into the still-furnished living quarters of the old palace. While the tours are conducted in German, most of the guides speak English. In addition, English- speaking visitors are given a free brochure describing the sights on the tour, and English tours can be arranged for groups of 20 or more with advance notice.

The tour begins with, of course, another climb. This one is up the castle&#8217;s Rider&#8217;s Stairway, hewn from the rock of the mountain. The stairway leads into the castle&#8217;s courtyard, where a 17th-century artillery battery, supplemented by a gun built in 1450, still targets the valley below.

From the courtyard, the tour winds along the ramparts and a medieval herb and vegetable garden bordering them to the entrance to the palace.

While the present shoring-up of the Marksburg&#8217;s main keep progresses, the first stop is a bed chamber furnished with a canopied bed, spinning wheel and cradle. Next up are the main banquet hall, still ready for revelers with its large table, huge fireplace and strangely prominent, at least to modern eyes, toilet cubicle. Then it is on to the castle chapel, decorated with religious frescoes.

From the chapel, the tour ascends a narrow passage inside the walls to the armory, which features mannequins clad in battle dress from Grecian times through the Renaissance. In the armory, visitors can try on a heavy medieval battle helmet.

From the steel battle pot, the tour turns its attention to peaceful pots and pans as it winds through the fully equipped kitchen &#8212; with a fireplace large enough for a whole ox and a stone cold-storage cabinet &#8212; to the wine cellar. The tour concludes in what were once the stables, where a large display of torture equipment fills the former stalls and provides a grim counterbalance to the romantic visions of medieval life provided by the rest of the Marksburg.

For its old age, the Marksburg holds a lot of life. It houses the offices of the German Castles Association, and its banquet hall and kitchen are available for &#8220;Knight&#8217;s Table&#8221; parties, with food cooked in authentic style and served by waiters in costume while minstrels and a bard entertain.

Directions: Marksburg Castle is above the town of Braubach, on the east bank of the Rhine, about 30 miles north of the tourist center of R&#252;desheim. From Wiesbaden, drive west on A-66, following signs toward Eltville and R&#252;desheim. After passing through R&#252;desheim, take B-42 along the river until reaching Braubach, about two hours from Wiesbaden in flowing traffic.

Costs: Tickets are 4.50 euros for adults, 4 euros for students and 3.50 for children. Family tickets for two adults and two or more children are 12.50 euros. Groups of 20 or more receive a discount of 50 euro cents per ticket.

Food: The castle has a terrace snack bar serving wurst platters, pasta, desserts and ice cream. It offers tables with a superb view of the Rhine Valley. In the towns below are food establishments of all types.

More information: Find directions, photographs and history in English at www.marksburg.de/english/frame.htm. Phone: (+49) (0) 2627-206. Guided tours in English are available for groups of 20 or more with notice.