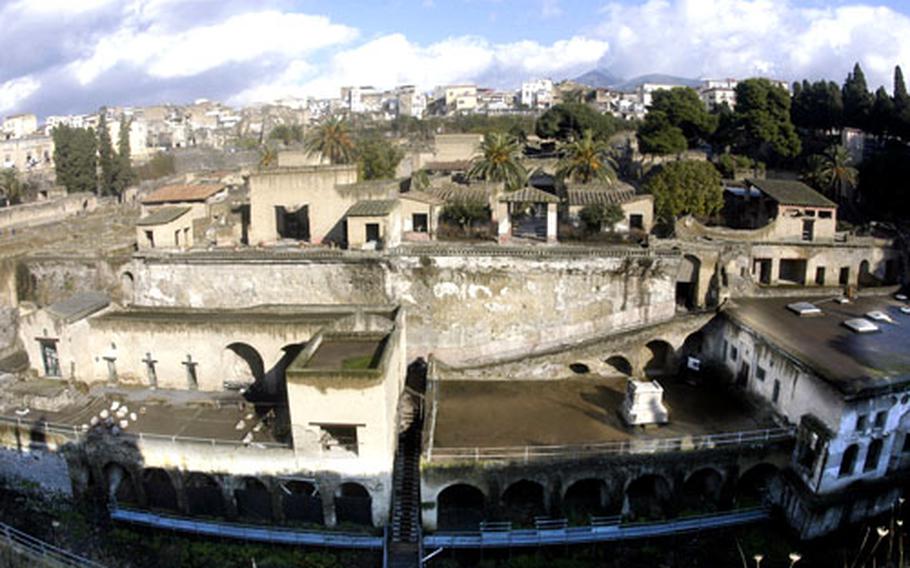 Herculaneum was a beachfront community during Roman times, but is now about a mile inland. Mount Vesuvius, usually visible in the background, is barely visible in the clouds in upper right. (Jason Chudy / S&S)

Herculaneum was a beachfront community during Roman times, but is now about a mile inland. Mount Vesuvius, usually visible in the background, is barely visible in the clouds in upper right. (Jason Chudy / S&S) 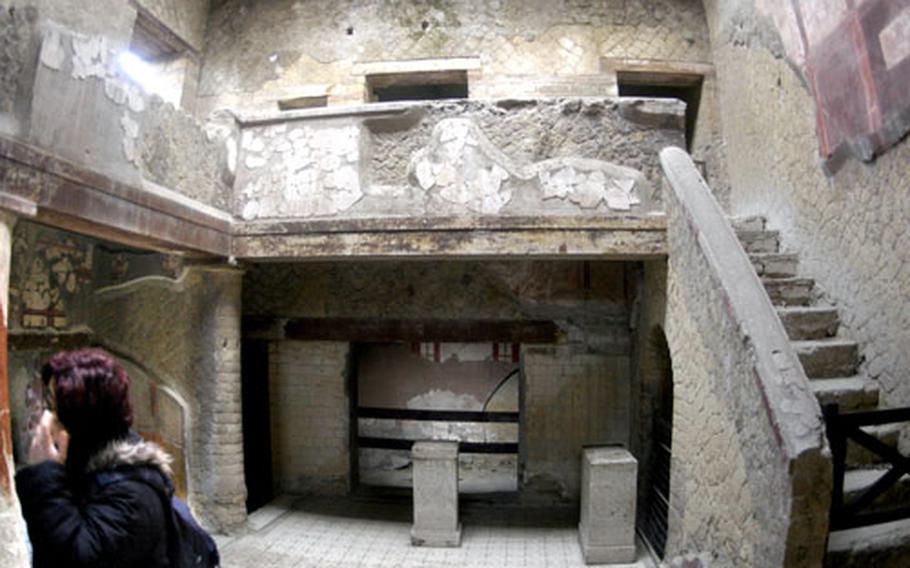 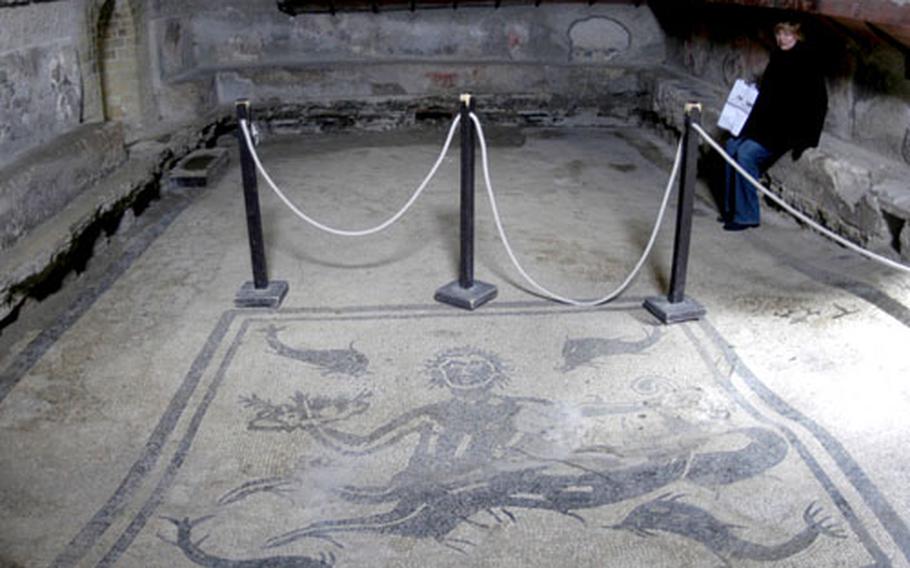 Detailed mosaics on the floor and other well-preserved fixtures in the room give visitors a unique look at a Roman bath in Herculaneum. (Jason Chudy / S&S) 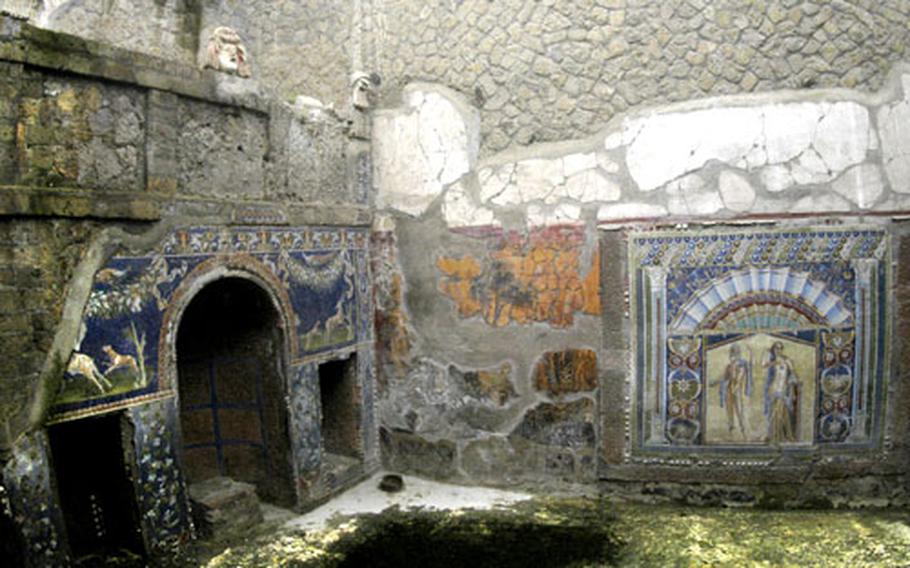 Art in the House of Neptune and Amphitrite is still bright after nearly 2,000 years. (Jason Chudy / S&S) 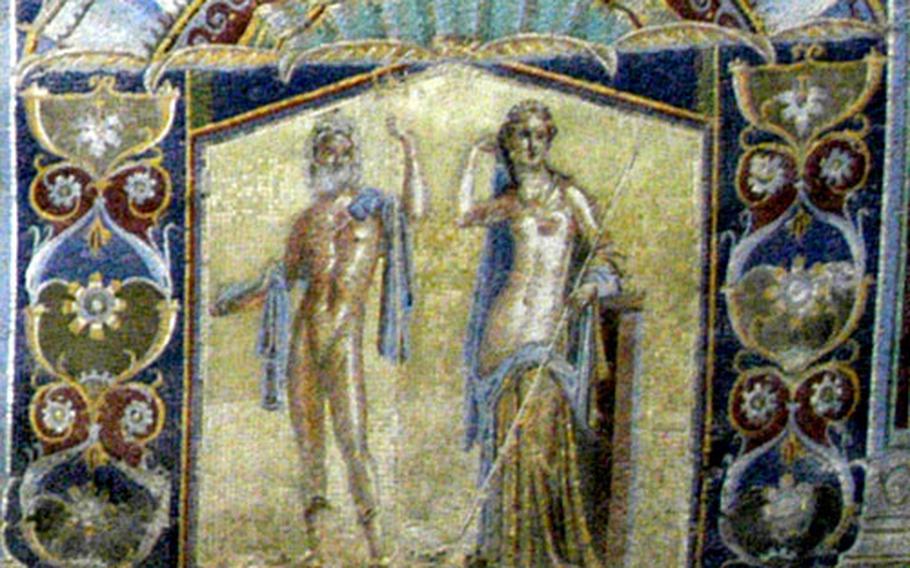 A closer look at artwork adorning a wall in the House of Neptune and Amphitrite. (Jason Chudy / S&S)

The archaeological digs at Herculaneum are always overshadowed by the bigger &#8212; and better known &#8212; Pompeii.

And both digs, along the east end of Italy&#8217;s Bay of Naples, literally sit in the shadow of Mount Vesuvius, which on Aug. 24, A.D. 79, erupted and sent hot gas, rock and ash down on the two cities, destroying those who lived there but preserving both sites for history.

Despite these two big shadows, Herculaneum, which is named after Hercules, is well deserving of a visit, even by those enthralled by sprawling Pompeii.

The site, which is amid the buildings of the modern town of Ercolano &#8212; Italian for Herculaneum &#8212; is considered the better preserved of the two and has yielded important artifacts relating to life in Roman times.

While it seems natural that the stone and marble structures would survive being buried for more than 1,700 years &#8212; the first digs at the site began in 1738 &#8212; it is surprising that some items made from wood, papyrus and vegetable fibers also survived.

Papyrus scrolls recovered from the site have been studied at the National Library in Naples, and pieces of the original wooden construction material still remain in some buildings.

Herculaneum and Pompeii are both on the U.N. Educational, Scientific and Cultural Organization&#8217;s World Heritage List. Only 812 sites worldwide are listed, and Herculaneum and Pompeii were recognized for providing &#8220;a complete and vivid picture of society and daily life at a specific moment in the past that is without parallel anywhere in the world.&#8221;

Herculaneum is much smaller than Pompeii. The former seafront town, which now sits inland a mile or so, is only a few square acres, with an additional villa dug up to the north.

Pompeii, a few miles south, was a commercial town, while Herculaneum, according to UNESCO, was a holiday resort.

And the architecture and artistic remains of several villas show that opulence. Many frescoes remain, and a few villas have ornate mosaics, some so colorful and bright that they appear to be recent, rather than Roman.

The House of Neptune and Amphitrite, for example, was crowded with onlookers, who braved a cold winter drizzle during a recent visit. They were rewarded with one of the finest and most detailed mosaics at the site.

Down the street was the House of the Mosaic Atrium, which is aptly named.

Most of the buildings are at least two stories tall, with the second floors of a few accessible, having been rebuilt with new wooden floors.

The Casa Dei Cervi, which during Roman times overlooked the sea, has a simple courtyard design that is seen in many of the more modern Italian villas and palaces.

Walking through the villas and courtyards at Herculaneum is worth an afternoon in itself, but would have been better if the site&#8217;s museum were open.

The museum, which isn&#8217;t marked with a sign but is listed on the handout map that visitors receive, was surrounded by a small fence. There was no information on its closure at the entrance or on the map.

But despite this, Herculaneum will leave visitors with a sense of awe. In many ways, it&#8217;s spooky to walk the streets of this long-dead town, thinking that in literally moments hundreds of human lives were snuffed out by Mount Vesuvius, which today sits quietly a short distance away.

On the QTDIRECTIONS: Herculaneum is about a 20-minute drive from the Naval Support Activity Naples Capodichino base. From the Tangenziale, take the A3 Autostrada south to the Ercolano exit. Follow signs through town to the Scavi (excavations). Pay parking is available a few hundred yards from the main entrance at the town police station.

COSTS: Entrance is 10 euros. Parking at the nearby police station is 1 euro per hour.

FOOD: There are many restaurants, coffee bars and food stores in the area.

INFORMATION: A map available at the entrance gives basic information in English and Italian. For more information on Herculaneum and Pompeii, see: whc.unesco.org.