Sunbathers wanting to avoid the crowds on nearby Capri and Ischia seek out Procida’s dark-sand beaches, some of which are accessible only by sea. (Kendra Helmer / S&S)

Sunbathers wanting to avoid the crowds on nearby Capri and Ischia seek out Procida’s dark-sand beaches, some of which are accessible only by sea. (Kendra Helmer / S&S) 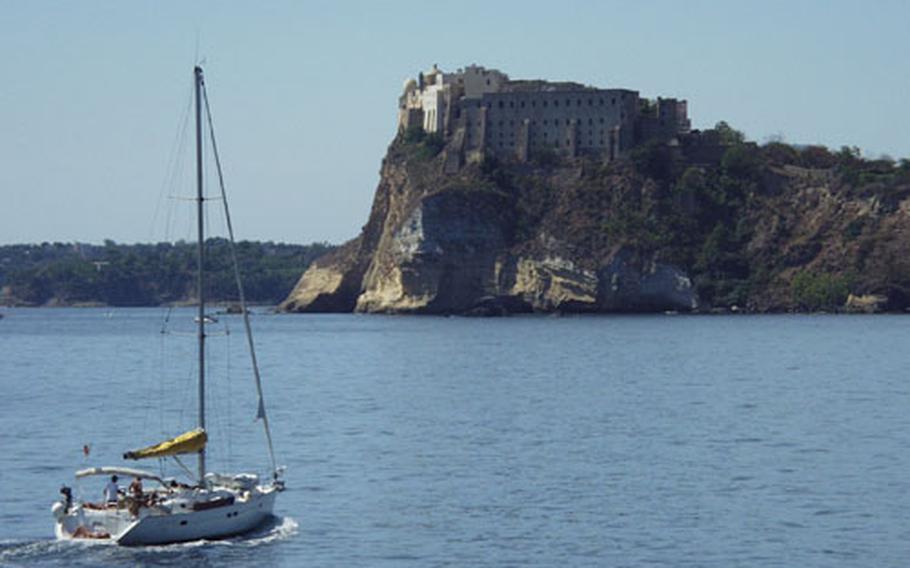 A boat sails past a former penitentiary and the Abbey of San Michele Arcangelo (on the upper left), the patron saint of Procida. The abbey has a small museum and catacombs that are open to the public. (Kendra Helmer / S&S) 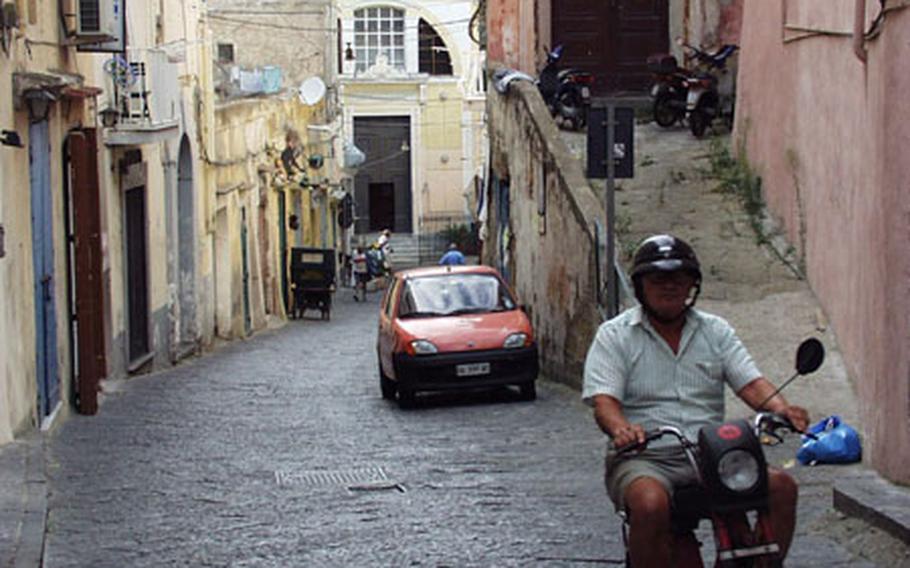 Take care exploring the island’s maze of alleyways and streets; walkers press themselves up against the buildings to avoid scooters and cars zipping around the corners. (Kendra Helmer / S&S) Fishermen mend their nets on the water’s edge at the Porto Marina Grande on Procida. (Kendra Helmer / S&S) 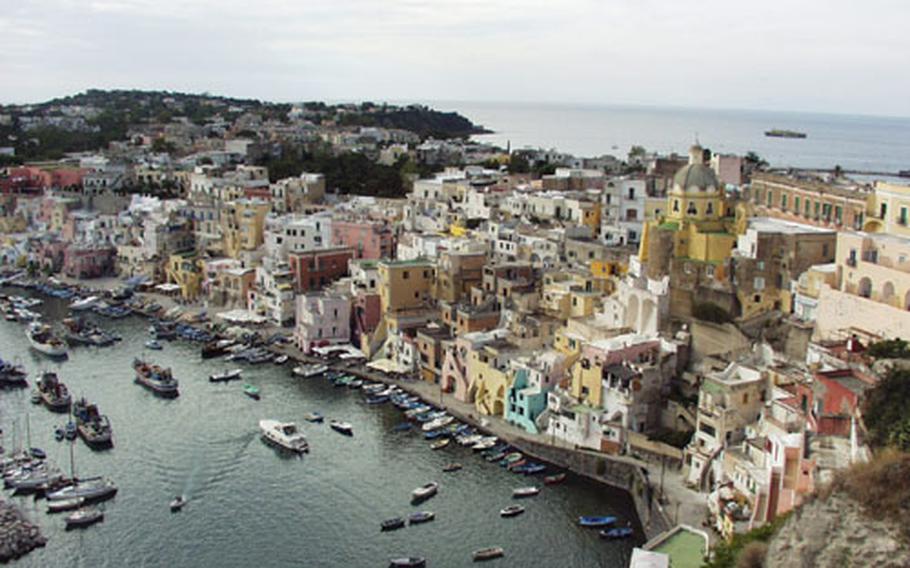 A visit to Marina Corricella, the main port for fishermen on Procida, is like a step back in time. No vehicles are allowed in this area, which has gardens filled with lemon trees. The various pastel houses have arches unique to the island’s architecture. (Kendra Helmer / S&S)

Procida&rsquo;s charm is evident upon arrival at Porta Marina Grande. Buildings of pink, blue, yellow and white are nestled together near boats hauling in fresh fish.

Most tourists overlook Procida and instead pack nearby Ischia and Capri. Those who do make the half-hour ferry trip are rewarded with deserted beaches and welcoming locals.

The island is easily explored on foot within a day. Take a break on the dark-sand beaches, the best of which reportedly is in Ciraccio.

Procida&rsquo;s highest point, 300 feet, is Terra Murata, an ancient cliff-side fort. From here visitors can visit the Abbazia San Michele Arcangelo, a half-mile uphill walk from Marina Grande. The abbey, named for the island&rsquo;s patron saint, has catacombs and a small museum.

Take care exploring the maze of walled alleyways and streets; scooters dash around corners. To escape the choking exhaust, head for Marina Corricella, where no vehicles are allowed. The village&rsquo;s pastel vaulted buildings, originally built as winter boat shelters, attest to Procida&rsquo;s unique architecture. Chatty locals lean out their windows framed by curious arches and half-arches.

For solitude, explore the Vivara nature reserve, on the other end of the island from Marina Grande. A tiny bridge connects the 80-acre island to the mainland.

Nearby, Marina Chiaiolella has delicious, affordable restaurants. After eating, you may be too stuffed to walk. Hire a boat to explore some beaches, coves, grottos and craters that are accessible only by sea.

Our decision to take a bus after lunch was a good call. The driver joked with giggling passengers who grasped the poles to keep from stumbling as he bumped along the cobbled streets. He greeted passing bicyclists &mdash; it seems on this island of 10,000 people that there aren&rsquo;t many strangers.

The islanders hold fast to traditions, selling delicate lace and embroidery, and participating in cultural events.

If you&rsquo;re enchanted by Procida, there are about a dozen hotels, cottages and camp sites.

Directions: Ferries and hydrofoils run from Pozzuoli, Ischia and Naples, between 30 and 45 minutes away. The boats run every 90 minutes to two hours &mdash; from as early as 4 a.m. to as late as 8 p.m., depending on the day of the week and time of the year.

A complete circumnavigation of the island takes about four hours by foot. Bikes and boats are available for hire.

Cost: A boat ride is 6 euros round-trip from Pozzuoli (children under 5 free). Parking at the port costs about 5 euros per day. Bus tickets are about a euro (buy on the bus). Microtaxis can be hired for a few hours for around 20 euros, depending on your bargaining ability.

Times: Hours for the Abbey of San Michele Arcangelo vary, depending on the time of year. It&rsquo;s generally open 9:45 a.m. to 12:45 p.m. and 3 to 5 p.m. daily. The nature reserve on the island of Vivara, linked to Procida by bridge, is open 8:30 a.m. to noon Monday through Saturday, last entry at 10 a.m.