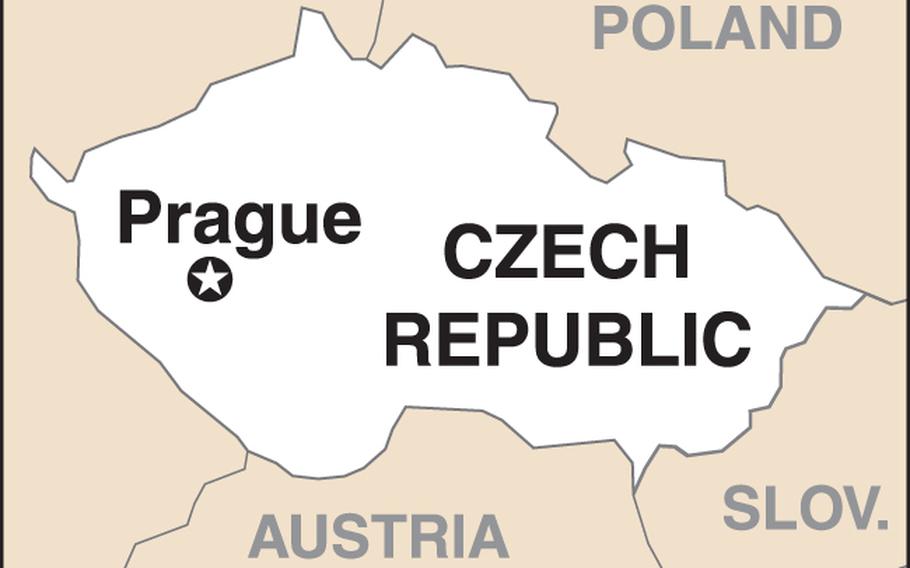 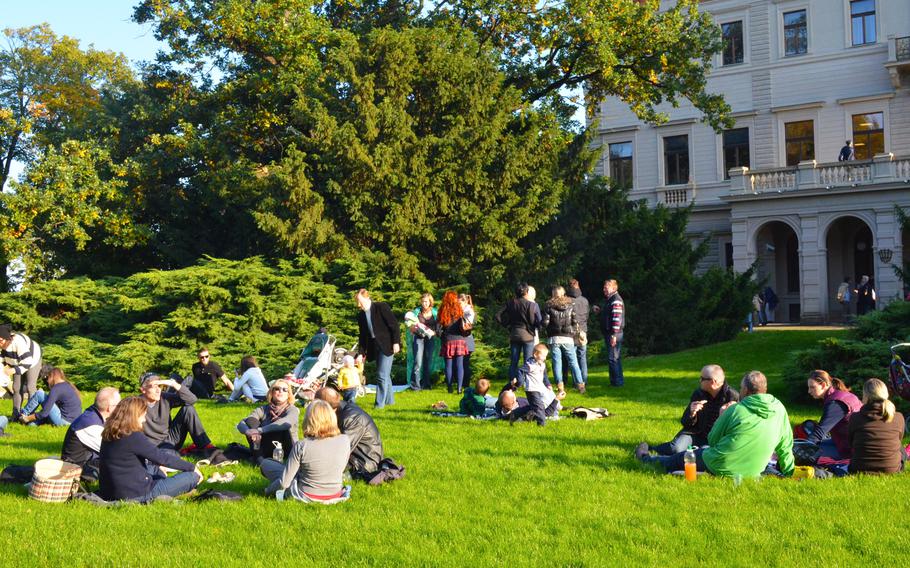 Festival goers enjoy the sun and the wine on the lawn outside the Grobe villa at the 2013 Vinobrani na Grebovce in Prague. (Courtesy of Vinobrani Na Grebovc) 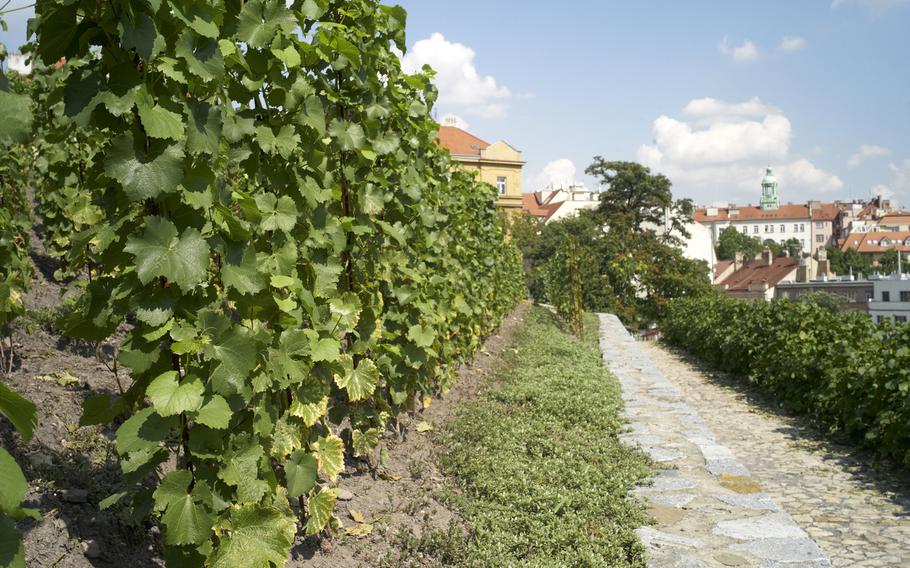 The Grebovka vineyards lie so close to the center of Prague that the city's buildings appear to be only a hop, skip and a jump away. (Michael Heitmann/Special to Stars and Stripes) 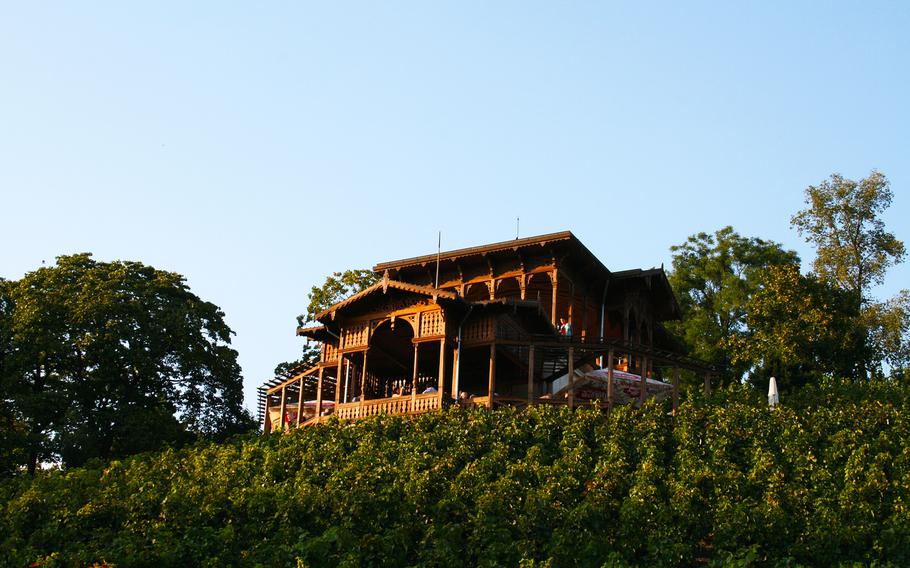 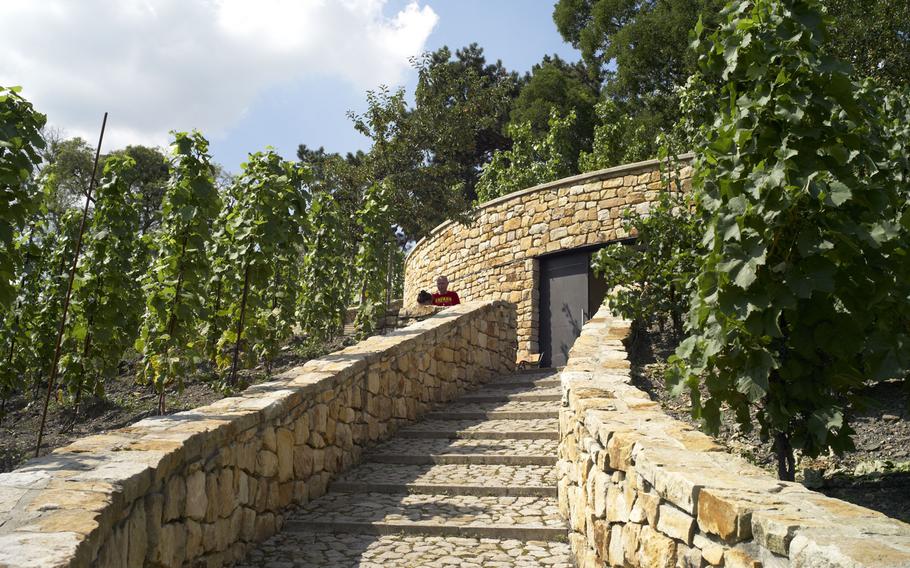 Stone steps leading to the wine celler cut through the lush, tranquil Grebovka vineyards, which lie near the center of Prague. (Michael Heitmann/Special to Star) 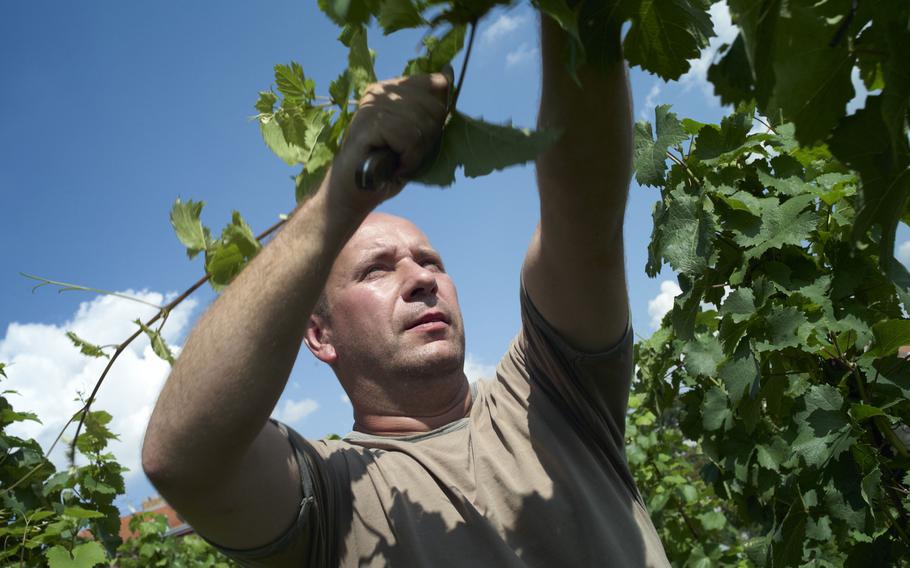 Pavel Bulanek tends the Grebovka vineyards, where he is the main cultivator. The vineyards cover nearly four acres near Prague's city center. (Michael Heitmann/Special to Stars and Stripes) 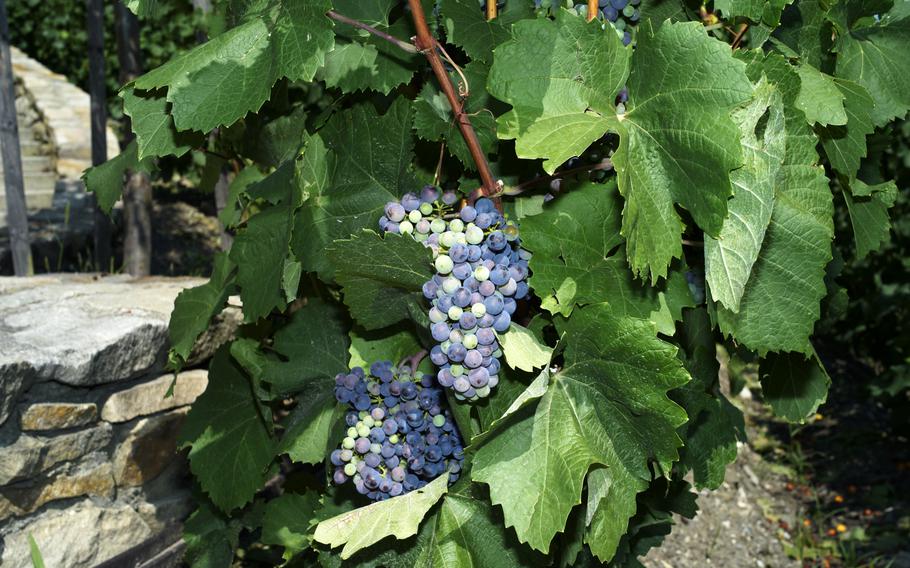 Plump grapes ripen on the vine at the Grebovka vineyards near the center of the Czech capital, Prague, in August. The Czechs might be renowned for their beer, but next month it will be all about wine as the country jubilantly ushers in the grape harvest season with numerous wine festivals throughout the month. (Michael Heitmann/Special to Stars and Stripes)

Let’s face it, beer festivals have become a little passé. Wine festivals, however, still carry a certain coolness factor. When organized properly, they have you feeling as though you’ve stumbled upon a slice of Shangri-La.

And if you’re looking for wine festival utopia, it isn’t difficult to find in Prague, a city full of hidden hillside nooks and unexplored vineyards.

The Czechs — much like the Germans — might be renowned for their beer, but in September it’s all about home-grown vino as the country jubilantly ushers in the grape harvest season with numerous wine festivals — or vinobrani — throughout the month.

While booking one of the private wine cellars that dot the South Moravian region for a weekend of debauchery may be a rite of passage, there is no shortage of bubbly — red, white or rose — in the Czech capital. When it comes to vinobrani, Prague goes all out, hosting a festival in one quarter or another practically every weekend in September. Celebrations range from the very grand (the Festival of the Grape in the Prague Castle gardens) to cheesy retail gimmickry staged in front of malls and grocery stores.

The best, however, are the neighborhood wine fests. Most district administrators are lax about promoting their vinobrani to the wider community, much less to throngs of tourists, so it’s mostly locals who know about these eclectic, slightly wild park or hilltop wine raves.

I’ve been in Prague for eight years now. The closest I’ve found to Napa Valley in Prague is Havlickovy sady. To those who live around here, this park is simply known as “Grebovka,” the nickname taken from the Grobe villa, a 19th-century abode in the park’s center. This expansive swath of land in the city’s upscale Vinohrady district is home to one of the largest working vineyards in Prague.

It also hosts one of the most popular wine festivals of the season, drawing hundreds of local revelers as well as a handful of out-of-towners who just happen upon this lively outdoor bash. This year, Vinobrani na Grebovce will be held Sept. 26-27. The Friday festivities will take place outside the park on namesti Miru before moving to Grebovka the following afternoon, where the crowds pack the hillsides surrounding the vineyard and the striking Neo-Renaissance villa, feasting on grilled meats, cheese and glasses of freshly produced wine.

The guest star at any proper vinobrani is a delicious mix called burcak, partially fermented, very sweet young wine that is exceptionally potent. It can be bought by the glass or, for those more daring, by the liter.

Pavel Bulanek, Grebovka’s main cultivator, says the vinobrani cuts into the heavy workload required by his vineyard, which covers nearly four acres below the Grobe villa.

“It’s a crazy action,” he said, laughing as he took a break in the afternoon heat along one of the stone walls lining the vineyard. Still, he’ll be on hand for the event. After all, Grebovka wine (the vineyard provides up to eight kinds each season) will be among the dozens of other Czech blends on offer this year.

As much as I wanted him to extol the charms of burcak, Bulanek is no fan, calling it “a PR action.” Asked, then, for a recommendation, Bulanek laughed again.

“The best wine we have,” he said, “are the ones that have already been bought by the customer.”

His cellar, Sklep Grebovka, is open every Friday year-round, as long as there is wine in the tanks, according to Bulanek, who can often be found behind the bar. The selection changes weekly. When we talked, however, Bulanek still didn’t know what Grebovka’s vinobrani menu would look like.

Other aspects of the event have already been revealed, though. The festival, for instance, will have a King Charles IV theme with a series of theatrical presentations on the history of Prague. A Beatles revival band is also on the lineup. Ales Pokorny, a leading Czech sommelier, will hold workshops on the fine art of wine-tasting. And of course, there will be plenty of vino, burcak and culinary delights. Best of all, entrance is free.

Not a bad way to wrap up the waning days of summer.

Julie O’Shea is a freelance journalist who lives in Prague. E-mail her at julie0616@gmail.com.

Accommodation• Czech Inn (Francouzska 76), rooms from 1,991 Czech korune (about $95). A five-minute walk from Grebovka, this hostel-hotel combo is located in a beautifully renovated house and offers private rooms, dorms and apartments. Its Basement Bar offers a buffet breakfast for about 120 koruna as well as nightly entertainment. Attracts young travelers and families. Telephone: (+420) 267267612; website www.czech-inn.cz.

Food Specialties such as raclette, sheep cheese and potato pancakes usually are sold at the fests. But if you want a more formal dining experience, here are some suggestions:

• Bruxx (Namesti Miru 9). If you are looking for something fancier, pop into Bruxx, next door to Parlament. Run by the same chef, the two spots may share a kitchen, but the wood- paneled Bruxx specializes in mussels and Belgium lagers. Telephone: (+420) 224250404.