Potsdam: Escape the bustle of Berlin with a stroll through Sanssouci 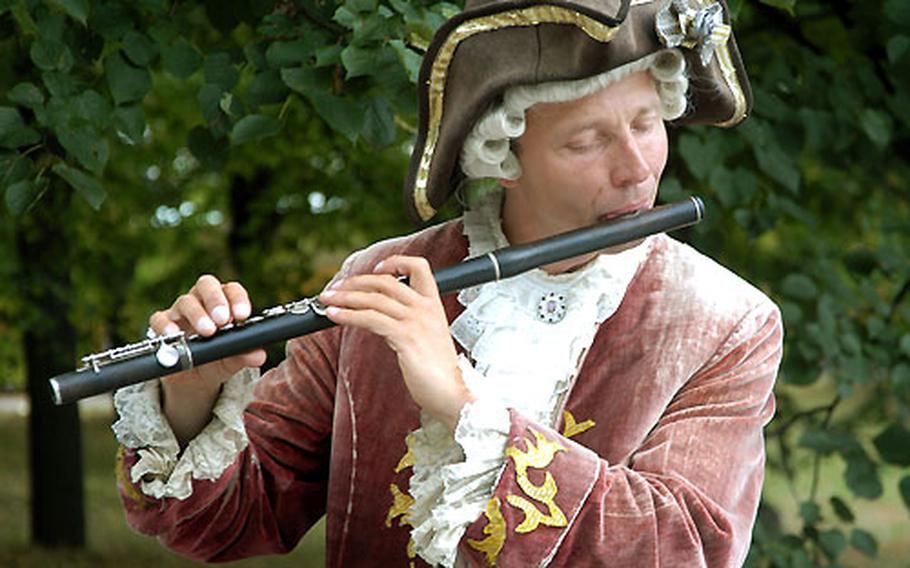 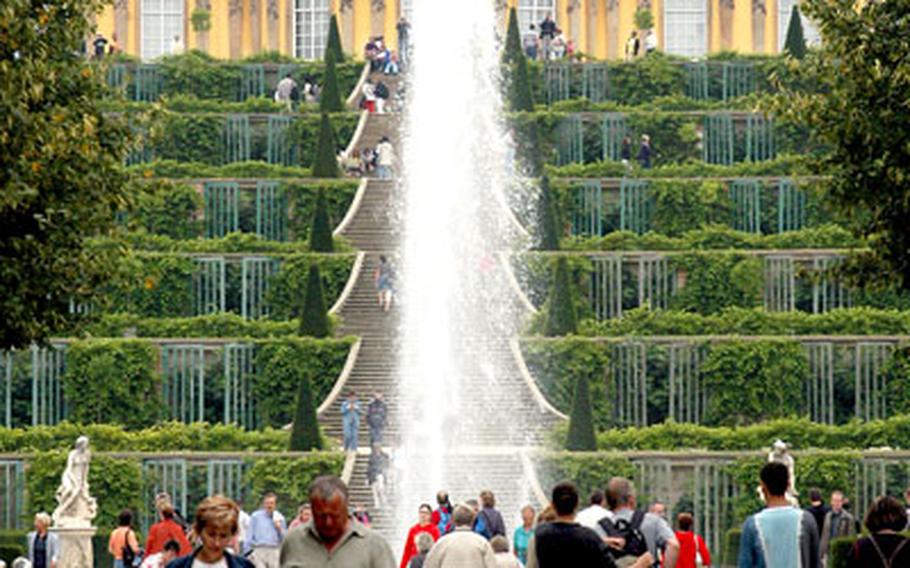 The Lustgarten,with its fountain and the steps and terraces leading up to Schloss Sanssouci. (Michael Abrams / S&S) 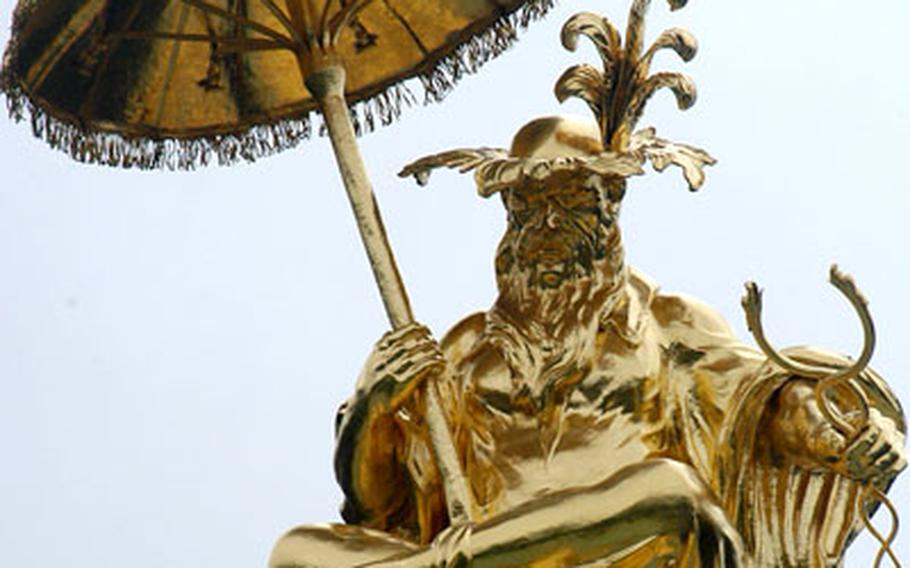 A gilded mandarin sits under a sunshade atop the Chinese tea house at Sanssouci. The tea house holds a collection of Chinese porcelain. (Michael Abrams / S&S) 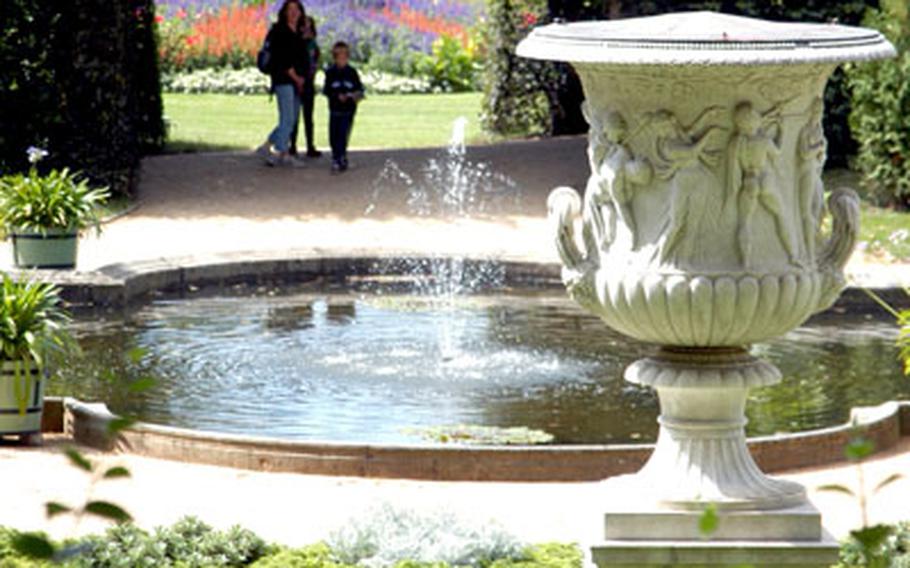 A view of the Sicilian Garden. (Michael Abrams / S&S) 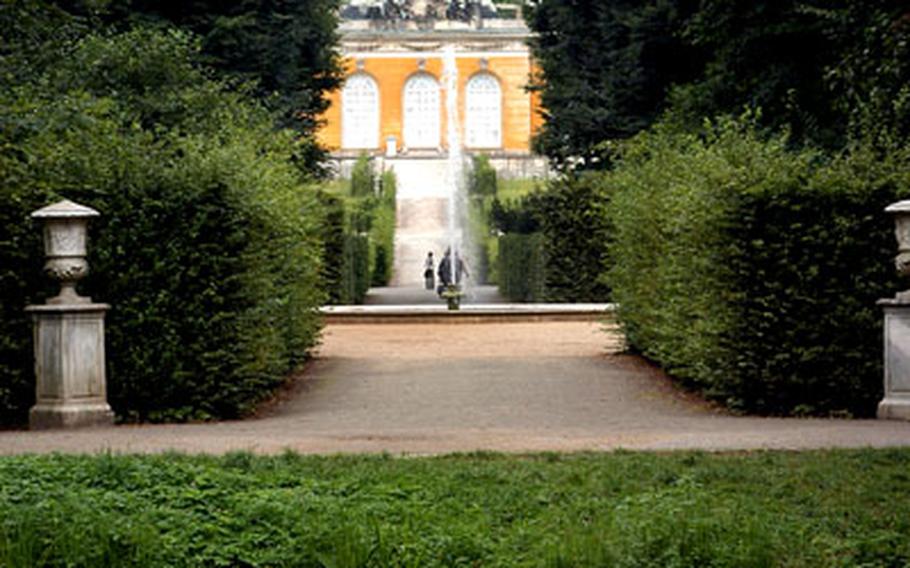 The windmill at Park Sanssouci is reflected in a canal running through the park. (Michael Abrams / S&S)

When King Frederick the Great of Prussia needed to escape from the trials and tribulations of ruling, he withdrew to Sanssouci, his summer palace in Potsdam.

Today, throngs of tourists make their way to Sanssouci, built between 1744 and 1860, to escape the hustle and bustle of the German capital, Berlin.

Sanssouci &mdash; actually &ldquo;sans souci,&rdquo; French for &ldquo;without a care&rdquo; &mdash; is a place where you could spend a day wandering carefree through its park, palaces and other buildings. &mdash; as long as you are wearing comfortable shoes.

Dotting the landscape of the huge park are palaces, gardens, fountains, statues, pavilions and a church. Much of it was built under Frederick, but his successors also contributed to the park&rsquo;s grandeur.

Most famous of its buildings is the one that gives it its name, Schloss Sanssouci, a small one-story palace with a Rococo facade decorated with playful figures. It was not built for conducting royal business, but rather for the king&rsquo;s pleasure. Today he has his final rest here &mdash; his body was brought to Sanssouci in 1991 and placed in a vault above the terraces of the palace.

The terraces, lined with fig trees and vines, cascade from the palace down to the Lustgarten, or pleasure garden, with its fountain. From here, the park&rsquo;s main lane, the Hauptalee, leads from east to west. To the east, it goes past the Holl&auml;ndischer Garten (Dutch Garden) with the Picture Gallery, housing the royal collection, in the distance. It leads on past the Neptune grotto, which is in dire need of repair, and the Friedenskirche, or Peace Church, to the giant obelisk at the eastern end of the park.

The Friedenskirche, with its Italian-style architecture, was built by the devout Frederick-William IV in the 18th century. He and Frederick III, know as the &ldquo;99-day Kaiser&rdquo; for the length of his rule, are buried here.

To the west, the Hauptallee leads straight to the monumental Neues Palais, or New Palace. This 700-foot-long palace is the largest building at Park Sanssouci, and was built for conducting imperial affairs. And maybe a little intimidation, being constructed by Frederick following the Seven Years War in 1763.

The building, crowned by a dome, is an imposing sight, but it has been said that the king didn&rsquo;t like it much and rarely stayed there. Others did though, and the last German Kaiser, Wilhelm II, lived there until his abdication in 1918.

If you head straight down the Hauptallee to the palace, you&rsquo;ll miss a lot of the other sights of Sanssouci. Off to the left (or south) is the Chinese teahouse, surrounded by gilded statues of Chinese tea drinkers and topped by a mandarin holding a sunshade. Today it houses a collection of Chinese porcelain.

Farther on are the R&ouml;mische B&auml;der, or Roman baths. Not really Roman, and not really baths, the building was constructed under Frederick-Wilhelm IV and used as a home for the royal gardener and as a place to remind the king of Italy, of which he was a big fan. Southwest of here is Schloss Charlottenhof, a palace Frederick-Wilhelm had built when he was the crown prince.

To the right (or north) of the Hauptalle are the historic mill, the Neue Kammern, used to house royal guests, and the Sizilianischer Garten, or Sicilian Garden. A little farther on is the Orangerie, another Italian-style building built by Frederick-Wilhelm IV. It was used to house the garden&rsquo;s sub-tropical plants in the winter and as a guesthouse for Czar Nicholas I and his wife, Alexandra Feodorovna, who was the king&rsquo;s sister.

On either side of the Hauptallee, just before you reach the Neues Palais, are two pavilions, the Antiker Tempel, or Antique Temple, and the Freundschaftstempel, Friendship Temple. And spread out over the whole expanse of green are many interesting statues, such as the equestrian statue of Frederick the Great, a statue of an archer, a pair of very female sphinxes and Cleopatra with Eros, just to name a few.

Wandering through Sanssouci and trying to see it all may leave you without a care, but your feet may not feel the same. You might think that Berlin, with its buses, subways and trams, is not so bad after all.

Where: Park Sanssouci is in Potsdam, the capital of the German state of Brandenburg. It is on the outskirts of Berlin, about 19 miles southwest of the city center.

How to get there: By car, heading to or from Berlin, take A115 and exit at Potsdam-Babelsberg and follow the signs to Sanssouci. By public transportation, take streetcar lines 96 and 98 from the Potsdam Hauptbahnhof (main train station) or bus 695, which also will take you past a lot of the sights of the city. From central Berlin, take S-Bahn line S7 to the Potsdam train station.

Costs: The park is free and so is the Friedenskirche, but there are entrance fees for everything else. Schloss Sanssouci costs 8 euros for adults, 5 euros for children (guided tours only). Entrance to the Neues Palais costs between 3 and 6 euros depending on which guided tour you take. Entrance to the other sights, such as the Chinese teahouse, the Orangerie, etc., costs between 1 and 4 euros.

A map of the park costs 2 euros and is indispensable since it shows all the parks paths and sights.

More information: Go to www.park-sanssouci.de for the park&rsquo;s Web site, or to www.sanssouci-sightseeing.de for Potsdam&rsquo;s. Both are in extensive but only in German. The site www.germany-tourism.de/e/castles_palaces_2816.html is in English but limited.